Unofficial Walt Disney World ‘Earbook 2011: One Fan’s Review in Pictures by Kevin Yee documents all of the changes and happenings at Walt Disney World in 2011. From the addition of new attractions, like Star Tours: the Adventures Continue, to photos from small test experiences, like the Wilderness Explorers Game, ‘Earbook 2011 is a comprehensive
Read More
Lady and the Tramp (Diamond Edition Two-Disc Blu-ray/DVD Combo) is the Spring 2012 release in the Disney “Diamond” line dedicated to restoring and re-releasing Disney animated classics on the Blu-ray format. It is the continuation of the Platinum line that saw many excellent DVD releases, and these spring and fall releases have become some of
Read More
When the Real Steel Two-Disc Blu-ray/DVD Combo first arrived for me to review, my initial thought was, “great, a movie about Rock ‘Em, Rock ‘Em Robots! Just what the world has always needed.” It turned out that it was actually more like one of my favorite episodes of the Twilight Zone. My pre-conceived notions about
Read More
Oh Captain! My Captain! Unlike Good Morning, Vietnam, I actually knew more about Dead Poets Society than this famous line. Dead Poets Society has long held a spot on my list of top films. Dead Poets Society centers around Todd Anderson (Ethan Hawke) beginning his first year at a prestigious Welton Academy in 1959 Vermont
Read More 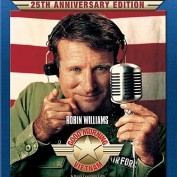 Goooooooooooooooooooood Moooor-ning, Viet-naaaaaam! Thanks to a few too many trips into the movies aboard the Great Movie Ride, Good Morning, Vietnam is probably the movie I quote the most despite never having seen. Suffice to say, after quoting that line for so many years, I was quite pleased to finally pop in the Good Morning,
Read More 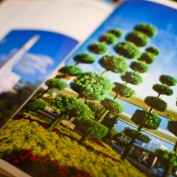 Everything after this sentence of this review is superfluous: this is one of the best Walt Disney World books on the market, and given its size, photo quality, and low price, any Walt Disney World fan would be a fool not to purchase it. Head over to Amazon right now where it sells for $20
Read More
Think of it as a precursor to Soarin’ Over California. Now, at twenty years old, The Rocketeer: 20th Anniversary Edition Blu-ray actually looks better than Soarin! The Rocketeer debuted in theaters in 1991 (hence this being the film’s 20th anniversary), when I was the ripe old age of six. I remember being really excited about
Read More
Disney Universe allows players to suit-up for action as some 40-different Disney characters including characters from TRON and Pixar films! The concept of the game is pretty simple, as it’s basically a good versus evil platform-explorer game. Disney Universe’s interactive environments are computerized versions of some familiar worlds from Disney animated (and a few live
Read More
The term “instant classic” gets thrown around fairly recklessly, but in the case of Disney’s Prep & Landing, I think it safely describes the CG animated-special’s place among Christmas favorites. When our review copy showed up, I was so excited to see this special again that I watched the DVD all the way through (special
Read More 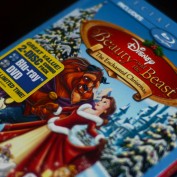 This movie is nothing compared to the original. If you’re the type who appreciates the art of hand-drawn animation, this movie is not for you. The story is dumbed-down, the animation is sub-par, and there are several portions that seem like cheap attempts to draw laughs from kids. That said, not everything is targeted at
Read More 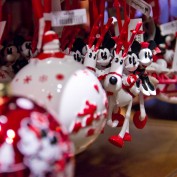 Need help shopping for that Disney fan in your life? As people who love to buy things, we’re here to help! In recent years, we’ve switched almost exclusively to online shopping. Well, I have. Sarah still likes B&M stores for clothing, but I think it’s more difficult to purchase women’s clothing without trying it on.
Read More