Kinect Disneyland Adventures came out yesterday, November 15, 2011, and initial reviews are fairly positive. We received our copy yesterday, and although we had only a few minutes to play (darn you, packing!) after finally getting the game set-up, it seems solid. We will have a full review next week, but for now, here
Read More
Jaws 3. Jurassic Park 3. Rambo 3. Heck, even Pirates of the Caribbean 3. Usually, the third installment in a film trilogy is where the wheels fall off. Where movie studios that want to capitalize on the success of a great first film, and possibly a deserving sequel, get greedy and want to cash-in on
Read More
Sleeping Beauty was Disney’s first animated classic to be released as a Platinum Edition Blu-ray. Although subsequent releases escalated in status to “Diamond” edition (wait, that is better than platinum, right?), there is nothing subpar about this release. Some who follow Disney animated releases, myself included, were a bit surprised that Disney would choose this
Read More
Everyone knows Beauty and the Beast is an awesome movie. There’s no sense fixating on its excellence. It was released during the “Disney Renaissance” of animated films. It was the first animated film ever nominated for Best Picture. In short, if you take issue with the substantive quality of this film, there’s something wrong with
Read More 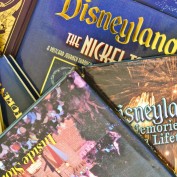 One of my favorite things to collect is Disney-produced books that you would find for sale exclusively in the theme parks. I find them to be the perfect thing to lounge around and read outside on a lazy Saturday, something to peruse on the plane, or even something to set on the coffee table. Looking
Read More