After the Pirates of the Caribbean Helmsman, this is the most difficult-to-photograph dark ride scene in all of Walt Disney World. Capturing a good shot of the caretaker requires great timing, great manual focusing skills (or great luck with auto-focus!), fast lenses, and a camera capable of clean high ISOs. The last point is especially
Read More
If you’ve ever been to Indiana Jones Adventure: Temple of the Forbidden Eye in Disneyland, you know that this is one of the coolest queues of any attraction anywhere. You also know that it’s pretty dark. Luckily, on our recent trip, a Cast Member let us linger in this area as the attraction closed so
Read More
Grand Floridian Resort & Spa, Walt Disney World’s flagship resort, is an incredibly gorgeous sight, no matter if it’s viewed at night or during the day. During the day, it’s gorgeous red roof is complimented wonderfully be the bright blue Florida skies, and at night, it’s lit-up reflection shines beautifully when viewed across the Seven
Read More
Pirates of the Caribbean is one of my favorite Disney attractions. While I prefer the version of the attraction at Disneyland to the version at the Magic Kingdom in Walt Disney World, the Magic Kingdom’s exterior is definitely better. Nothing against the New Orleans Square charm of Disneyland’s version, I just prefer the look of
Read More
I’m not exactly pleased with how this photo turned out compared to what I envisioned, but I do like the presence of the two Cast Members on the right. They really gives the Castle scale, I think. What do you think of today’s photo? Let us know by leaving a comment or giving it a
Read More
Continuing on “fireworks week,” here’s a photo from last summer’s fireworks show at Walt Disney World, called “Summer Nightastic Fireworks.” This show was a modified version of the display that ran a couple of years earlier at the now defunct Pirate and Princess Parties. As the show was originally created for a hard ticket event,
Read More 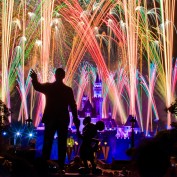 Disneyland and Walt Disney World show a number of fireworks shows on an almost nightly basis. At Walt Disney World’s Magic Kingdom, Wishes! is the main show with HalloWishes and Holiday Wishes! shown seasonally. Epcot also gets in the fireworks act, with the beautiful Illuminations. Disneyland’s main show is called “Remember… Dreams Come True,” and
Read More
In Disneyland, this attraction is called “Astro Orbitor.” In Walt Disney World, it’s called “Astro Orbiter.” See the difference? Does California use a different corpus than Florida? Was this accidental? Was it completely intentional and the result of an intricate backstory written by WDI of which I’m unaware? These are the kind of things that
Read More
The “Rope Drop Dash” from Main Street to Peter Pan’s Flight is always fun, but adding a taking photos while moving to the equation makes things a little more interesting. On this day, even after grabbing a few photos at Partners and in Fantasyland, I was the second person on Peter Pan’s Flight! What do
Read More
When you leave your camera’s shutter open for thirty seconds, your camera picks up things that your eyes simply can’t see. Like clouds move. Or the deep blue hue of the dark night sky. I love capturing these “false” realities visible only to the camera in the nighttime sky. One thing the camera didn’t pick
Read More
Here’s a sneak peak at one of the many photos of Richard Sherman performing at D23’s Destination D at Walt Disney World Resort that will appear in today’s installment (part 17) of the Coast-to-Coast Disney trip report. I assume I don’t need to tell you who the bearded man and yellow-shirted fella standing in front
Read More