At Space Mountain, a rocket-ship blasts off after the recent refurbishment to the attraction that brought in a new queue, some new effects, and an impressive new post-show. While the refurb didn’t bring exceptional on-ride audio, on-ride audio was added a few months later.
Read More
Nothing is quite as special as closing time in Walt Disney World’s Magic Kingdom. Although Walt never walked this sidewalk, the place takes on a new life at night, at a time when you can really feel “close” to the history of the park and its founder’s legacy.
Read More
Spring is a beautiful time at Epcot in Walt Disney World. The topiaries and flowers are in full bloom as Epcot comes to life with vibrant colors and excellent demonstrations from HGTV and other horticulturists.
Read More
Time to kick your Friday off with a bang! There is nothing quite like a Magic Kingdom fireworks show, and of those shows, the Summer Nightastic! Fireworks were about as good as they get. Filled with perimeter bursts and an astounding Castle battle that caused the Castle to burst into flames, the Summer Nightastic Fireworks
Read More 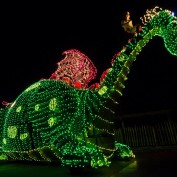 Although I prefer the wonderful music and color-changing floats of SpectroMagic, I was delighted when Main Street Electrical Parade came to Walt Disney World in 2010. I don’t remember its previous runs in the Magic Kingdom, and something new to photograph is always a treat. Plus, with incredible floats like the “disappearing” Elliot, the Main
Read More
Arriving at Walt Disney World’s Magic Kingdom at least thirty minutes before park opening is a special feeling. You have the anticipation of the day to come, plus you can hear the brilliant entrance area background music play as everyone is excited to start their day. The Welcome Show is the icing on the cake,
Read More
Cinderella Castle at the Magic Kingdom is the most photographed icon on earth for good reason – it’s absolutely gorgeous. Whether you’re a casual tourist visiting Walt Disney World Resort for the first time, or an experienced photographer looking to avoid the typical “tourist” photos, it’s difficult to resist the photogenic allure of Cinderella Castle.
Read More