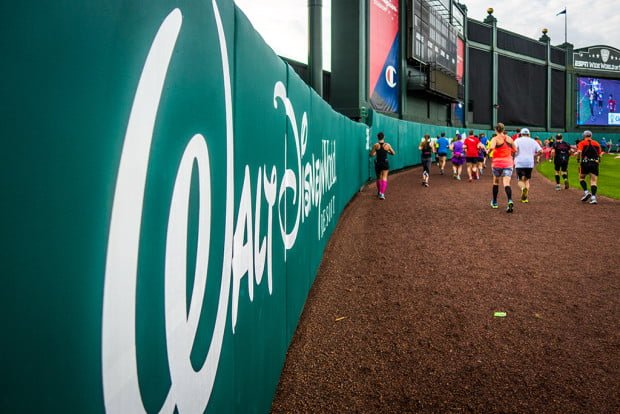 Before we dig into the second half of the 2016 Walt Disney World Marathon, I want to revisit the topic of entertainment cuts during runDisney events, because that generated some interesting feedback here and on social media. I want to start by saying I love runDisney. I think it’s exceptionally managed and largely a showcase of Disney at the top of its game.

Still, cuts bother me because they are a potential harbinger of things to come. I mentioned in Part 1 of the Walt Disney World 2016 Marathon Race Report that runDisney could be in the red and still be hugely profitable for Disney. Elaborating on that, like many large companies, the various business units within Disney bill one another internally for services rendered. At some point, internal billing from Entertainment, Operations, etc., in addition to overhead could be greater than the entry fees for the races. RunDisney entry fees are pretty high, so I’m guessing they don’t, but let’s just assume for the sake of argument that runDisney events–in isolation–lose money on paper.

The problem is, that doesn’t account for the indirect revenue driven by runDisney. January is typically a slow month at Walt Disney World, and yet hotels are near full occupancy over Marathon Weekend as compared to the following week. Given hotel rates, I’d hazard a guess that these bookings (and park tickets, dining, merchandise sales…) are far more important than entry fees in terms of runDisney’s impact on the overall bottom line. To my knowledge, there’s no clean way of attributing this indirect revenue to runDisney when evaluating the business unit on paper.

Years ago, Disney did not evaluate each business unit in isolation and treat them as de facto competitors with one another. It didn’t matter if something like The Adventurers Club lost a bit of money, because overall, it positively affected guest satisfaction. Evaluating units in isolation is a problem, and one that if carried to its natural conclusion would stifle the development of wow-factor E-Ticket attractions because they don’t directly generate enough revenue to justify their investment.

Specific to runDisney, it’s a problem because these events are often held in the off-season, and have a loyal demographic that travels, often with a decent amount of disposable income. This is a juicy demographic, and one I’d think Disney would not want to disillusion with the product by nickel and diming on-course entertainment simply for the sake of that unit, in isolation, appearing more profitable on paper.

This is a reductionist explanation, and I’m not contending we’re at this point yet. I’ve really enjoyed every runDisney event I’ve done, and registration for these events fills quickly. However, it does concern me when I hear from friends who have been doing runDisney events for a while that the quality is declining. I’ve seen this trend play out at Walt Disney World (thankfully, I think we are seeing a shifting tide) to the detriment of guests and the parks’ long term business health.

I bring all of this up because I don’t want to see the same thing happen with runDisney in the name of short term profitability. Disenchantment among the hardcore runDisney fans would be far more debilitating than the added costs for a bit more on-course entertainment. Everyone has a tipping point in terms of value-for-money, and I want to be running these events when I’m 50, so I don’t want to reach my tipping point anytime soon.

Consider this a rambling cautionary tale for runners to consider when completing your feedback surveys, more than anything else… 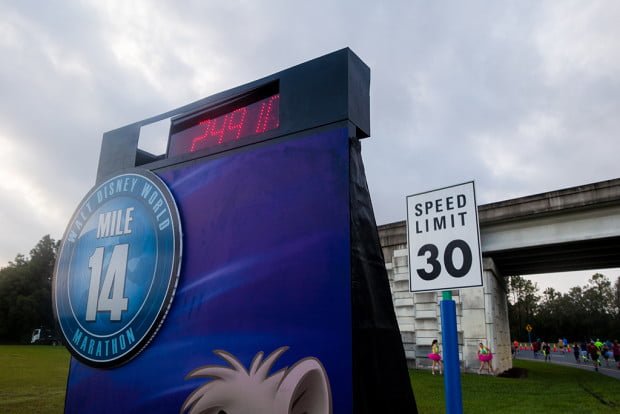 And now, back to your regularly scheduled boring stretch of Marathon course. 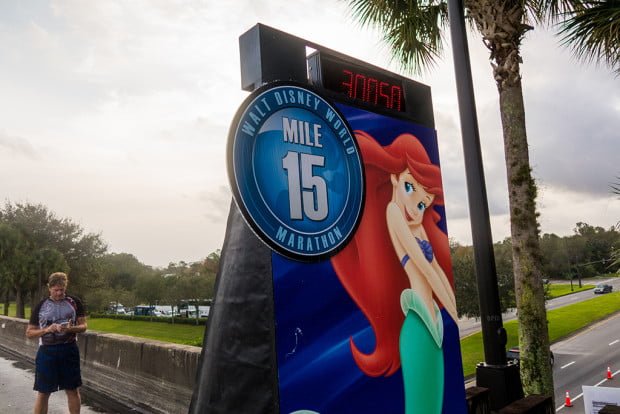 By this point, my per-mile times were creeping up above the 10 minute mile mark. 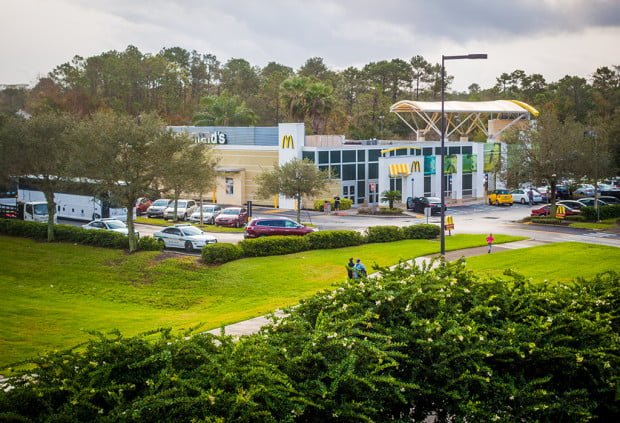 Until I saw it. Like a beacon of light in a desolate landscape, it beckoned to me with the promise of a deliciously greasy breakfast that would drown out my running sorrows. 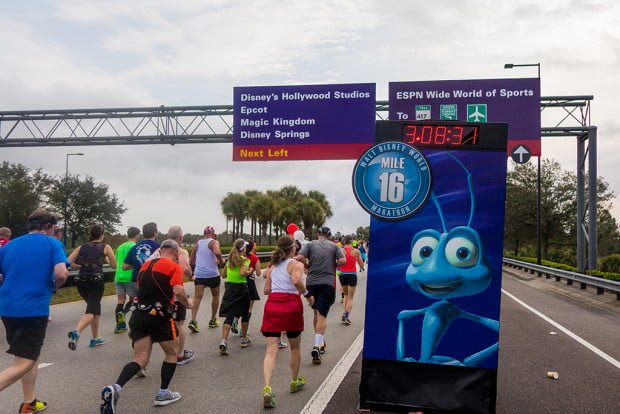 …and somehow that motivated me to have my best mile of the race if the time above is to be believed (I’m not so sure it was totally accurate). Actually, it wasn’t the McDonald’s at all. It was my stubbornness in trying to catch up to and keep pace with that 4:45 pace balloon (which would guarantee me a sub-4:30 finishing time since I started about 25 minutes after the 4:45 pace). 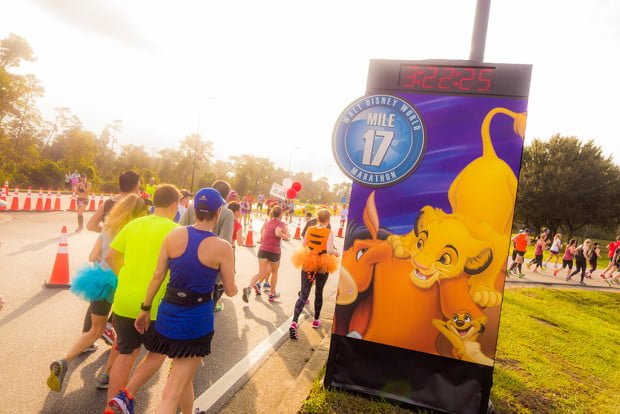 I kept pace with them through Mile 17, as we headed into the ESPN Wide World of Sports. (Why I think the Mile 16 time was inaccurate is because there’s no way a ~14-minute mile would be a 4:45 pace.) 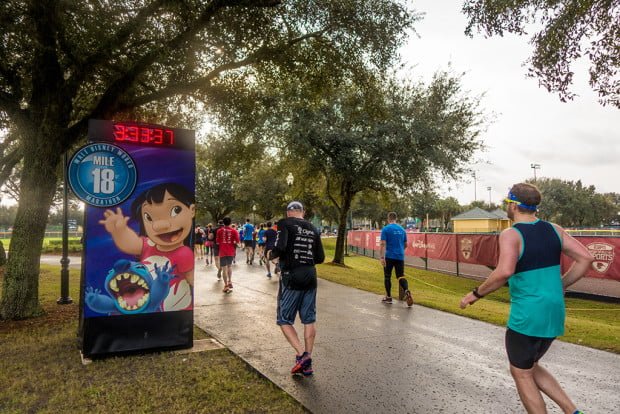 The wastewater treatment plant and Wide World of Sports have a contentious battle going for the crown of “worst stretch of the course.” To its credit, Wide World of Sports has interesting sections, including the track and baseball diamond, but its downfall is that you spend approximately 16 miles running through the WWoS, or so it feels.

Many a runner has gone insane during this stretch of course, only to be found weeks later curled up in the fetal position in a clubhouse muttering, “it. never. ends.” 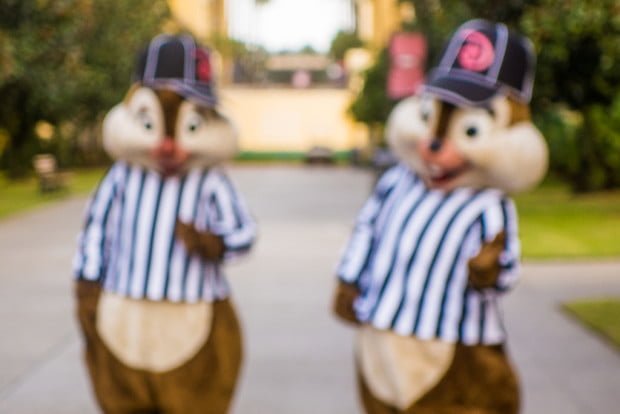 Another fine photo demonstrating my photographic prowess during the race. 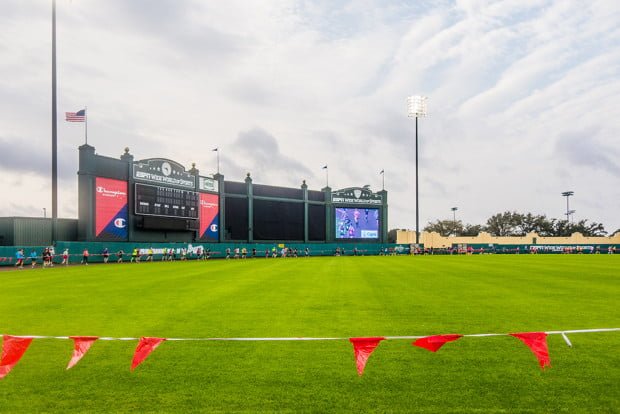 It’s really difficult to convey just how terrible the Wide World of Sports stretch of the course is in photos, since there are stretches that look cool.

The baseball field is the best example of this, and it is cool. People cheering in the stands and just the act of running around the field is fun and gives you a jolt of energy. 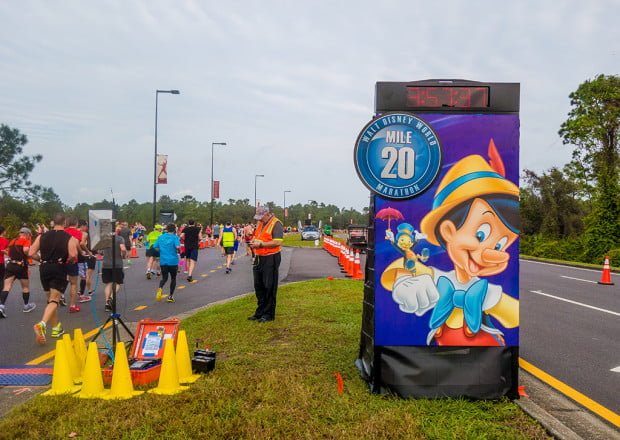 It’s just the sheer number of miles that late in the race that makes it unpleasant. Cutting down the WWoS section to <2 miles and running farther along the highway with entertainment along the way would be better. 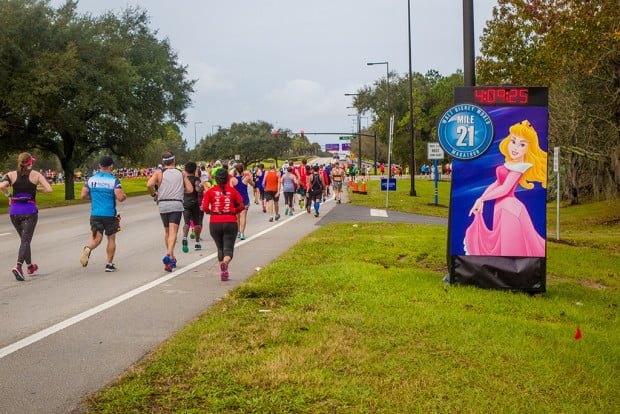 As you can see, my times were really starting to balloon. At this point, I was beginning to worry that I wouldn’t finish in under 5 hours–under 4:30 was already totally off the table. 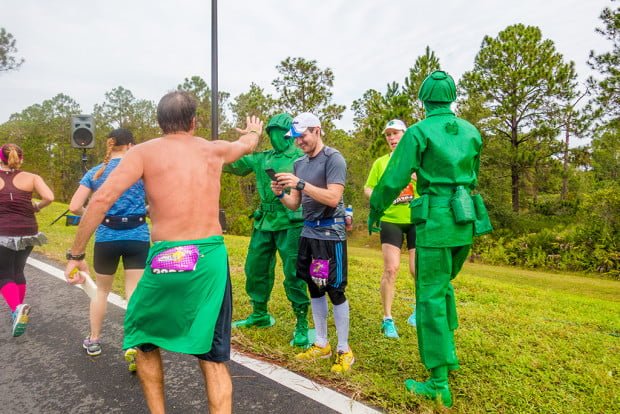 You might wonder why I took a photo of the backside of a shirtless dude, but I say, WHY NOT?! 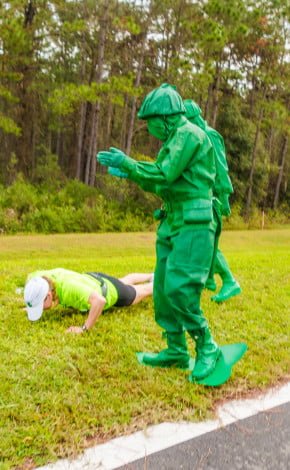 Actually, it’s because this lady was next to the shirtless dude, and wanted to take a selfie with the green army man. He let her, but made her do pushups for stopping. At that point, if I bent down to do pushups, I wouldn’t have been able to get up, so huge kudos to her for being a good sport. 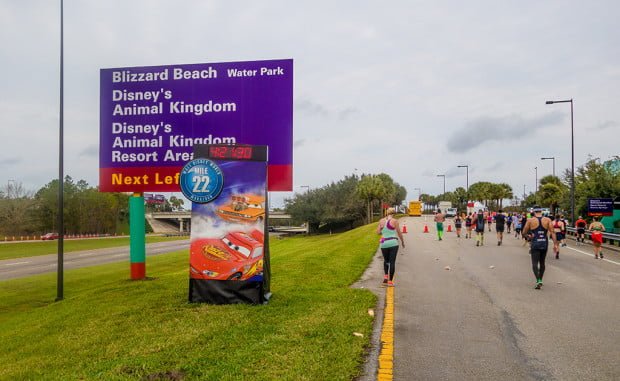 Knowing we were close to entering Disney’s Hollywood Studios and the home stretch, I picked up my pace and did the next mile in “only” 11 minutes.

Okay, on the next page we’re in the home stretch, where things actually good. It’s not just a bunch of my crappy photos of mile markers, so if you’ve already tolerated this report to this point, don’t give up–it gets better, I swear!