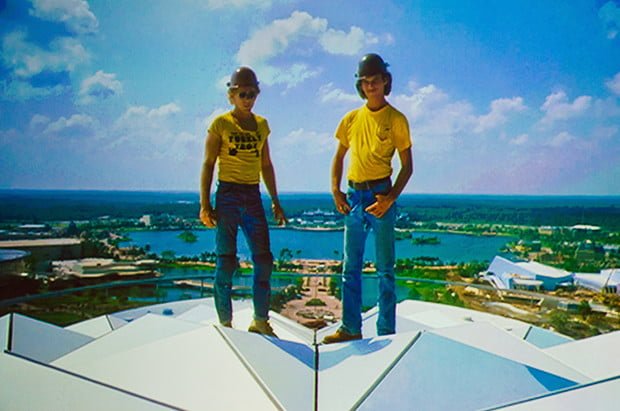 Happy Anniversary, EPCOT Center! On October 1, 1982, Walt Disney World opened its second park, which remains the most revolutionary theme park of all time. We’ve waxed poetic about the significance of EPCOT Center many times here, so I thought it’d be fun to do in a totally different direction: reflecting on some of the more eccentric moments from Epcot’s history.

What’s often overlooked by fans like me who treat EPCOT Center with such reverence is that there are some truly irreverent parts of its past. Part of this is just standard-issue 1980s weirdness, other elements likely crept in even during those early years as Walt Disney World sought to push back against any claims that EPCOT Center was too dry or boring. No doubt, some of this would make Robert Alan Epcot roll in his grave.

1980s versions of the future are definitely how we got things like the Astuter Computer Revue, whereas the quest for kid-friendly relevance probably explains things like Barbie’s Birthday Bash. Then there are long-forgotten things like Kristos–visiting alien contortionists–that “entertained” park guests in the aughts, that really defy categorization.

Before we dig into the list, I want to share a photo project we undertook 5 years ago in honor of EPCOT Center’s 30th Anniversary. That was in the blog’s infancy, so many of you might’ve missed it. We asked readers to submit their photos from the glory years of EPCOT Center, and everyone delivered in a big way, submitting over 1,000 EPCOT Center photos from the 1980s and 90s. I then organized those photos into posts, some of which contain 100+ vintage photos. Each post will open in a new window…

There are a ton of fun, funny, and unique photos in those posts, so definitely check them out if you have never seen them. And another thanks to everyone who helped with that project. Hard to believe that was 5 years ago!

Barbie’s Birthday Party – Just watching the opening moments of that video above, you can tell “EPCOT ’94” is a park with an identity crisis. Rather than having this hosted by tween girls jumping out of a pink limo, it’d be more fitting if the video opened with a middle aged balding dude rolling up in a pink Corvette. Apparently, the same people who thought it’d be a good idea to give EPCOT Center a hip edge by appending the year to its name deemed that park the perfect place for Barbie to have her birthday party.

The above video is actually a promotional VHS tape that was sold for a penny with purchase of select Barbie dolls, which is itself really something. The main component of Barbie’s Birthday Party at EPCOT ’94 was the Magical World of Barbie, a stage show held in the American Gardens Theater, which is the same venue where Candlelight Processional, a solemn and dignified retelling of the Christmas story, is performed.

There was none of that in the Magical World of Barbie, a high-energy dance show in which Barbie and scantily-clad hip-hop dancing friends doing aerobics and such. Before you cry that this doesn’t fit Epcot, Barbie and her friends did travel around the world during the course of the show, and Barbie was the worldwide “Ambassador of Friendship.” Who knows, maybe Barbie also visited Epcot as a kid?

Billed as a “cosmic thrill show, like no circus in the universe,” Daredevil Circus Spectacular featured both outer space and international motifs because of course it did. The show included elephants (err…”elephant-like Martian Mastodons”), acrobats, motorcyclists, the Wheel of Destiny, a tightrope walker, trapeze troupe, and Disney characters in cosmic attire. If all of that sounds confusing, you’re not alone in that reaction.

It’s accepted wisdom that Michael Eisner did not like or understand EPCOT Center, and felt it was a drain on the Walt Disney Company during his early tenure as CEO. My theory is that Eisner was a huge fan of the circus, and demanded that the nascent park add one so it’d appeal to him, personally.

From there, Imagineers were left to pick up the pieces, someone adding this with thematic integrity, which resulted in the whole intergalactic thrills combined with an international cast. I’m still not sure why outer space is a stand-in for the future, but hey, it was the 80s. Reading the press release for the show is a bit of a trip in itself. 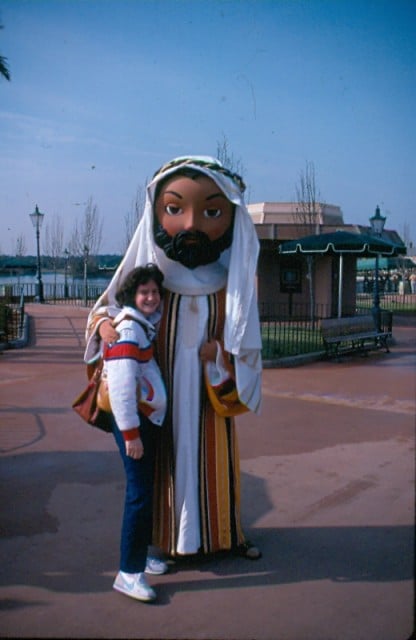 Children of the Corn World Showcase – Known as the “EPCOT Pageant Dolls” or “People of the World” characters, not a ton is known about these walk-around characters from the early days of EPCOT Center. Thanks to reader Patricia B., our EPCOT Center Vintage Characters post is filled with several great photos of them, but not much is otherwise known.

We also know that they were recycled from America on Parade, a bicentennial parade that ran in Magic Kingdom. Presumably, someone thought it’d be a good idea to re-outfit those characters for World Showcase, and have some ‘it’s a small world’ characters in real life. It’s pretty easy to see why this experiment was short-lived.

Splashtacular – I’ll be honest with you–I think Splashtacular was awesome, and I’d totally be down for a show like this again. The video above is from the Disney Channel, and I’d recommend giving it a watch. In case you’re not (yet) interested, let me entice you: Splashtacular featured the Fountain of Nations, alien/dinosaur/space action involving the robotic Terrorsaux, and a plot that feels like a precursor to Fantasmic. I love that it uses a remix of Tokyo Disneyland’s 10th Anniversary song as its theme song, too.

Speaking of splashes and Tokyo Disneyland, it surprises me that Walt Disney World doesn’t borrow another note from the Japan parks and have a summer festival akin to those at Tokyo Disneyland and DisneySea, both of which have shows that heavily feature water and soak guests. It’s a way to escape the summer humidity (which isn’t even as bad as it is in Florida) and guests really love it.

The Kristos – In the grand scheme of things, a troupe of contortionists probably wouldn’t register as one of the weirder things to appear at EPCOT Center over the years. However, when that group is pitched as “Visiting Alien Contortionists” and starts out each show with ominous music and an introduction, inviting guests to meet Epcot’s newest [long pause] visitors. I’d say, yeah, it makes the list.

Despite this being one of the newer entertainment acts at Epcot to make the list (their run ended in 2006), not much is known about the Kristos. There are only a handful of videos on YouTube, and by the looks of it, their show changed over its run, with the performers originally coming out with full-body spandex and alien faces, and that later changing to exposed faces (my guess: the alien faces coupled with the music scared kids). We don’t recall ever seeing this supernatural show, and that will haunt us until the end of our days.

Astuter Computer Revue – Owning the distinction of being the first original EPCOT Center attraction to close, lasting just over a year until its demise in January 1984, most fan knowledge of this attraction comes from D23 events. It’s one of those attractions that sounds good in theory: it had a Pepper’s Ghost special effect, showcased the impact computers could have on society, and even featured an original song by the Sherman brothers. What’s not to love about all of that?!

Based on accounts of those who saw it or worked at EPCOT Center during its early years, the actual show left a lot to be desired. It was also likely a bit too cutesy about a piece of emerging technology that was starting to have a significant impact on modern living. Fortunately, the Sherman Brothers song survives; as with all of their songs, its quite catchy and conveys the tone of the attraction.

Cirikli: The Wandering Stilt Birds – This nomadic troupe of birds traveling World Showcase looking for a place to nest looks a lot like a precursor to the beloved Tapestry of Nations parade for the Millennium Celebration at Epcot.

This is a bit odd, but I think it’s odd in a good way, one that largely works at Epcot. Entertainment like this adds character and charm to the park, and has a flair of eccentricity that enhances Epcot. As with Tapestry of Nations, I’d be perfectly happy seeing these birds make a comeback.

Canada Lumberjacks – I don’t know about you, but when I think of experiencing the culture of the world, the first thing that comes to mind is Duck Dynasty. World Showcase finally realized this vision of culture with Duck Dynasty: Canuck Edition.

While this show was only retired a couple of years ago (unfortunately, it’s forever burned into my memory), it already has earned a place in Epcot history as bizarre. The show featured the Paul Bunyan Lumberjacks, a group of Floridian performers, doing the kind of competitive ‘extreme’ lumberjacking you might see at 2:30 a.m. on ESPN2.

In addition to the athletic lumberjacks of the group, there was a rotund emcee, who provided dull-witted comedy and oddly-placed messages of conservation. In addition to the show being offensively bad and pandering to the lowest common denominator, it was obnoxiously loud, and could be heard all the way across World Showcase lagoon. For more of the weirdest offerings in EPCOT’s 3-plus decades of history, continue reading on Page 2.