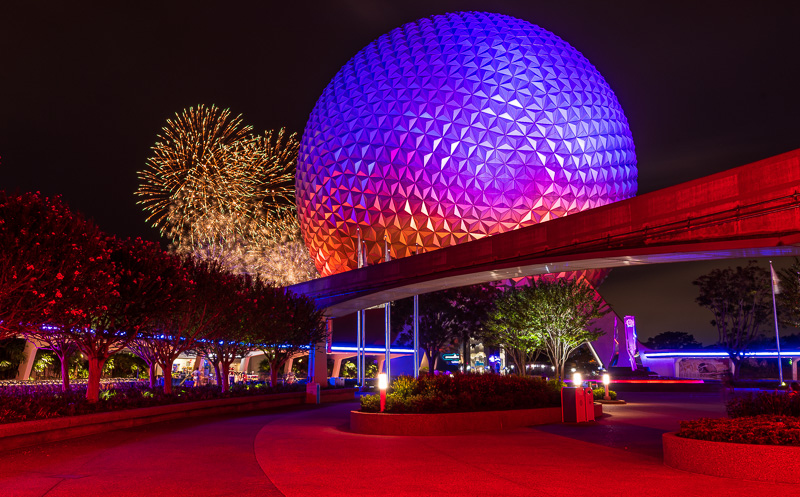 It’s time for another EPCOT update! This Walt Disney World park report will offer photos & commentary about construction progress, the latest on Lightning Lanes and the Genie+ system, Harmonious viewing locations, a look inside Creations Shop and Club Cool, the new Fab 50 statues, and more.

A couple of fairly significant developments have occurred within the last couple of weeks. First, Creations Shop and Club Cool opened. Both opened in what was previously MouseGear, with the temporary incarnation of that store closing. Along with Creations Shop and Club Cool, a walkway from Future World East now connects Mission Space and Test Track and these stores, with the old Innoventions Breezeway reopening.

Second, Space 220 Restaurant opened this past week. We rope dropped Epcot several days this week for the sake of scoring reservations, and have already shared Photos & Video Inside Space 220 Restaurant as well as our Space 220 Lunch Review that looks at whether the food is worth the $55 price tag.

We’ll have a dinner review sometime next week and a lounge review sometime after that–probably in October after the initial 50th Anniversary excitement subsides. Suffice to say, we’re fans of Space 220. It’s one of the most EPCOT Center things added to the park in ages, and will likely be the most popular and hard-to-score ADR in all of Walt Disney World for the next few years. 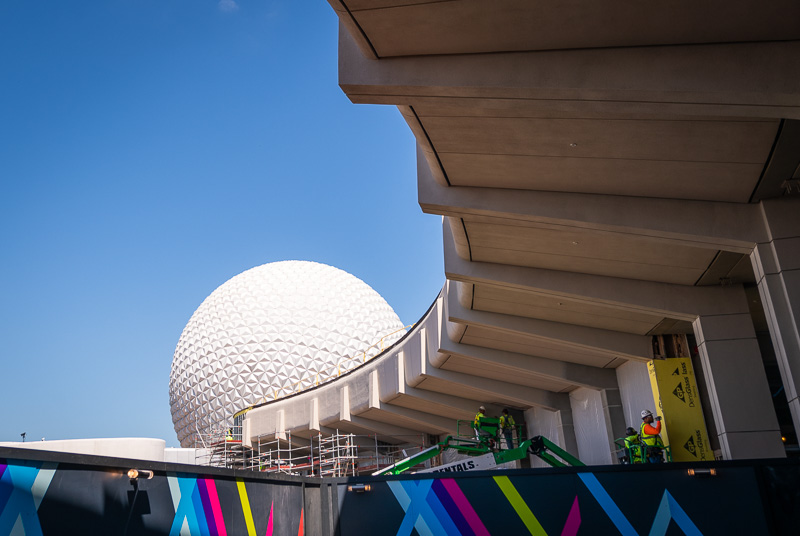 One of my ‘most anticipated things’ at Epcot is the opening of the unnamed restaurant replacing Electric Umbrella. Above is a look at construction progress on this location, which has seen a flurry of activity in recent months. It’s difficult to see inside, but it looks like it probably won’t be ready before 2022.

Once this restaurant opens, so too should a path connecting the front of the park with World Showcase. While the Epcot Dirt Pit™️ probably won’t be filled until 2023 or 2024, a direct route between Spaceship Earth and Creations Shop would be greatly appreciated. It still annoys me that no work was done on this during or in the months after the closure. The current maze of construction walls are an eyesore, and make for quite the end-of-night trudge back to the exits. 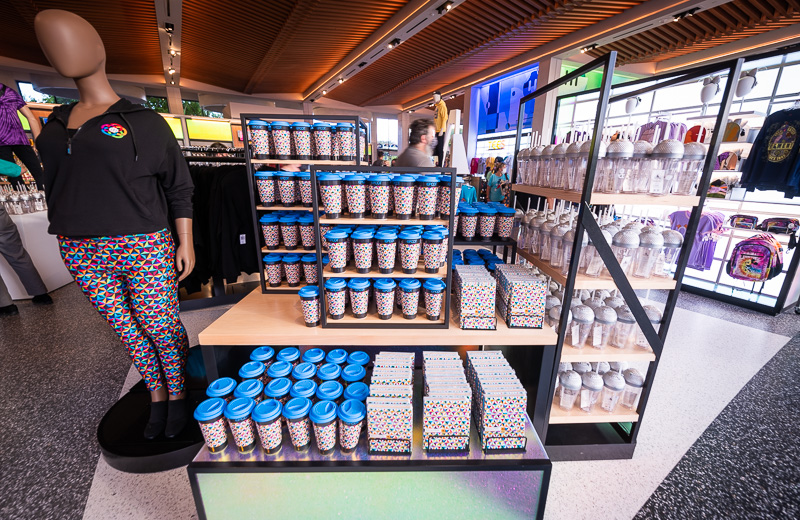 On a more positive note, I was pleasantly surprised by Creations Shop.

Don’t get me wrong–the name is stupid and so too were the obsessive updates on every boring detail about its design. 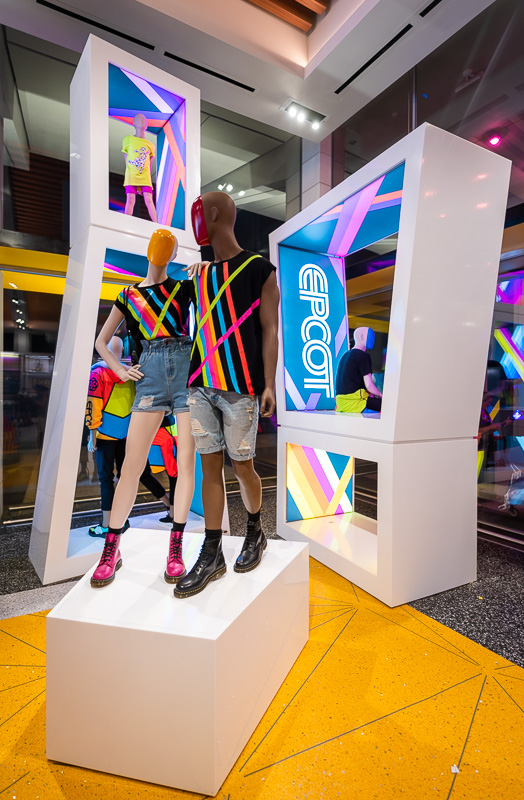 Creations Shop is nothing special, but it’s not awful either. I’d call it “aggressively average,” with a level of hype that makes no sense for what is essentially a very basic store.

However, it’s not as bad as MouseGear. I know a lot of fans suddenly have a wistfulness for MouseGear, but that’s how nostalgia works. MouseGear was cluttered and a visual hodgepodge–a clear vestige of the 1990s transformation of EPCOT Center into Epcot. 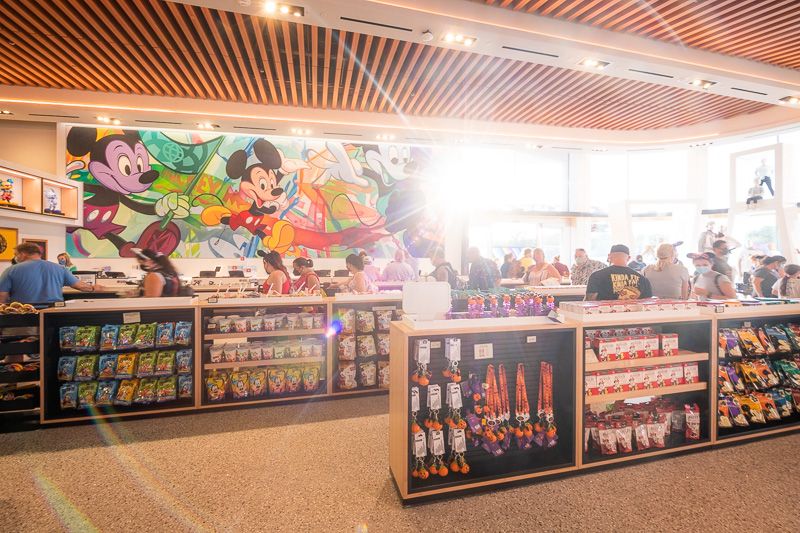 At the very least, Creations Shop is not that. It’s open and airy, with floor to ceiling windows that offer big views of Spaceship Earth and (eventually) whatever becomes of the Epcot Dirt Pit.™️ It’s bright thanks to natural light and easy to navigate–a big plus for people like me who get frustrated with the claustrophobic quality of so many Walt Disney World retail locations.

For everything that has been said about the dull design of Creations Shop, at least Imagineering didn’t use their go-to style of “rustic hipsters move into an old barn and find some eclectic decor on clearance at Anthropologie” for it. 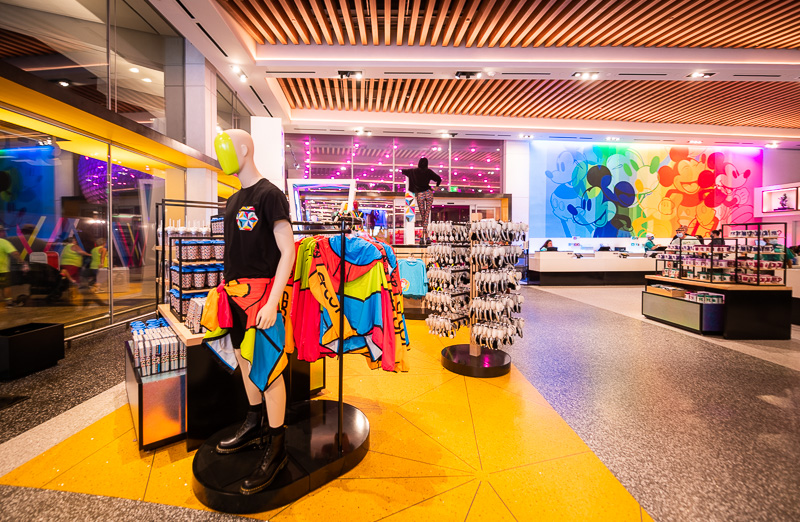 It still confounds me that Disney didn’t go with distinctly Epcot art for Creations Shop. For all of the lip service paid to the park’s rich history and creative legacy, it’s surprising they wouldn’t feature OG concept art or nods to EPCOT Center’s past.

Throwing longtime fans a superficial bone here seems like such obvious low-hanging fruit that in no way would’ve negatively impacted sales. It’s very telling that they still had to go with Mickey Mouse for the store’s visual identity. 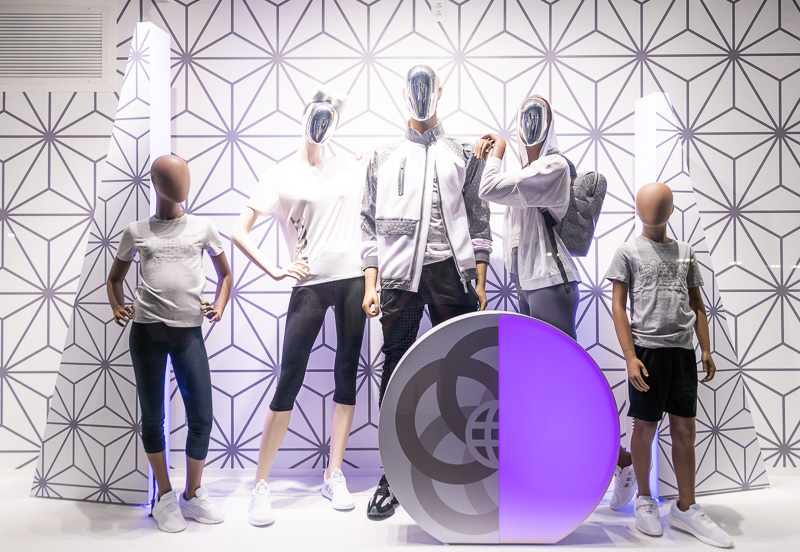 On the plus side, there is a ton of cool merchandise, some of which is actually hip and subtle.

Also, I’m a big fan of these metal faced mannequins. They remind me of Robert Patrick in Terminator 2. That’s high praise. 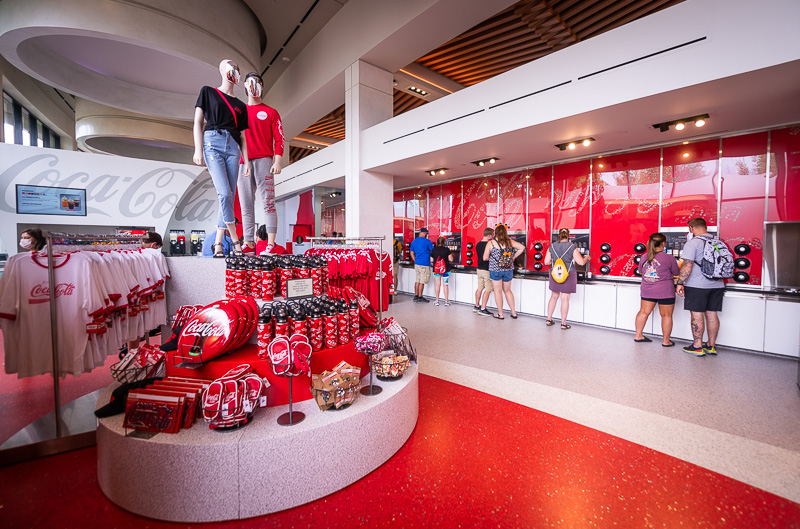 We finally got into Club Cool, waiting only ~10 minutes on a recent weekday when the line was barely outside the building.

On all other recent visits, the line for Club Cool has been significantly longer. I doubt that’s going away anytime soon, so if you’re visiting in October through December, expect to wait a bit. 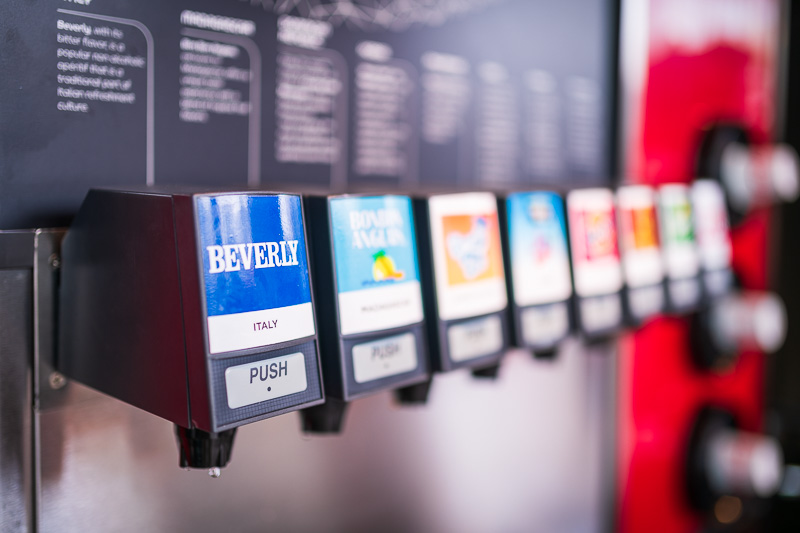 Thankfully, the best drink at Club Cool has returned.

If you’ve never tried it, you’ll absolutely want to give Beverly a taste. Be sure to take a big drink and swish it around in your mouth for full effect. 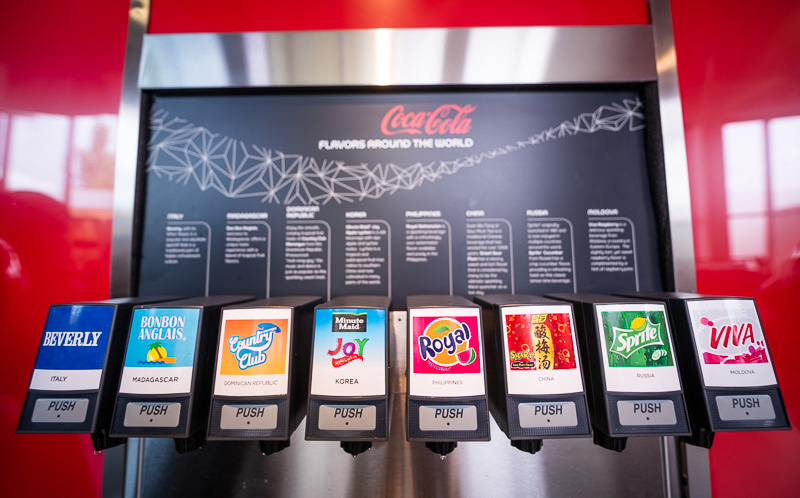 Everything else is new at Club Cool.

I don’t have any strong opinions about this. While I grew to love some of those other drinks–and associate them with Epcot–I’ve also long felt that the drink choices should rotate more regularly at Club Cool. 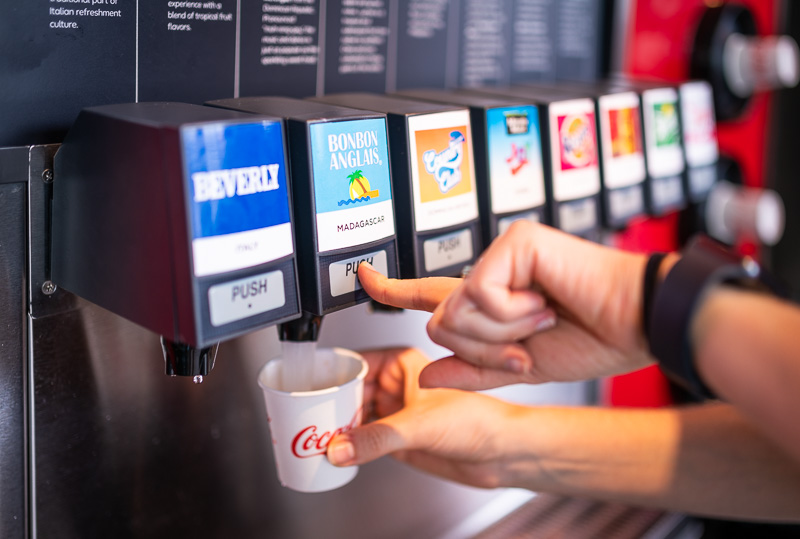 Out of all the drinks to keep, Beverly was the obvious choice. It’s just too funny and memorable, even if it does taste like [redacted].

We enjoyed several of the new flavors at Club Cool. Really good to have it back! 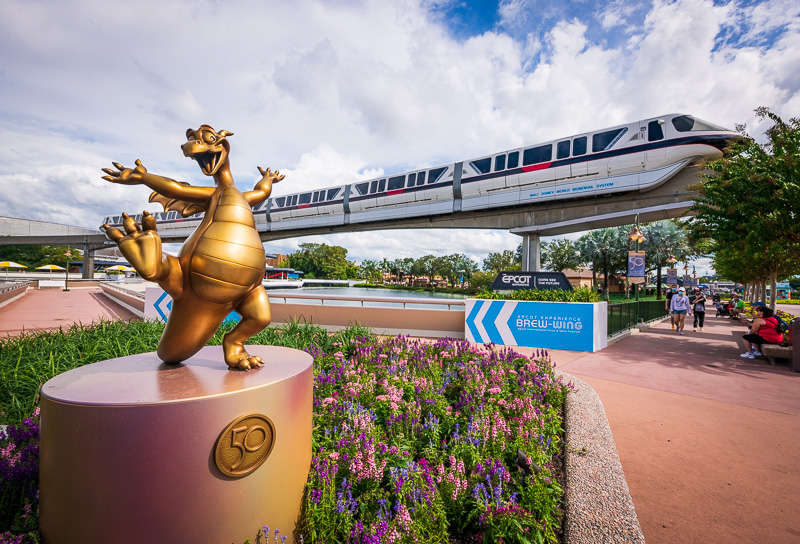 Another good addition to Epcot is the Figment Fab 50 statue, perfectly positioned for monorail photos.

I waited around 20 minutes for the above photo. Naturally, there has been a monorail passing right as I’m in this area on subsequent visits. 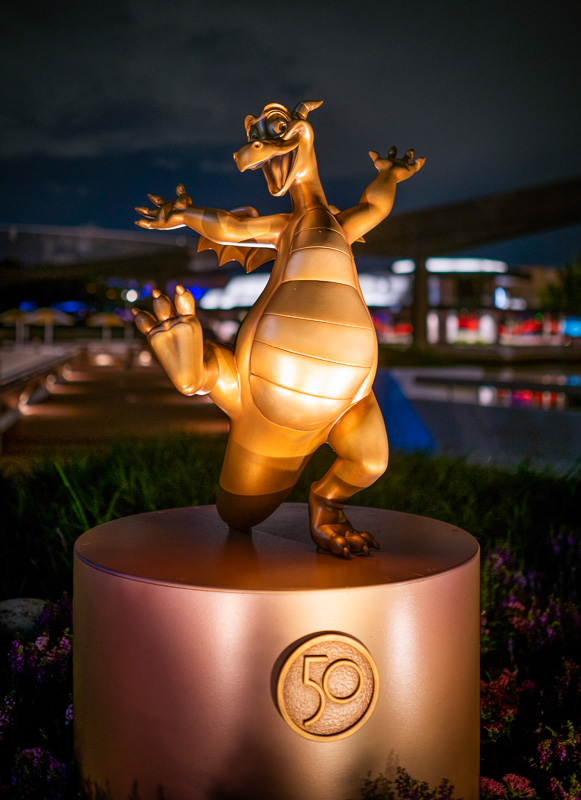 I was a bit surprised that Figment wasn’t added to the upper level of the Imagination pavilion by the leapfrog fountains, but perhaps that’s too far out of the way. This is a solid spot.

Here are photos of the other Fab 50 statues in Epcot: 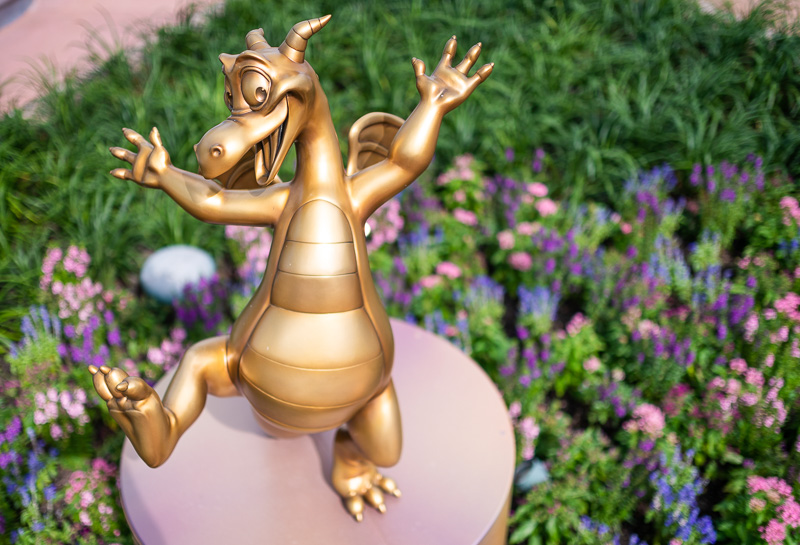 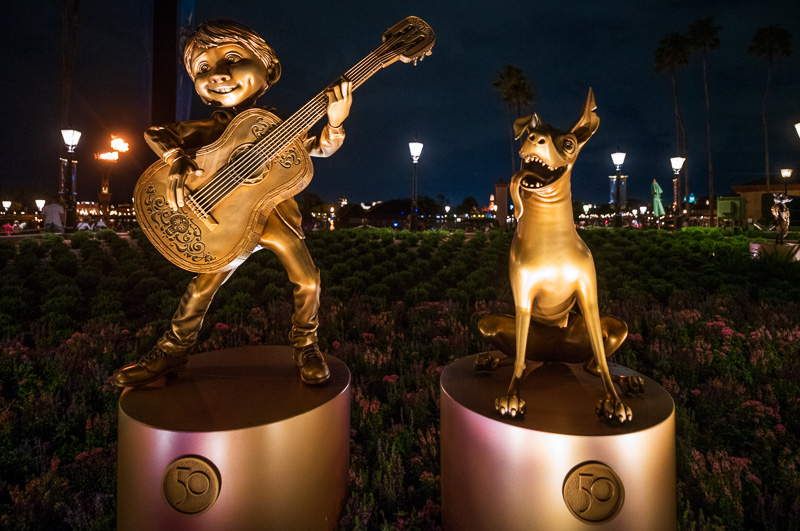 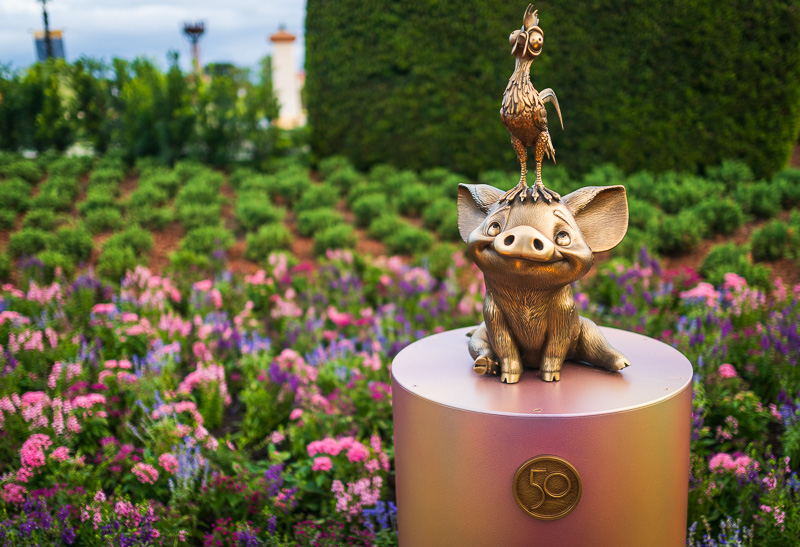 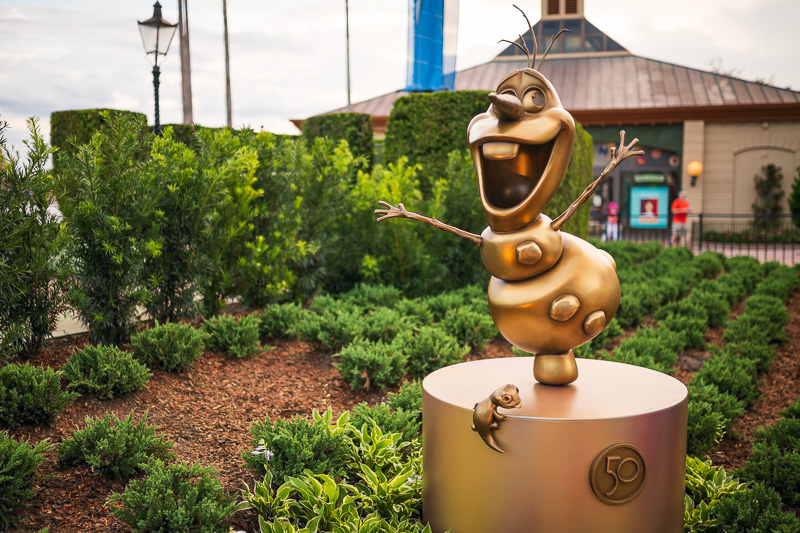 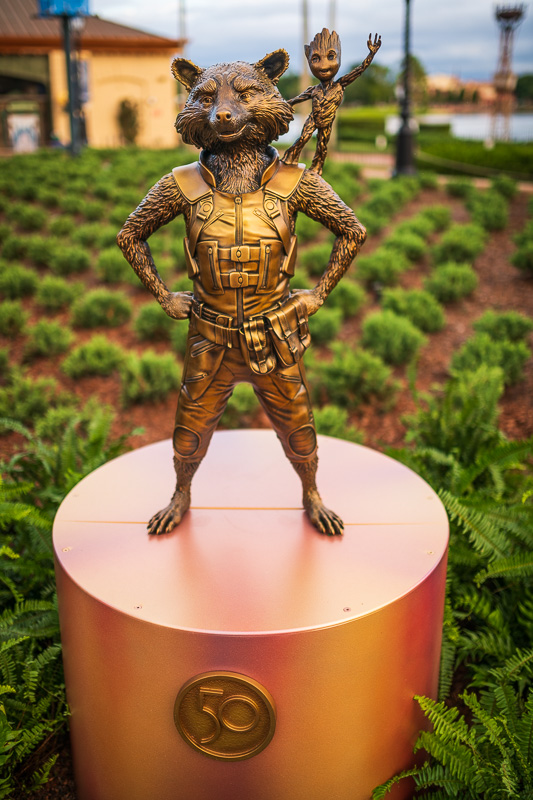 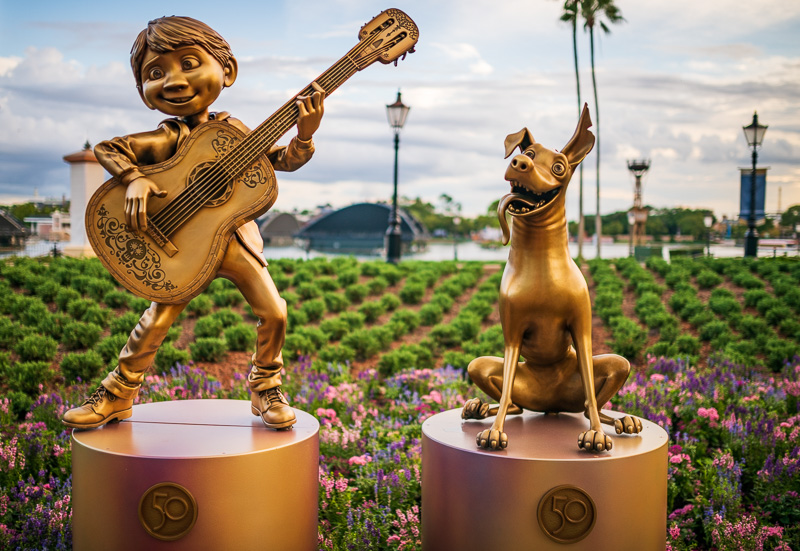 Some of these are very “interesting” choices for Epcot.

That’s all I have to say about that. 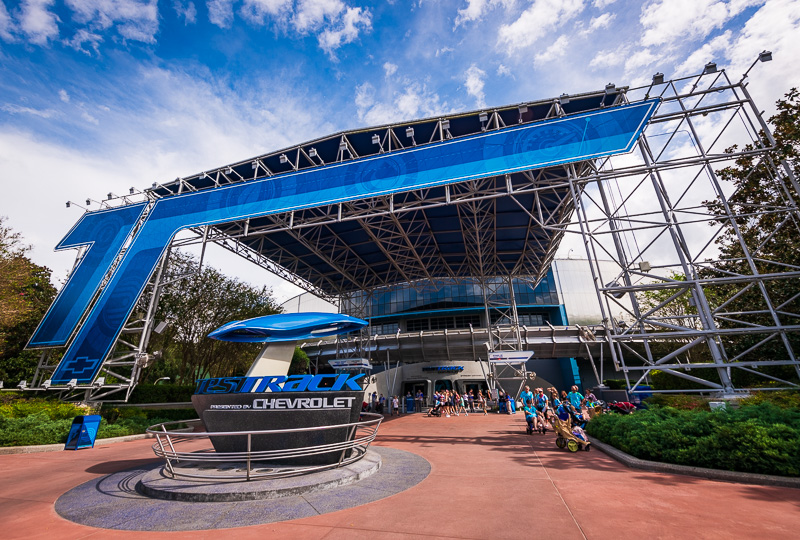 At the start of the weekend, we shared recent wait times analysis in Fall Crowds Fall Further at Walt Disney World.

There’s probably not much point in fixating on crowds given it’s covered there–and since attendance is now picking up in advance of the 50th Anniversary. 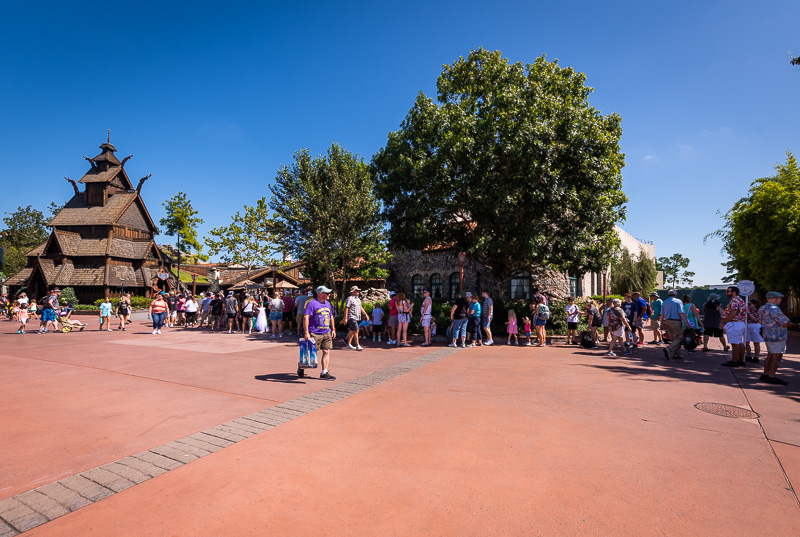 We will remind you about the Free Refreshments Lounge in Norway.

That also could change along with crowds from the World’s Most Magical Celebration, but it’s a great option for now–free food, air-conditioning, and a beautiful setting!

Speaking of the 50th Anniversary, in case you missed it, Harmonious will soft open on September 29, 2021.

On both that night and September 30, Harmonious will be shown at 9 pm. While it still says “Harmonious — Opening October 1, 2021” on the official entertainment title, this soft opening is official. You can find it on the entertainment schedule and calendar on DisneyWorld.com. 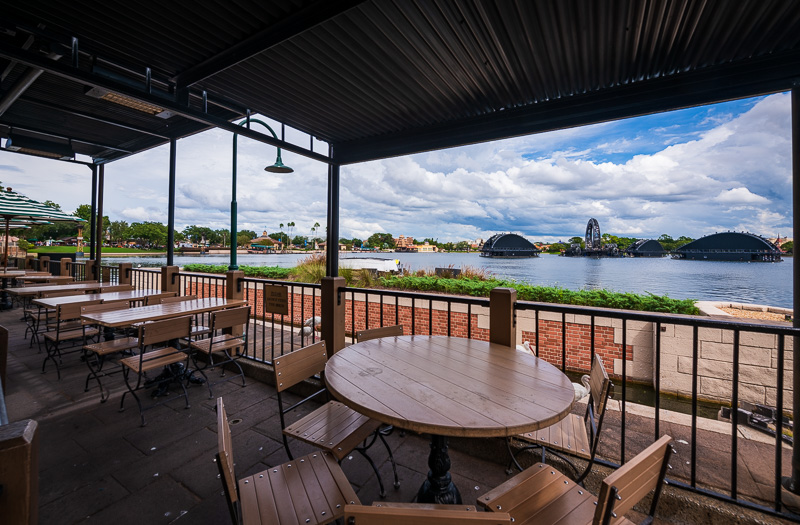 In New Harmonious Dining Packages at Epcot, we promised we’d check out the views from those restaurants and report back. During one of our visits to Epcot this week, we did exactly that.

Above is the outdoor seating area at Rose & Crown Dining Room. My concern here was the lack of a straight-on view of the Stargate, but this location is otherwise really good. Low angle and close to the tacos–I’d be inclined to book that dining package if I wanted a seat for the show and wasn’t fixated on the perfect view. This should still be very good. 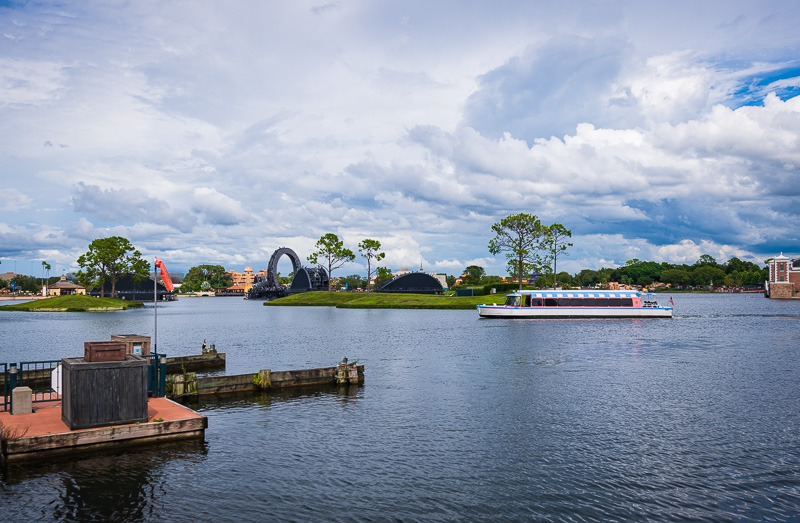 Above is the view from Spice Road Table.

I don’t like this at all. It should also be noted that this is the best view in the house there. Spice Road Table has a much deeper dining room; if you’re not at the water’s edge, you’ll be dealing with multiple obstructions. I would not book this dining package for the view, but that may not be your only consideration. 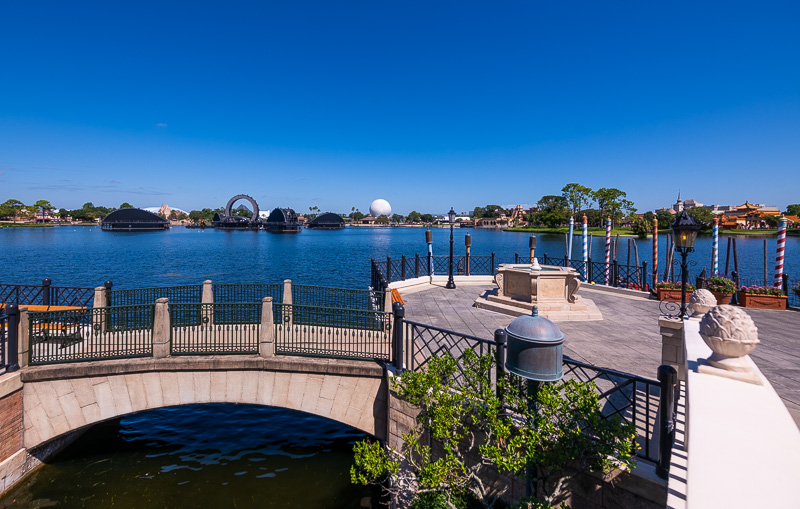 Contrast that view from Spice Road Table with this one in Italy.

We will update our Best Epcot Fireworks Viewing Spots after Harmonious debuts, but our preliminary recommendations are spots 1, 2, 4, and 5. 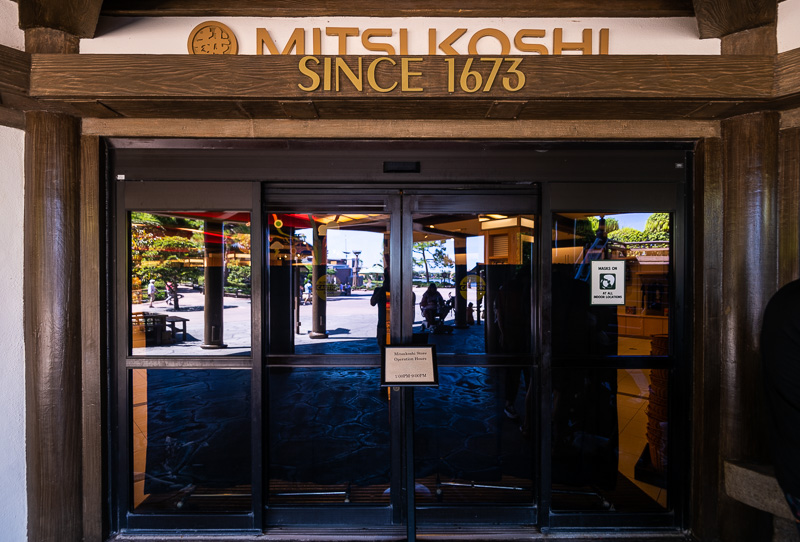 As noted elsewhere, Walt Disney World has mostly turned the corner on staffing shortages, but some persist.

Mitsukoshi Department Store’s 1 pm opening time is an example of this, as the Japan pavilion still struggles and continues holding job fairs. 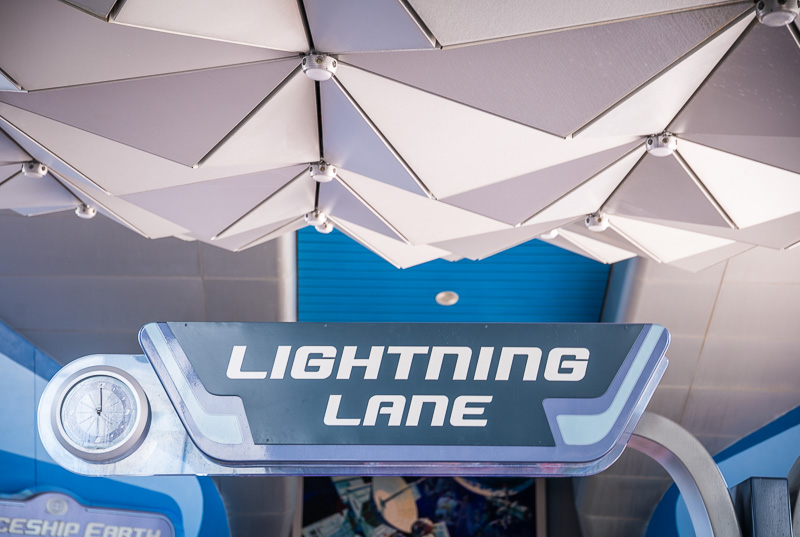 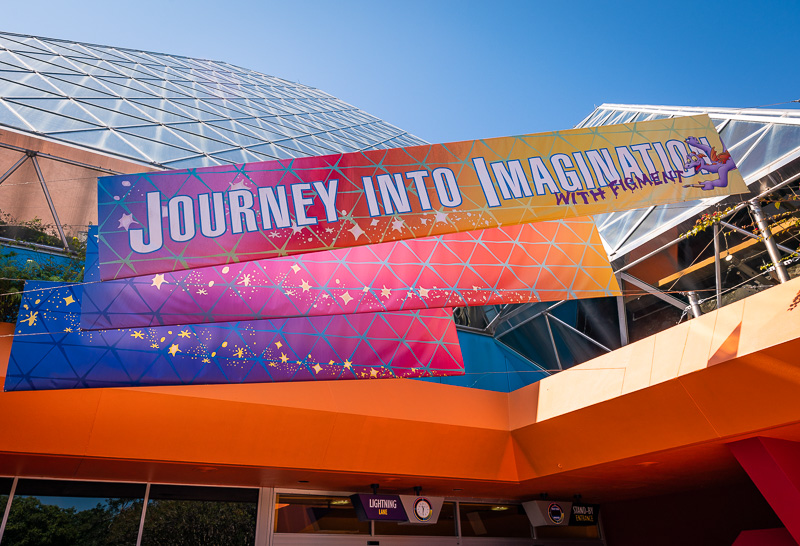 The company has not offered a single update on the Genie system since then. As previously noted, this project has been more rushed than normal, and Walt Disney World is still working on the specifics of the Lightning Lane and Genie+ system in a race against the clock.

There probably won’t be any updates on the Genie system in September. At this point, it’s too close to Walt Disney World’s 50th Anniversary for a topic that has garnered such an overwhelmingly negative reaction among fans. Although there’s a big media event next week, Genie is unlikely to be a significant topic during that. The company probably does not want stories about the milestone tainted by mentions of price increases, upcharges, and so forth. 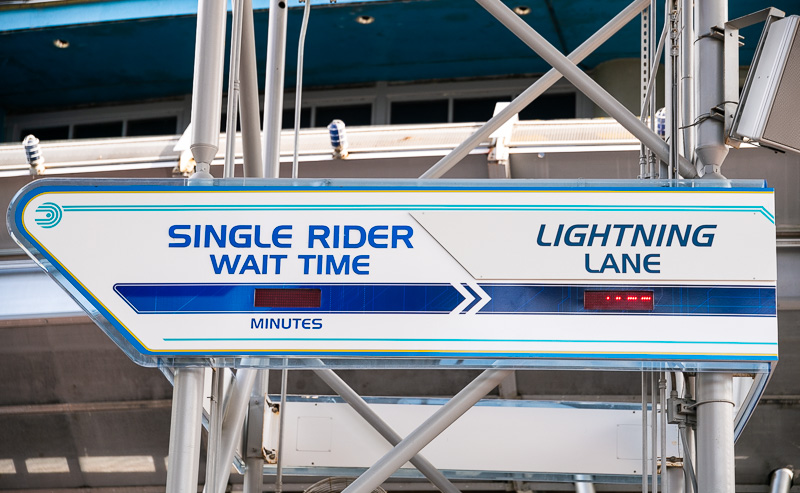 Rather, our expectation is that the next Genie+ and Lightning Lanes update comes the week after the 50th kickoff festivities. Given responses to the last news, a Friday “taking out the trash” afternoon news dump is the most likely scenario.

If at all possible, the Genie system will still launch before the end of October 2021. Walt Disney World wisely never provided a specific date previously, but the system’s debut has already been pushed beyond its second week of October launch. Our expectation is it’ll be ready by one of the last two weeks of the mont, but who knows; early November 2021 is also a possibility.

What do you think about what we’ve covered in this EPCOT update? If you’ve visited recently, what was your experience like at EPCOT? Have you had a chance to dine at Space 220, browse Creations Shop, or taste that sweet, sweet Beverly at Club Cool? Any thoughts on the Lightning Lanes and Genie+ at Walt Disney World? What about construction progress at Epcot? Any questions we can help you answer? Hearing your feedback–even when you disagree with us–is both interesting to us and helpful to other readers, so please share your thoughts below in the comments!