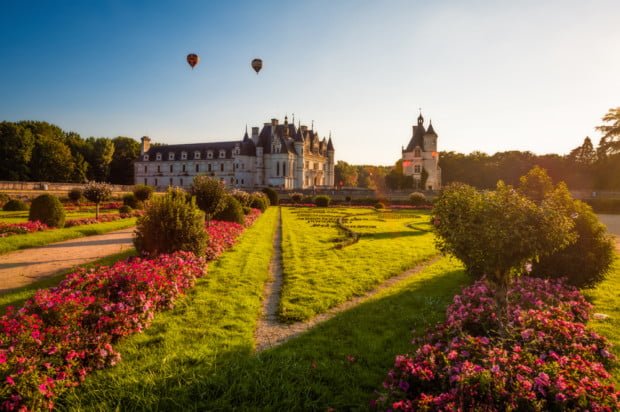 We pick up this installment of our Impressions de Bricker France Report after Part 4, our long day in Paris. We had called a last-minute audible and decided to do the Loire Valley rather than another day in Paris, a decision that was motivated 100% by Impressions de France. Does that seem crazy? (Note: for some reason, the photos in this post are not loading via mobile…)

When it comes to Disney fandom, one thing you can be certain of is that no matter how obsessive or crazy something may seem, you are not alone. Want to read about the programming of Country Bear Jamboree? Someone already wrote the book. Collect vintage drink holders from Tokyo Disneyland? You’re in good company. Dress as a person from EPCOT Center concept art for Halloween? You’ll be recognized. Outsiders may think this weird, but I find it to be awesome. Alas, we are not the first ones to attempt visiting every location from Impressions de France. I learned this during the trip, and in no way was it a letdown. After all, we weren’t doing it in order to loudly proclaim “FIRST!”

I mention this because our trip originally did not include Loire Valley. This was not going to be a day-trip until in the car as we drove from Normandy. The incredible sense of satisfaction we had from our first couple of days, plus the realization that we may not have a car next time we visit France, prompted us to research other nearby Impressions de France locations. That led me to this map, which showed a cluster of castles not too far from us in the Loire Valley. I have no idea who created it, but a huge thank you to them; their map led directly to our best day of the trip.

While our spontaneity proved beneficial, it was also detrimental. Going in, the only thing we had was a strategy for hitting the 5 castles (ChÃ¢teau de Chambord, ChÃ¢teau de Cheverny, ChÃ¢teau de Chenonceau, ChÃ¢teau de Montpoupon, and ChÃ¢teau de Chaumont) arranged by a combination of Google Maps efficiency and hours of operation. Beyond knowledge of the Impressions de France visuals, we had done zero research into what each had to offer.

If you ever plan on recreating this itinerary, hopefully you can learn from our mistakes (which I’ll cover as we go) and iterate on what we did…

The instant we arrived at ChÃ¢teau de Chambord, we knew we had made the right call heading to Loire Valley. Even though the front was under refurbishment, the building and its grounds were beautiful, just like in Impressions de France. (No CGI enhancements here!)

I would describe this chÃ¢teau as regal–it is the largest in Loire Valley and features a stunning mix of Renaissance and medieval architecture–but it was built as a hunting lodge. Look at that glorious building. A hunting lodge.

Notwithstanding its intent of being a place where bloody pheasant carcasses were dragged up a grand spiral staircase (I envision this as being every bit as farcical as depicted by The Rules of the Game), this chÃ¢teau is lavish.

One thing I really appreciated about Chambord was the mix of visual artifacts with engaging displays (in English) about the significance of said items, rooms, and just general history of France and its royalty.

My knowledge of French Revolutionary history doesn’t extend much beyond high school. In a small Midwestern town, the depth of coverage at my school was essentially, “oh yeah, France had a revolution, too. Napoleon was there.”

I was rapt by the various displays, and Chambord has definitely motivated me to learn more about European history.

Additionally, Chambord had a glorious hall of antlers (a motif of the day), and you can’t go wrong with that.

Mark took our photo out front (back?) to serve as proof that Sarah and I visited ChÃ¢teau de Chambord.

We ended up spending more time here because the experience offered so much variety. In addition to the interiors and various items on display, the self-guided tour climbed spiral staircases and ended up at the top terraces, with sweeping views of the Loire Valley.

All in all, it was an incredibly satisfying with a lot to explore, see, and read. I cannot recommend ChÃ¢teau de Chambord highly enough.

On the planning v. spontaneous front, this was a small victory for spontaneity. Had we done our due diligence, we would have discovered the refurbishment work on the front side, and I think we would have skipped ChÃ¢teau de Chambord. That refurbishment in no way impacted our visit, so skipping it would’ve been a mistake.

Anyway, I won’t fixate on Chambord further here, so if you want to read more, please refer to my ChÃ¢teau de Chambord Photos & Tips post on TravelCaffeine.com.

Our late start coupled with an approximately 3-hour visit to ChÃ¢teau de Chambord, meant we’d have to cut something from the day. We had absolutely no basis for making our cuts and didn’t have time to do any research, so we chose arbitrarily.

Well, not totally arbitrarily; the decision-making process went something like this…

Mark: “Which one is the place in Impressions de France with all the dogs?”
Me: “Cheverny.”
Sarah: “That sounds good to me!”
Me (sarcastically): “Do you think those dogs are still there…?”

The fact that my last comment there was sarcastic is demonstrative of just how little research we did. None of us had any idea that ChÃ¢teau de Cheverny is famous for the hunting dogs that live on site. I had just assumed that part of Impressions de France was staged for added visual interest.

Granted, the film was shot 30+ years ago, so those dogs are probably…uh…living on a farm now, but still…

On the other hand, there’s something to be said for a nice surprise. We were all really excited when we got to Cheverny and heard dogs barking. As soon as I heard them, I was elated. My mind began racing with photo possibilities and the potential for re-creating another Impressions de France scene.

My enthusiasm was deflated when I asked a staff person when the dogs come out, and she responded, “first thing in the morning.” We had missed ‘the running of the hounds,’ or whatever they call it. (Online sources are less specific, indicating the dogs go out a couple of times per week–I’d want to nail times down before returning, as that’s a ‘bucket list photo’ now for me.)

I felt a renewed sense of enthusiasm almost as soon as we entered the chÃ¢teau and we were greeted by dinosaur antlers. Like Chambord, Cheverny featured antlers in all of some of its decorating. (Your move, Gaston.)

Technically, these are cervus megaceros antlers, which is not a dinosaur, but the prehistoric ancestor of the elk. Whatever. Counts as a dinosaur in my book.

Interestingly, unlike many of the other castles in the area, this one is not owned by the French government. It remains privately owned and occupied, and the owners allow tours.

Perhaps as a result, less of the castle is open to the public. While this might seem disappointing, the upside is that the ‘stuff density’ of each of the rooms you can explore is high.

Each room packs a powerful punch (moreso than either Chambord or Cheverny), and is filled with numerous tapestries and works of art.

Likewise, the grounds are exquisitely manicured and are quite the joy to explore.

For some reason, there was a LEGO exhibit at Cheverny when we visited (see the dogs above). Now, I love LEGO just as much as the next 8-year old trapped in a 31-year old body, but the execution here was tacky. LEGO creations were actually placed within the room displays, which are otherwise period-specific time capsules, either displacing authentic parts of the room or “supplementing” them.

A lot of Disney fans (myself included) lament how the parks have been ‘dumbed down’ over the years, and this is a perfect example of how that is a societal thing, and not confined to Disney. To me, this is far more egregious, as ChÃ¢teau de Cheverny presents itself as a historic landmark. (Both of the ‘paintings’ above are made of LEGO.)

In fairness, the impetus for my visits to historic landmarks is rad toys, but usually I find them in the gift shops, not crammed into historic displays. Frankly, I was pretty shocked to see this in France, of all places, which has spent millennia refining the whole ‘condescending intellectualism’ game. If this sticks out to some unrefined Disney blogger as tacky, I can only imagine how France’s intellectuoso must feel.

Of the three chÃ¢teaux we visited that day, I would rank Cheverny last. This should not be read as an indictment of Cheverny, as it was really cool. Were it the only chÃ¢teau we visited, I would’ve been impressed. I mean, it had pretty rooms, dinosaur antlers, nice grounds, and an embarrassment of canine riches. It just had incredibly staunch competition from Chenonceau and Chambord. You can judge for yourself with the photos here, and also with additional ones I will share in a post on TravelCaffeine later this week.

The great thing about ChÃ¢teau de Cheverny was that it was distinct from the other two spots we visited that day. Its highlight was the lavish interiors, which were superior to those at Chenonceau and Chambord. Its grounds were also quite lovely, albeit not on par with Chenonceau. Still, it felt like it was lacking a wow-factor, which is what causes us to rank it 3 of 3. Perhaps if I saw the ‘running of the hounds’, I would have felt differently. If you’re visiting the Loire Valley, I wouldn’t necessarily recommend it (nor would I recommend avoiding it). I don’t know how awesome the chÃ¢teau we missed are, nor do I know how much time you’ll have in the Loire Valley–two important variables.

On Page 2 of this post, we’ll cover the highlight of our visit to the Loire Valley: ChÃ¢teau de Chenonceau!