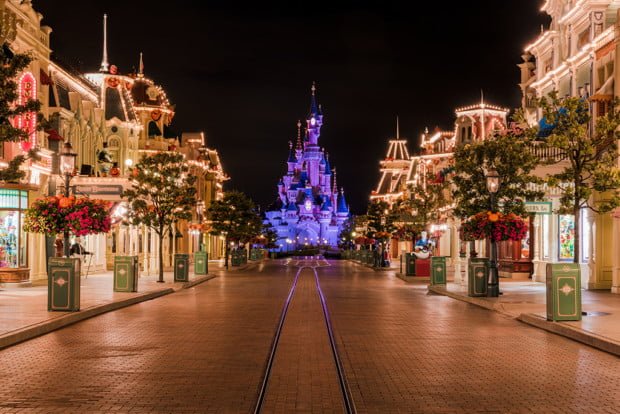 Alright, Part 6: the beginning of our stay at Disneyland Paris or, for those of you who aren’t interested in our Epcot-inspired jaunt through Europe, the only part of this trip report you’ll be reading. 😉

We had arrived at our hotel late the previous night, after a long day exploring the Loire Valley (see Part 5 of the trip report). I don’t recall the exact time, but I want to say it was after midnight before we were finally settled into our room at Hipark Serris in Val d’Europe.

The room itself was nice and spacious, essentially being a 1-bedroom villa (I believe it’s considered an “extended stay” apartment-kinda thing). Originally, we were booked at HÃ´tel l’Elysée Val d’Europe, but ended up switching when Hipark lowered its nightly rate. We’ve stayed at a couple places in Val d’Europe, and I suspect all of the hotels in this area are fairly nice.

The whole town is relatively new, having been masterplanned in conjunction with Disney. It has a Celebration/suburbia vibe to it, but with traditional French stylization. While it doesn’t have the same historical allure of the quaint villages in France, it has its own modern charm and is not too cookie cutter. All of this is to say that the hotels of Val d’Europe are probably solid options if you don’t want to pay the insane prices of Disneyland Paris hotels.

It was an easy walk from our hotel to Disney Village, and I think the total time from door to turnstiles was maybe 20 minutes. The walk was not any worse than what you’d encounter going from Hotel Cheyenne or Hotel Santa Fe.

Annual Passes are reasonably priced at Disneyland Paris, and given that we intend upon going back for the start of the 25th Anniversary, it made sense to purchase these rather than standard tickets. The original plan was for me to purchase first, and then sponsor Sarah and Mark so they could each save 10% and I would get ‘credit’ towards 12 free months. Unfortunately, it seemed purchasing and sponsoring on the same day was not possible. (Does anyone know, definitively, whether this is true?)

In any case, buying the Annual Pass vouchers (to be redeemed/converted inside the park) was quick and painless, and we were in the park in a matter of minutes. Having been a while since our last visits, we were–naturally–lusting to get back into that wonderful park.

After pushing through the turnstiles, we stopped in our tracks and gazed up at that glorious sight, the most grandiose icon in any Disney park in the world: Studio 1. We entered its gilded doors and passed through those hallowed, err…hollowed…walls, we realized this is where dreams come true. 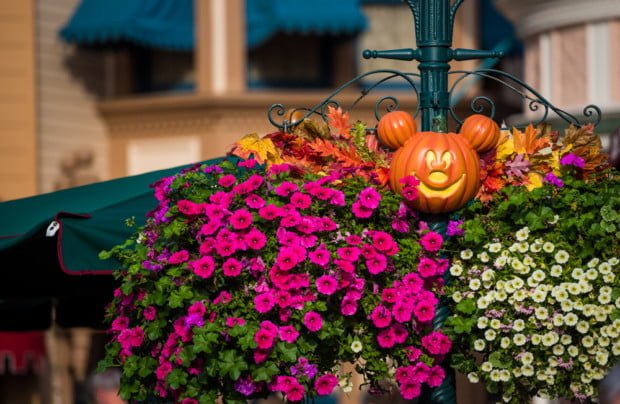 Just kidding. Obviously we went to Parc Disneyland first. Main Street was already partially decked out for Halloween, and was looking great. 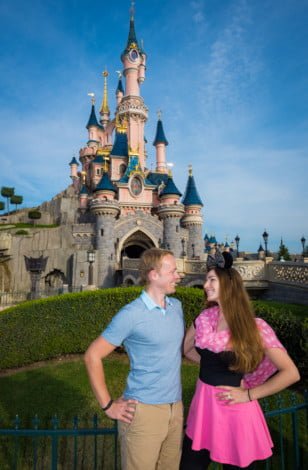 After that, we did a slew of attractions, including Pirates of the Caribbean, Phantom Manor, Peter Pan’s Flight, and ‘it’s a small world.’ The last two of these four were looking great, with Pirates being the lone outlier that was clearly long overdo for a refurbishment (it’s getting an extended one soon). 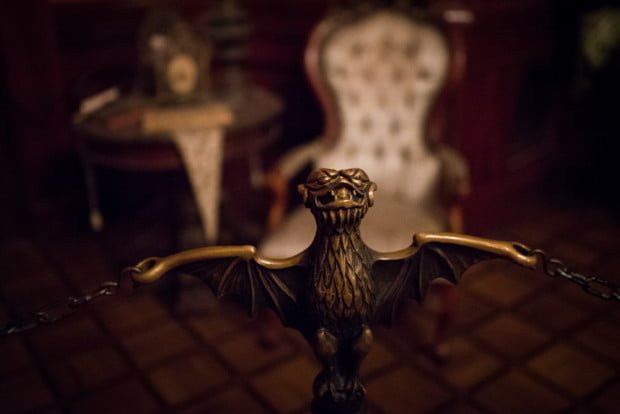 Throughout our trip, there was a pretty sharp contrast between the attractions that had received some EEP love, and those that had not. We delve into this in Part 7, so I don’t want to fixate on it too much here, but it was great to see some of the fruits of the EEP. It makes me even more excited for the future of Disneyland Paris. 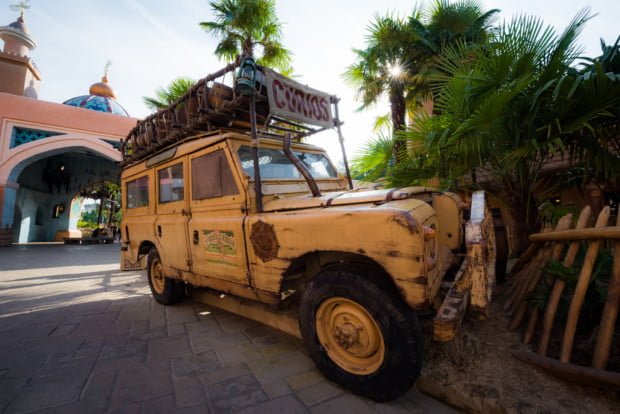 After doing a few attractions, we were pretty hungry. Dining at Disneyland Paris is beyond frustrating. Not all restaurants are open everyday, and the ones that are open tend to keep odd hours. To make matters worse, the signs throughout the park indicating what’s open are pretty much always incorrect. It’s like a game of Cups in which Disneyland Paris is Joey, and you’re Chandler. 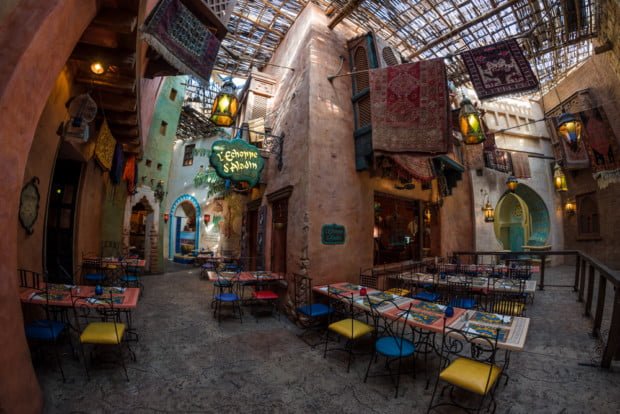 Fortunately, I found this site that contains Disneyland Paris Restaurant Hours before our trip, and it proved to be pretty accurate. Armed with this knowledge, we decided to “rope drop” Agrabah Cafe, which would be open for approximately 2 hours and 37 minutes that day. 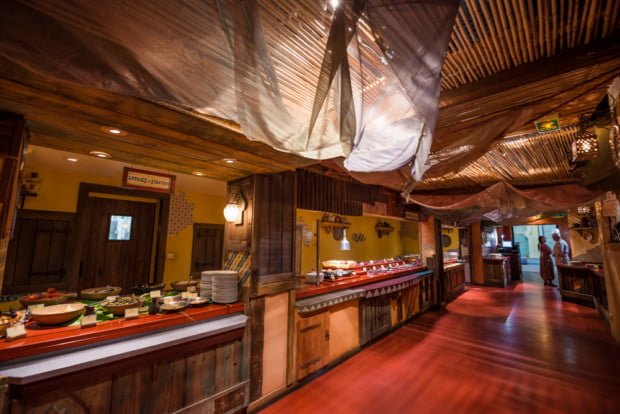 Naturally, it did not open on time. Once it did, we were the first guests seated. I intend upon writing a full review in the near future (…he says with ~10 Shanghai, ~15 Tokyo, ~5 Hong Kong, ~10 Disneyland, and ~10 Walt Disney World restaurant reviews waiting to be written…). Suffice to say, this was the best meal I’ve ever had in Disneyland Paris. 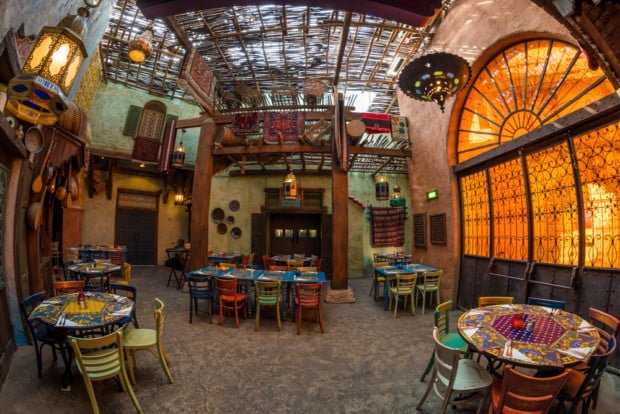 It’s actually one of the better Disney buffet meals I’ve had period, being just a rung below Tusker House and Boma. The seating areas for the restaurant were stunning (I had no idea this restaurant was so huge), and it would easily earn a spot on my Best Themed Restaurants at Disneyland Paris list, meaning that also now has to be updated… 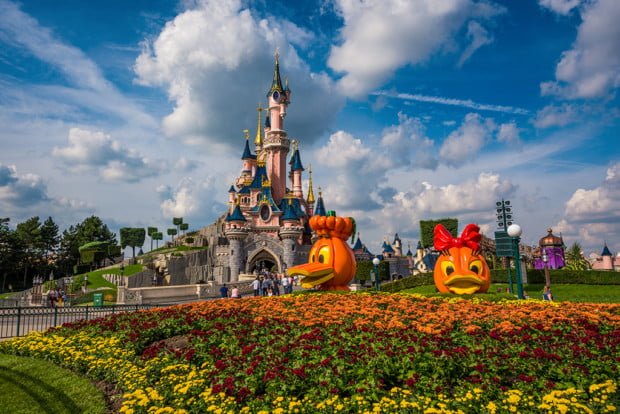 Following lunch, we spent some time in the Hub taking photos as a gorgeous clouds had seemingly gotten lost on their way to Florida and settled over France. Some of these photos are interspersed in the text below…

Before the photo session, Mark and I did Space Mountain: Mission 2. Sarah can barely do Expedition Everest, and this version of Space Mountain is far beyond that. 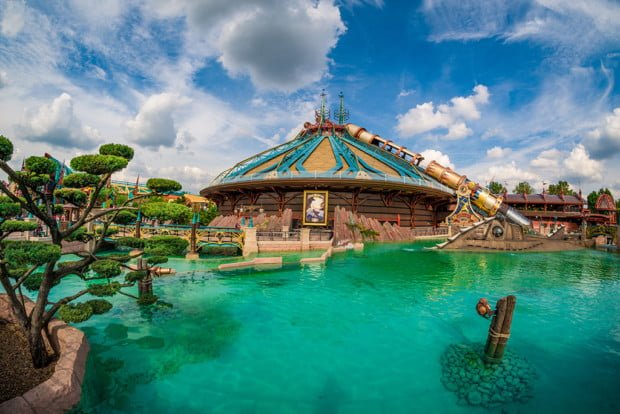 In fact, I can barely handle Space Mountain: Mission 2. It’s not so much that the attraction is too intense, it’s that the track is really rough. I imagine one of those “this is your brain on drugs” commercials from the 1990s, except with a roller coaster bashing my head around.

I got off the attraction feeling uneasy, and with the suspicion that I had lost a few IQ points, but everyone around seemed to be pretty happy and excited. Either I’ve become even more of an old fogey, or they are airheads. Probably the former.

Speaking of Space Mountain: Mission 2, I suppose now is as good of a spot as any to weigh in on the controversy concerning the conversion of this Space Mountain to Hyperspace Mountain. I’ve come out strong against a number of recent overlays, but I can’t muster up any outrage over this one. Whatever damage could’ve been done here already was when Mission 2 came to be.

By no means is Hyperspace Mountain a good fit for Discoveryland, but it strikes me as more a lateral move than anything else. So long as the beautiful exterior is not impacted by the overlay, I don’t really care. I think a lot of the angst stems from Disneyland Paris fans anticipating the attraction being restored to the original Space Mountain: De la Terre Á la Lune, which I never got the chance to experience (I have heard the attraction score, which is beautiful). 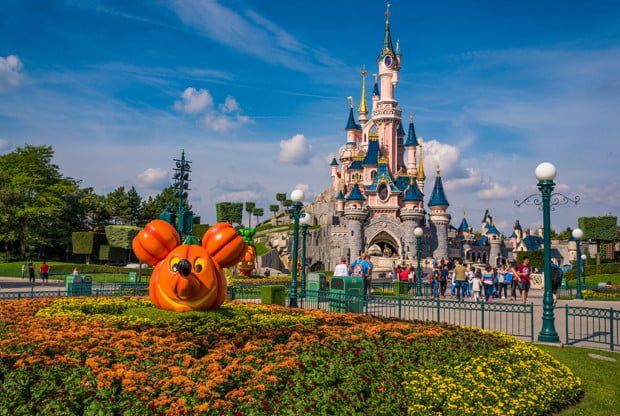 In light of other restoration work occurring throughout Disneyland Paris, this seems like a reasonable expectation. That’s certainly what I wish were occurring, and it is odd that the obvious choice for a restoration is not receiving one. Converting Space Mountain to Hyperspace Mountain in the context of other nods to the past is a bit incongruous.

On the other hand, Hyperspace Mountain is an unequivocal hit with guests in Anaheim (it has the highest guest satisfaction rate in the entire resort) and striking a balance between nostalgia for fans and what’s popular for regular guests seems like a wise move, and is more or less what Disneyland did for its Diamond Celebration.

If Discoveryland hadn’t already gone from a brilliant reinvention of Tomorrowland to one inhabited by Toy Story and Star Wars, it’d be a different story. If this were a conversation about going from Space Mountain: De la Terre Á la Lune to Hyperspace Mountain, my response would be entirely different. But neither of these things are the case.

Mission 2 is nothing special, and I really don’t care how much they trifle with that unimpressive concept. It’s sort of like if Disney randomly inserted the Inside Out characters to the current Journey into Imagination. Okay…that’s not what I’d like to see happen with the attraction, but it’s not like that could somehow make it any worse than it already is.

From there, it was on to Walt Disney Studios Park (for real this time), which is where we’ll pick up on Page 2.

There are also some nice night photos of Disneyland Paris, so please don’t check out just yet…