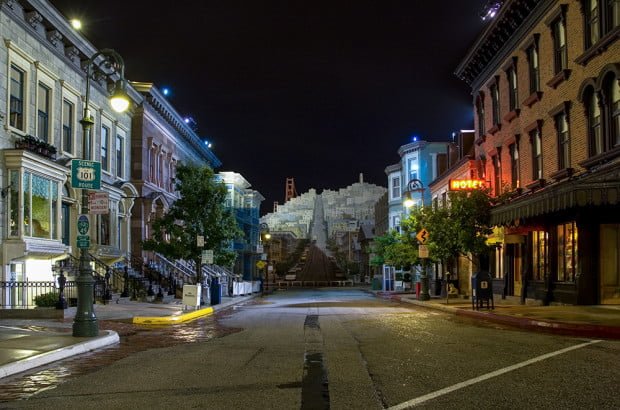 Baseline Tap House will replace the former Writer’s Stop, which is nestled between Sci-Fi Dine-In Theater and the former Streets of America, directly across from the entrance to Muppets Courtyard. It pays homage to the building’s former life as the Figueroa Printing Company, a mom-and-pop print house that had ties to the Walt Disney Studios in Burbank. Baseline Tap House will have indoor and outdoor terrace seating. The location will serve craft beers and California wines.The rest of the new Grand Avenue land (district?) will continue to the small corner of the Streets of America that has been preserved during the ongoing Star Wars: Galaxy’s Edge construction.

Beyond that, it was also announced that there will be facades for “merchants” appearing in this area for a music shop, loft apartments, a tailor, and more. Each window on the street will feature charming displays to give it a sense of place, which sounds somewhat like the former Streets of America.

This all opens in Fall 2017, and it’s unclear what (if anything) else Grand Avenue will include. There’s the potential for additional placemaking in what is now Muppet Courtyard to make it look like Los Angeles (or at least remove references to New York), but we wouldn’t hold our breath… 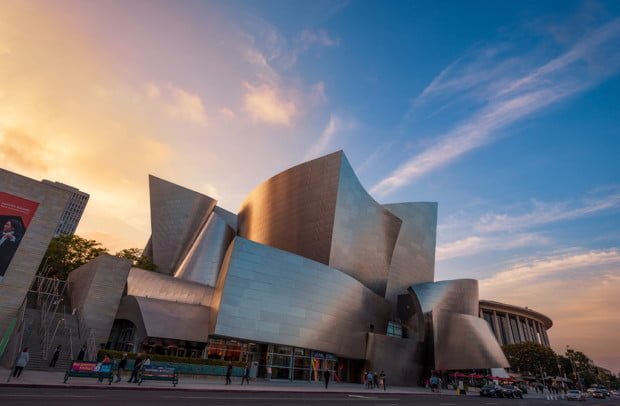 For those unfamiliar with it, Grand Avenue is a street in Los Angeles in the heart of DTLA that has been in the midst of a huge revitalization. (So far, so good. Imagineering’s story checks out.) Ironically, this revitalization was kickstarted by Disney–the family–with the donation of the gorgeous Walt Disney Concert Hall. Unfortunately, Frank Gehry’s architectural masterpiece is not in the cards for this area of the park.

Other additions to Grand Avenue have included the Broad contemporary art museum and luxury condo developments. I love DTLA and this revitalized area of Grand Avenue (quick plug for my 1-Day Downtown Los Angeles Walking Itinerary on our non-Disney travel blog).

However, none of the major aspects of the Grand Avenue Project are repurposed vintage office buildings or warehouses. Grand Ave is a long street, so maybe that’s happening somewhere, though.

In reality, this type of revitalization is happening all over Downtown Los Angeles. Repurposing older buildings is very much en vogue (particularly in the Arts District near Little Tokyo), and is making the city-center much more inviting.

Grand Avenue is probably just a good name proxy, especially since it’s tricky to use other names (Wilshire, for example) because there are other places in the park based on those areas. To my knowledge, nothing else in the park is pulled from Grand Ave. 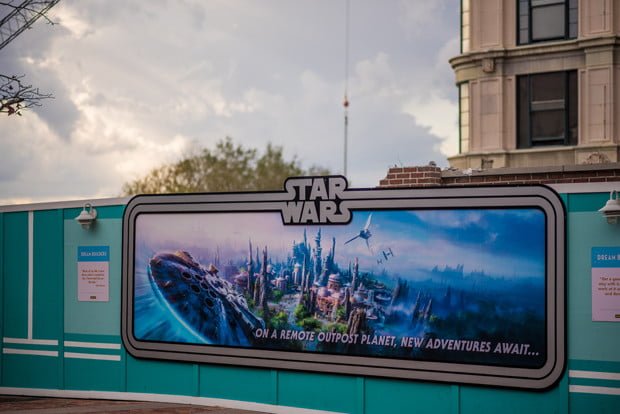 It’s interesting to me that Disney’s Hollywood Studios is getting another street/district based upon California. I think the general assumption was that this park was moving towards areas based on specific studios (Muppets, Lucasfilm, Pixar), with the park’s ‘opening act’ remaining dedicated to old Hollywood.

Grand Avenue doesn’t really fit with that scheme. Modern-day Los Angeles is very different from what the rest of the park–old version or new version–presents, making this a bit of a curious decision. It’ll be interesting to see whether this ends up feeling more idealized, or is true to modern day L.A.

My guess is that Grand Avenue is being added because it’s the path of least resistance. I suspect it will be a throw-away area, serving as filler between existing park boundaries and the future Star Wars: Galaxy’s Edge. (Will it even be a ‘land’ on park maps?) I wouldn’t be surprised if it’s viewed as disposable by Imagineering–a potential expansion pad that’s not even designed to be around in a decade from now.

Disney wants to clean up this area of the park and inject some new life into it, but without spending too much money, because it’s nothing more than a stopgap. This is exactly how I felt after walking into PizzeRizzo. With Muppet Courtyard and Grand Avenue being rolled into one, this now makes sense.

Personally, I would’ve far preferred the old Writer’s Stop being rolled into Muppet Courtyard, and expanding that, more colorful theme. The Muppets have a lot of unrealized potential, and so far, Grand Avenue looks fairly bland and nondescript.

To a large degree, I get this. With Toy Story Land, Star Wars: Galaxy’s Edge, and Minnie & Mickey’s Runaway Railway, Disney is easily spending over $1 billion on this park, and that number is probably closer to $2 billion than it is $1 billion. Fixing the entire park in one fell swoop would be cost-prohibitive, and it might also not be pragmatic.

For an area like this (and Muppets Courtyard) it also might make sense to wait 4-5 years to see how crowd flow is working and what guest satisfaction surveys are looking like, and then make additional changes based on needs and feedback.

Viewed through that lens, I have no qualms with the Grand Avenue addition. It seems quick and easy to replace, while also offering a modest upgrade (from a functional perspective) over what was there before. In a perfect world, I’d love to see this area have a full-scale reimagining with a healthy budget, but given how much money Disney is already injecting into the park, that seems unreasonable.

From my perspective, it’s better than just razing the Writer’s Stop and this stretch of the Streets of America, turning it into an expansion pad lined with some trees, and then addressing it in a second phase ~5 years from now. I think that is the realistic alternative here, and this is better than that.

My one qualm with this project is that it’s yet another repurposed ‘house’ restaurant being added to Walt Disney World. There are already a disproportionate number of restaurants at Disney Springs that feel as if they are hipster spots taking over refurbished farmhouses or warehouses, and that trend is getting incredibly played out. I know this is also a really common real-world trend, but I go to Walt Disney World to experience things I cannot in the real world.

Grand Avenue is already a bit out of place within the context of Disney’s Hollywood Studios thematically, so why not double down on that? Just make it cool for the sake of being cool, and drop the convoluted backstory that involves repurposing. I don’t know…make it an actual print shop instead of a former one. Make it something totally different. In the grand scheme of things, it’s not a huge deal one way or the other…so long as this is not the long-term plan for this plot of land.

What do you think about Disney’s Hollywood Studios getting a Grand Avenue district? Have you visited this part of Downtown Los Angeles? Do you agree or disagree with our take on the addition? Any questions? Hearing your feedback about your experiences is both interesting to us and helpful to other readers, so please share your thoughts or questions below in the comments!