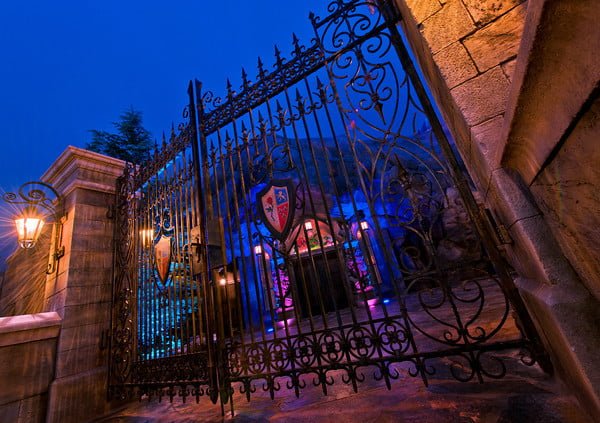 Starting Summer 2018, Be Our Guest Restaurant in Magic Kingdom will offer a prix fixe three-course dinner menu with premium French-inspired dishes and new offerings. With this, comes the likelihood that Walt Disney World will have another Signature Restaurant, requiring 2-credits on the Disney Dining Plan.

This new menu will be served starting July 27, 2018, with reservations opening February 23, 2018. Disney Parks Blog shared details about the menu today, along with food photos, which you can see here. Obviously, professionally-staged images can make even the most unpalatable cuisine look delectable (as we saw recently with the taco trio at Pecos Bill, which look nothing like this in real life).

However, in the case of Be Our Guest Restaurant, the descriptions of this new prix fixe menu suggest that these will be premium offerings. Items like Charred Octopus, Grilled Center-Cut Filet Mignon, Saffron-Infused Seafood Bouillabaisse, and Roasted Lamb Chops suggest a certain higher-tier quality. This, coupled with the fact that Be Our Guest Restaurant dinner reservations have been blocked off for about the last month suggests that more than just a menu change is in store…

If the change to 2-credit Signature Dining does occur (and we’re 99% certain that it will), it should come as no surprise. Be Our Guest Restaurant has now been open for over 5 years, and its popularity has not subsided in the least. It’s still the most coveted Advance Dining Reservation in all of Walt Disney World, with availability sometimes gone by the 180 mark.

To be frank, we are surprised this didn’t happen sooner. Even before the restaurant opened, many fans speculated that it’d be Signature Dining. Way back in the day when the menu was released, it featured beer & wine, causing the internet to grab its collective pitchforks in ire over the “fact” that the park Walt Disney built by hand (it’s not) would become a booze-fueled rave party that would make Big Al blush (it didn’t).

UPDATE: Disney has confirmed that this new prix fixe menu is replacing the current dinner menu, and Be Our Guest will be a Signature Restaurant requiring 2 table service credits on the Disney Dining Plan. Out of pocket pricing is not yet available, although $55/adult and $35/child costs are floating around (we have zero clue as to the source or veracity of those numbers–the adult price seems too low to be accurate to us). 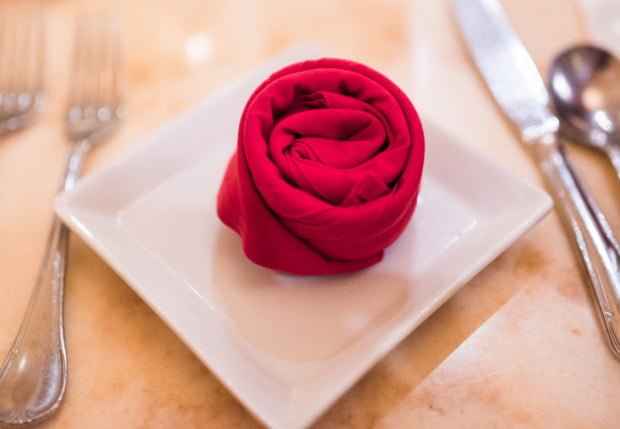 Erroneous alcohol predictions notwithstanding, between the alcohol and the classier French menu, there were signs pointing to Be Our Guest Restaurant being a Signature Restaurant. However, that more reasonable prediction also turned out to be incorrect. Instead, the restaurant opened as a 1-credit location, and instantly became one of the best values for using Disney Dining Plan credits.

As its popularity has proven enduring, it seemed only a matter of time before Be Our Guest Restaurant would go Signature. Its trajectory is similar to that of Le Cellier: immense popularity leading to a Signature status justified by a new menu. (Don’t forget that Le Cellier’s story involves going Signature for dinner first, then followed by lunch. We could also see that play out at Be Our Guest, but only if the gain in pricier meals would offset the turnover rate of faster lunches.)

More recently, this seemed like an inevitability around mid-January when readers started to report that no ADRs were available even beyond the 180-mark, and they were told by Cast Members on the phone lines that no reservations would be taken for July through September.

This led to rampant, semi-informed speculation: extensive work in the kitchen would necessitate a closure; a new menu was on the way; something more akin to Cinderella’s Royal Table; conversion to Signature Dining that would require advance notice for those on the Disney Dining Plan.

It would seem that all of this has turned out to be more or less true. While Be Our Guest Restaurant is not going totally in the direction of Cinderella’s Royal Table, it sure sounds like the new prix fixe menu will be quite similar in the quality of what it offers. (Along these lines, it’ll be interesting to see whether Be Our Guest Restaurant starts requiring pre-payment in full a la Cinderella’s Royal Table.) 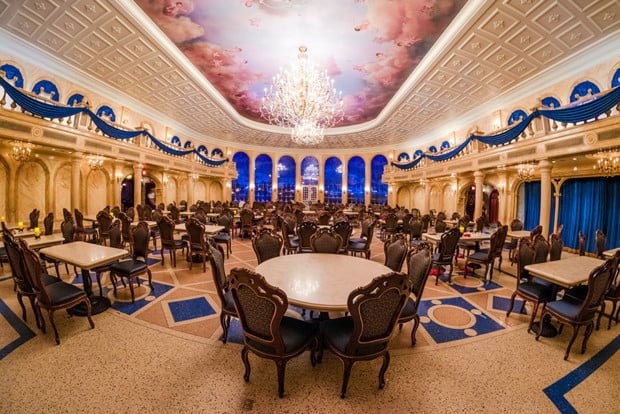 From our perspective, this is all a bit of a mixed bag. This should make a restaurant that is nearly impossible to book slightly easier to score. We’re not bothered by the doubling of the “credit price” as we rarely use the Disney Dining Plan. The new menu looks good to us, and could be justifiable in terms of the price increase when paying out of pocket. Moreover, we think Magic Kingdom is overdue for a true Signature Dining option…we’re just not sure this is the right venue.

Our biggest issue is that the quality of the Be Our Guest Restaurant experience is not commensurate with Signature Dining. Irrespective of how much of an improvement the menu is, the setting is decidedly not Signature; at least in the traditional sense of the term.

This same complaint could be leveled against Cinderella’s Royal Table, but it’s even more pronounced at Be Our Guest Restaurant. The main dining room is styled after a ballroom, but it feels and sounds as much like a school cafeteria. (Unpopular opinion: I’d love to see Be Our Guest Restaurant close for a few months, eliminate the ‘flex’ nature of the venue, rework the ballroom seating to make it feel more intimate, improve sound dampening, and convert to table service all day.)

Then comes the question of the menu. It’s incredibly doubtful that the new menu will be twice as good as the old one, but then again, it’d be tough to claim that any of the 2-credit Signature Restaurants are twice as good as the best 1-credit options. Certainly Le Cellier did not double in quality–it’s new menu was mostly a pretense to offer cover for the status elevation, which was actually driven by popularity. As with Le Cellier, this change to Be Our Guest Restaurant is almost certainly demand-driven. 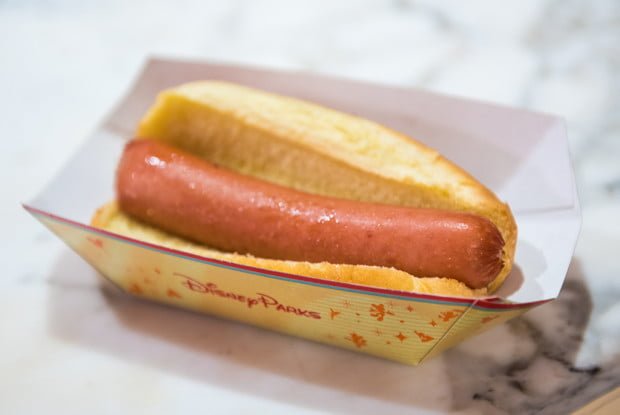 With this three-course prix fixe menu, it does seem that Walt Disney World’s culinary teams are at least making more of an effort here to justify the status and price upgrade. That’s nice to see, because the reality is that Disney could offer a menu of nothing but day-old reheated hot dogs from Casey’s Corner, and Be Our Guest Restaurant would still fill up nightly. The atmosphere, Beauty and the Beast inspiration, and the exclusivity would continue to make it highly-coveted.

Another thing that concerns us with regard to the new menu is quality control. Be Our Guest Restaurant is a huge restaurant, with the kitchen having to serve far more guests than the average Signature Restaurant in one of the Walt Disney World hotels. Be Our Guest already has some issues with consistency, and making the menu more sophisticated and labor-intensive is only likely to exacerbate that.

Ultimately, the jury is still out on these changes to Be Our Guest Restaurant for us. Of course, there’s also the possibility that this prix fixe menu will simply be offered in addition to the regular menu, but then again, it’s also possible that Epcot will bring back Horizons! We don’t think this idea is inherently good or bad, and are curious to see what other ways Walt Disney World attempts to enhance the experience. (Beyond atmosphere, a top-notch dessert menu would be a start.) As with most things Disney-related, the final verdict will depend upon implementation. We’ll definitely give it a try–assuming we’re ever able to score an ADR–and will report back!

What do you think of the potential changes to Be Our Guest Restaurant? Is this new prix fixe menu something you can get behind, or will the credit-cost increase remove Be Our Guest Restaurant from your list of must-do dining? Any speculation or thoughts of your own to add? Any questions? Hearing your feedback about your experiences is both interesting to us and helpful to other readers, so please share your thoughts or questions below in the comments!