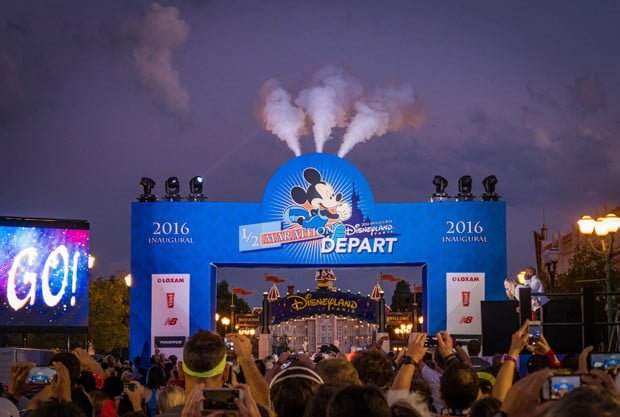 The next morning was the main event: the Inaugural Disneyland Paris Half Marathon. I had been excited about this for months, and it was the whole reason for the trip (not that we wouldn’t have enjoyed the trip otherwise), so expectations were high.

As usual, I was unprepared to run 13.1 miles. This time it wasn’t the normal “oops, I didn’t train” thing. Arguably, I had trained for this by running the Disneyland Half Marathon earlier in the month and by walking all over France.

Unfortunately, I had left my running shoes in Indianapolis, my back was hurting from carrying the camera bag everyday, and it turns out that even walking a ton per day isn’t enough to offset the toll eating a bunch of desserts each day takes on my body.

I was hardly worried, though, as the minimum pace for runDisney is pretty accommodating, so I knew if worst came to worst, I could walk. More than likely, I figured excitement and adrenaline would take control and I’d do fine.

The morning started out much like the previous one, with a winding walk through the Disneyland Paris resort area before ending up the start line. Once there, the same hosts from the previous morning were there to rev up the crowd. This is something I enjoy every race, and it was no exception here. 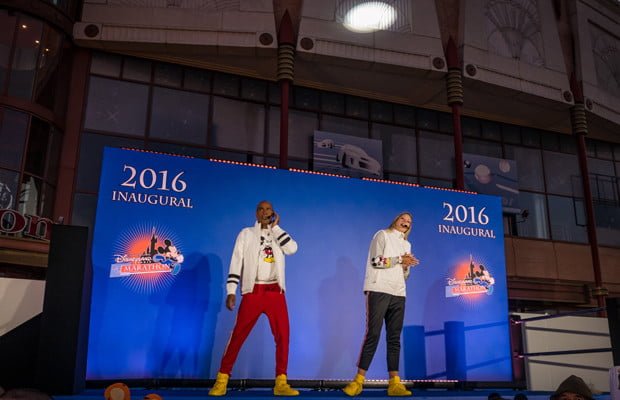 One thing I did notice was that these hosts seemed more ‘serious’ about the run than the stateside ones. The race being taken more seriously was obvious in a few regards, most notably that we (thankfully) received a post-race recovery box of food that was actually healthy, as opposed to the normal plastic nacho cheese and random junk. 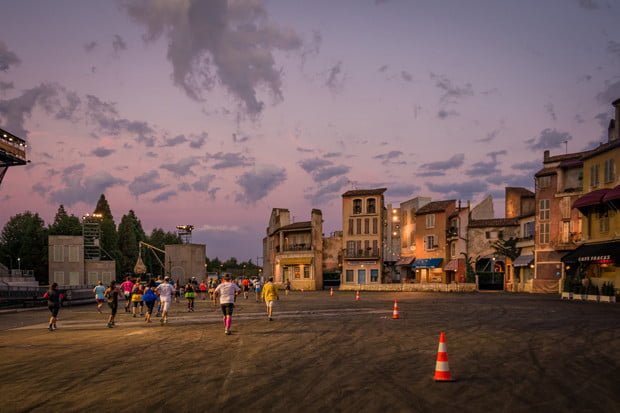 This time, the race started in Walt Disney Studios Park. I think that was the right decision, as it builds up to Disneyland Paris. 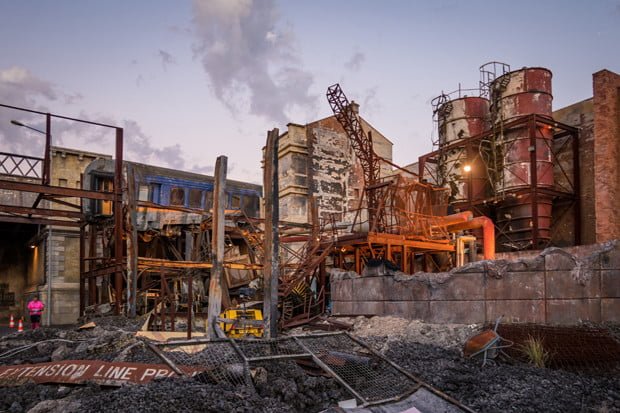 We ran through the set of Lights, Motors, Action! and a disaster scene in the Backlot Tour–again, the best ways to experience both attractions is by running past them–before heading into the rest of the park. 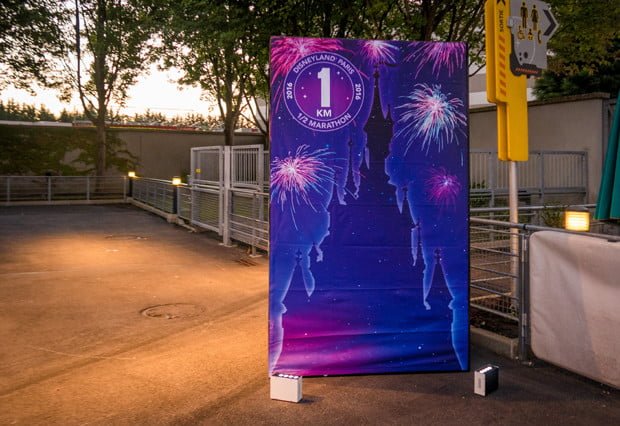 It was really cool to go through the ‘stage’ of these shows, and I think one thing a lot of runDisney participants (myself included) appreciate is seeing the parks from different perspectives. 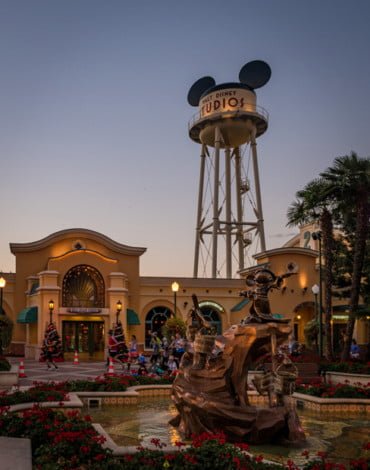 As you can see in this photo, it’s already Christmas in Walt Disney Studios Park, despite this being before the official start of Halloween season. I’m guessing they thought guests would just dismiss the decorations as more illogical WDSP hodgepodge? 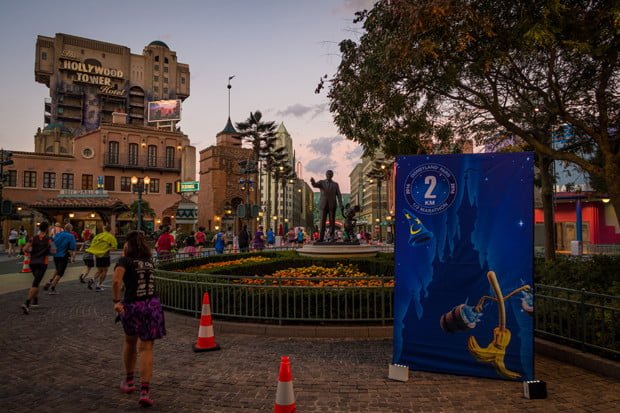 Look at all of those runners disregarding Walt’s wishes… 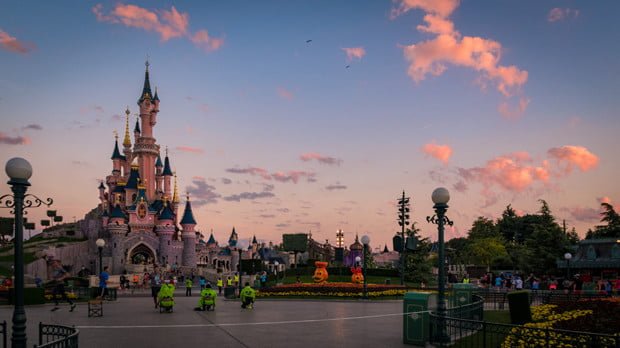 Starting in Walt Disney Studios Park meant getting to Disneyland Paris a tad later, right in time for sunrise. It was a pretty morning, and the clouds overhead looked liked puffs of cotton candy. 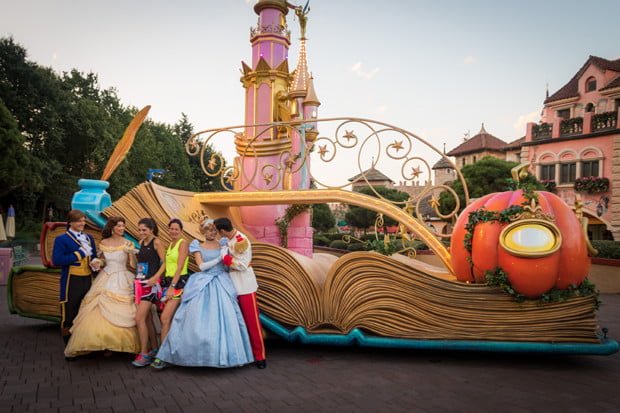 Once again, a lot of characters were out, particularly in Fantasyland. 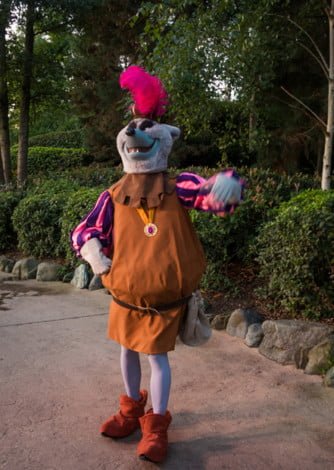 A lot of these characters were pretty rare, too. Apparently I just missed Cheshire Cat–a bucket list character for me–who was on rotation with the Alice in Wonderland characters in Fantasyland. I also missed the Sultan from Aladdin, another one for whom I probably would’ve stopped.

Once again, we spent a good deal of time in Disneyland Paris, and it felt like the course was maximized for as much park time as possible. We exited Disneyland Paris in Adventureland around the 5 km marker and then did another 1 km through backstage facilities. 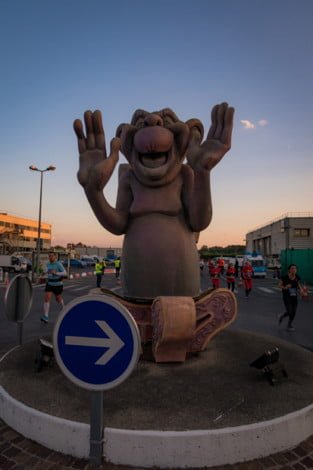 After the first 6 km of the race (I have no clue what this translates to in miles–probably something like 14), we were off into the mean, corn field-lined streets of suburban Val d’Europe. While nothing compares to running alongside a dried river basin in Anaheim or doing what feels like 35 miles through the ESPN Wide World of Sports in Florida, this stretch was somewhat dull. 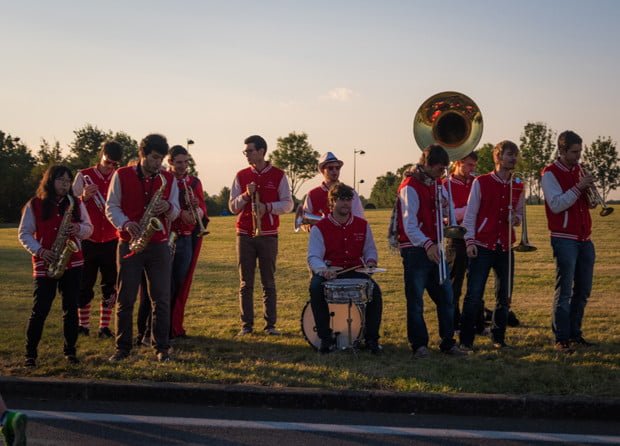 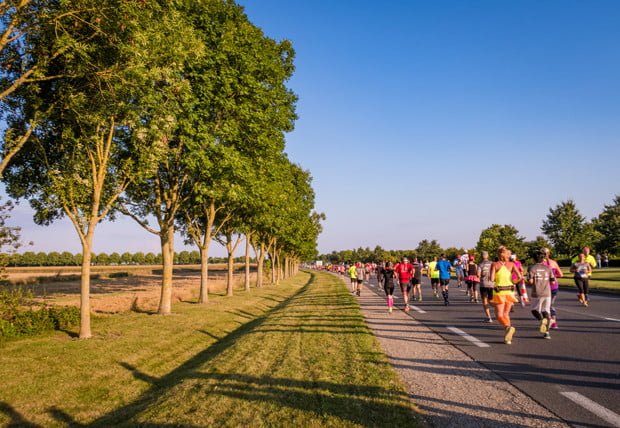 Still, even most portions of the course in Val d’Europe were pleasant. There was a stretch of roadway lined with trees that with fields just beyond the trees and another stretch at the edge of a lake, both of which were nice. 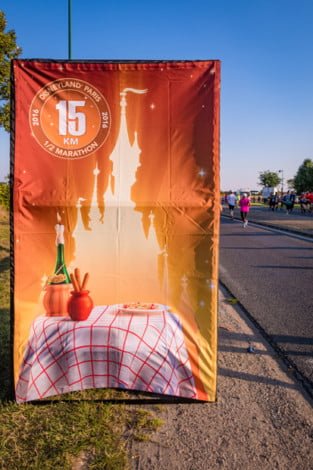 We also ran past an apartment complex (that looked like it might’ve been Cast housing?) where there were a number of people cheering on the runners. Moreover, there is something appealing about French architecture, even in the more cookie-cutter, suburban setting. All told, this made even the dull stretches of the course moderately engaging–but not something I’m pining to repeat. 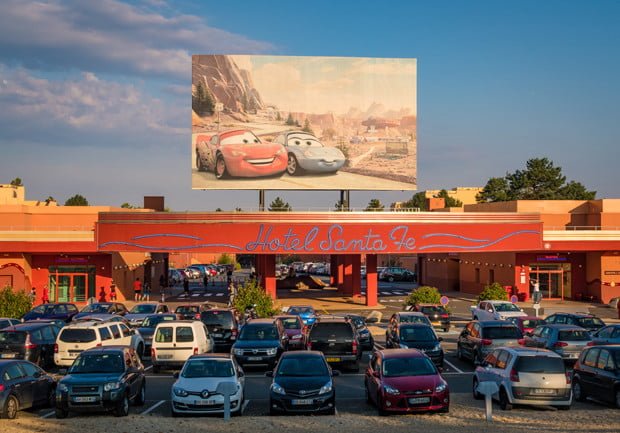 Following that, it was time to loop back into the resort area of Disneyland Paris. For me, this is arguably the best layout of any Disney resort worldwide. It has a huge footprint, but (unlike Walt Disney World) is entirely walkable.

I love the idea of leaving the park and being able to have dinner or drinks in any of the hotels. In my mind, Paris strikes the perfect balance between Disneyland and Walt Disney World. 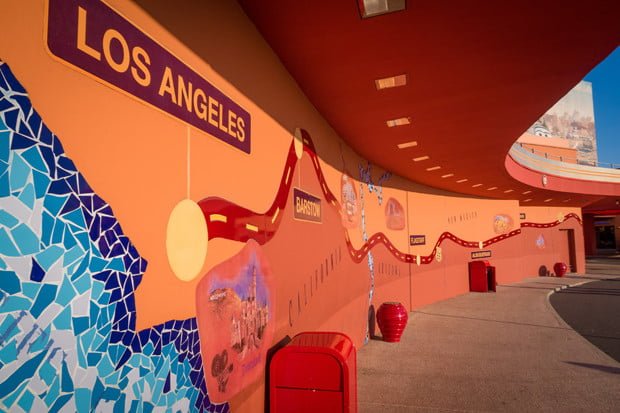 That footprint was used to full advantage for the final miles of the Inaugural Disneyland Paris Half Marathon, as we looped through or past every single hotel on property.

I felt compelled to stop and take the above photo, since this is where our journey started, driving (part of) that same route before heading to Paris. 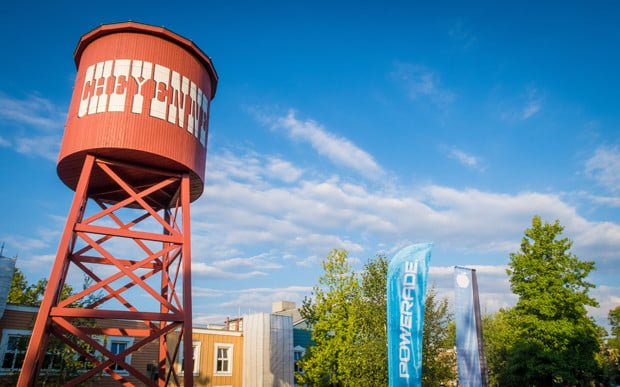 Hotel Cheyenne was the best portion of this stretch, and is the hotel best suited to having a race. Something tells me this was not a consideration when building the hotel… 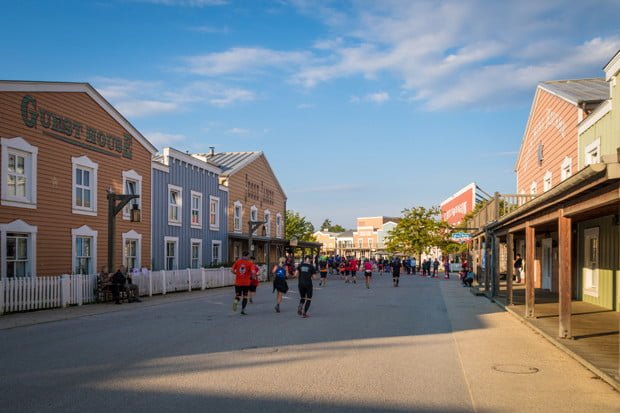 I still really want to stay at Hotel Cheyenne. Perhaps if we can figure out how to take advantage of the discounted Annual Pass rates, we’ll book it for next year. 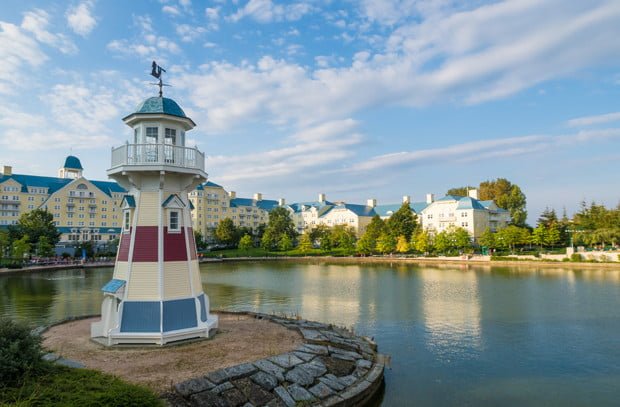 I’d also really like to do Newport Bay Club, but I’m guessing the rates will be higher than what we’re willing to pay. Perhaps a meal here, instead. (We intended to dine here this trip, but it got cut due to budget constraints.) 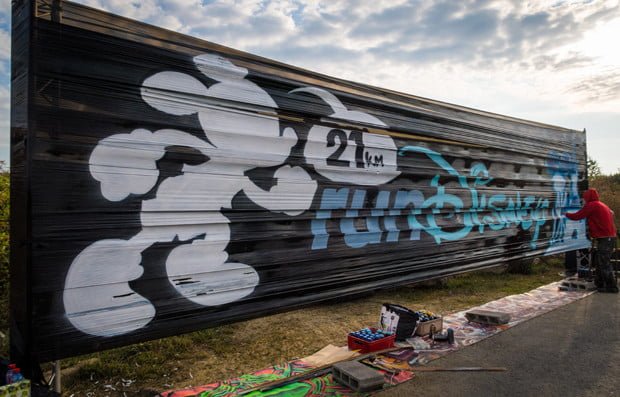 After running past all of the resorts and through Disney Village, we headed towards a backstage corridor. Perhaps 1 km before the finish line (or less?), there was this artist painting a runDisney banner. This was really cool, and felt appropriate for the venue. 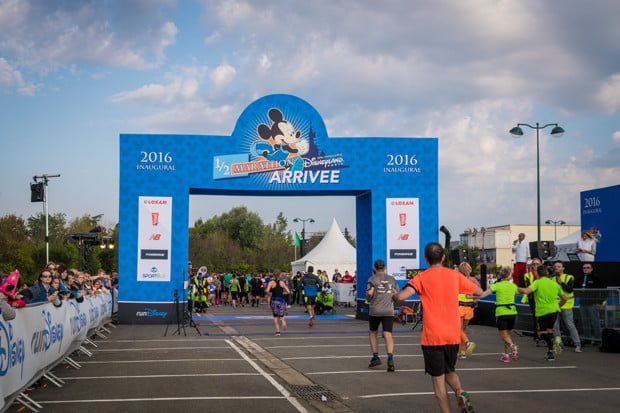 My time ended up being 2:12:36, which is about 10 minutes worse than my Dopey Challenge time from earlier in the year.

Still, I’m satisfied with that time. I stopped for a bunch of photos and was physically beat up going into the race. I’m not sure when I’ll run another race (I’m not registered for anything during the Walt Disney World Marathon and don’t intend upon doing the Disneyland Half this year), but I’d really like to break 2 hours for a half.

On Page 2, I’ll offer my take on the race weekend and some parting thoughts…