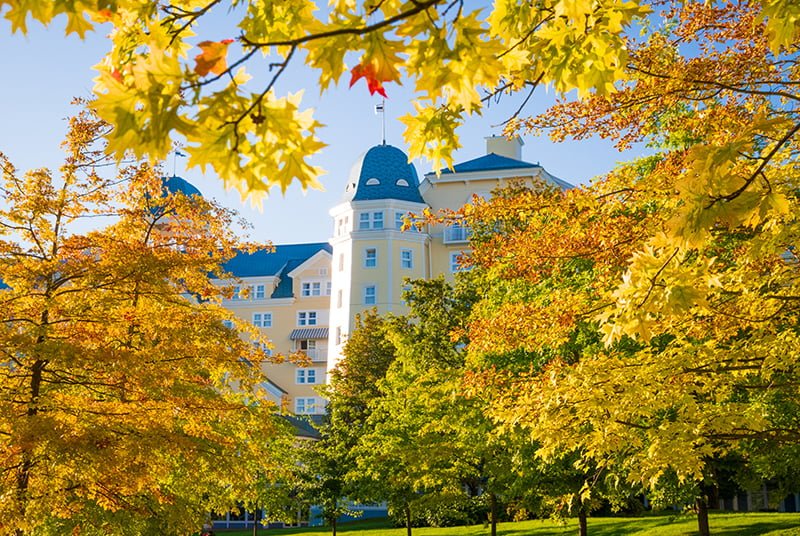 Newport Bay Club is a deluxe hotel at Disneyland Paris, with a nautical theme very reminiscent of Disney’s Yacht & Club Resorts. This review features room photos, thoughts on its quality, and our experience of staying at the hotel.

Recently, the resort underwent a massive, top to bottom refurbishment that lasted multiple years and renovated every single guest room, restaurant, shop, and even the convention center. Prior to that refurbishment, Newport Bay Club was in rough shape. I have photos showing the visibly dilapidated siding as well as the rough-looking lounge.

We’ve visited Newport Bay Club since the overhaul finished, and noticed a night and day difference in the common areas and exterior. The hotel looked brand new, and we were eager to book a room. We’ve been pricing it out for the last couple of years, but costs have always been prohibitive. We finally found a <$200/night rate via hotels.com, and decided to jump on it at that price…

For starters, we consider that price to be excellent (and rare) for Newport Bay Club. While it’s not quite Yacht & Beach Club caliber, it is considered a 4-star hotel. It’s also within walking distance of both Disneyland Paris theme parks, which is a big plus.

Our past couple of trips we’ve stayed in Val d’Europe because on-site Disneyland Paris hotels were too expensive. While that remained true this trip when pricing our stay out through the official Disneyland Paris website, we noticed hotels.com had this, Hotel Cheyenne, and Disneyland Hotel all significantly cheaper. Something to take a look at if you’re planning your trip to France. 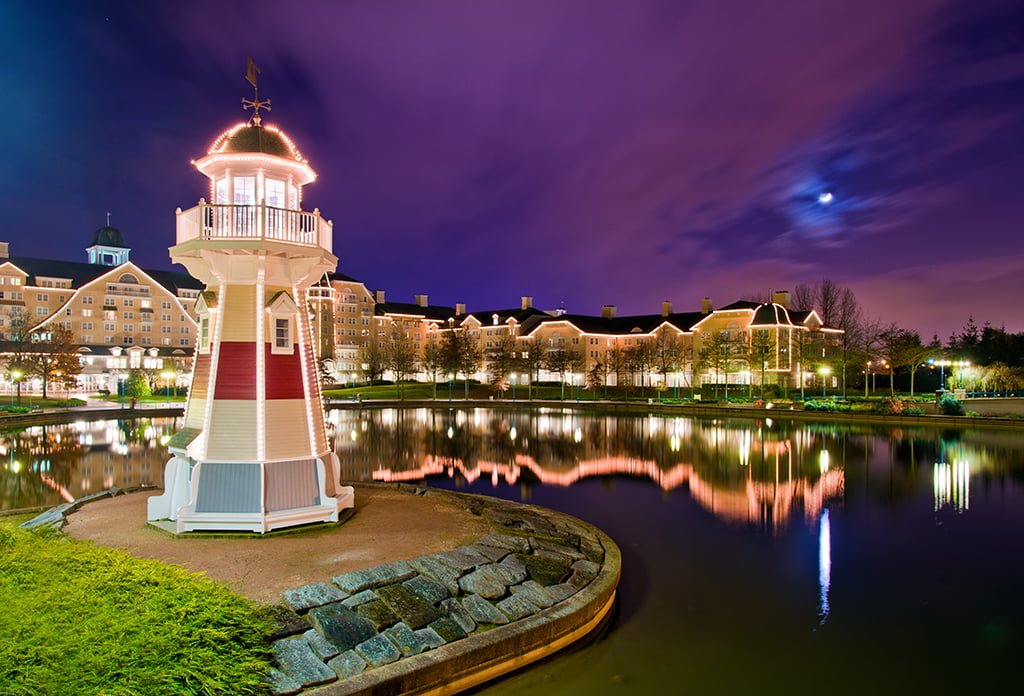 We weren’t kidding when we said Newport Bay Club is reminiscent of Disney’s Yacht & Beach Club Resorts. All three hotels were designed by Robert A.M. Stern Architects, and styled after classic New England beach cottage architecture. The exterior at Newport Bay Club uses a lighter, warmer color palette, but all have clapboard styling. Squint while looking at Newport Bay Club and you might think you’re at Crescent Lake.

With 1,093 guest rooms, Newport Bay Club is the largest hotel at Disneyland Paris. At the time of its opening it had more rooms than any other hotel not just in France, but in all of Western Europe. We’re not sure where it ranks today, but suffice to say, it’s a big hotel and still one of the largest in France.

Nevertheless, with all of the guest rooms located in a single building and wings from the main lobby, its size feels manageable. You might have a moderately long walk to your room, but not as long as what you could encounter at Disney’s Hotel Cheyenne or Hotel Santa Fe. 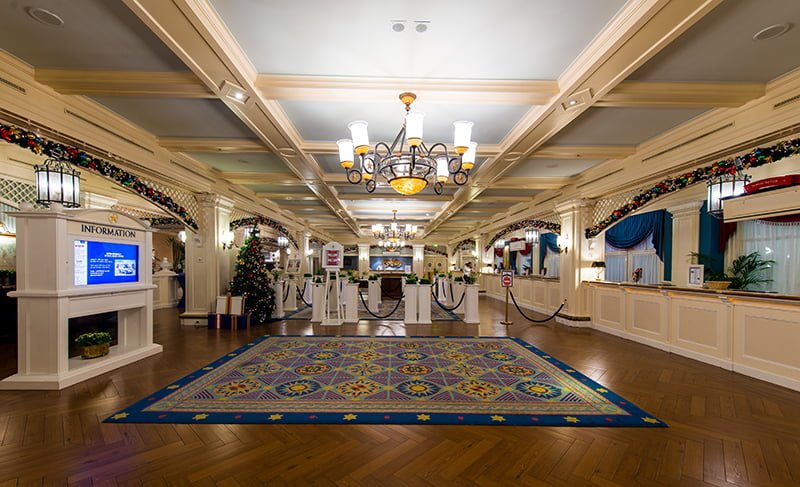 In terms of amenities, the top draw is always the pools. Newport Bay Club has two main pools: a cool indoor pool with a large boat at one end and an outdoor pool that’s fairly nondescript. Unfortunately, we didn’t pack swimsuits and I wasn’t quite brazen enough to take photos with people swimming in it. I’ll do the creepy blogger thing in the U.S., but France is another story. Suffice to say, I liked the indoor pool; it’s large and well-themed.

Next up is dining. Newport Bay Club has two main restaurants: Cape Cod and Yacht Club. The former is the hotel’s buffet restaurant for guests who purchase the half-board and full-board dining plans. We’ve done this before at other Disneyland Paris hotels, but our stay this time was room-only. 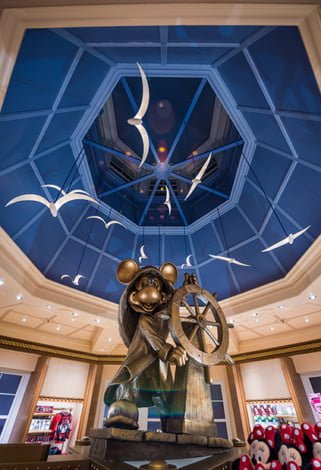 Yacht Club is the resort’s fine dining restaurant, and we had heard multiple positive reports about its new menu since the refurbishment, so we were really looking forward to dining here. Unfortunately, it was closed during our stay. Per the Disneyland Paris website: “as part of our continuing efforts to exceed the expectations of our Guests, this restaurant is closed today.”

I’m not sure how closing a restaurant helps exceed expectations, but whatever. Our stay at Newport Bay Club was during the off-season, and most of the in-park restaurants at Disneyland Paris were also closed. That was more frustrating, but it’s another story for another post.

Finally, there’s Captain’s Quarters, the resort’s lounge. Per Disneyland Paris, it’s a “nautical themed bar for an aperitif served amid the elegant world of regattas and racing yachts.” We’ve done late night meals here before after the parks have closed, and found it to be hit or miss. For food, overpriced and undersized portions. This trip, we stuck to Five Guys and Earl of Sandwich for our late night meals instead–zero regrets there. 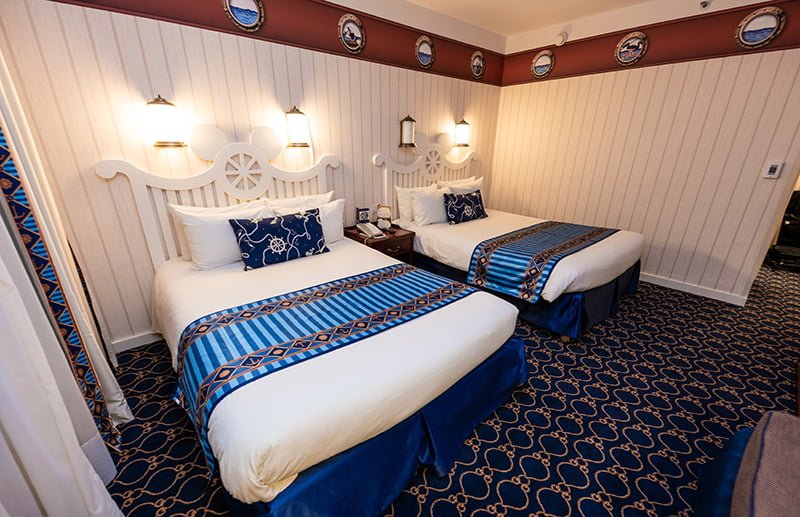 Our first impressions upon entering our room at Disney’s Newport Bay Club were positive. The decor strongly resembles the inside of a ship’s cabin, the furniture is reminiscent of traveling trunks, and the color scheme has a nautical vibe. In in all, it feels a lot like cabins in which we’ve stayed aboard Disney Cruise Line, except more spacious.

Initially, we are both impressed. This wore off a bit as we started perusing the room saw very noticeable wear and tear. Corners that are dinged up, wallpaper that is peeling off the wall above one of the bed (very much visible in these photos), the handrail partially ripped off the bathtub wall.

With minor wear and tear, we’re usually pretty deferential to hotels. Things can be missed during room inspections and not everything is immediately repaired.

However, both the peeling wallpaper and handrail would be readily apparent to anyone who takes a cursory 30 second tour of the room. Given Disneyland Paris’ past issues with maintenance and upkeep, we’re inclined to believe these are known issues–and probably not unique to our room–that management has made a conscious decision not to repair. 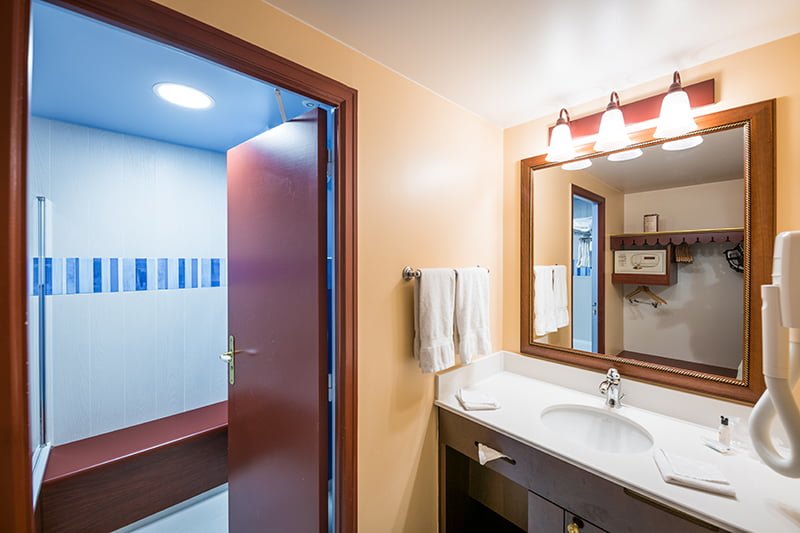 Probably a matter of “user error” but it confounds me that European hotels don’t have full doors on their showers. This is hardly isolated to Disneyland Paris hotels, but how do people bathe without getting water all over the floor?

Perhaps I’m just really bad at showering. (In which case, you might be wondering whether you can really trust the opinion of someone who can’t properly complete such a basic task.) 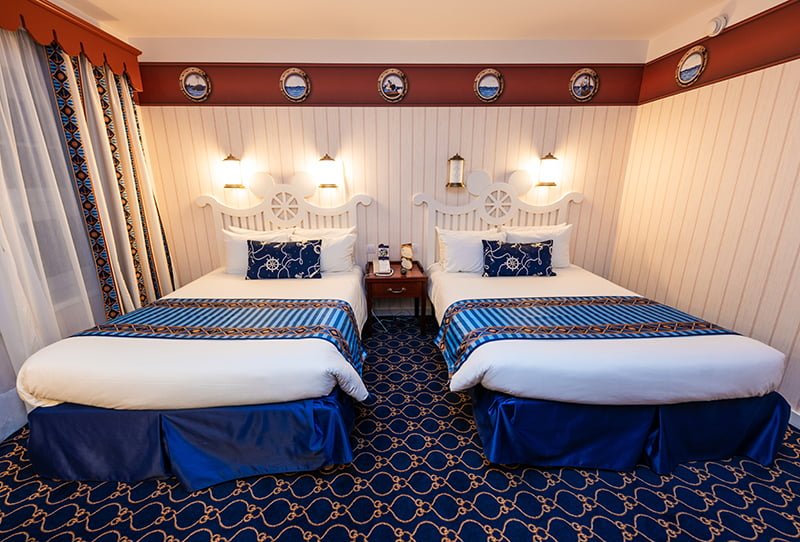 In terms of positives, the beds and pillows were incredibly comfortable, the desk was nice, and we really liked the scent of the H20 shampoo (random…but valuable info!). Setting aside the maintenance issues, the room felt appropriately-themed and distinctly Disney.

Some touches–like the portholes on the wallpaper–might feel a bit cheesy for a luxury hotel that caters to convention guests, but they were fun. Even with all of my complaints, I really liked the room. For my tastes, it had the right balance of theme and luxury. 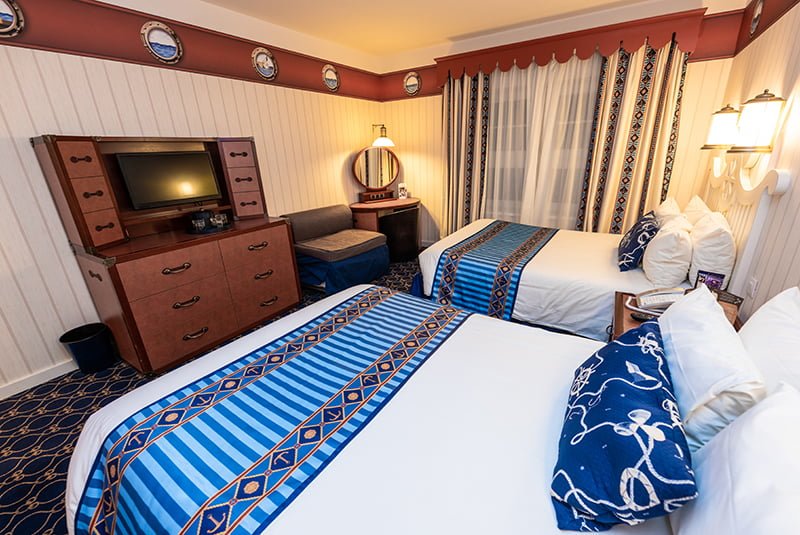 Our final verdict with Disney’s Newport Bay Club Resort is a tough one. The story here is one that mirrors that of the parks at Disneyland Paris: good design, poor upkeep. We were quite pleased to see the Imagineering decisions made during the top to bottom refurbishment retained the resort’s style, and balanced modern furnishings with theme very well. We were disappointed to see that only 2 years later, upkeep has fallen back into its old ways. Then again, perhaps we just got unlucky with the room. Ultimately, Sequoia Lodge remains my personal favorite among the Disneyland Paris hotels, but we’d stay at Newport Bay Club again if the price is right because we do love the design and location.