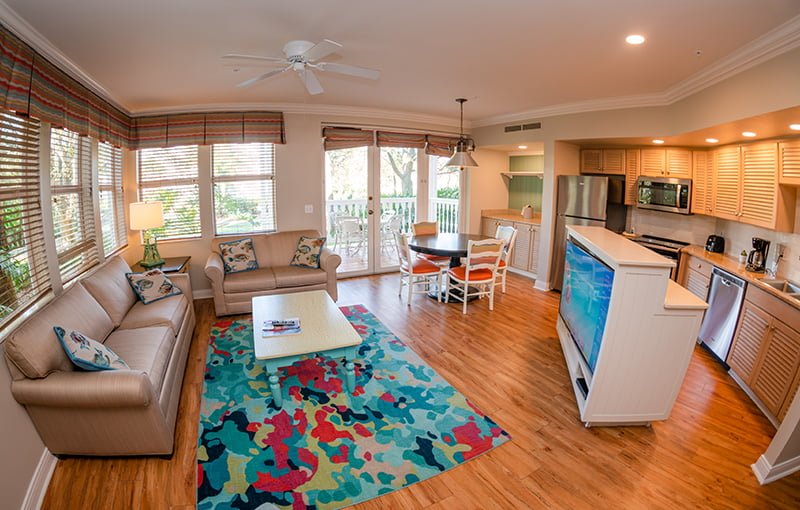 Walt Disney World is currently in the process of a 2-year refurbishment project at Old Key West that will modernize all of the guest rooms in this large DVC resort. We recently stayed in a refurbished villa, and thought we’d share new photos of these redesigned hotel rooms, our experience with the re-imagining, and other thoughts.

This project is a top to bottom hard goods refurbishment, updating kitchen appliances, replacing or reupholstering all furniture, altering wall and window coverings, replacing flooring, completely updating bathrooms, and more. Between the scope of the work and the number of guest rooms at Disney’s Old Key West Resort, it’s a longer project than the normal hotel refurbishment at Walt Disney World.

You might recall that Old Key West last received a major refurbishment in 2010 and 2011. We stayed at the resort both years, getting an old room once and a new room once, the photos of which you can still see (for now) in our soon-to-be-updated Disney’s Old Key West Resort Review. At the time, the modifications were the most extensive in the history of the then 20-year old property. Suffice to say, this is a significantly larger project…

During Old Key West’s last refurbishment, the flooring was updated, as were kitchen counters, upholstery, televisions, and some furniture. The fold-out sleeper chair was also added, but bathrooms were largely untouched and a lot of furniture was simply refinished.

If you compare before and after photos from the previous refurbishment, you’ll notice some similarities in the room design. While the look shifted from something reminiscent of decor in Golden Girls to a slightly more modern style, but still containing a laid-back beach vibe.

We liked that new look at the time, but in retrospect, it didn’t exactly age well. It’s unclear whether guest feedback to the results of that refurbishment is what accelerated the schedule for a hard goods refurbishment, or if it’s simply a matter of Disney Vacation Club transitioning to a different, more condensed refurbishment schedule–one that has resulted in dramatic transformations at a number of older resorts (with Saratoga Springs up next!) that led to this refurbishment. 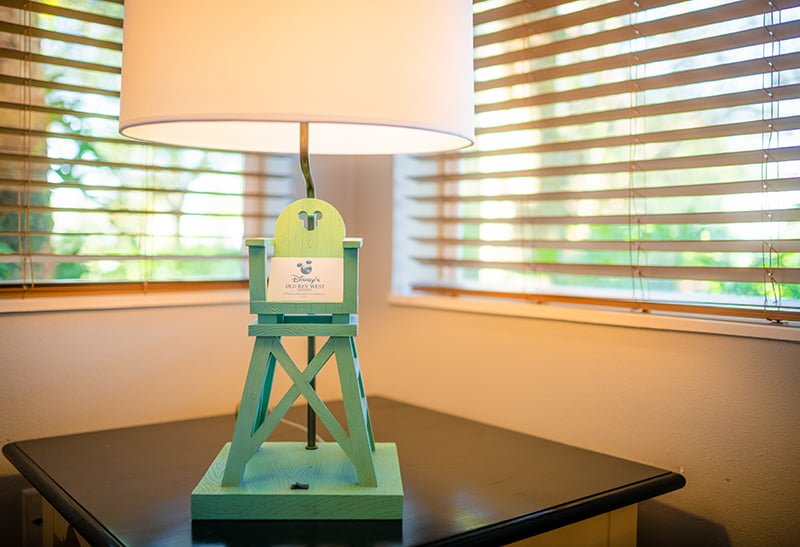 We’ve been waiting to stay in the new Old Key West studios until the refurbishment was nearly complete, but our friends at DVC Rental Store, a sponsor of the site, invited us to a 2-bedroom unit instead. (Read our Tips for Renting Disney Vacation Club Points post, which offers great ways to save money on accommodations like Disney’s Old Key West Resort.)

This was probably for the best; not just so we didn’t have to use our own points, but so we could see a nicer room and get photos of, essentially, three different types of rooms. Including two that are actually quite nice. 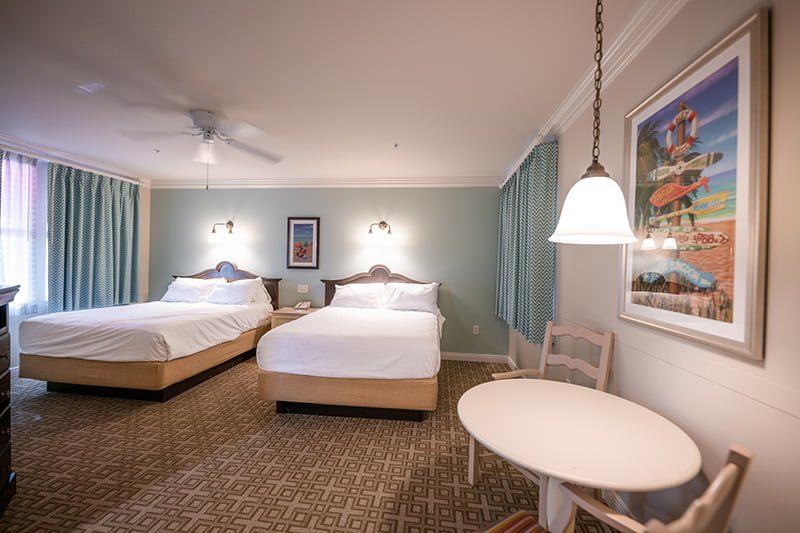 Upon seeing photos of the Old Key West studios several months ago, we were not impressed. Some Walt Disney World fans have complained that Pop Century is sterile and feels like a hospital room, but at least that resort didn’t have much going for the rooms in the first place, and the new looks have splashes of color via pop art.

Old Key West, by contrast, went from having tropical rooms with a fair amount of personality, to ones with a lot of white and neutral colors. If comments we’ve read are any indication (and they aren’t necessarily–DVC members active in the online community are definitely more diehard than the average member, and likely care more about theme than others), the new studios are not a hit. 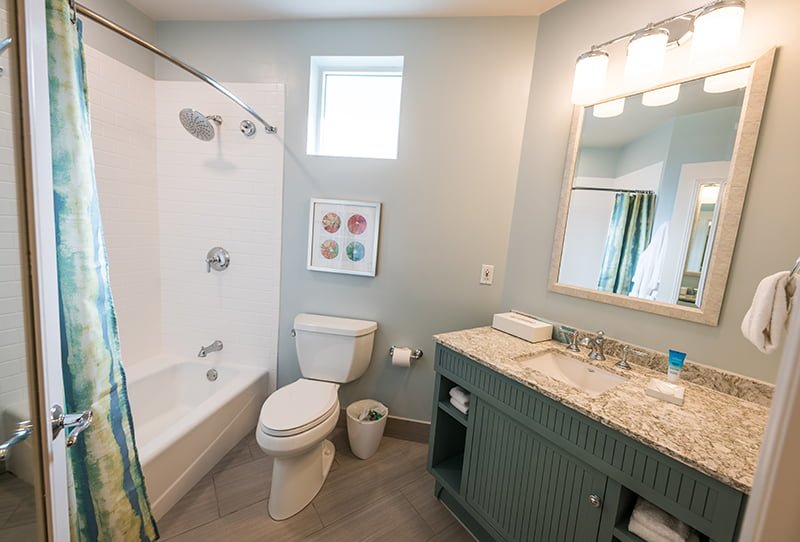 What’s really odd about this is that Disney Vacation Club didn’t have to reinvent the wheel.

The refurbishment of Vero Beach a couple of years ago was largely well done, and while it wasn’t universally lauded, our “straw poll” of members found people generally liking it. Recycling that with a few stylistic tweaks and color palette changes would’ve worked perfectly. 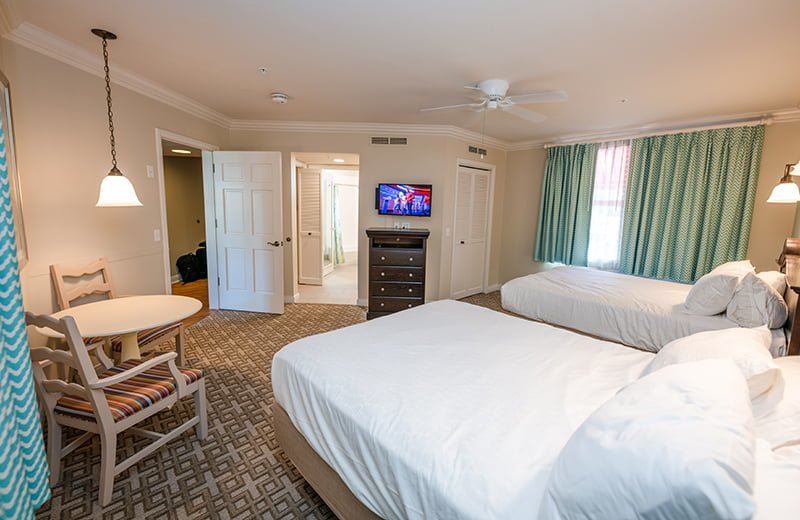 We’ve brought this up before with regard to other recent Walt Disney World room refurbishments, but this would be enhanced tremendously by a bed runner.

This is a hill I’m willing to die on. I don’t care if bed runners are (supposedly) less sanitary. I don’t care that they are only on the bed for 30 seconds before prompting being thrown into the corner. First impressions are important, and a tropical reef with some colorful tropical fish, or (better yet) a bunch of Hemingway’s polydactyl cats would’ve been nice. 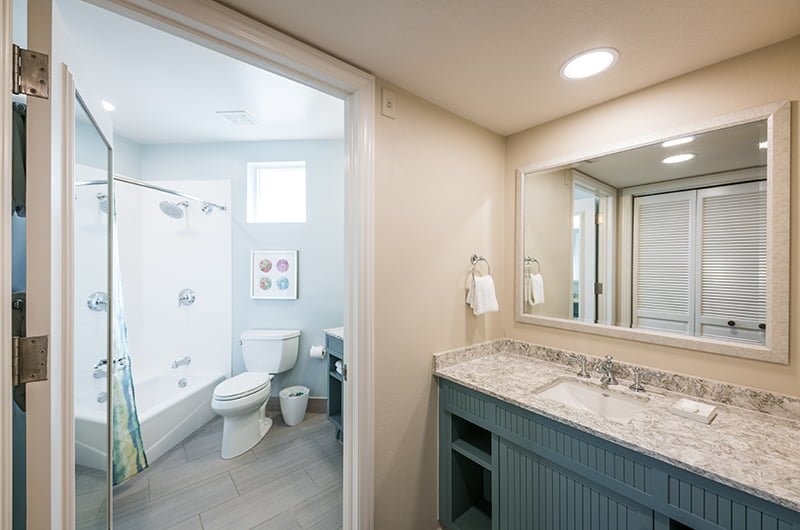 The changes to the studio bathroom are fine. I don’t recall what’s in the photo over the toilets, but in these photos, it sure looks like donuts. I really hope that’s accurate.

Back to the important stuff–the bed runners. Vero Beach, Copper Creek, and the Polynesian Villas have them (just to name a few). I was really hopeful that Disney Vacation Club was resisting the anti-bed runner movement, but it appears hit or miss. I’m half tempted to attend the next Condominium Association Meeting and at the Q&A, be the crazy person who just goes on a 5 minute rant about bed runners. Don’t force my hand, DVC. 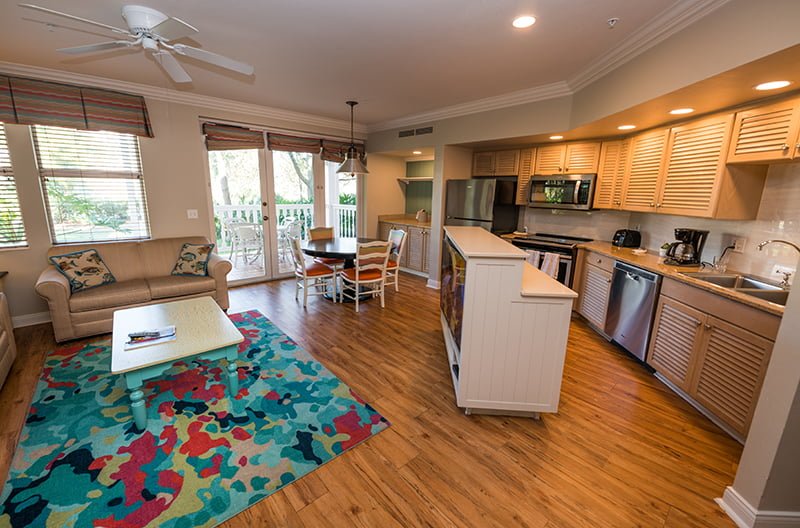 The good news is that things are significantly better in the 2-bedroom units and the 1-bedroom units, which have much more personality and color.

The rug really ties the room together. (No joke.) 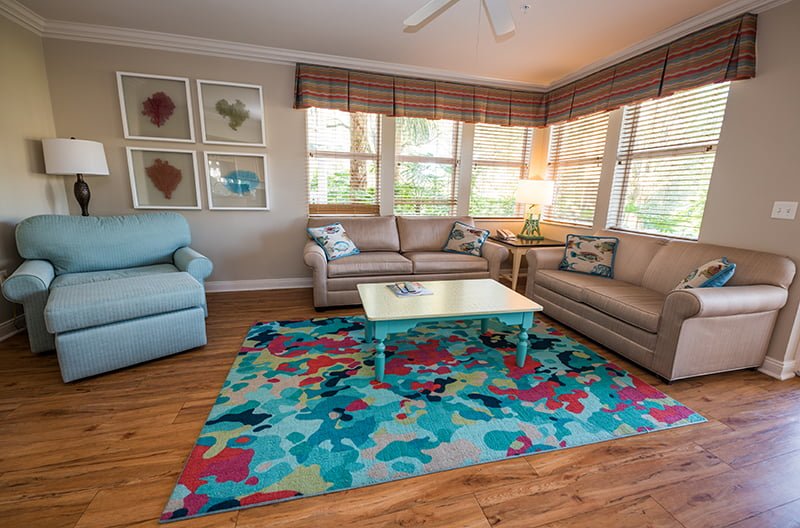 There are also themed throw pillows, artwork, and fixtures. The furniture is less on theme, but it’s sufficiently neutral that it’s not really a pro or con.

The rug is really what punctuates the room and gives it a semblance of the tropics. While it’s arguably too modern for this quaint resort, it’s still a lovely design. I wouldn’t mind seeing it used elsewhere, perhaps in a bed runner?! 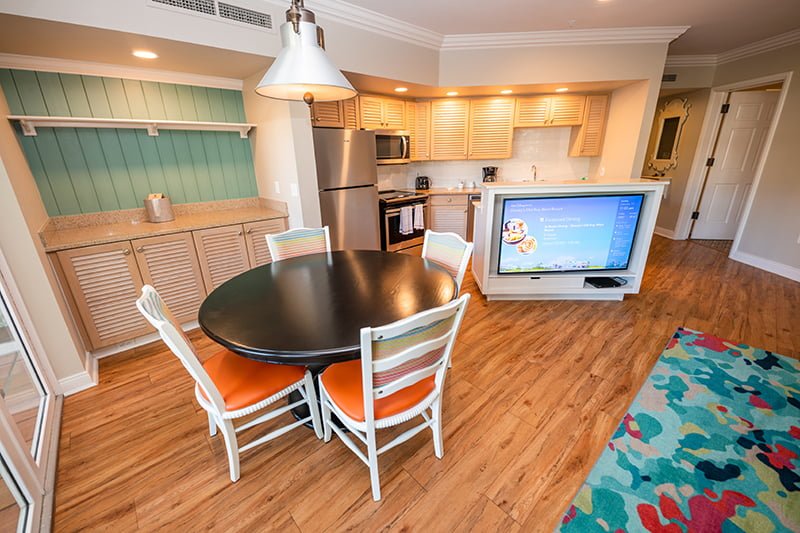 Some of the upholstery also feels appropriate, even if it’s not overtly themed. All in all, I think this main living room looks really nice, and is a big improvement over its predecessor.

The old rooms were definitely showing their age, and 1990s sensibility. 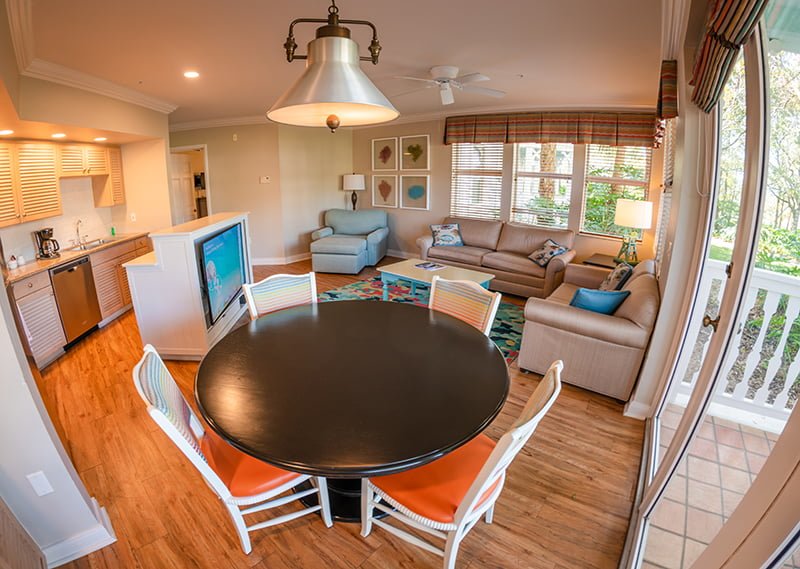 The lush vegetation outside the rooms is more apparent at Old Key West than any other resort (at least, in our experience), and this provides a natural extension of the theme. 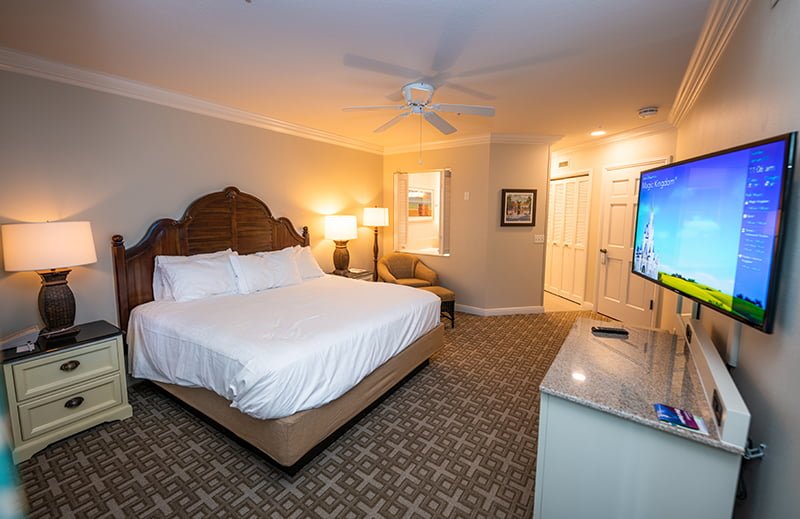 Thematically, the master bedroom is a snooze.

More should have been done to give this personality, as it just looks so generic. 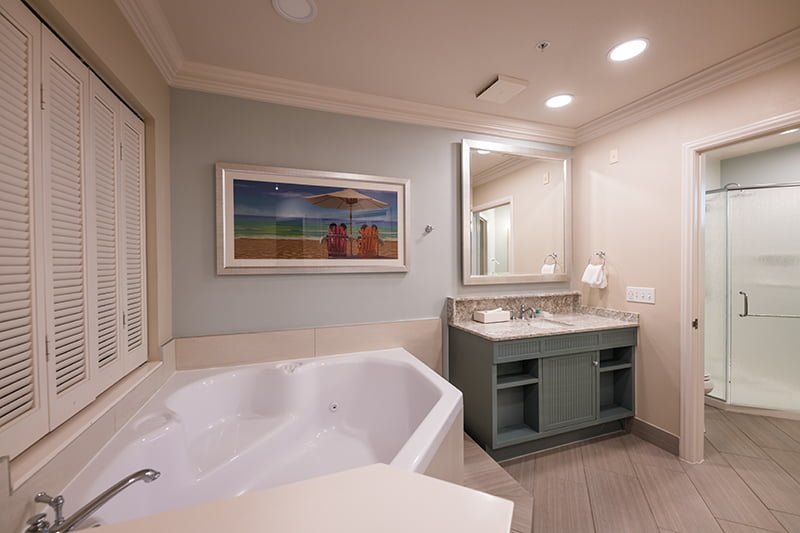 The bathroom is likewise nice, but bland.

The exception there being the Minnie & Mickey beach art. I’m a sucker for that design. 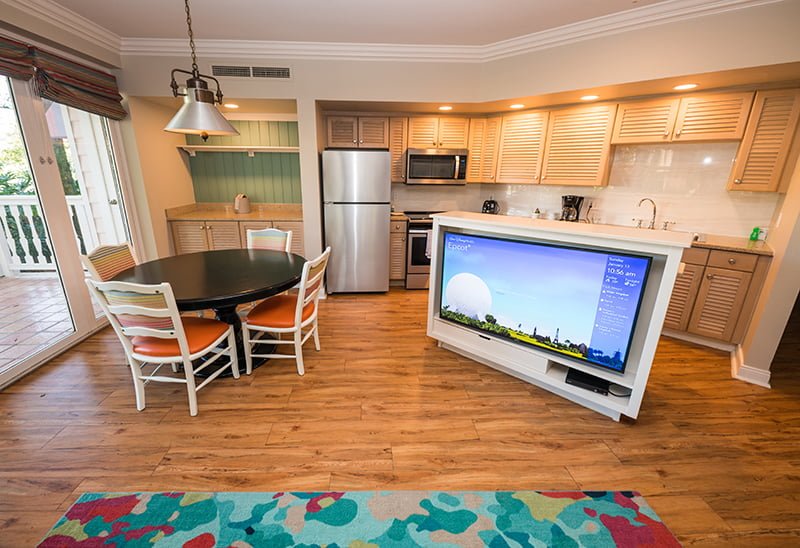 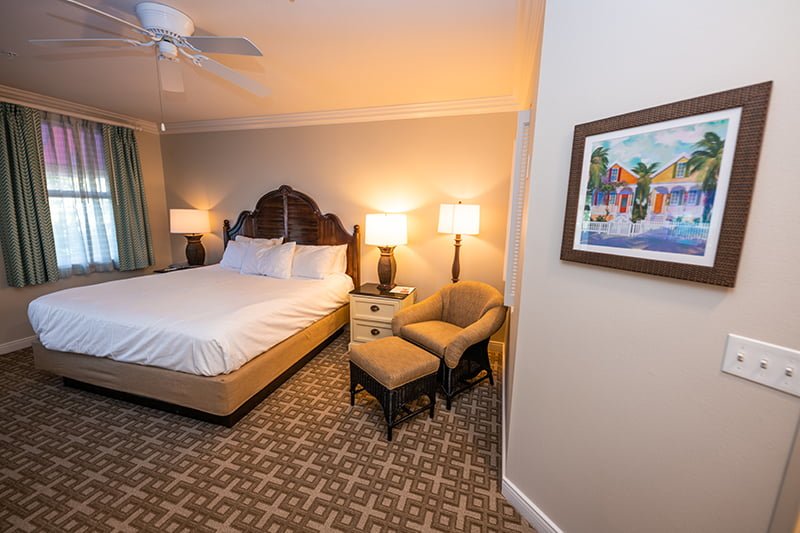 The Old Key West room overhaul has taken longer than originally expected thanks to various delays. The pace now appears to be moving faster, but we’re still expecting this to not be totally finished by May 2019. In the meantime, about 75% of the resort is finished, so your odds of receiving a new room are pretty great unless you’re in the Hospitality House booking category.

Overall, we view the new rooms at Old Key West as a mixed bag, which is the only consistency when it comes to recent Walt Disney World room changes. The sleeping spaces of the bedrooms are dull and look like they could be rooms found at any chained-brand hotel in the world. While it’s nice they’ve received new furniture and an aesthetic refresh, DVC owners at Old Key West (of all places) seem likely to be the most die-hard Walt Disney World fans, and most likely to appreciate good themed design. Bed runners would be an instant, easy-to-implement addition. From our perspective, the saving grace of the project is the living room room, which feels appropriately themed, fresher, and more modern. It’s not perfect, but at least that component is a win, and elevates the 1-bedroom and above rooms into “good overall” territory.

What do you think of these new rooms at Old Key West? Excited for the redesign, or do you think the new look is too bland and generic? Thoughts on the bedroom spaces versus the living room? Anything of your own to add? Have you stayed in one of the new rooms? Any questions about these rooms? Share any questions, tips, or additional thoughts you have in the comments!