It’s been a few months since Disney announced a land based upon Marvel super heroes would be replacing ‘a bug’s land’ at Disney California Adventure, and we haven’t heard any concrete details or official updates on the project since. In that announcement, the only details provided were that the Guardians of the Galaxy would be joined by Spider-Man and the Avengers in a completely immersive Super Hero universe, furthering the evolution of Disney California Adventure.

To recap, “It’s Tough to Be a Bug” closed March 19, 2018 and that building will comprise a large portion of the first attraction to open in this Marvel land. The rest of ‘a bug’s land’ will close after the summer tourist season, and work is expected to begin shortly thereafter to meet the 2020 opening goal for the first phase of this project.

Despite the dearth of official info, it’s been widely assumed one of the rides would be an indoor Vekoma bike coaster and another being an Avengers dark ride similar to what Hong Kong Disneyland is receiving. Today, we have some rumors about phase 1 of these plans, known as the Golden State Expansion Project…

We’ve received credible word that the Disney California Adventure land will be an Avengers campus set in real-world Southern California. It will be a place where Marvel super heroes can share their technology and methods of helping the world with the public. This super hero campus will feature two attractions (one in phase 1), two merchandise shops (one in phase 1), and a microbrewery/counter service restaurant all connected by a small quad space and various avenues.

The phase one attraction will be a family-friendly, interactive 3D ride that will be an expansion of the existing ‘It’s Tough to Be a Bug’ theater. A large portion of the additional attraction space will be queue, which will abut the existing ‘a bug’s land’ restrooms (to remain and be updated).

In addition to this attraction, there will be a number of “Heroic Encounter” meet & greets and entertainment offerings throughout the land, primarily in the central quad of the campus. Entertainment will apparently play a large role on the campus, as even one of the gift shops has a two-level performance space. 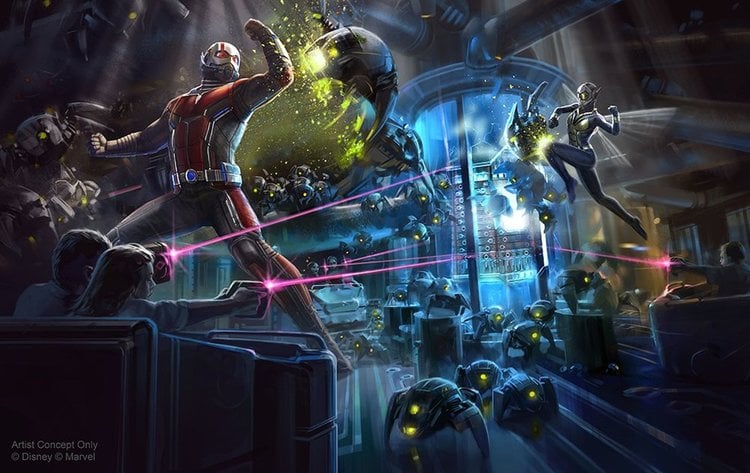 Attraction-wise, I’m guessing the first ride will be a screen-heavy dark ride judging by the limited space of the show building, and I think that could work as the first, shoe-horned option. I wouldn’t be surprised if this is similar to the Ant-Man shooter game attraction being built at Hong Kong Disneyland (that’s HKDL concept art above), except perhaps with a different character (shooting Spider-Man webbing would be a good fit). That’s not at all part of this rumor, just a complete shot in the dark on my part.

We have no updates on the long-rumored indoor Vekoma bike coaster. Given that the phase one attraction will be a family-friendly, interactive 3D ride, that’s certainly not going to be the first attraction. Whether that bike coaster is still coming in phase two or the second attraction is something different entirely remains to be seen–we have no further insight on that.

The microbrewery is also an interesting choice for a Marvel land, and this location is fairly large. It appears the microbrewery will double as a counter service restaurant, and will act as something of a buffer between Guardians of the Galaxy – Mission: Breakout and the rest of the campus.

It’s unclear what the conceit of this location will be, or the #story justification for getting people drunk in a place existing to teach people about helping the world, but whatever. Alcohol is high-margin, so of course it’s going to play a large role on campus.

Then there’s the campus and setting itself. Since rumors of Marvel Land began surfacing a couple of years ago, many fans have questioned how the land would fit within Disney California Adventure. Well, it would seem we have our answer with this rumor of a Southern California Super Hero Campus, which will not be self-aware as to its in-park location. (As “Marvel” cannot be used in the land’s name, we wouldn’t be surprised if the final area is called something akin to “Super Hero Campus.”) 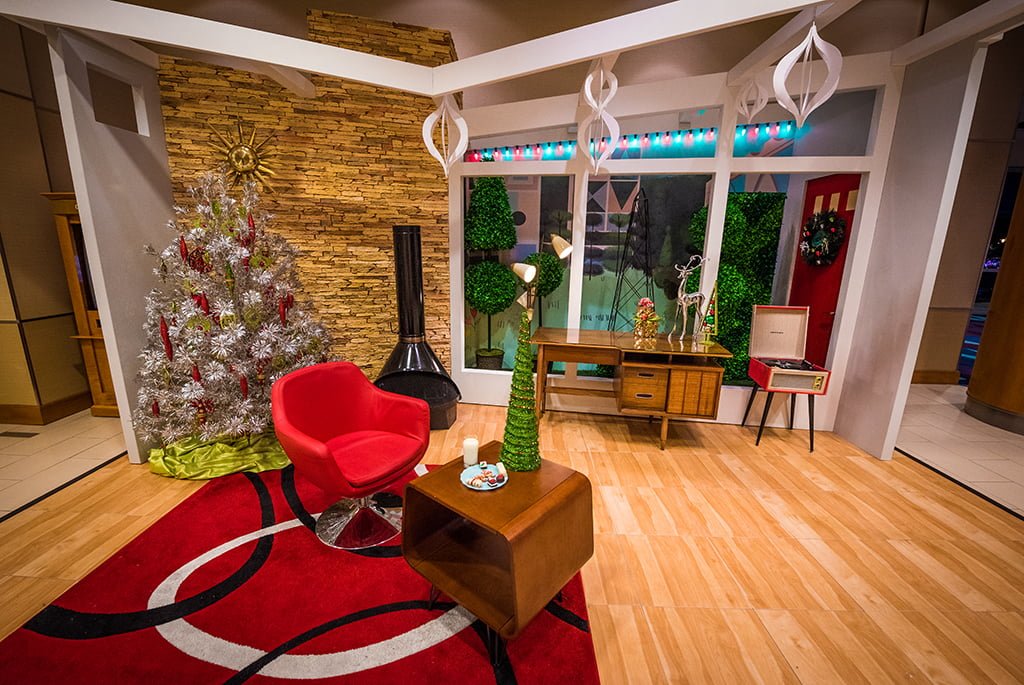 It’ll be interesting to see how, if at all, the setting will actually resemble SoCal. Will it just be lip service, with a futuristic design, or will the Imagineers draw from the Googie, Space Age, or Mid-century Modern locations that dot Southern California. Glendale-based Imagineers have demonstrated no timidity in drawing from real world locales in their own backyards with recent designs at Walt Disney World…will the same be true here?

Personally, I have mixed feelings about this approach. Realistically, I don’t think there are any iconic environments in any Marvel films that could easily be replicated in a theme park. Sure, Wakanda and Asgard are cool, but getting those right in a park would be near-impossible without copious amounts of CGI, and neither are even remotely good fits in DCA. The Marvel setting of my mind is a New York City-like place, but nothing says that’s what it must be.

Ultimately, this is something with which I’m willing to take a wait and see approach. If Imagineering creates some eye-catching architecture that evokes Southern California and is akin to the creative campuses around the region (including several belonging to Disney!), I think this could work.

What do you think of the Avengers Southern California Campus? Is this an interesting and workable conceit for a Marvel Land at DCA, or would you prefer something else? Thoughts on the rides, microbrewery, gift shops, or anything else? Any questions? Hearing your feedback is both interesting to us and helpful to other readers, so please share your thoughts or questions below in the comments!