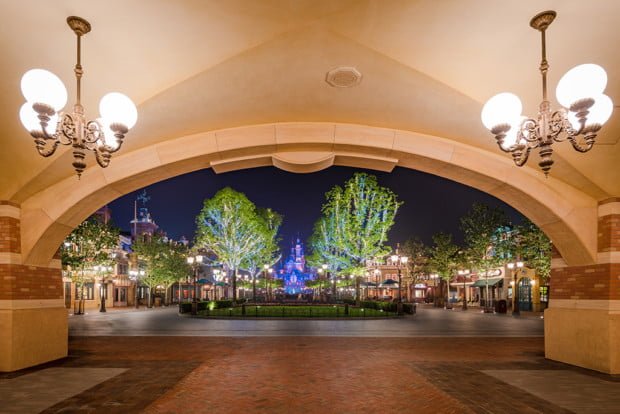 We ended Part 1 of our Shanghai Disneyland Grand Opening Trip Report as Sarah and I ate lunch, after splitting up from Mark and Molly so they could watch Mickey’s Storybook Express parade. Once they were done blowing kisses to Olaf, we rejoined them. That’s where we’ll pick up in this spoiler-free trip report installment…

Wanting to soak up more of the ambiance of opening day, we did some wandering. By this point, we had walked through every land, and the clear favorites were Adventure Isle and Treasure Cove. Each of these lands have flashes of Tokyo DisneySea, albeit without quite that same level of detail.

While in Treasure Cove, we noticed Pirates of the Caribbean – Battle for the Sunken Treasure had “only” a 30 minute posted wait. Given the triple-digit waits for Roaring Rapids and Soaring, doing this again seemed like a no-brainer. Before getting in line, we inquired about Single Rider, only to be told “no” a few times because we had multiple people. This ended up not being a big deal–while having this conversation, we noticed no one was entering the left side of the standby line on Pirates. We did, and it was essentially a de facto FastPass line as a result.

I took photos on Pirates this time, but I’ll save those for a later post. The attraction was just as good the second time, and I’m looking forward to covering it in meticulous detail at some point. Suffice to say, I noticed details this time I had missed before, and remained in awe at some of the Audio Animatronics and other visuals throughout. The Pandora N’avi River Journey is rumored to use the same ride system, and while I don’t expect it to be as ‘epic’ of an attraction, I’m salivating at the thought of a boat ride through an extraterrestrial, bioluminescent landscape. (Maybe I will get my Terrapin Station scene, after all!) 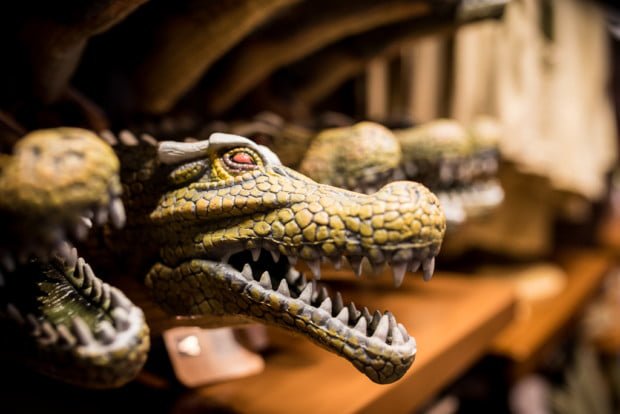 While in the area, we stopped in Laughing Monkey Traders in Adventure Isle. This is essentially the gift shop for Roaring Rapids, which has the most merchandise of any attraction at Shanghai Disneyland. (Interestingly, the most popular attraction, Soaring Over the Horizon, didn’t have any merchandise–or I missed it.)

It was a little surreal to see so much Q’araq merchandise only a day after the tragedy in Orlando, and I was half-surprised Disney didn’t pull it. Not because it’s disrespectful halfway around the world, but because it would’ve only taken one out-of-context viral photo on social media of someone wearing a Q’araq tail or hat to cause more PR headaches. The above is actually a glove for eating turkey legs; I wanted to get it, but opted against it. 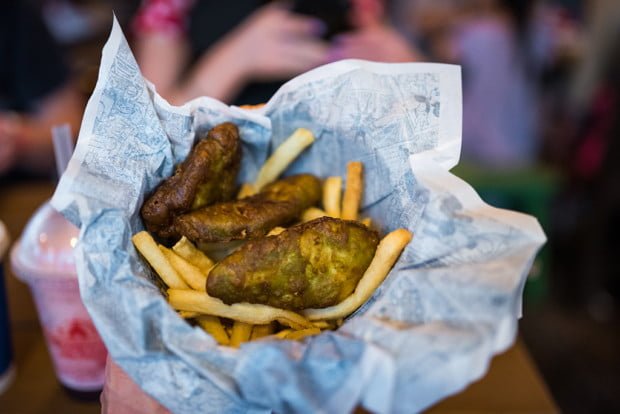 Mark and Molly had yet to eat, so we headed to Tangled Tree Tavern. Although we had a huge meal a little over an hour ago, I decided to order fish & chips in the name of “research.” Mark and Molly also enjoyed their meals. So far, 2/2 on the dining front at Shanghai Disneyland.

We timed this meal perfectly, as it really started raining almost as soon as we got inside the restaurant. A deluge of such magnitude that the world’s greatest waterfalls flowing together for more than a million years would only begin to approach its results. For when it finally stopped, well…the sidewalks had some puddles, but it didn’t rain again the rest of the day, so maybe I embellished just a bit there. 😉 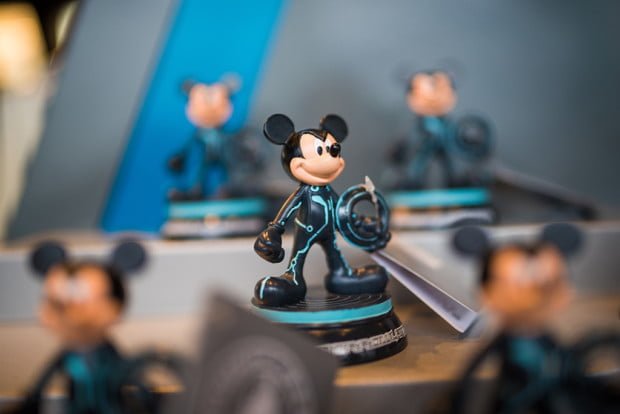 Fully stuffed, it seemed like the perfect time for an intense roller coaster, so we headed to TRON Lightcycle Power Run to redeem our FastPasses. As mentioned in the first installment, we wanted to do this at night, but we had decided to play it safe with FastPasses and get earlier ones. With the wait now steadily climbing, we decided to just do it.

Along with Pirates, this is probably the most hyped attraction at Shanghai Disneyland. Admittedly, my expectations were low. I’m that pretentious fan who often is more about “attractions” (found at Disney parks) than “rides” (found at amusement parks), and I worried this would rest of the allure of the Lightcycles, but otherwise be unthemed. 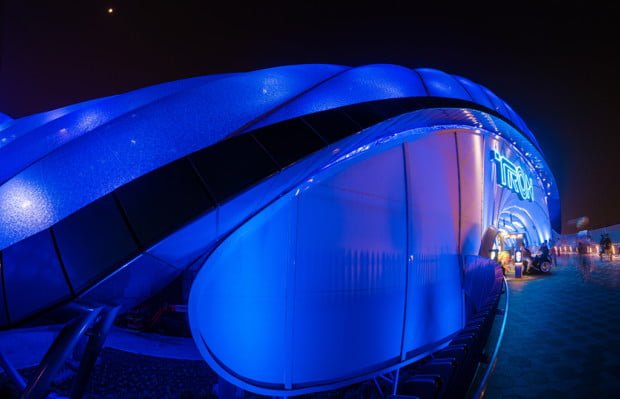 I was pleased to be (mostly) wrong. There are numerous nods to Tron throughout, and it has enough visual effects to create the impression that you’re racing around the Grid. Going outside during the day takes away from that, but I’m willing to give that a pass due to the kinetic energy it brings to Tomorrowland. The ride being just a bit longer would also be nice, but all things considered, it’s a very well done attraction.

I see a lot of rumors of this attraction coming to the U.S. parks, and I assume this is all just wishful thinking on the part of fans. The way the primary ride vehicles contort guests into a forward-leaning position seems like it would be uncomfortable (or impossible) for guests that don’t fit within a specific height/weight body parameter.

I think U.S. guests are far more diverse in both regards than their Chinese counterparts. Additionally, even those who do fit that parameter might have trouble getting up if they have knee problems, arthritis, etc. (By day 2 in the park, my knees were sore from so much walking, and it took me a bit to hoist myself out of the seat.) 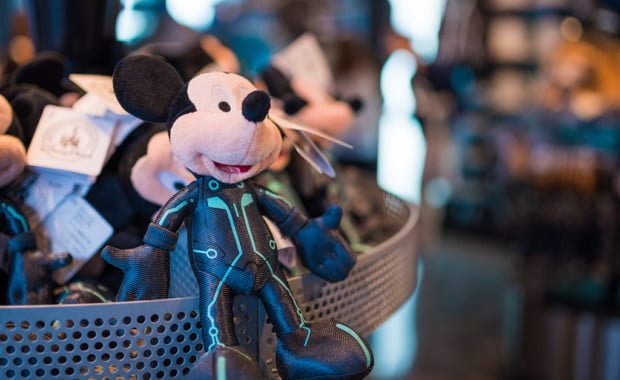 In the merchandise department, TRON Lightcycle Power Run rivals Roaring Rapids for the most merchandise devoted to a single attraction. There’s a ton in the gift shop, including some unique designs that push the envelope. I think I “christened” the shop on the blogging front by posing Mickey for the above photo, much to the bemusement of a nearby Cast Member.

I’m well aware that I take a lot of bizarre photos for this blog, but I feel like Cast Members (and to a lesser degree, other guests) are mostly cognizant of the why behind what weirdos like me do in the U.S. parks. In China, not only do you have the theme park as a new concept, but on opening day you have an influx of Americans documenting things that no sane person would document. That has to be a lot, all at once, for these new Cast Members. 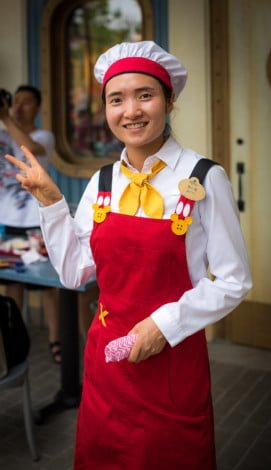 Although our FastPasses for Buzz Lightyear Planet Rescue had expired, the ride had a 5-minute wait, so we decided to do it while in the neighborhood. As sophisticated, intelligent, and attractive readers of this blog, you no doubt agree that the various Buzz Lightyear ‘blaster’ attractions are better than the Toy Story Mania games. This is primarily because they combine elements of traditional, dimensional dark rides with interactive games, rather than being Wii games you move through.

Buzz Lightyear Planet Rescue seems like a good mix of the two. I write seems like there because I’m not entirely sure. In Part 1 and in prior trip reports, I’ve made a big point of how I don’t take photos during my first ride through of an attraction so that I can savor the experience. Well, I should follow the same rule when it comes to ‘blasting, as I tend to ‘get in the zone’ when I blast (regular readers of the blog also know I’m obsessed with ‘blastin’, as demonstrated by my longstanding rivalry with Guy “Zurg’s Minion” Selga). Instead, I was so fixated on beating Mark that I didn’t fully soak up the experience.

I do know that the targeting and shooting system of the new attraction is a considerable improvement over every other version of the ride. One thing that seemed to be the case is that Planet Rescue didn’t have quite the same cartoonish feel nor did it have as many dimensional figures. I’d still say the attraction experience was an improvement, and one that integrated traditional sets with projections and screen-based elements for another solid iteration on traditional (with one everywhere else, I guess Buzz has become that) attractions found elsewhere. 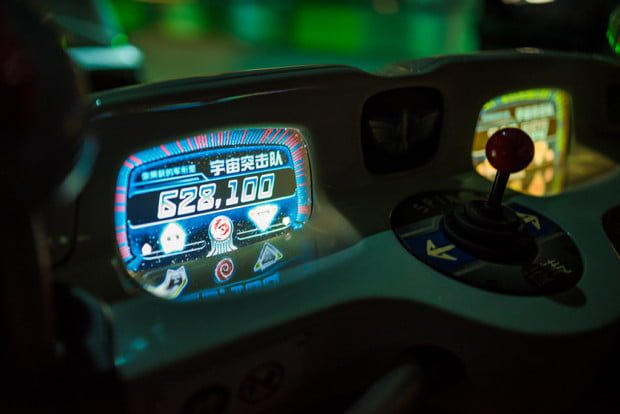 Oh, and guess what? I still lost. I bring great shame upon my legion of blasters. (I know what you’re thinking: “but Mark had unfair beginner’s luck!!1!!” Well, let’s not diminish his victory just because his blaster game is normally vastly inferior to mine. Just give him his moment.)

On the plus side, Sarah beat Molly in a match-up reminiscent of Rocky IV, representing America in a similar triumph over communism. (Sorry Molly–you’ve lived there for 6 months: you now are the face of communism.) If you want to stretch a tortured analogy even further, you could also say that, like Rocky avenges Apollo Creed in that film, Sarah avenged my defeat at the hands of communism. How? Because…

PLOT TWIST: Much like the real Steve Rogers, this Captain America is also a secret agent of Hydra…and he has infiltrated Shanghai Disneyland! What are his nefarious intentions…?!

We’ll pick up with this stunning revelation on Page 2.

(And that is how you sell comic books blog posts!)