Earl of Sandwich is a sandwich shop in Disney Springs at Walt Disney World as well as in Disneyland and Disneyland Paris. There are also a few other locations, mostly at airports, around the United States. The restaurant has developed a cult following among Disney fans, particularly for its inventive “Holiday Turkey Sandwich,” which is
Read More 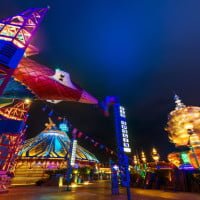 Lucky Nugget Saloon is a counter service restaurant at Disneyland Paris in Thunder Mesa serving burgers, fish, and ribs in an environment reminiscent of the Golden Horseshoe at Disneyland and Diamond Horseshoe at Walt Disney World, with the Paris version being the most elaborate and lavish of the bunch. I’m a huge fan of Thunder
Read More