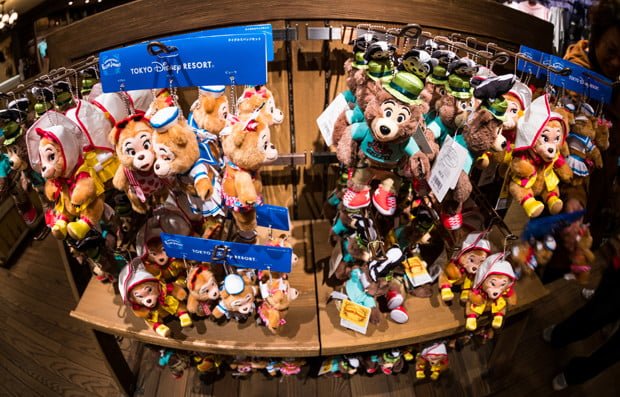 Depending upon who you ask, Tokyo Disneyland either has the best or worst merchandise of any Disney destination in the world. In this post, I’ll share some photos of merchandise from the Japan parks so you can form your own opinion, and offer some of my commentary.

There’s very little middle ground in attitudes towards Tokyo Disneyland merch, which is a result of Tokyo Disney Resort having, essentially, only one type of merchandise. There are a lot of character-driven designs, many of which toe the line between whimsical and loud.

While subtlety is not something the Tokyo Disneyland merchandising team does well in crafting its designs, they are some really clever items. Even if the stuff is “not for you” I think it’s tough to deny the artistic quality of these items. Therein lies part of the criticism: merchandise that’s really cool to appreciate at a distance, but that (for many people) is too over-the-top for everyday wear…

Before we get to the analysis of this merchandise, let’s provide some context by taking a look at some items that are currently available at Tokyo Disneyland as of December 2017: 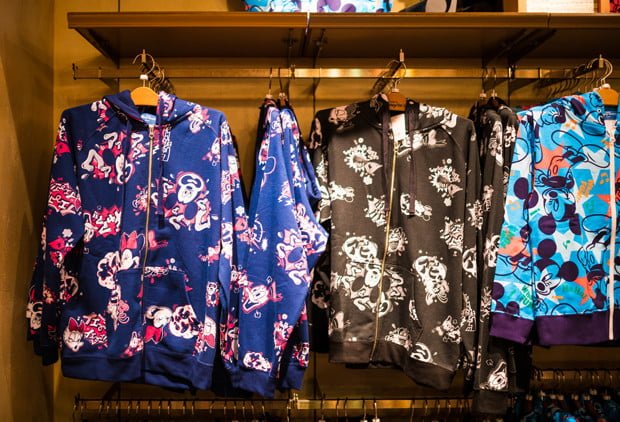 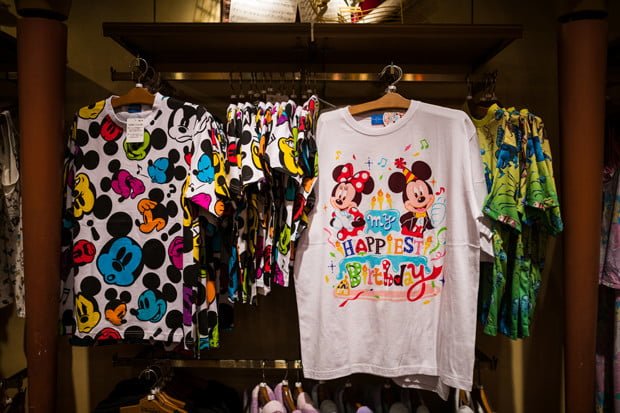 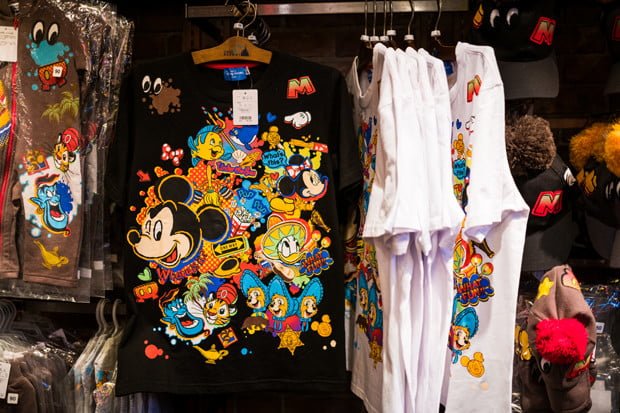 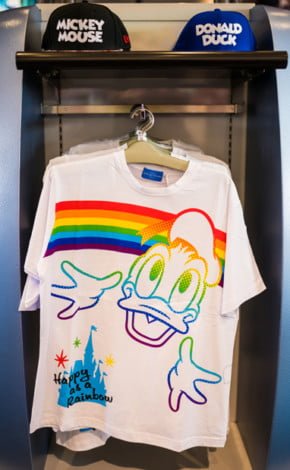 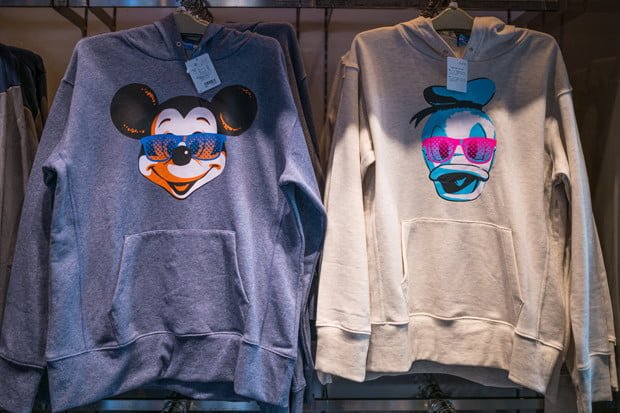 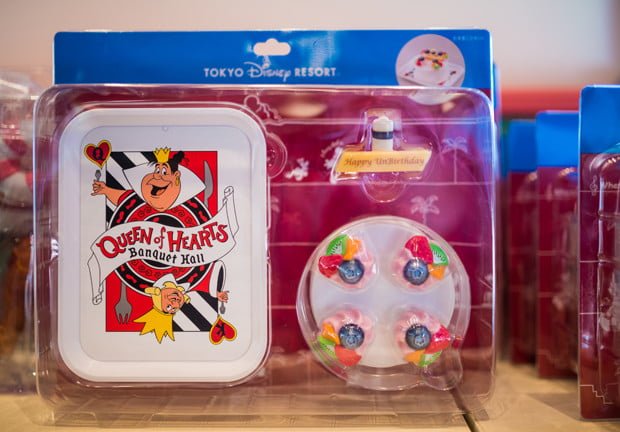 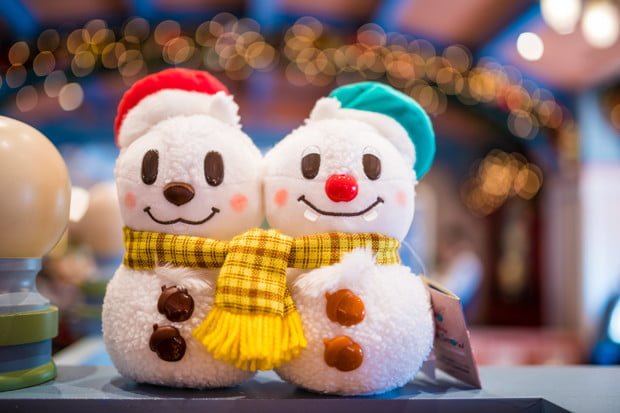 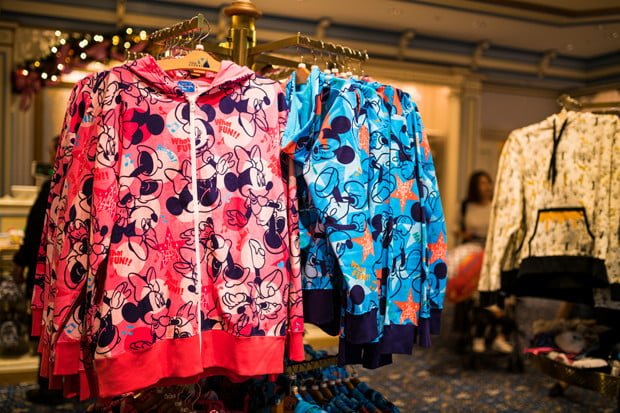 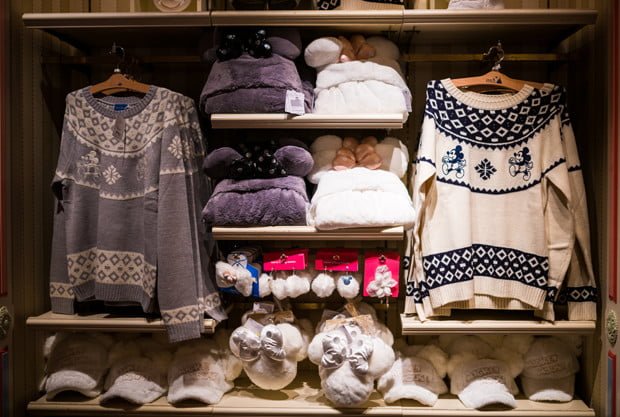 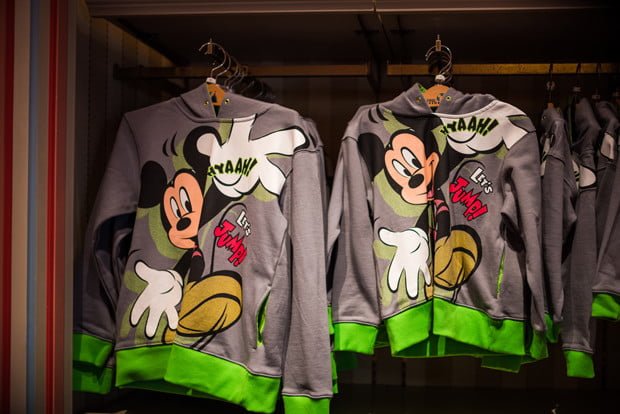 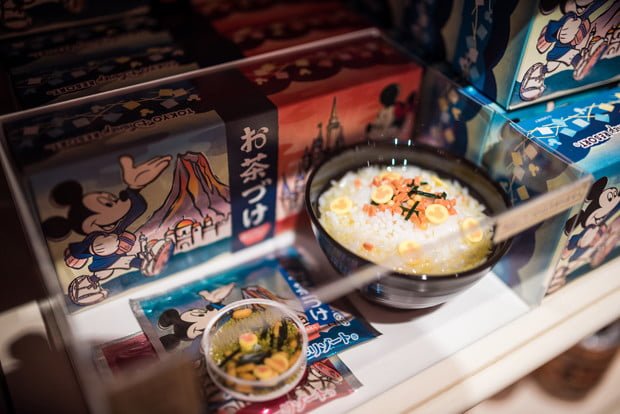 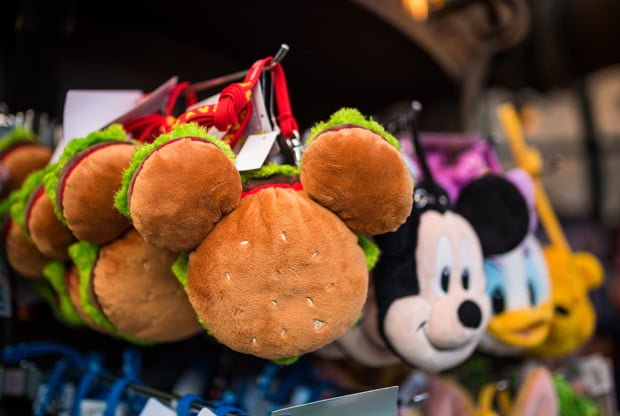 I think this is a pretty fair cross-section of both the good and bad, at least in my subjective assessment. It’s minus Duffy and friends, since that’s another beast entirely (really, this article is about clothing–Tokyo’s non-clothing merchandise is fairly good and reasonably diverse).

I’ll admit that I’m not a fan of the bulk of attire sold at Tokyo Disneyland. Like I said at the outset, I admire the artistic value of some of the items, but so much of this is way too loud for me to consider wearing. (And I think I wear some fairly vibrant things.)

However, I do have eyes. With those, I have seen the attire of other guests and people in Japan, as well as myriad stores selling clothing that’s virtually indistinguishable from retailers in the United States.

When I’m at a train station in Japan, it’s a veritable sea of muted colors, simplified styles, and conservative designs. The types of kawaii and Harajuku fashions that people commonly associate with Japan are not popular in the mainstream (heck, they’re dying even in Harajuku!).

As that article astutely points out, Japanese style is basically UNIQLO. When I look at a store like UNIQLO, I don’t see anything all that different from American retailers. There is absolutely nothing distinctly Japanese about UNIQLO (aside from perhaps the graphic tees). It’s basically Japan’s Abercrombie (minus all branding) and J.Crew hybrid, at Old Navy prices. UNIQLO has absolutely nothing in common with the merchandise at Tokyo Disney Resort, although UNIQLO does have its own very popular line of Disney merchandise. 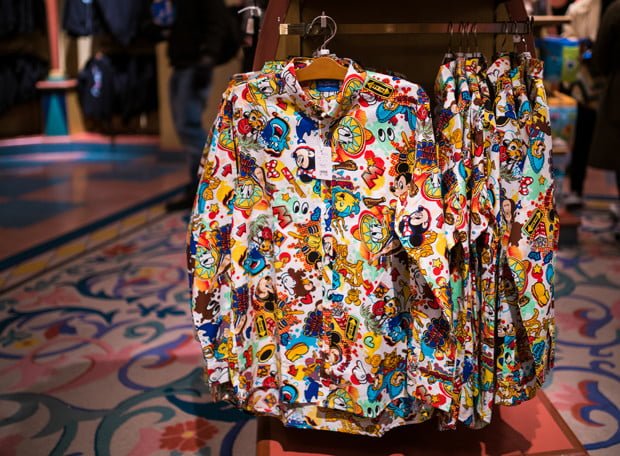 In fairness, when wandering around the streets of Japan and strolling through the parks, I notice a huge chasm in attire. I don’t think there’s an ‘average’ Tokyo Disneyland guest, but the ones who are purchasing merchandise are often decked out. These styles have more in common with what you’d associate with Harajuku than anywhere else in Tokyo.

It has been suggested that the rise of ‘extreme’ fashion in Japan has been a reaction to traditional forms of dress and behavior, and attempts–by young people in particular–at individuality. While I hardly have the cultural experience in Japan to corroborate this, it certainly seems plausible to me. While wholly different in intent, I’d say you’ll see more loud fashion statements at Tokyo Disney Resort than even in Harajuku these days.

It also makes sense in describing the appeal of the merchandise at Tokyo Disneyland. I doubt it’s totally about expressing individuality, since it’s mass market goods featuring characters from one of the largest corporations in the world. Perhaps ‘attire escapism’ is a better term? Younger people accustomed to school uniforms or a stringent dress code at the office Monday through Friday are eager to embrace something different, something fun on Saturday and Sunday when they visit the parks. With locals primarily treating the parks as a weekend escape, I think this is highly plausible.

My difficulty with this is that this audience of younger people is far from the only type of guest visiting Tokyo Disneyland. While this demo is undoubtedly the park’s “whales,” it’s also worth noting that these styles miss the mark with older and more conservative-dressing guests. Just as Harajuku fashion is a niche, I have little doubt that the loud merchandise sold at Tokyo Disney Resort has niche appeal. It might be a niche with a lot of disposable income, but it’s a niche, nonetheless.

As someone with the mentality of a crotchety old person, I can tell you that–across cultures–older people are not looking for the designs that Tokyo Disneyland is selling. It’s not just old people, either. There are a variety of guests visiting Tokyo Disneyland who are being ignored via merchandise because it’s easier to target a smaller subset of big spenders. I think this is a mistake. 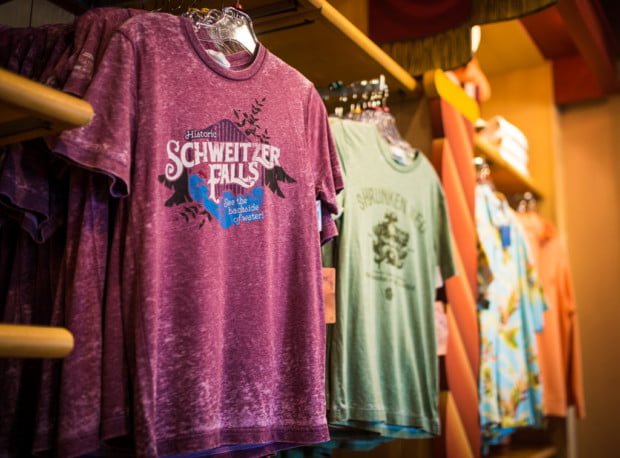 As for why it’s a mistake, an interesting ‘case study’ is Walt Disney World. A little over a decade ago, almost all merchandise was fairly gaudy. A lot of bright, not-so-subtle designs that featured characters and the words Walt Disney World quite prominently. Much of this merchandise displayed the year, and an inexplicable amount was tie-dyed. It was something like Japan’s merchandise, except without the redeeming artistic value.

At that time, only a few attractions had their own lines of merchandise, and much of that wasn’t very good. The tide started turning around the 40th Anniversary of Walt Disney World, and has been improving ever since. More of an effort has been made at creating a mix of designs, from understated ones that include sly in-jokes (and many not even conspicuously “Disney”) to even more over-the-top ones.

In my estimation, Walt Disney World’s merchandise is now better than it has been at any point since I’ve been visiting (and is, frankly, the best Disney resort in the world for merchandise now), and this is due entirely to a diversity of designs, and a willingness to take risks on things with niche appeal. At least on the merchandise front, Walt Disney World has started to recognize its varied guest demographics, and there’s pretty much something for everyone. 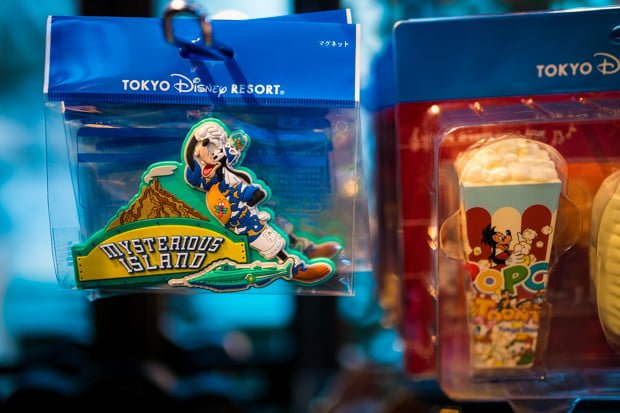 Tokyo Disneyland still seems to be going almost exclusively for its low-hanging fruit (although some recent bright spots, such as the line of magnets pictured above, offer room for optimism). Just like Walt Disney World used to cater fairly exclusively to one-time tourists wanting something bright to commemorate their trip, Tokyo Disneyland goes after its passionate local fanbase looking for a weekend escape.

As with Walt Disney World, this is far from Tokyo’s only demographic–it’s just the biggest and safest one to go after. (Then again, perhaps Tokyo Disney Resort has tried appealing to other demographics, and they just aren’t interested in merchandise, no matter the designs? I do find this hard to believe given the popularity of UNIQLO’s more conservative and mainstream Disney attire.) I don’t doubt that Walt Disney World’s most lucrative demo is still those bright designs featuring the fab five with the year emblazoned on them, but the fact that they’re continuing to increase their range over merchandise 5+ years after betting big on a variety of styles suggests to me that they’ve found success with the approach.

In the end, I can appreciate what Tokyo Disneyland does in terms of merchandise. It pushes the envelope and features a level of creativity that is missing in a lot of the designs you’ll find at other Disney parks around the world. I do think there’s room for improvement, and I’m probably (selfishly) a little bitter, as so little of this admittedly clever design-work is something I’d ever wear. Here’s hoping Tokyo Disneyland’s teams have the same realization as their counterparts in Florida, and we start to see things catering towards a wider range of guests.

Do you agree or disagree with my take on merchandise at Tokyo Disneyland? Are you a fan of Tokyo Disneyland’s styles, or are they not to your tastes? Any questions? Hearing feedback about your experiences is both interesting to us and helpful to other readers, so please share your thoughts below in the comments!