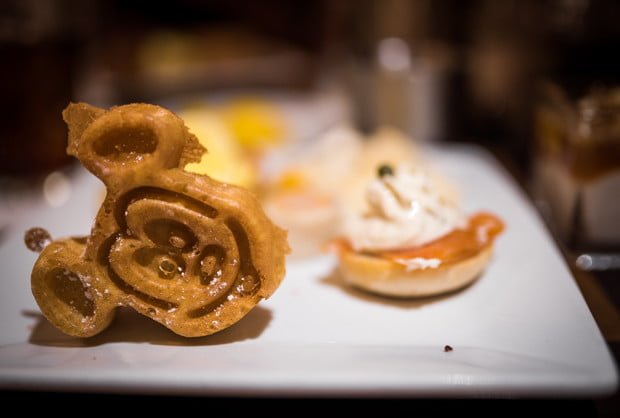 The Wave is a restaurant in Disney’s Contemporary Resort at Walt Disney World. This review features the breakfast buffet at The Wave…of American Flavors, which we view as a moderately-priced option for which Advance Dining Reservations are typically not required. While The Wave accepts the Disney Dining Plan for breakfast, we do not recommend using DDP table service credits on this meal due to its (relatively) inexpensive price. Various other discounts are also accepted at The Wave.

We’ve dined at The Wave several times since it opened, and it seems like the experience has had its ups and downs over the years. We were big fans of the location when it first opened (which was almost a decade ago, at this point), as it seemed like the kitchen had greater discretion over the menu than other mid-range restaurants at Walt Disney World, and they were doing a lot of inventive things with dishes, and sourcing quality ingredients.

Until doing this breakfast buffet, we had not dined there in a few years, as we felt The Wave menu had been somewhat dumbed-down following its opening. It was still good, but not the ‘hidden gem’ we raved about in our original The Wave Review. (Although in pursuing the dinner menu now, it looks pretty good…but that’s not the point of this review.)

In any case, on this particular morning we had some time to kill before checking into the Polynesian after a redeye flight into Orlando, so we opted for The Wave breakfast buffet… 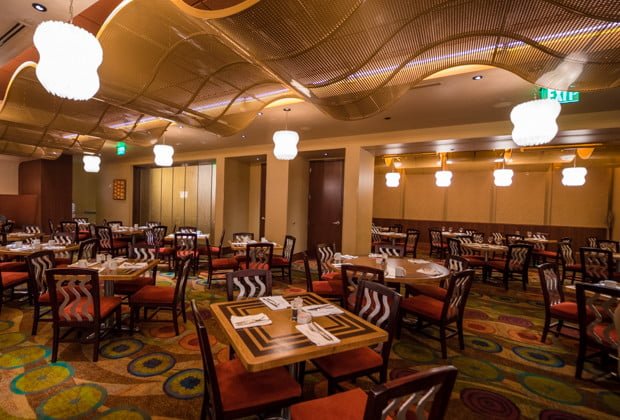 As far as decor goes, The Wave has a blandly contemporary look to it. There’s a certainly trendiness thanks to the fluid lines and blue lighting in places, but all in all, the location leaves a lot to be desired.

It’s not that the interior isn’t nice–it’s fine–it’s that this is indistinguishable from any regular chain-branded business hotel restaurant. Probably sufficient if you’re a local, but a letdown if you’re on vacation and want to enjoy the best of Walt Disney World’s themed environments. 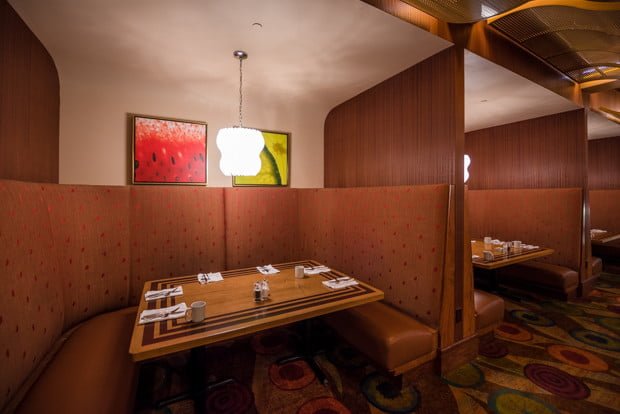 Chef Mickey’s is the only one of these 3 breakfasts with characters, though, and you’re paying a significant premium for that. 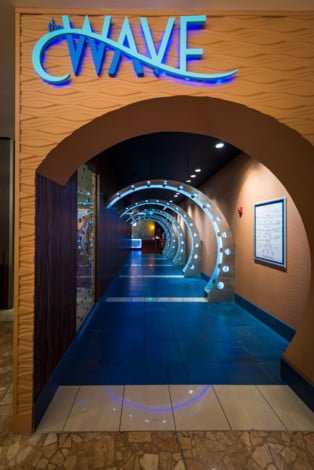 For breakfast, in addition to the buffet, there’s an a la carte menu with modestly priced items. At first, we debated ordering from this (I really wanted to try the Florida Rock Shrimp Omelet, but it cost almost as much as the buffet), but after noticing some overlap (some of the a la carte items were on the buffet) and wanting to potentially skip lunch, we figured The Wave breakfast buffet was the more cost-effective option. 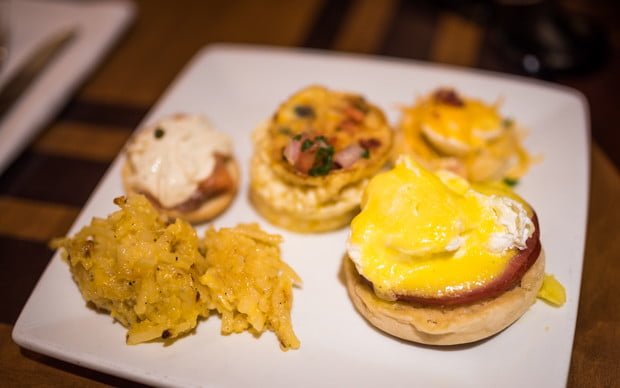 The Eggs Benedict with Key Lime Hollandaise were, in my estimation, the standout item on the buffet. After giving this a second chance (more on that below), I found this dish excellently prepared, and the subtle lime flavor made it unique. I ended up having 3 of these over the course of the meal.

The Cheddar Grits were also exceptional, and that’s not a word I’d normally use to describe grits of any sort. They had a rich, creaminess that positioned them as tasting like a glorious hybrid of mashed potatoes and mac & cheese (they aren’t, obviously, but that’s the best I can describe them). 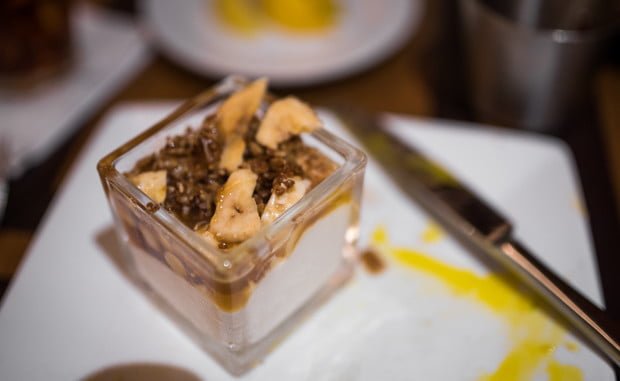 Likewise, other items on the buffet that I thought were standouts included the Sweet Potato Pancakes, Tillamook Cheddar Cheese Grits with Nueske’s Smoked Bacon (this meal is basically a “salute to all breakfast foods, but mostly grits”), all of the parfaits, and Smoked Salmon Canape (another item I had 3-4 of). 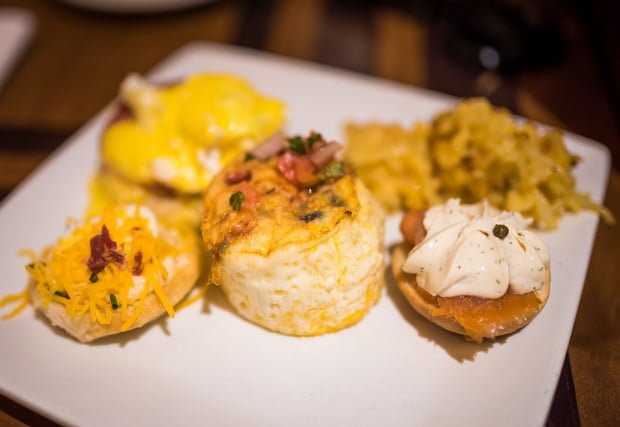 I was not a fan of the Roasted Vegetable Egg White Frittata or the Mickey Waffles. The former I found to be a bit bland and the latter tasted past their prime.

(Disclosure: I think Mickey waffles are generally overrated; take away the shape and no one is going to talk about these, aside from those who enjoy the taste of cardboard.) 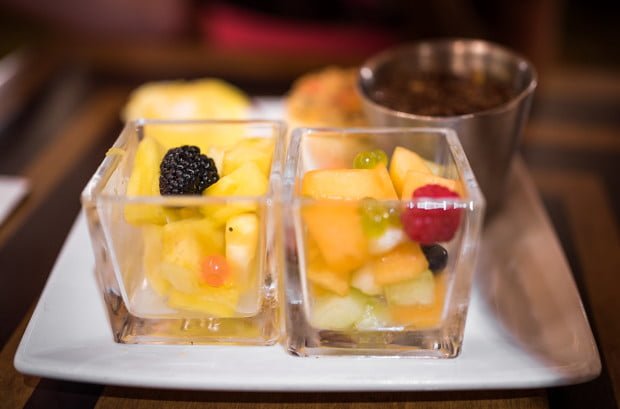 There were also a lot of items on The Wave’s breakfast buffet I skipped over entirely: all of the fruit (“officer, I swear that fruit pictured above is not mine. I was holding it for a friend!”), pastries, breakfast cereal, etc.

Basically, if it’s something I could get at a Holiday Inn’s “free” continental breakfast, I’m not interested. I want to fill up on the unique items, not pointless filler. (If you’re serious about buffets, I don’t need to lecture you on stomach-space allocation.) 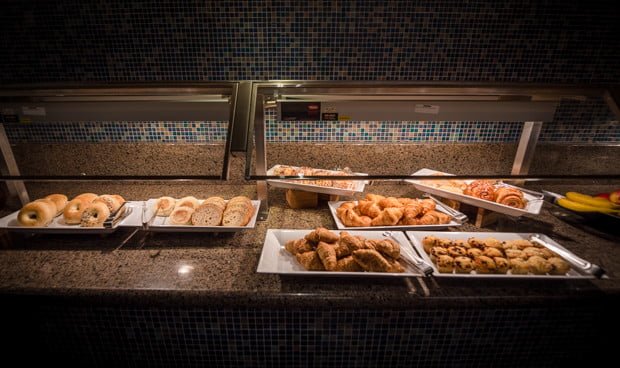 As with each of our prior experiences at dining at The Wave, the restaurant was virtually empty. It was maybe 15% full at the start of our meal, and by the end, there were only a few parties. Perhaps it’s no wonder that the ambitious nature of the restaurant has been reeled back a bit?

I think the emptiness of the restaurant is important to mention here. Not because it’s nice to have a meal in a relaxed environment away from other people, but because a buffet somewhat depends upon a sufficient number of guests consuming each item on the buffet in order for new, fresh replacements to be placed on the buffet. Without this, food can linger under the heat lamp. 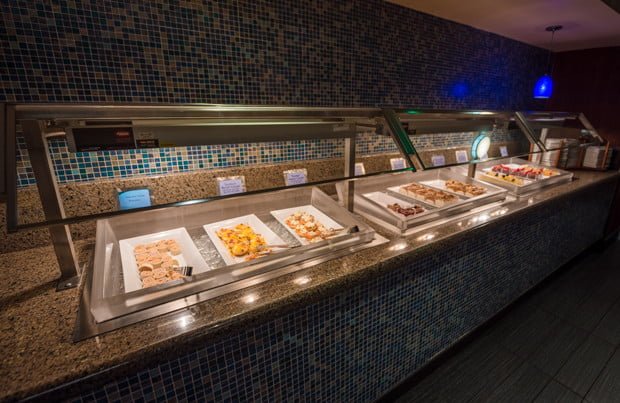 This was our experience our first round we went up to the buffet, and both of us were unimpressed. It was easy to tell a few of the things had been sitting out for a while. We had plenty of time to kill waiting for our room, so we started being a bit more deliberate in our selections. We waited until new trays of particular items had been brought out, and then focused on those. (Fortunately, the kitchen seemed to switch out trays before they were empty in many cases.) The difference between the first round and subsequent ones was night and day.

As such, and bucking the advice of virtually every other article on this blog, we would recommend choosing times to go to The Wave when it’s busy. Free Dining is going to be ideal (even though we don’t recommend using Disney Dining Plan credits on the buffet). Other good times will be the pre-rope drop rush, weekends, the Christmas season, or when the Contemporary is hosting a convention. You probably want to avoid 10 a.m. on a weekday in February.

Overall, when it’s firing on all cylinders and everything is fresh, we would consider The Wave breakfast buffet one of the best breakfasts at Walt Disney World. Of options we’ve recently experienced, it’s a rung below Trail’s End and Boma, but above virtually everything else. If you’re willing to jump through the hoops, our top recommendation for this area remains Trail’s End, but getting there, eating, and getting to the park before rope drop is something of a hassle. The Wave’s breakfast buffet has a distinct advantage in being within walking distance of Magic Kingdom, making it an easy and satisfying way to start a morning. We’ll definitely be back; the next time we go, we’ll time our meal here strategically, probably on a weekend during Free Dining season when it’s most likely to be busy.