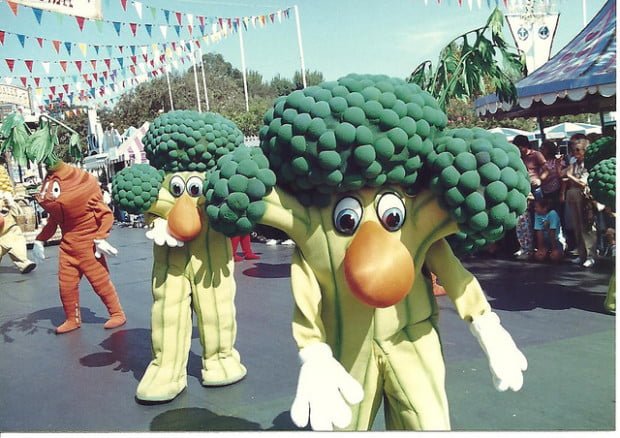 In Disneyland’s ~65-year history, there are the bizarre, funny, and sometimes downright odd things that Disney has presented in the form of attractions, parades, and entertainment throughout the years. I present this list not to mock Disneyland’s past, but to celebrate it.

I think things like those here are fascinating for a few reasons. First, some entries show raw ambition; interesting ideas that tried to push the envelope, but ultimately missed the mark. Second, some demonstrate society’s evolving standards of decency and present U.S. history through the prism of Disneyland. Times change, and so to do guest and societal expectations about what’s safe, appropriate, etc.

Finally, and perhaps most interesting to me, some things from the past demonstrate just how much Disney has changed as a business. Many of the items on this list date back to an era when Disneyland was the only theme park, and its namesake company was less-complex and bureaucratic. Things that today would probably suffer death by committee could more easily come to fruition in a leaner organization.

To me, this is both good and bad. The Disney of today is certainly more polished and sophisticated, which is great for projects on the scale of Star Wars Land. On the other hand, I appreciate this type of quirkiness that is less common today. It gave Disneyland a unique personality, allowing it to straddle the dual role of upstart regional park and prolific theme park operation. (This is something you see today in start-ups that are large-scale, but still project a ‘voice’ and character.)

Please click on the links throughout the post for more info and photos on each of these interesting topics. Thanks to D23, the Walt Disney Family Museum Blog, Disneyland Nickel Tour (all photos here are © Disney, and usually sourced from postcards in Nickel Tour or via D23), and the wonderful historical fan blogs that painstakingly chronicle all things Disneyland…

Disneyland State Fair Parade – If you’re anything like me (and hopefully for your sake, you aren’t), you lament the dearth of live farm animals, cartoon broccoli characters, and tractors in modern Disney parades. This parade ran in 1987-88 and was sponsored by John Deere, celebrating its 150th Anniversary. The parade does not appear to be good by any means, but I’ll give them an A for effort anyway, as it looks like a fun idea.

In addition to the parade, there was a Ferris Wheel set up in front of Sleeping Beauty Castle (imagine the outrage from fans today), plus carnival games in the Hub and Town Square. Oh, and a glorious little thing called “Pigmania” at Big Thunder Ranch. There, live pigs raced and guests could cheer on their favorites. A little over a decade later, Disney (presumably?) drew inspiration from this special event and opened Disney’s California Adventure across the Esplanade, a veritable year-round state fair. It had nothing as exciting as pig races. 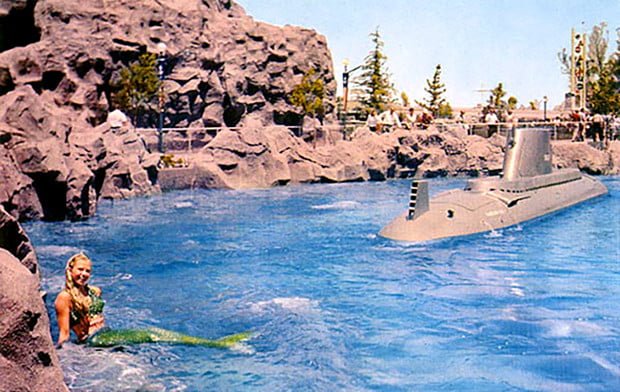 Mermaids in Tomorrowland – This is one of the more well-known oddities, having been covered recently in mainstream publications; these mermaids appeared on rocks and underwater in the Disneyland Submarine Lagoon, starting with the grand re-opening of Tomorrowland in 1959. During that re-dedication, a water ballet with live mermaids (err…humans with tails attached) performed. The mermaids returned during the Tencennial celebration, and continued appearing during summers for 2 years through 1967. Stories abound of men jumping into the water to reach the mermaids on the rocks, and the chlorine in the water dying the mermaids’ hair green.

I think a big reason these mermaids have proven so popular decades later despite being short-lived is that they capture it all: an idea that made its way into Disneyland in a ‘different era’ thanks to less bureaucracy, legal red-tape, and different societal expectations. The concept proved to be a poor one for a host of reasons, but since no one actually got hurt, it’s become an amusing and fond memory of Disneyland’s early years. Jim Korkis on Mouseplanet has a great interview with one of the mermaids, and it’s well worth a read. 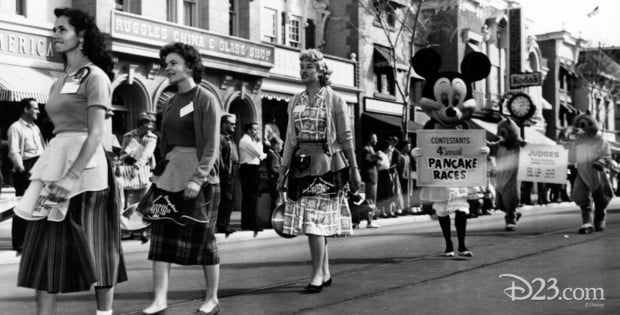 Aunt Jemima’s Pancake Races – Dating back to 1957, this was an annual event down Main Street, as women clad in skirts and aprons would run carrying a griddle and mostly-cooked pancake. Along the course, they would have to flip the pancake over a ribbon and catch it. The competitor who finished first with their pancake intact would earn a place a California’s representative in the Nationals, receive a check for $100, and have their photo taken with the actress who portrayed Aunt Jemima.

During this time, what’s now River Belle Terrace was Aunt Jemima’s Pancake House. The restaurant was sponsored by Quaker Oats, maker of Aunt Jemima pancakes and syrup. Aunt Jemima herself made appearances, before the restaurant closed in 1970 as the character became increasingly controversial. (I’m actually surprised the character–even in modified form–survives today.) If you want to learn more about the history of the location and see photos of it as Aunt Jemima’s, I highly recommend checking out Daveland’s page on Aunt Jemima’s Pancake House. It’s really fascinating. 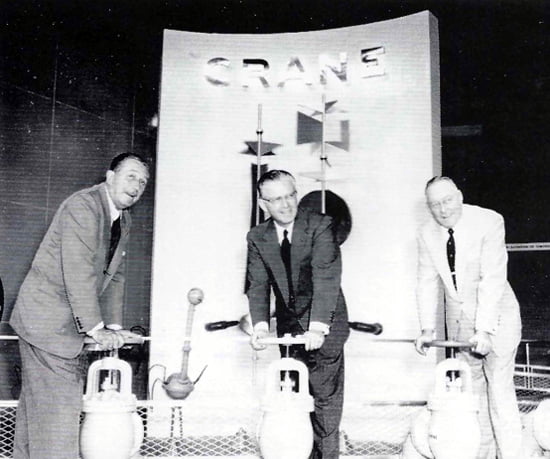 Bathroom of the Future – If this were around today, there’s no doubt it would make our Top 10 Toilets at Disneyland list. Sponsored by Crane plumbing (now part of American Standard), this exhibit showcased advancements in bathroom technology, with guests receiving a brochure highlighting all of the “exciting” Crane products used in the bathroom that they could order.

This was one of several last-minute additions made by Walt Disney made to Tomorrowland to ensure that the land wouldn’t be cut from Disneyland’s opening day plans, many of which were dry exhibits heavily supported by corporate sponsors. Opening in 1956, the Bathroom of the Future was dedicated with a “valve-turning” by Walt Disney and Crane president, Frank F. Elliot. 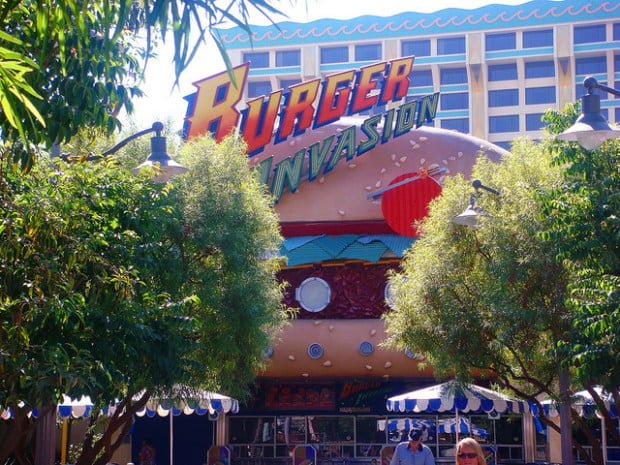 Burger Invasion – A Disney’s California Adventure 1.0 original in the truest sense, this was a restaurant in Paradise Pier that went extinct in 2010. Burger Invasion was a giant burger shaped Spaceship-restaurant that I guess you could say was on-theme because it was “California Crazy” architecture.

As we detail in our Disney’s California Adventure 1.0 Retrospective, Burger Invasion was the first McDonald’s in a Disney theme park when it opened, and was the culmination of a strong relationship between Disney and McDonald’s. As McDonald’s came under fire for its unhealthy fare, that relationship soured fairly quickly. Burger Invasion unofficially closed in 2008 when Disney’s partnership with McDonald’s ended, but the restaurant hovered around in limbo until 2010. Although it never re-opened after 2008, McDonald’s logos and menus were removed from the restaurant and replaced.

The Frito Kid – Continuing on the bizarre food sponsorship trend, we head back to Disneyland, and several decades earlier when Casa de Fritos, sponsored by Fritos. This was a pretty overt sponsorship, with a full-sized Frito Kid, which doubled as a coin-operated vending machine for bags of the corn chips.

You can see and hear audio of the Frito Kid machine in action in the video above, which was quite elaborate. Upon inserting a nickel, the Frito Kid would come to life, turn his head, lick his lips, and slowly move his eyes side to side before calling on his (invisible) buddy Klondike to deliver a bag of Fritos. Casa de Fritos quickly outgrew its original location and moved to (what is now) Rancho del Zocalo in 1957 and operated there through the 1960s. You can see more of the Frito Kid on ImagineeringDisney.com. 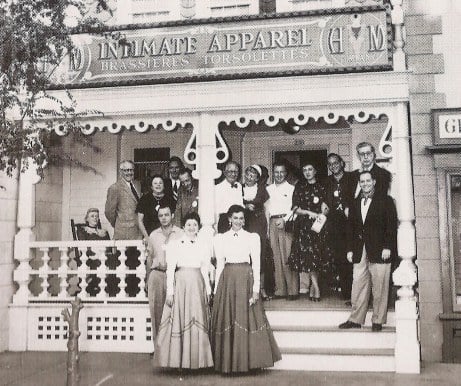 The Wizard of Bras – This one scores points on two fronts: not only was there a bra shop on Main Street, but it was one of the pioneering uses of a zany pun at Disneyland–a technique that would later be put to “great” use during the design of Disney’s California Adventure. This store, officially known as the “Intimate Apparel Shop,” opened in 1955, when America was far more modest than today.

This was one part store featuring modern-day underwear for purchase, and one part “attraction.” From Disneyland Nickel Tour: “the history of underwear was told via scenes revealed in magic mirror. ‘What a lift today’s girl gets,’ the narration concluded, ‘from Hollywood Maxwell, the Wizard of Bras.’ Unfortunately, the bra shop just didn’t hold up and went bust around December of 1956. The Ruggles China and Gift Shop expanded into the newly vacant space.”

Rocket Man – This is one I think you have to see to believe, so please watch the above video, narrated by none other than Walt Disney (in a Wonderful World of Disney episode titled “Disneyland Around the Seasons“). This shows a man propelled above Tomorrowland’s Flight Circle attraction via a jet-pack belt. Something tells me the legal department would never let this off the ground today…

From Disneyland Nickel Tour: “Here on Planet Earth, the Rocket Man was knock as William P. Suitor, who claimed to have made more than 2,000 Rocket Belt flights without a single accident. Though the Rocket Man and his Rocket Belt is a very well-remembered image of early Tomorrowland, he was, in fact, only there for those few weeks in 1965, and never returned. At least, not to Disneyland. He created his biggest sensation ever as he flew into the Los Angeles Coliseum to commemorate the opening ceremonies of the 1984 Summer Olympics. Yup, that was him!” 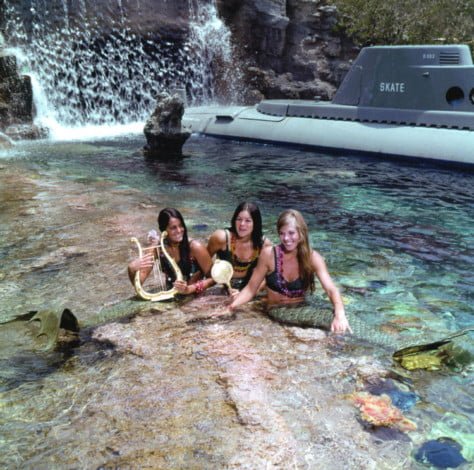 Some pretty cool stuff, right? While I can’t say the many weird things that have occurred at Disneyland over the years have all been good ideas–or even things that would be appropriate today–some of them have been pretty cool. And this just scratches the surface of the weirdness!

What are your favorite ‘weird’ memories or stories you’ve heard about Disneyland? Anything here you’d like to see return? Anything you’re glad is permanently extinct? Share any questions, tips, or additional thoughts you have in the comments!