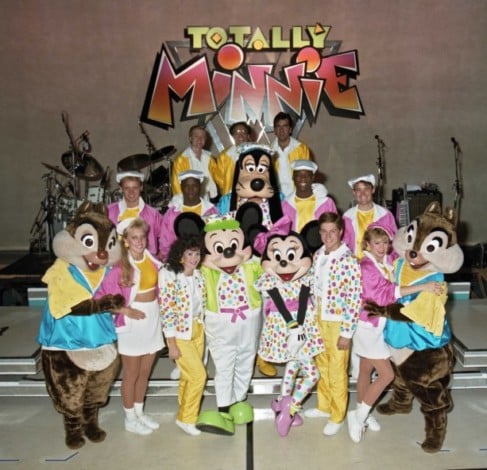 Happy Anniversary, Walt Disney World! On October 1, 1971, Magic Kingdom opened its gates to guests as the Vacation Kingdom of the World. I thought it’d be fun to reflect on some weirder moments from Magic Kingdom’s history, especially after the popularity of our Weird Disneyland: 60 Years of Zaniness post.

Much like Disneyland, there are some bizarre, funny, and sometimes downright odd things that Walt Disney World has presented in the form of attractions, parades, and entertainment throughout the years. Rather than cramming all of the parks into one post, this one will focus solely on Magic Kingdom. After all, “Barbie Birthday Party” at Epcot ’94 probably is deserving of a post all its own!

I’ll add the standard disclaimer that this list of oddities is presented to celebrate the way Magic Kingdom has changed and evolved, not to mock it. I think the items on this list (mostly short-lived entertainment) reflect the eras from which they came, and it’s fascinating to view the 1970s, 80s, and 90s through a Disney lens. Sure, a couple of these things might be cringe-worthy today, but they are a product of their time–and how many ‘flavors of the month’ today will be cringe-worthy in a few decades?

Anyway, before we dig into the list, I want to thank some of the historical resources out there that have chronicled the history of Walt Disney World. Particularly helpful for background research on this post were Archivist Nate Rasmussen’s “Disney Days of Past” series on the Disney Parks Blog, and Progress City Primer by Michael Crawford. Other sources are linked to throughout the post, and are worth a read. 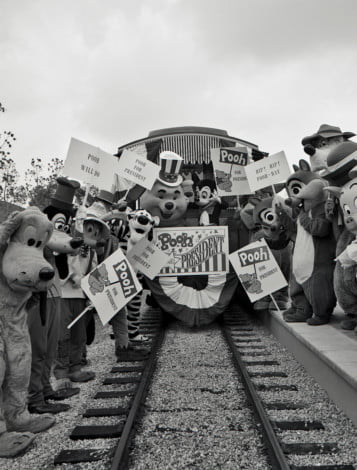 Pooh for President – Sensing weakness in McGovern and President Nixon, Pooh decided to toss his hat in the political fray, with an…uh…interesting(?) presidential campaign in 1972. This ranks as one of Disney’s more bizarre publicity efforts, mainly because of the promotional effort and level of detail that went into Pooh’s Presidential campaign.

Primarily a Disneyland event (where Pooh ran in ’68, ’72, ’76, and ’80), in 1972, Pooh’s formal nomination occurred at Walt Disney World. There, Pooh received the Demo-Pooh-blican Party bid (as voted on by kids who entered a promo at Sears), and was announced at the forecourt of Cinderella Castle. Tigger served as his press secretary, and via press releases, several policy positions (that mirrored real-life politics) were released. His platform included disclosing the “Bear Facts,” a promise to put “hunny in every pot,” a “battle to ‘lick’ the high price of ice cream cones,” and other proposals aimed at earning the youth vote. Pooh again ran for President in 1976, and this time he had his own theme song, “Winnie the Pooh for President,” sold as a single at Sears stores.

Even though this was clearly a cute event aimed at kids, it’s interesting how Disney rounded Pooh’s bid out with details that border on satirizing modern political campaigns. There’s an absurd undertone to all of this that (to me, at least) distinguishes it from the optimism of Hall of Presidents or American Adventure, even though those two attractions are aimed at decidedly older audiences. In tone, this struck an almost Muppets-esque humor, but with the benign bear at its core, it still seems completely innocent.

America on Parade – The Pooh for President campaign was such a rousing success that 3 years later, America on Parade debuted in Magic Kingdom to celebrate the bicentennial of the United States. In several regards, there was nothing bizarre or weird about this: it was an incredibly ambitious salute to all nations but mostly only America, and there were some great designs in there. In fact, the parade was produced in co-production with Disneyland in order to distribute the costs of the elaborate production between the parks, and two copies of the parade were built–and run–simultaneously on each coast as both a daytime and nighttime parade. (It performed some 600+ times in Magic Kingdom during its 2 year run!) In addition to the parade and other in park offerings, Disney produced a television special and America on Parade book.

There were also some elements of America on Parade that, in retrospect, were pretty bizarre. Like wall carpet, something that seemed groovy in the 1970s, but later seemed weird. There was a sandwich float, television float, giant rocking chair float, and giant turkey float. That’s just naming a few! A prime example of the odd characters in this parade were the 8′ tall walking dolls known as the “People of America,” which would later serve as the inspiration for Chucky, and give rise to the whole sub-genre of “Puppet Horror.” (Actually, the idea behind them seemingly was resurrected later with the World Showcase dolls in EPCOT Center…but that’s another topic for another post!) 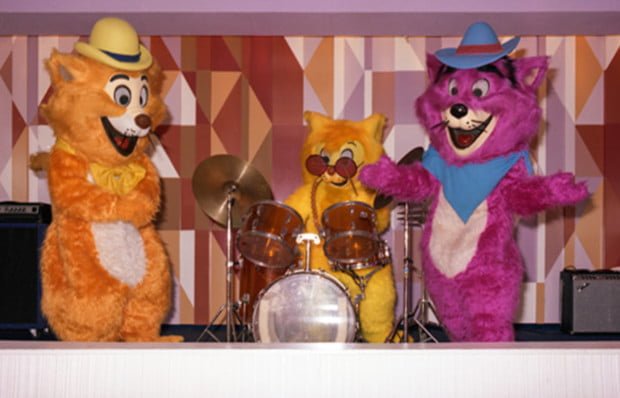 Scat Cat’s Jazz Band – Today we have Sonny Eclipse–and before him, Michael Iceberg–serenading Magic Kingdom guests with cosmic tunes on stage at Cosmic Ray’s Starlight Cafe. Before either of them, and before the restaurant was even called Cosmic Ray’s Starlight Cafe, Scat Cat’s jazz band from The Aristocats performed on the same stage at the Plaza Pavilion in Magic Kingdom in the 1970s.

What’s weird about this is that these meet & greet characters were, presumably, performing live music…or pretending to perform around real instruments. I know this is the norm with character shows in the parks, but it seems a bit odder to have characters that are supposed to be an actual band faux-performing (and in such close proximity to guests). The only photo and information about this entertainment are from the Disney Parks Blog. (There’s also this photo and this photo of the meet & greet characters roaming Fantasyland in 1972, but nothing else.) Anyone else recall seeing this trio perform? Was it as bizarre as what I’m envisioning?

Totally Minnie – Speaking of bands, “Totally Minnie” was a 25 minute, high energy song-and-dance revue during which she, rad dancers, and other characters performed “Totally Minnie,” “Minnie’s Workout,” and other songs from her newest LP at the time. Wait…Minnie had an LP?! That’s right, and this totally outrageous album is actually still available for MP3 download.

This Magic Kingdom show was performed as a tie-in with ABC’s Totally Minnie TV Special (so the album makes a bit more sense), in which a nerd visits “The Minnie Mouse Center for the Totally Unhip,” where Suzanne Somers and other stars leads him through the steps of losing his nerdiness. (You can’t make this stuff up.) While the special was far from edgy, it seems like an effort by Disney to emulate trendy performers of the era like Madonna and Whitney Houston, and make Minnie “hip.” Like so many things from the 1980s, this show now has a ‘so bad it’s good’ vibe, if you’re into enjoying things ironically. 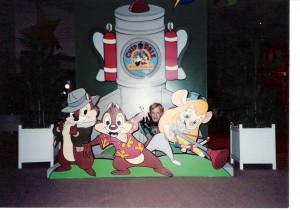 That show featured everyone’s favorite characters from the Disney Afternoon: Gummi Bears, Chip ‘n Dale Rescue Rangers, DuckTales, TaleSpin, DarkWing Duck, Goof Troop, and Bonkers. You know, all of the brilliant, critically acclaimed masterpieces of television that any child of the late 1980s and early 1990s fondly remembers. Mickey’s Birthdayland/Starland/Toontown had a lot of stuff like this throughout its history (the Afternoon Show later morphed into Mickey’s Magical TV World), and as the “temporary” land (that lasted 20 years!) in Magic Kingdom home to Mickey & friends, it was pretty easy for Disney to shoehorn this type of thing into the giant circus tents. 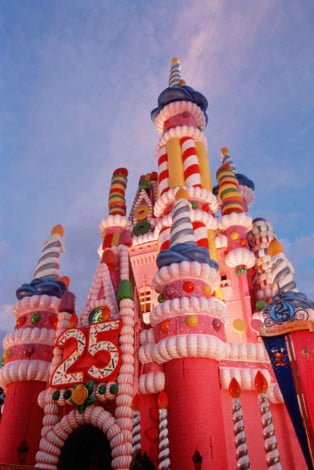 Cinderella “Castle Cake” – For the 25th Anniversary, someone had the bright idea of decking out Cinderella Castle as a giant pink birthday cake. The castle cake proved incredibly divisive, with its detractors coming up with plenty of derogatory terms for it (my favorite being the “Pepto Bismol Castle”), and many Disney brides of the nascent “Disney Fairy Tale Weddings” division (launched only one year earlier) angered that the regal castle they wanted in the backdrop of their photos had been transformed into something garish.

I’ll say something that’s almost heresy among Disney fans: I liked the Castle Cake. Mind you, I was 10 years old when I saw it, and not exactly the best judge of theme or tastefulness. (My idea of style then was knee-high socks and TMNT shirts.) Even today, I remain nostalgic for the Castle Cake as a short-lived overlay. I totally get why others find it abhorrent, but my memories of it are fond, and I’d love the chance to photograph it. 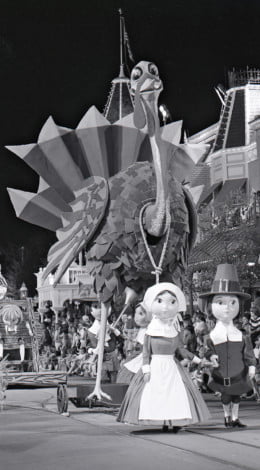 Not everything can be a home run, but these were some neat, products of the 70s/80s/90s, right? While I lived through and saw several of these, I still think it would be fun to time travel and revisit some of the more bizarre moments in Walt Disney World history. (The sign of a true Disney geek: somehow has the ability to time travel, and uses it for Disney purposes! 😉 )

We’re planning future installments of this series, including a part 2 for Magic Kingdom fairly soon, so if you have any odd suggestions, please share them in the comments!

What do you think of these ghosts of Magic Kingdom past? Any weird happenings you recall from Walt Disney World? Share any questions, tips, or additional thoughts you have in the comments!