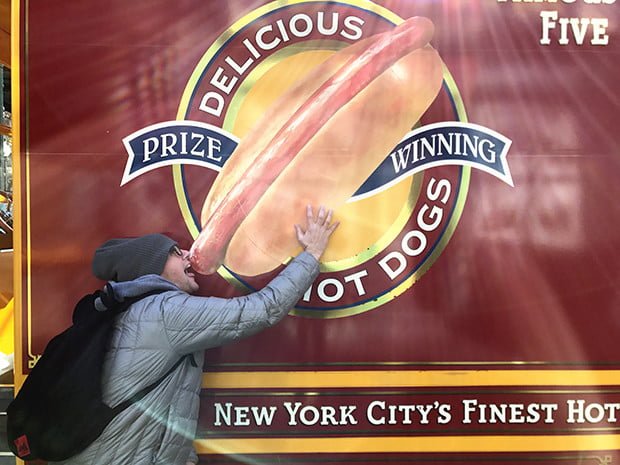 ANAHEIM, CALIF. – Local man, Guy Selga, is a huge Award Wieners enthusiast. In an attempt to understand his love for Award Wieners, I spent seven months at Disney California Adventure with Mr. Selga, going through his routine. Here’s a glimpse at one day in the life of this Award Wiener-eating legend…

It’s a brisk 63 degrees in Anaheim, California at 10:17 a.m. as we line up to “rope drop” the 11 a.m. opening of Award Wieners, a restaurant Disney bills as serving an “all-star ensemble” of “buzzworthy bites.”

Guy Selga, outfitted in his standard park-wear–a camouflage ‘Bathing Ape’ tank top and homemade capri sweatpants–pauses from mumbling under his breath and his nervous pacing to kiss a vibrant “Maliburritos” tattoo on his left bicep. His head slumps; the mumbling resumes, its tone growing more intense:

His palms are sweaty, knees weak, arms are heavy
There’s vomit on his shirt already, mom’s spaghetti
He’s nervous, but on the surface he looks calm and ready

“Am I crazy?” he asks with a maniacal laugh.

In the nearly two decades since Disney California Adventure opened, Guy Selga has dined at Award Wieners 9,056 times. By the time you read this, he will have dined there more. Barring a cardiac injury that sidelines him, Mr. Selga will achieve his dream of eclipsing 10,000 meals at the venerable establishment by the end of this year.

Mr. Selga makes his daily sojourns to Disneyland Resort from at his Long Beach-area home, leaving no later than 5:45 a.m. He wakes up at 5:17 a.m., darting out of bed in a song and dance number that would make Emma Stone and Ryan Gosling blush. It is part of his ritual, a tune by David Lee Roth. You guessed it: “Hot Dog and Shake.”

In his pocket, Mr. Selga keeps a little notebook with the words “Dog Diary” hastily scribbled on its cover. In it, he details the emotions each hot dog elicits from him, plus what he calls his “Dog Log” which recounts the date, time, toppings, and “result” of his meal (something he documents in a nearby Frank Lloyd Wright-inspired location).

He once ate the same hot dog 14 times in a single day, and for 47 consecutive days. Upon learning this fact, Disneyland officials were so horrified that they changed the Award Wieners menu, removing said dog in the process.

Mr. Selga is not the most prolific diner in the history of Disneyland Resort. Legend has it that a Staten Island man named James A. Rasulo scarfed down more than 10,000 slices at Pizza Oom Mow Mow.

When I present Mr. Selga with this information, I can tell it gnaws at him. I can see it in his eyes, which offer a window into his soul. This is what keeps Guy Selga up at night.

But Guy has a secret weapon: Pizza Oom Mow Mow isn’t open any more, and Award Wieners (inexplicably) is. He clearly knows this. When I question him regarding his plans about surpassing Mr. Rasulo, Mr. Selga leans in, whispering, “weenie n.frankfurter.” He leans back, his smile contorting. He looks menacing.

Weenie n.frankfurter. Is this a code? Is there a hidden meaning? Could it be a climate change parable? Or, are we all just pawns in Guy Selga’s game of Disney Dream Treats? Time will tell.

Obviously, the question in all of this is why?

In 2010, Mr. Selga was unhappy. He worked for a part of the federal government called the “Central Intelligence Agency,” known to some as the CIA. His life was defined by pain. The pain he inflicted upon others as part of a top secret assassination unit to find and kill Al Qaeda operatives.

So he set a goal.

On his first day of the rest of his life, Mr. Selga dined at Award Wieners seven times. In the first six months on the job, he dined there 560 times. By all accounts, he was a natural. “He’s going to revolutionize the game,” one scout said. “The hot dog world has never seen anything like him.”

Mr. Selga’s parents both used accountants from time to time for their taxes, so Mr. Selga thinks they passed on a record-keeping gene to him. He keeps track of other things in his notebooks, too. He uses 37 different drinking fountains during the course of one day we spend together. That’s a lot of drinking fountains.

Towards the end of his first year, he let one of the Cast Members — the employees at the resort — know that he was about to complete his 300th ‘dog. When finished it, he slammed down his tray on top of a trash can and howled, “HOT DOG ~300~ DOWN!” This is a tradition of sorts, and the Cast Members cheered for him upon the proclamation.

And that was the most glorious sound he had ever heard. From there, the rest is history. He fed off of their enthusiasm–and their hot dogs.

“They started becoming my friends,” Mr. Selga said. “I can see the looks on their faces when I show up. They’re happy to see me. I’m the only one who doesn’t regularly complain about my meal to Guest Services.”

On December 17, analysts are projecting that Mr. Selga will reach his goal of 10,000 hot dogs. “But I won’t stop there,” he tells me, a grin creeping across his face. “The bigger goal is to qualify for the 2028 Summer Olympics in Los Angeles.” I repeatedly tell him competitive hot dog eating is not an Olympic sport, but Mr. Selga is unpersuaded. Clearly, he has unparalleled vision. He is playing four-dimensional chess while the rest of us play tic tac toe in the sand.

I press Mr. Selga for the keys to his success throughout our day together, always to no avail. Finally, at 9:57 p.m., he offers up a nugget: “Have courage, and be kind. Oh, and never have the Uptown Chili Dog. That bad boy will put you on the DL for a good three days.”

This story has been reproduced, with alterations, from its original source.