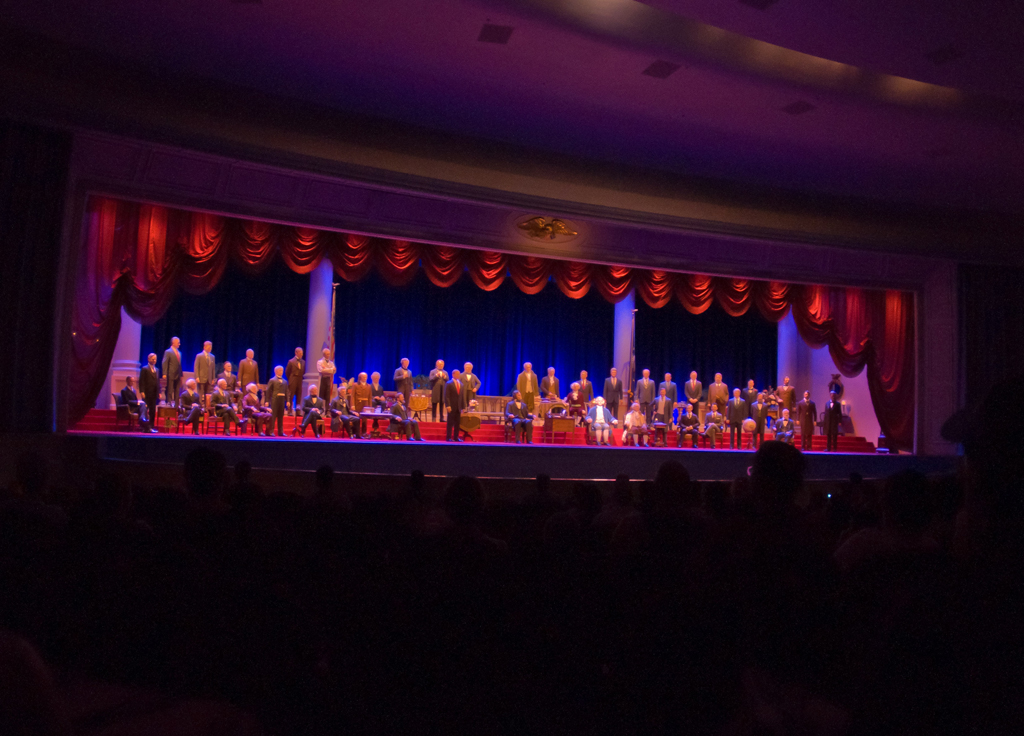 It has been a controversial year for Hall of Presidents at Walt Disney World, but a Donald Trump Audio Animatronics “robot” has now been added to the attraction, which has reopened. In this post, we’ll cover the whole saga, plus a look inside the newly-reopened Magic Kingdom attraction that features a speaking role for Trump. (Last updated December 18, 2017.)

Prior to Hall of Presidents reopening, there were persistent rumors about internal debate between Disney CEO Robert Iger, Walt Disney Imagineering, and Team Disney Orlando about giving Trump a speaking role. It’s no surprise that the last presidential election was quite contentious, and American politics are polarized and vitriolic.

There’s absolutely no love lost between liberals and conservatives, and some have gone as far as to start a petition to prevent Trump from being added to the Hall of Presidents. If that were to happen, others would no doubt boycott Walt Disney World. That’s just the reality of the situation–there was no easy, uncontroversial ‘solution’ to all of this…

At one point, Hall of Presidents was an attraction focused on the history, significance, and legacy of the American presidency. Now, like so many aspects of life in America, it’s sharply politicized. It should come as no surprise that there’s more to this story than appears to be the case at face value. Let’s offer a quick synopsis of what has happened in the Hall of Presidents saga, followed by video of the Trump speech in Hall of Presidents…

Over the summer, Vice did a long piece about difficulties Walt Disney Imagineering had been having with the new president, and internal turmoil within Disney about the changes. This article was later retracted due to anonymous sourcing. (Disney has an ownership interest in Vice Media.)

While the Vice piece was retracted, a denial of its substance was not made, and it’s a fairly plausible story. Even setting aside partisan politics, many believe giving any current president a speaking role (which was introduced with Clinton in 1993) was a mistake. This belief has been reinforced as American politics have become even more polarized, making the attraction hyper-polarized over the years, even if it was never intended to be that way when the attraction debuted in 1971.

With persistent rumors about the delays, Walt Disney World released its own statement over the summer:

Since the Magic Kingdom Park opened in 1971, The Hall of Presidents has brought together a one-of-a-kind look at the office of the President of the United States through film and the magic of Disney’s Audio-Animatronics technology. Despite some media reports to the contrary, President Trump will have a speaking role in The Hall of Presidents, like every president since 1993. We have been working closely with the current White House – just as we have with previous administrations – and the president’s recording session has been scheduled. The attraction will re-open in late 2017.

Whenever we refurbish one of our attractions, we take the opportunity to consider a broad range of enhancements. In this case, The Hall of Presidents is getting a new show, and a complete theater upgrade including a new sound system, lighting and high-definition projection system. The multi-screen viewing experience you may have seen in prior versions of the attraction is returning with an even wider vantage point of our country’s history.

That was the last official word from Walt Disney World before Hall of Presidents reopened with the Trump figure. Beyond official statements, there was a bit more to the story. Over the summer Disney CEO Bob Iger resigned from the President’s Strategic and Policy Forum, which was disbanded shortly thereafter. Subsequently, Iger made a statement that rescinding DACA is “cruel and misguided.”

Controversy within Disney persisted over how to handle Hall of Presidents, and rumors flew about what Walt Disney World would do with the attraction to minimize public outrage one way or the other. Controversy over an attraction that has always been relatively unpopular is exactly what Disney would like to avoid.

Let’s take a look at the Hall of Presidents, following its year-long transformation (via WDWNT):

You can watch the video and form your own opinions about the speech, the quality of the likeness, etc. We will note that Disney has indicated that the Trump Audio Animatronics figure “features the latest advances in technology that enable smoother and more lifelike movements.”

The Parks Blog also notes that Trump personally recorded remarks exclusively for The Hall of Presidents, just as each sitting president has done for the attraction since the early 1990s. In addition to the new speech by Donald Trump and a re-worked main show, the lobby pre-show has been expanded and new displays have been added.

Most notably, there is now an exhibit titled Walt Disney: An American Original that features Walt, and features info about Great Moments with Mr. Lincoln. This is the Disneyland attraction that debuted at the 1964-65 New York World’s Fair, and served as the springboard for Hall of Presidents at Walt Disney World.