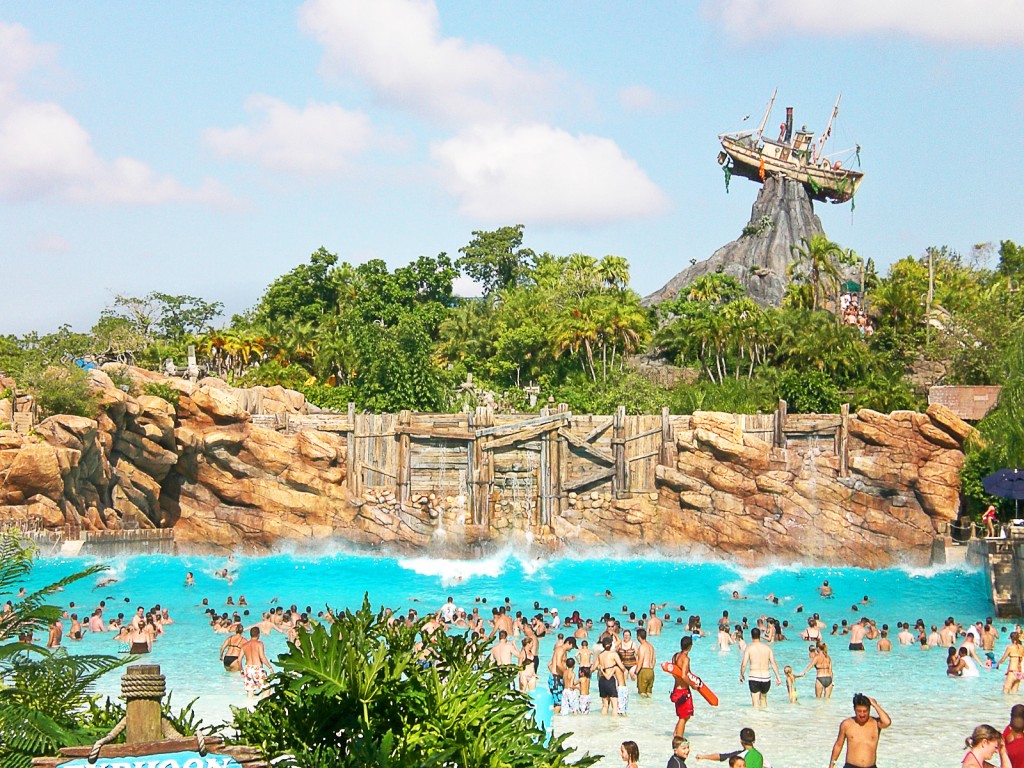 Note: these reviews have not been updated since 2011. They are no longer current and this page should only be used for basic reference. Check out our “Best Underwater Cameras for 2013” for current underwater camera recommendations to use at Typhoon Lagoon and Blizzard Beach.

How could we get good photos at Typhoon Lagoon or Blizzard Beach?

This was the question confronting Sarah and me that prompted us to start looking at underwater or waterproof camera options. First, I thought maybe a Nikon D40 Underwater Camera Housing

would be a good option. At over $1,000 for a legitimate one, this was quickly ruled out of the question. However, while looking, I found a product called the DicaPac Waterproof Digital Camera Case

for a relatively inexpensive price, so we bought one. While pretty solid for what it is, it was difficult to control underwater (if you’re merely “around” water, it’s a great option), so we got in the car, headed to our standby “internet-purchase testing zone” (aka Best Buy), and set out to find the perfect underwater camera within our budget.

The big problem with testing underwater cameras at the store is that you can’t test their key component: underwater performance. Luckily, high ISO image quality in the store translates well to underwater image quality, so our quest would not be fruitless.

Here are the cameras we tested and our thoughts on each: 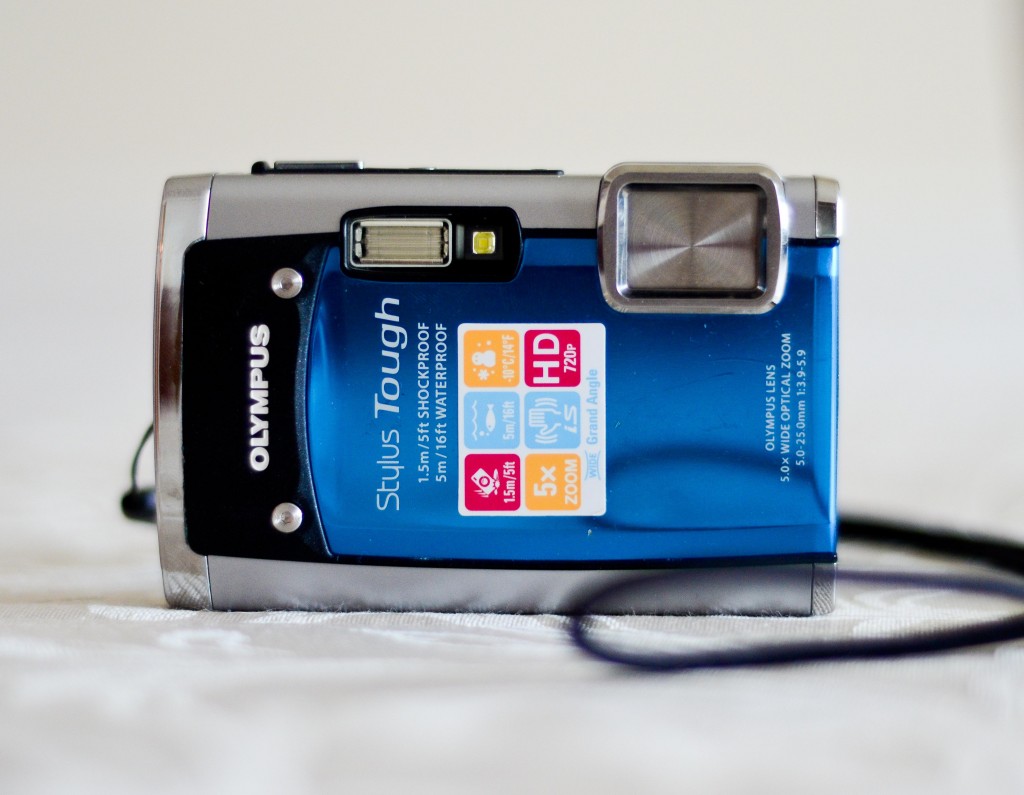 – This is the camera we ultimately purchased. Price was a big part of the equation here. It was only $175 on Amazon. It’s definitely much easier to control than the camera through the bag, but I’m not quite ready to sing its praises. However, my complaints aren’t in line with those many of those on Amazon (do people really have that difficult of a time understanding how to properly use a point and shoot digital camera?!), but are more complaints of point and shoot cameras in general: the image quality, contrast, and depth of field controls aren’t what I’ve come to expect as a DSLR user. Not really a complaint unique to this camera, and my own problem, really. The camera has some manual controls, which is nice, and great options, but the taste of underwater photography that it has given me leaves me wanting more. I fear that $1,000 casing may be in my future… 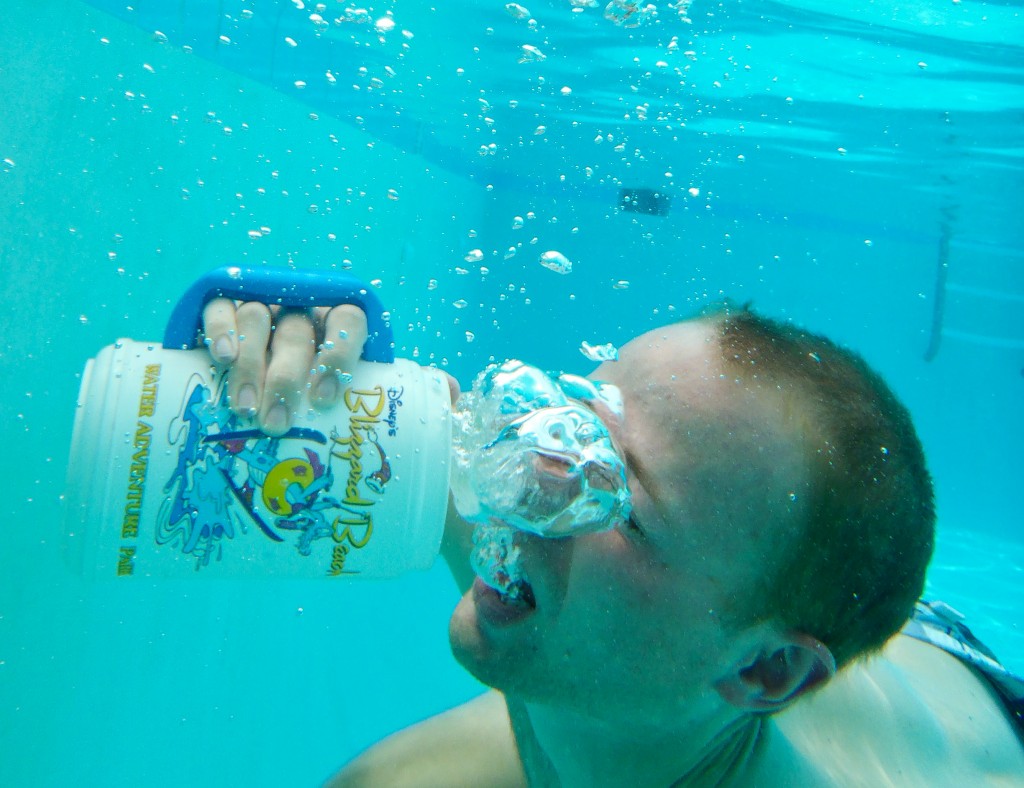 I informed the Best Buy salesperson that I’d like an underwater camera that would enable me to drink while underwater. Success!

– Admittedly, we didn’t spend much time playing with this camera, but I’m starting to wish that maybe we did. I have some perceived notions about the quality (or lack thereof) of Kodak cameras, so I pretty much dismissed this one out-of-hand. However, for less than $75, it seems like it would make a great option. It didn’t seem too bad in our tests, but I just assumed something would go wrong with it, so we didn’t get it. If you want a cheap underwater camera and don’t expect to own it for the long haul, definitely consider this.

– This was my “dream” option. I really like Canon point and shoot cameras, it performed well, there is a hack to enable RAW shooting, and it seems really well built. However, at $300, it was $125 more than our Oly, which put it out of our budget. My thinking was that I could probably find a D40 underwater housing for $700 if I looked really hard, and for “only” $400 more, I’d rather just go for that. If you want an underwater camera that will stand the test of time, I think this is probably it.

– When we did our testing, I swear this camera was like $375 or more. Now, it’s “only” $310. It was an impressive camera laden with features, but most of them seemed like things that are cool in theory but that we’d never actually end up using. Check out the Amazon spec list to see if any of them appeal to you. I thought the image quality was slightly lower than the Canon D10.

– This was one fun little camera, and I think it’s one that actually might perform a bit better underwater thanks to its multiple little lights around the lens. If I had an unlimited budget and were forced to buy an underwater point and shoot, this would probably be it. In a world where money is finite, I think it tries to justify its price with flashiness. It’s probably not worth $350, though. (Or $400 if you buy it from Best Buy!)

– This camera looks awesome, but I definitely think it’s a matter of style over substance. The test images it shot were not any better than those we shot with the Oly, which is nearly $200 cheaper. It offers plenty of features, but many of them (such as 3D photos) seem gimmicky. 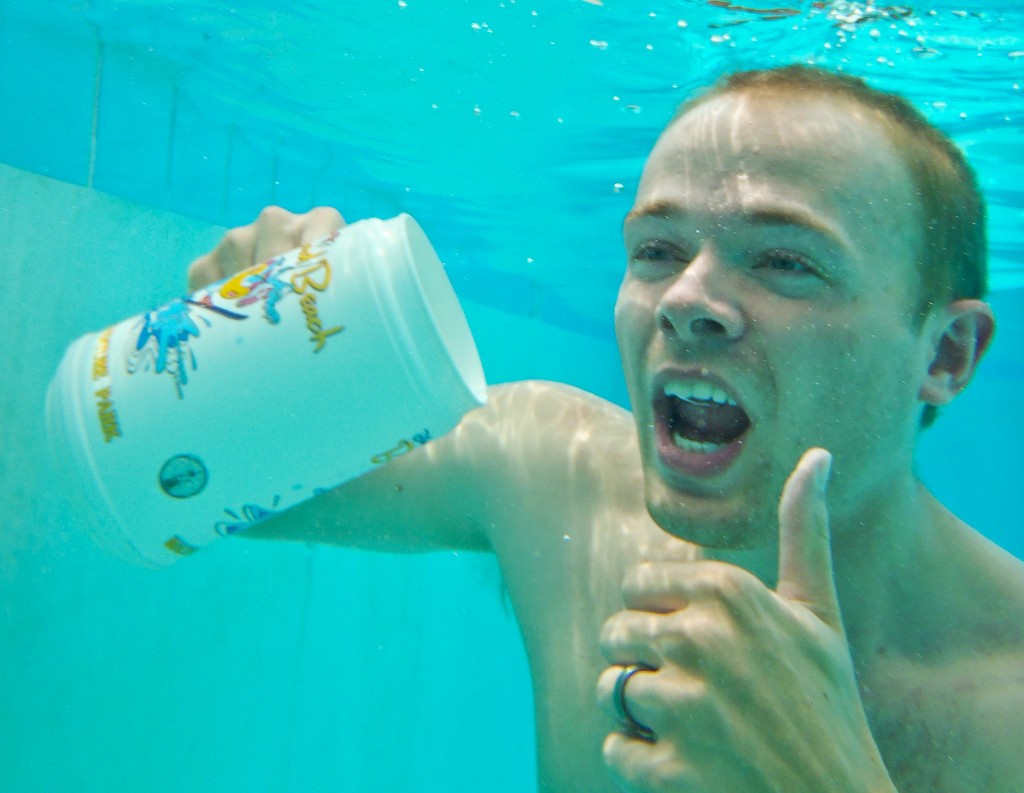 Thumbs up to underwater cameras!

Conclusion: If we could do it over again, I think we might have just purchased the Kodak EasyShare Sport C123

, or wouldn’t purchase anything and would just kept using the DicaPac Waterproof Digital Camera Case

. Our biggest rationale for buying a stand-alone underwater camera was to be able to use something that would be easier to control and produce higher quality images. Surprisingly, the images aren’t that much worse when shooting through the bag! I also wish we would have considered an older model that was cheaper in price, but we couldn’t find any to test. (Check out the second page of Amazon’s Top Underwater Cameras

for some high-quality older underwater cameras that are cheaper in price). Still, for the price we got a pretty nice little camera that will hopefully last several years!

If you have an underwater camera that you use at Blizzard Beach of Typhoon Lagoon, which one is it? Do you have any recommendations? Share your thoughts in the comments!