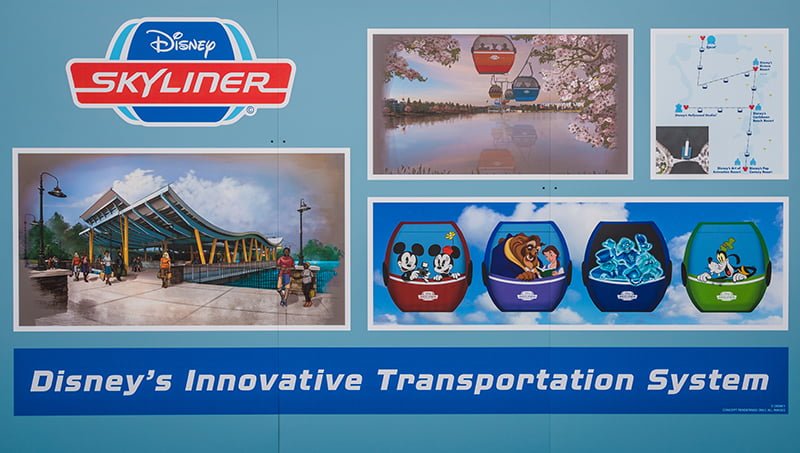 During our recent stay at Art of Animation, we took some construction photos of the Disney Skyliner gondola station that will connect AoA and Pop Century to Epcot and Hollywood Studios. In this post, we’ll offer a progress report on Walt Disney World’s upcoming gondola network.

This is a project we’re anxiously awaiting, as it’s Walt Disney World’s first new unique form of transportation in decades. We love the monorail system, enjoy taking the FriendShips around Crescent Lake, and also enjoy the boat transportation elsewhere. From our perspective, the bus system is a necessary evil, whereas other forms of transportation are attractions unto themselves. We anticipate feeling the same way about the Skyliner.

This isn’t actually an exciting update, as it focuses exclusively on the Skyliner station progress at Art of Animation/Pop Century occurring on Hourglass Lake, and there’s not much to see. At the other stations, there’s even less to see, as construction walls completely conceal the progress thus far. On the plus side, we do have the attraction poster for the International Gateway (Epcot) gondolas, too.

Let’s start with that attraction poster, which was briefly visible in the art gallery at the Epcot International Festival of the Arts: 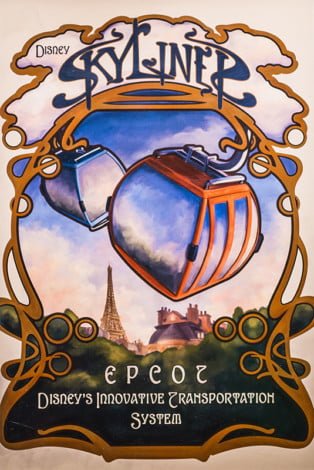 This was removed after the first day of the event, but not before like 897 Disney fan blogs posted articles about it. I’m not sure whether the poster has been returned; either way, the cat’s out of the bag.

Now let’s turn to the construction for the stations taking place between Art of Animation and Pop Century along Generation Gap bridge: 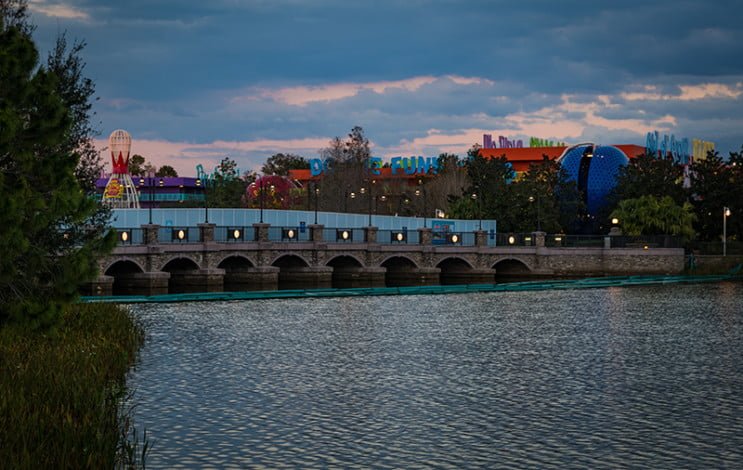 Generation Gap bridge remains open, with about half of its width engulfed by construction walls.

It’s tough to get a good photo of the walls from the bridge itself, so here’s a side view. Rest assured, you can still get over to Pop Century for a tie dyed cheesecake. (To be honest, I think it’s a bit overrated.) 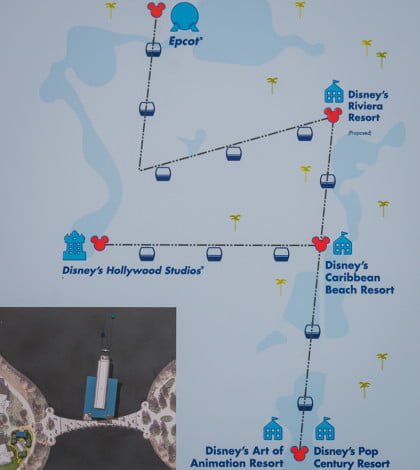 On the construction wall, you can see the above map of the Skyliner route.

In case you’re wondering or worried, the spur between Disney’s Riviera Resort and Epcot should position the route so that the gondolas are not visible from World Showcase (except potentially from France, but the new Ratatouille show building should take care of that). 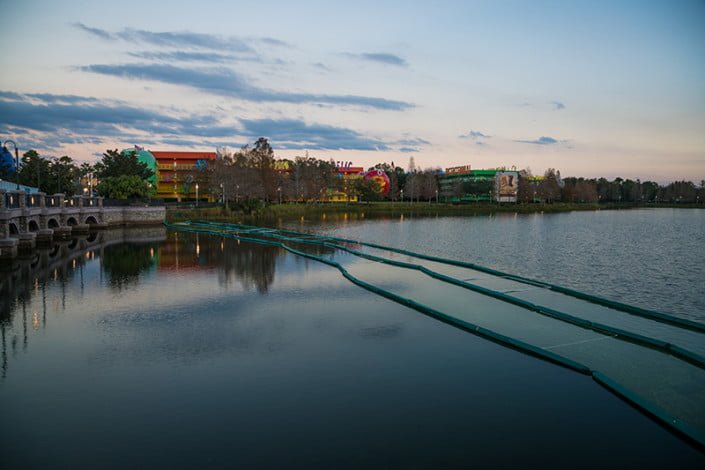 Coffer dams establish a perimeter for the project on both sides of the bridge.

Not exactly the most exciting construction update, but I’m working with what I’ve got here… 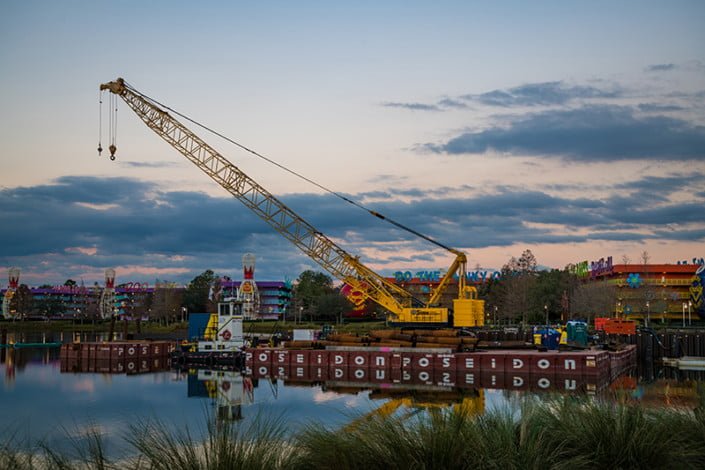 Here’s a photo from the walkway off to the side of Generation Gap bridge.

I think I commented on this in another post, but I noticed very little progress between this visit and when I checked out construction last fall when we were at Pop Century. I didn’t take photos then for the sake of comparison, but it doesn’t seem like this is progressing with any sense of urgency. 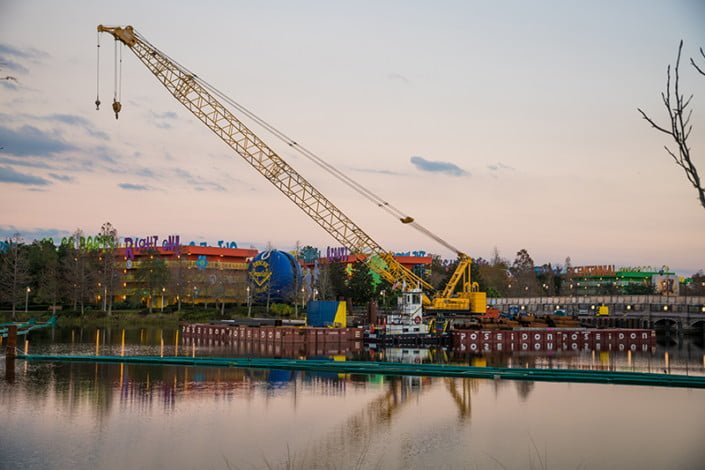 After a couple minutes taking these photos, a security guard who was nearby came over and requested that I stop taking photos of the construction. He was nice about it, so “no harm, no foul” I suppose. Out of curiosity, I wanted to ask why, but I’ve found in the past that questioning security in any way whatsoever is not a good idea. Instead, I just started heading back to our room.

Also based upon past experience, my guess is that he would’ve cited either vague security concerns or show-quality. Given that the construction is in plain sight and easily seen or photographed by any guest staying at the resort, either of these “concerns” seem a bit silly. (In my estimation, the real reason always has more to do with power.)

In any case, I politely acquiesced, stopped taking photos, and moved along. My unquestioning compliance was “rewarded” by the security guard slowly trailing me on his bike as I walked back to our room. In turn, I decided to take the slowest, most meandering route possible, stopping to take photos of random stuff I had zero intention of using. I probably wasted my own time more than I wasted his, but it felt satisfying at the time. Sometimes the “battles” security picks boggle my mind–I’m sure zero other guests have taken photos of this construction occurring in plain view–but whatever.

Hopefully that “thrilling” anecdote spiced up what I realize is otherwise a pretty boring construction update. To our knowledge, the goal is still to have the Disney Skyliner gondolas up and running by mid-2019. Given the slow pace of construction, that seems like an ambitious timeframe, especially considering the pillars that’ll need to be added around Walt Disney World along the Skyliner route. Nevertheless, we fully expect this to open in advance of Star Wars: Galaxy’s Edge, so perhaps the pace will pick up or progress will be more readily apparent in the next few months. Either way, we’re really excited for the Skyliner.