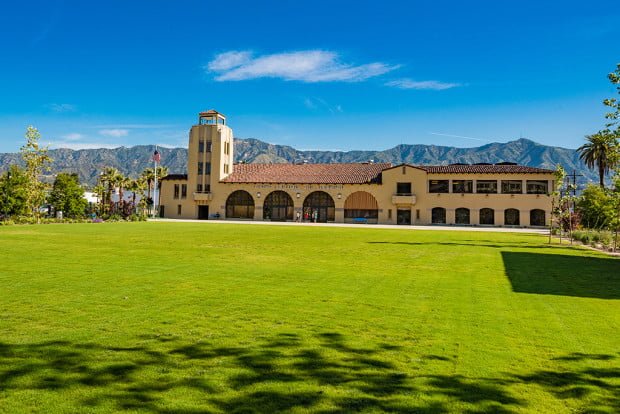 Grand Central Air Terminal is a historic airfield in Glendale, California. Disney purchased and restored the airport to its original grandeur, and we toured Grand Central Air Terminal (GCAT) recently to see the completed project. The airport is now part of the Disney Grand Central Creative Campus, which includes Walt Disney Imagineering and Disney Interactive, among other divisions. Hence it being covered on this blog. It’s probably not something many of you planning a trip will ever see (unless you’re a big enthusiast of office parks!). However, given the rich history of GCAT, ties with Disney, and the cool work done with the restoration, I thought it would be worth sharing here.

While LAX is known today as the Los Angeles area’s workhorse airport, when it opened in the 1920s, GCAT was actually the main airport in the Los Angeles area. It wasn’t until the late-1940s that LAX displaced Glendale (and Burbank) as the main commercial airports in the area. Being the main airport in Los Angeles during the golden age of flight‘s formative decades, GCAT developed a rich and glamorous history playing host to individuals who were instrumental figures in the history of aviation.

Howard Hughes, Amelia Earhart, Charles Lindbergh, and Laura Engalls all used Glendale as their home airport or did significant work there. Being in close proximity to Hollywood, it was also used extensively for filming, with Shirley Temple, James Cagney, and Ronald Reagan, among many others, all filmed at GCAT. Imagine walking on the hallowed ground where Pee Wee had part of his Big Adventure. Chills. How this place wasn’t declared a National Historic Landmark after the filming of that treasure concluded is truly beyond comprehension.

World War II forever altered the trajectory of Grand Central Air Terminal. The army used the airport as a defense base during the war, and afterwards, it was unable to successfully regain its stature as a commercial airport due to complaints by adjacent residents about noise. The runway was shortened as a result, and was too short for new commercial planes of the era. Most flights moved to LAX, and GCAT hobbled along as a private airfield until the last airplane took off from Grand Central in 1959. The terminal building became part of a Glendale office park. One of the first companies to move into the building was WED Enterprises (now known as Walt Disney Imagineering), which made it their original creative campus. After purchasing the office park, Disney announced plans to restore the terminal, and completed the work late last year.

With work now complete and small tours being offered of the building, let’s take a look at the results… 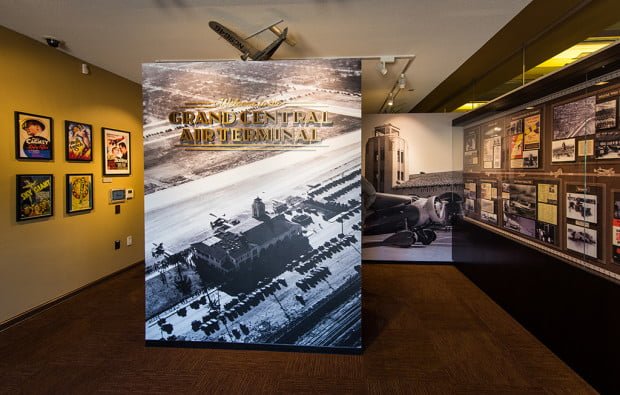 Upon entering the lobby, you’re greeted by a few displays showcasing the history of Grand Central Air Terminal. 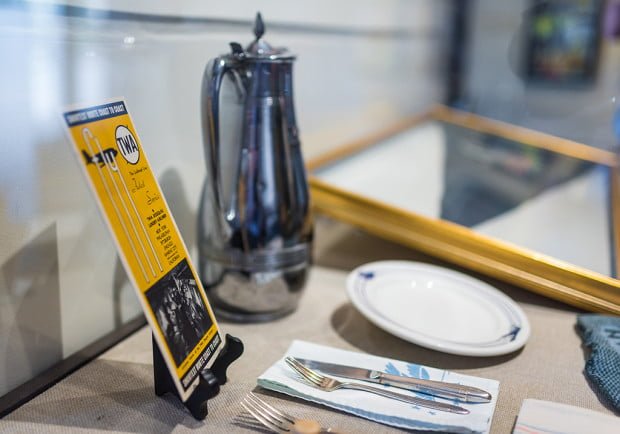 The airport has numerous pieces in displayed that are on loan from the various airlines. 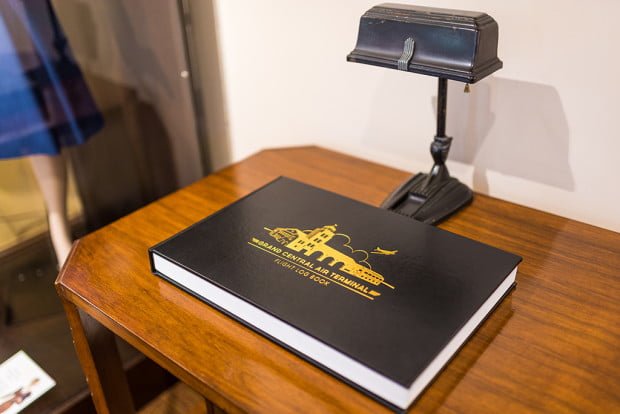 During the restoration project, years of flight logs were found stuffed in the attic of the control tower. They’ve been scanned and compiled into this log book. 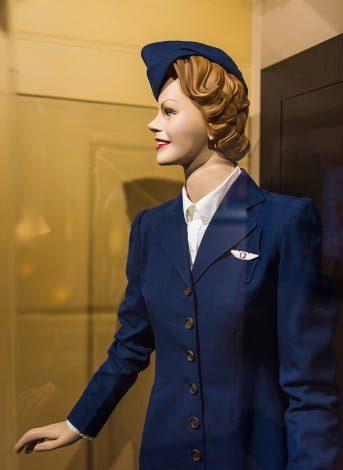 The winter-wear of an American Airlines flight attendant. The Airport also has a summer outfit that will be swapped out. (Looks like we’ll have to take a second tour for that exciting event!) 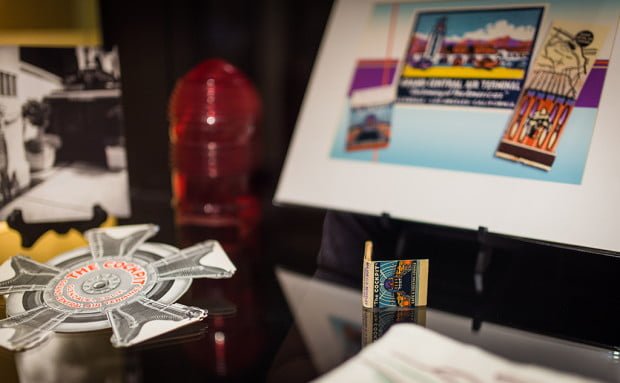 Plenty of ephemera and other items from actual GCAT flights on display.

One of the coolest pieces in the little gallery area is this large map depicting the first 48-hour flight itinerary from New York to Glendale, which showed the legs that were by plane and those by train, as well as sites over which the planes would fly. It sounds very much like an air-tour of the United States as it does a means of getting from Point A to Point B. 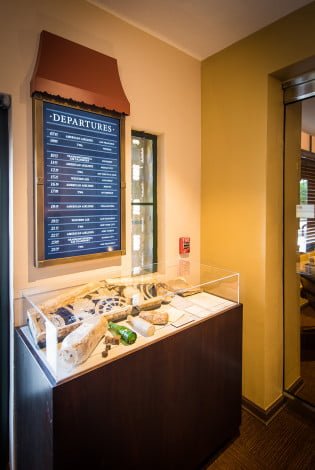 Just inside the entry doors are arrival and departure boards that show actual flights that would’ve come into and departed Glendale. 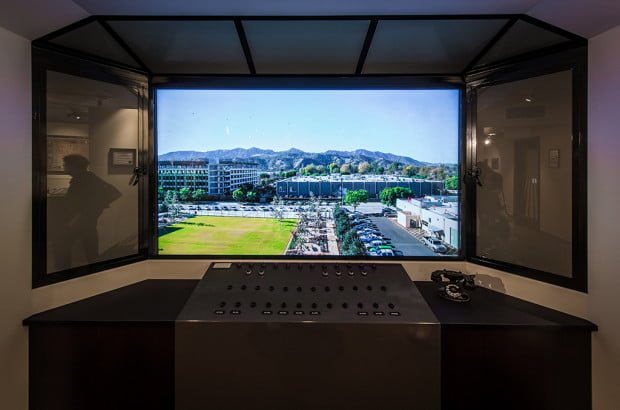 The focal point of the gallery and visitor center is this recreation of the control tower, which normally shows a video loop of present-day Glendale (complete with Buena Vista Street background music!). During tours, it runs a 10-minute or so video covering the highlights of the airport’s history via significant figures in its history (including Disney Legend Bob Gurr). 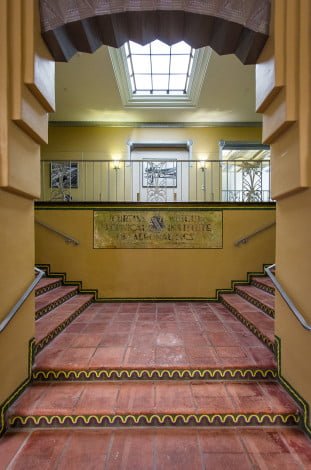 From the main lobby, there’s what appears to be an office for D23 (we didn’t enter), and a large event space. This event space would have been the passenger waiting area during the airport’s days of commercial operation. This event space features the most intriguing interior architecture. 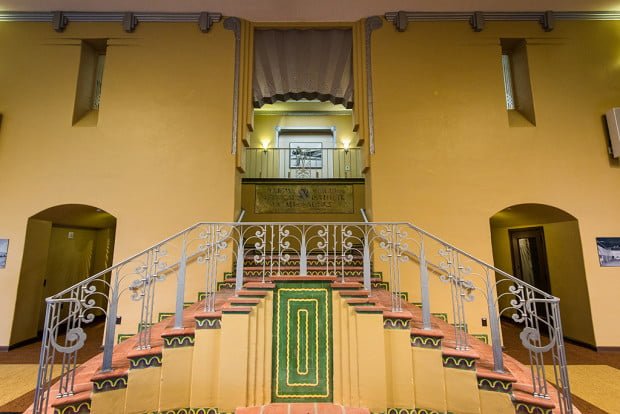 Architect Henry L. Gogerty designed the airport and control tower, combining Spanish Colonial Revival with Art Deco and Streamline Moderne influences. These contrasting styles work really well in the context of the airport. During the video that played in the lobby, it was speculated that Gogerty utilized Spanish Colonial Revival architecture more heavily on the exterior to evoke feelings of old-California as guests arrived at the airport, with more Art Deco on the interior to make guests feel as if they were departing from the future. Whether that’s actually true is anyone’s guess, but it’s a good story. 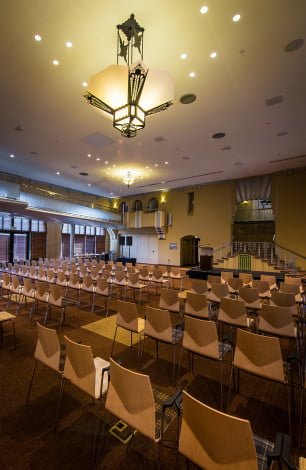 Outside of the lobby and event space, there’s not a lot that’s open to the public. GCAT is functioning space for Disney, and obviously people don’t want tour groups wandering through their offices. 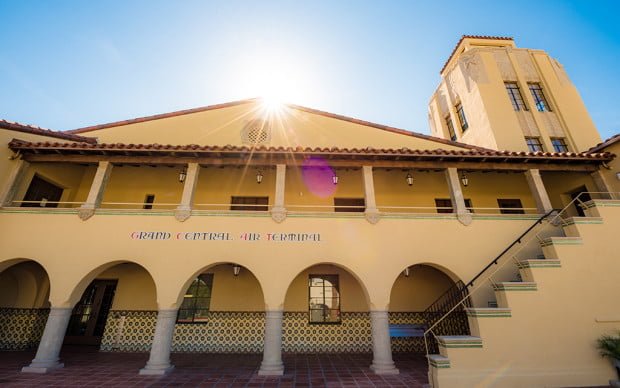 Overall, Grand Central Air Terminal is a neat little spot both for aviation buffs and Disney fans. The design of the building is really fascinating, and in the restoration and new design, there are areas that have very clearly been “Imagineered.” With that said, it’s hardly a must-do and I doubt D23 or Adventures by Disney will be adding it to their itineraries for events in the area–but that’s probably not the intent. It’s one of those things that’s cool to know exists, but that’s about it. Disney definitely deserves kudos for dumping (what I assume was) millions of dollars into the restoration, as it’s certainly a building with historical and architectural significance. Hope you enjoyed the vicarious tour!

If you’re preparing for a Disneyland trip, check out our other planning posts, including our comprehensive Disneyland Vacation Planning Guide!

What do you think of Grand Central Air Terminal? Share any questions or additional thoughts you have in the comments!