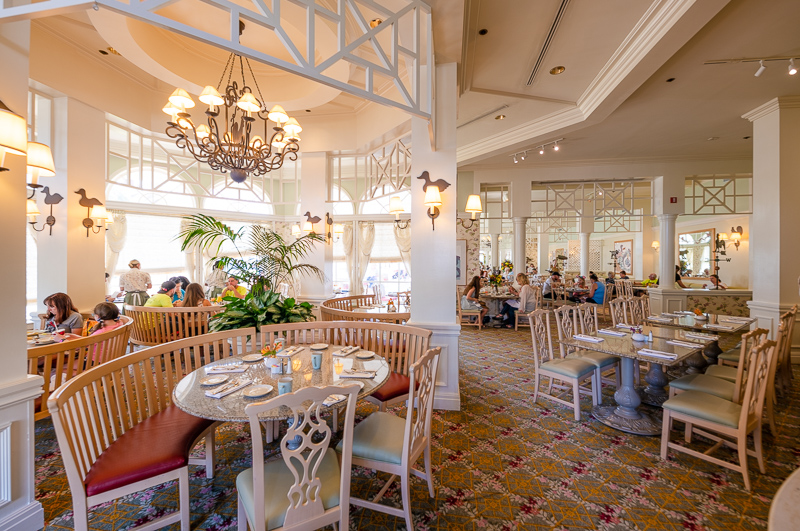 For years, one of this blog’s Walt Disney World dining ‘commandments’ was to do grocery delivery and eat breakfast in your hotel room because restaurants were generally uninspired and overpriced. About the only exception to that general rule was Trail’s End (which is still my personal favorite), Kona Cafe, and a few character dining options.

We’ve seen a gradual erosion to this, with Boma and the Wave both making the cut a couple of years ago. This year, it seems like the dam has broken, with Ale & Compass Restaurant being praised for its menu plus buffet one-two punch and Bon Voyage Adventure Breakfast rating as one of the best overall character meals at Walt Disney World.

On a whim we recently decided to take my parents to breakfast at Walt Disney World. At the last minute, there weren’t a ton of options that appealed to everyone, so we opted for what sounded like a middle-of-the-road crowd-pleaser: Grand Floridian Cafe…

We’ve done breakfast at Grand Floridian Cafe a couple of times prior to this, but I think the most recent visit was roughly a few years ago. Since then, we’ve heard some praise from friends for the restaurant’s new-ish menu for “blunch” (I’m not sure why this unappetizing hybrid is a thing), which offers a mixture of breakfast and lunch items until 2 pm. I’ve always been a fan of their Lobster Eggs Benedict, so failing all else, at least that would be a viable option.

Some strengths of Grand Floridian Cafe are a large and diverse menu (and that’s true for every meal, not just breakfast) plus the ease of dining here without Advance Dining Reservations. It’s also worth noting that Grand Floridian Cafe participates in the Disney Dining Plan as a 1-credit table service restaurant, and also accepts the Tables in Wonderland card. 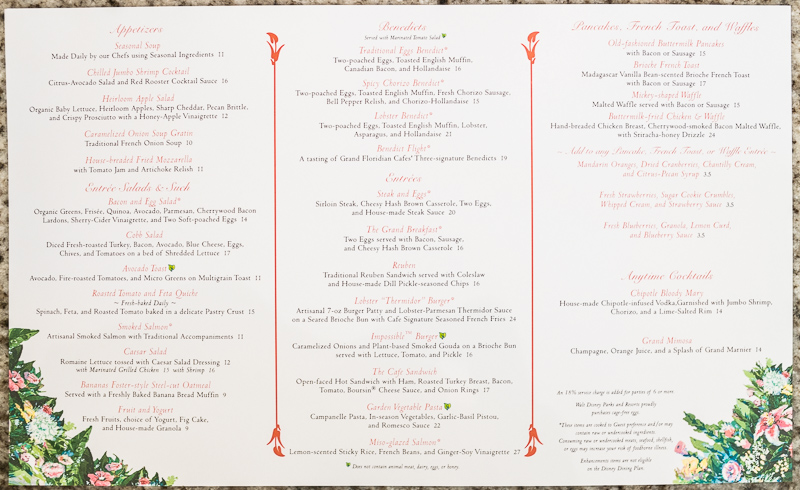 In terms of ambiance, Grand Floridian Cafe is nothing special. The restaurant’s strengths on this front are the bright and airy environment with lovely views outside into the garden.

It’s also nicely divided with a number of rooms and variety of tables to break up the space and give it a greater feeling of intimacy. All of that plus a lot of fabric and a generally older crowd makes Grand Floridian Cafe a quieter and generally more laid back way to start the day. 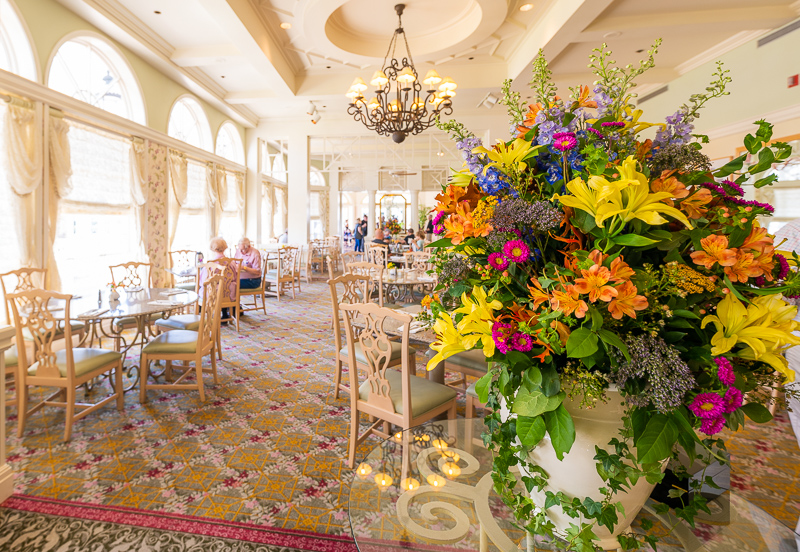 In terms of the decor inside, Grand Floridian Cafe feels dated in some of the same ways as its namesake resort as a whole. There’s a lot going on in terms of floral patterns, textures, wallpaper, and furnishings that is less reminiscent of a straightforward Victorian design and more like a quaint but affluent farmhouse done up in a Victorian style.

So many Disney Springs restaurants have designs that look like barn interiors that have been repurposed by rustic hipsters; this is basically the Floridian farmhouse version of that, albeit from a couple decades earlier. It’d be “great” if Imagineering would come up with a cohesive storyline explaining how the same multi-generational family owns both Grand Floridian Cafe and D-Luxe Burger, with grandparents running this farmhouse restaurant and allowing their entitled grandchildren to open another restaurant in the barn. 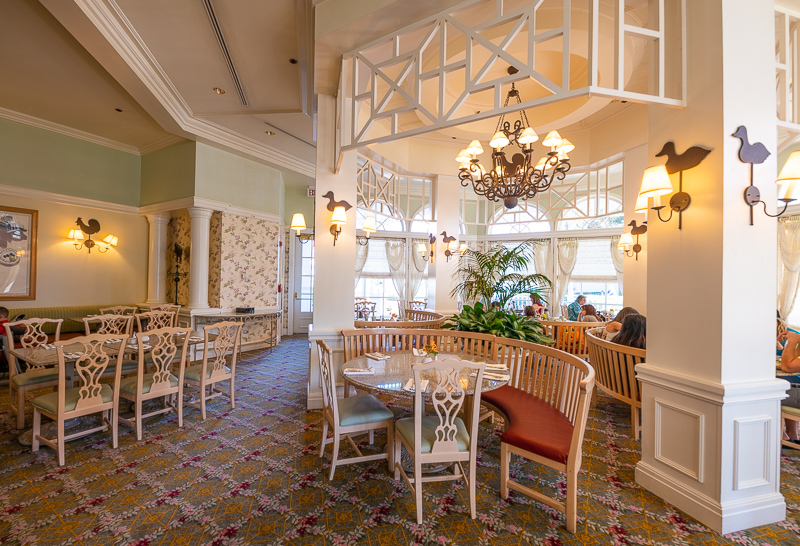 Joking aside, there’s also a certain charm to Grand Floridian Cafe. It truly is imbued with a certain ‘Florida’ quality to the space that’s tough for me to articulate. Maybe the country style, natural light, and Victorian flourishes give it the quality of a family-run bed & breakfast? 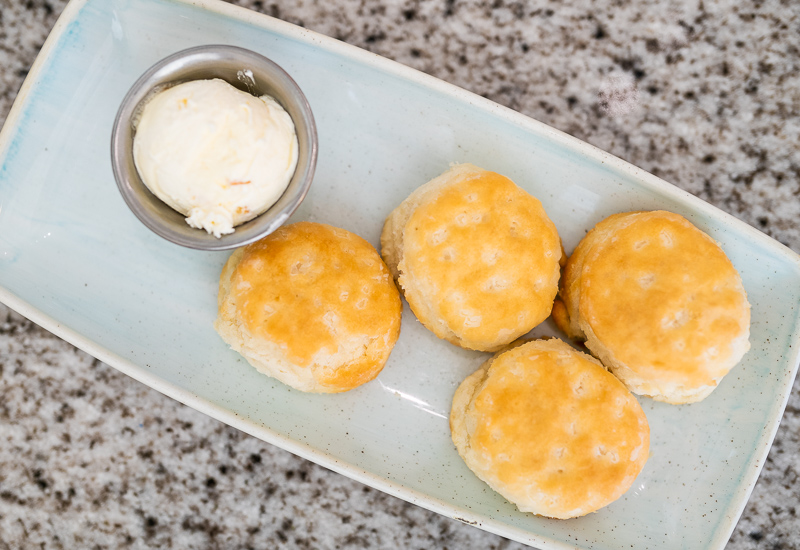 Our server ended up bringing out three helpings of these biscuits over the course of our meal because we quickly devoured each plate. As good as the entrees are, these biscuits are still a standout. 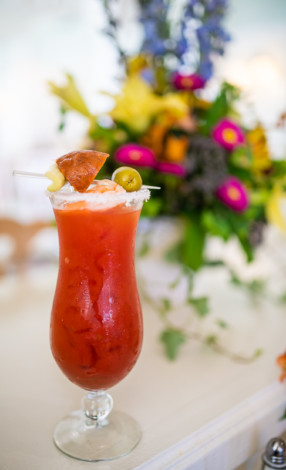 Before we get to the exceptional entrees, let’s get the lone disappointment of the meal out of the way: the Chipotle Bloody Mary, which consists of House-made Chipotle-infused Vodka, Garnished with Jumbo Shrimp, Chorizo, and a Lime-Salted Rim.

It’s not that this was bad, it just wasn’t anything special–an ordinary, relatively-weak Bloody Mary topped with a piece of sausage. Not nearly as interesting as the menu suggests. 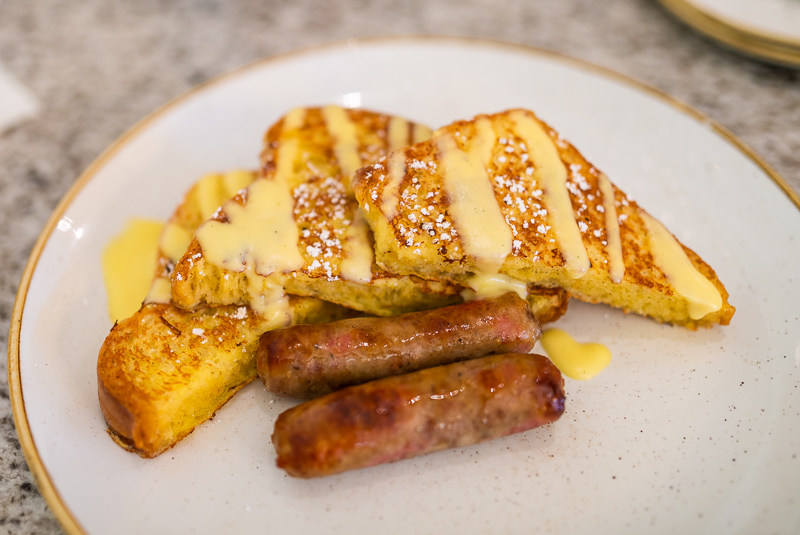 This was fantastic. More decadent and richer than normal French toast–just enough to make it an interesting and ambitious twist on a familiar breakfast favorite. 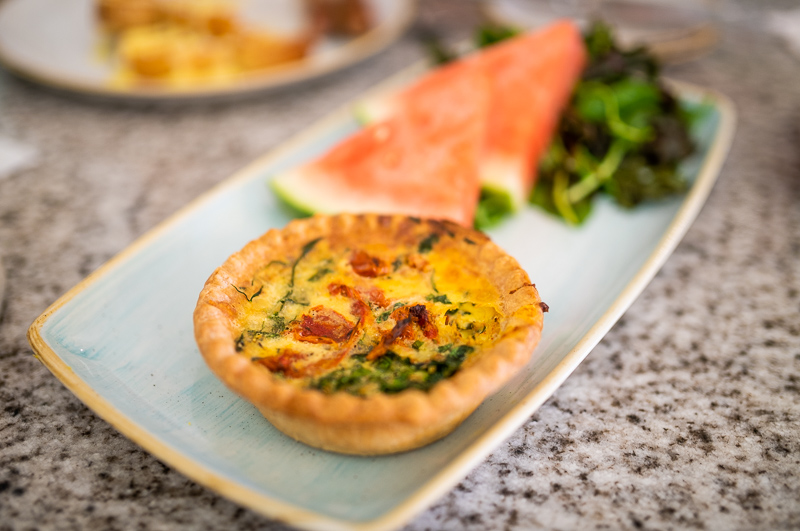 Another excellent dish; hearty and savory, with bold flavors without being overly dense or heavy. Our one complaint here is that it’s a tad small. For some reason this is on the “Salads & Such” menu, which is a bit odd because I wouldn’t really consider this a light dish. 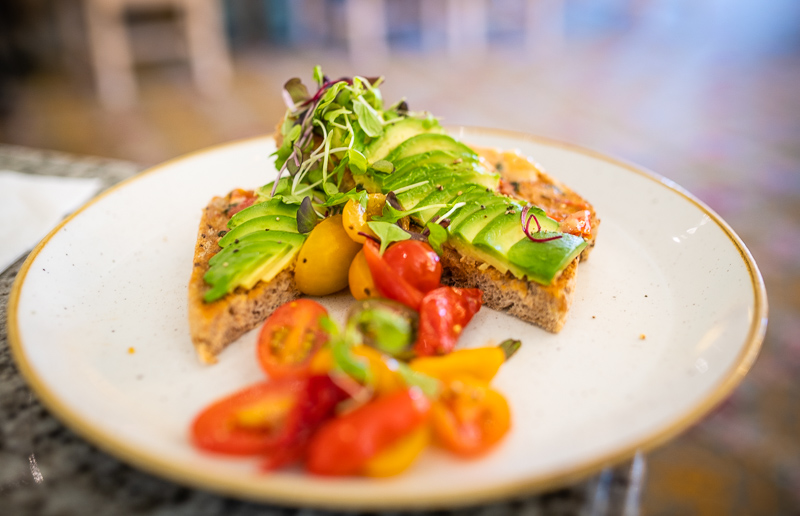 Being millennials, of course we couldn’t resist the Avocado Toast.

This was fine, but wouldn’t be my first choice. The avocado toast had a ‘farm fresh’ quality that felt oddly appropriate for the quaint and homey setting; perhaps it’s what the grandparents make for their barn-dwelling grandkids when they’re allowed to enter the house. 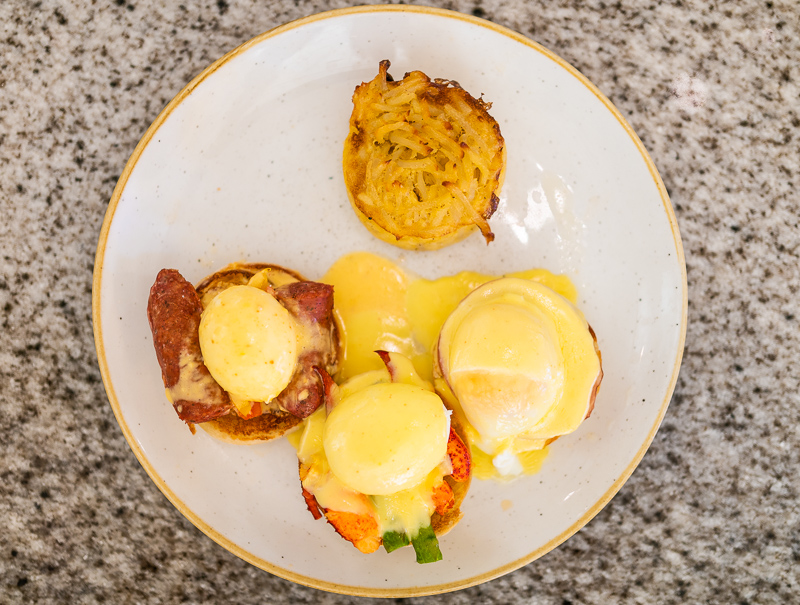 This is normally served with Marinated Tomato Salad, but I ordered it with Cheesy-Hash Brown Casserole (as one should) instead. 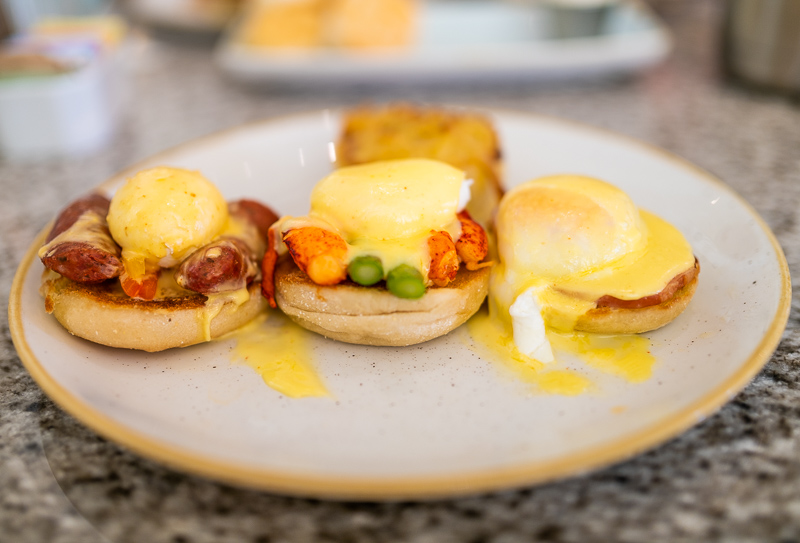 The Lobster Benedict is one of Grand Floridian Cafe’s signature breakfast dishes, and it lives up to the hype.

I preferred the Spicy Chorizo Benedict. The sausage provided a nice snap and contrasted with the egg and muffin nicely. The hollandaise sauce was perfectly rich, making for a delightful dish that’s more exciting and punchier than you’d expect from a restaurant that looks a lot like a Floridian grandma’s living room.

With that said, I’d recommend ordering one of those two Benedict entrees (not the flight or the Traditional Eggs Benedict, because that’s the most boring of the bunch). In addition to what we ordered, which was all good to great, the Buttermilk-fried Chicken & Waffles and the Steak & Eggs both looked good from a distance–I’d order one of those two things next time. 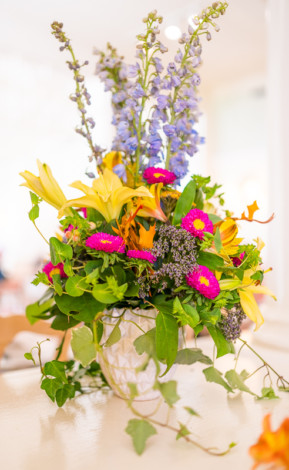 Overall, Grand Floridian Cafe maintains its reputation as a ‘workhorse restaurant’ with this breakfast. It’s not Walt Disney World destination dining, which is to say there’s nothing thematically that makes it a must-do, nor are there any menu items that’ll absolutely blow your mind or you’ll be craving between trips.

Are you a fan of breakfast at Grand Floridian Cafe? Any entrees you recommend–or do not recommend? Do you agree or disagree with our review? Any questions we can help you answer? Hearing your feedback–even when you disagree with us–is both interesting to us and helpful to other readers, so please share your thoughts below in the comments!