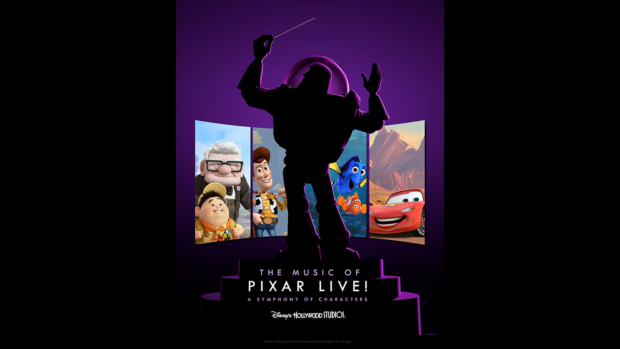 Starting May 26, 2017, Disney’s Hollywood Studios will present “The Music of Pixar LIVE! A Symphony of Characters” for a limited summer run at Walt Disney World. This concert will feature music from Pixar Animation Studios films performed by a live orchestra and appearances by Disney-Pixar characters.

For the duration of the summer, “The Music of Pixar LIVE!” will be presented three times nightly at Theater of the Stars at Disney’s Hollywood Studios, which is where daily performances of “Beauty and the Beast — Live on Stage” are currently held–and will continue to be held.

The Music of Pixar Live! show will showcase highlights from some of Pixar’s greatest scores, including Toy Story, Monsters Inc., Cars 3, The Incredibles, and many other films. There will also be appearances by Woody, Jessie, Mike and Sulley, the Incredibles and more. I’ve been highly critical of Disney’s Hollywood Studios in the last couple of years on this blog, so I thought I’d take a moment to address this news…

Honestly, my first thought when I heard about this was, “wow, they are actually going to cut Fantasmic for the summer.” Once I realized this was not going to be in the same theater as Fantasmic, my attitude changed dramatically. (That’s how jaded I’ve become towards changes at Disney’s Hollywood Studios–I’ve become programmed to default towards skepticism.)

Frankly, I’m shocked and impressed. I’ve been saying for a while now that Disney’s Hollywood Studios needs more temporary entertainment to fill the void during construction, and this is a potentially great offering. Not only is it something that can appeal to guests of all ages with both the orchestra and the characters, but it really fits the theme of the park.

This is exactly the type of concert that would be part of the summer series at the Hollywood Bowl amphitheater (well, except for the characters). Also, while different in style, it seems similar to the concerts during Festival of the Arts at Epcot, which were absolutely awesome.

It’s also nice to see that there will be 3 nightly performances of The Music of Pixar Live! One of the biggest complaints we hear from readers regarding Disney’s Hollywood Studios is that it’s impossible to enjoy both Fantasmic and Star Wars: A Galactic Spectacular on many nights.

Very few people want to spend two days at Disney’s Hollywood Studios (shocking, right?), making it frustrating that they’re not able to see both nighttime spectaculars during a 1-day visit. This concert should not have that same issue.

So, kudos to Walt Disney World where kudos is due. The idea of an orchestra performing Pixar music really appeals to me (I just hope it doesn’t skew heavily towards Cars 3 as some sort of promotional effort for that movie), and I’m really optimistic about what this new concert bring to the table. Obviously, the jury is still out on its quality until the show debuts, but it seems like something that would take an active effort to screw up. I hope this is just the start of special, temporary entertainment offerings at Disney’s Hollywood Studios; we’ll keep you posted on that.

Are you looking forward to The Music of Pixar Live? Do you agree or disagree with our take that Disney’s Hollywood Studios needs more temporary entertainment during construction for Toy Story Land and Star Wars Land? Share any questions, tips, or additional thoughts you have in the comments!

10 Responses to “‘The Music of Pixar Live!’ Coming to Disney World”