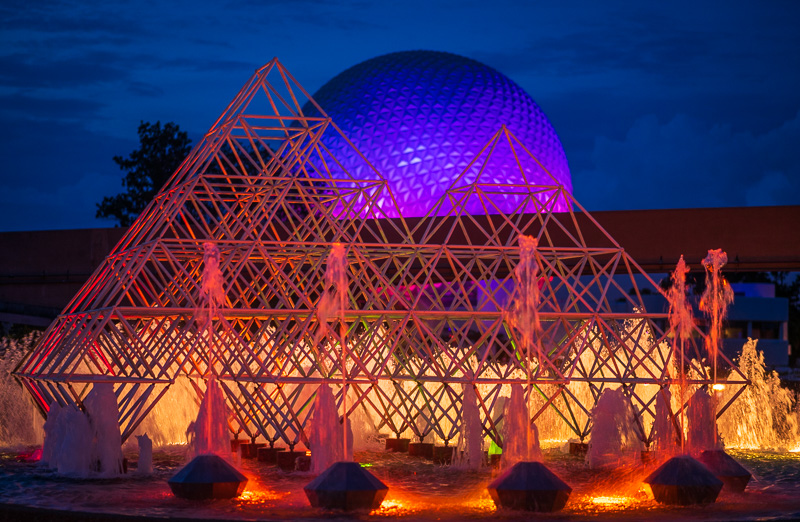 It’s time for another COVID-19 report covering new case, positivity, and hospitalization data from Orange County as of January 19, 2022. Plus, on-the-ground commentary and an optimistic update, as it appears that the Omicron-driven surge of new cases has already peaked, and hospitalizations have plateaued.

Just to put things into context, this average is higher than during the peak of the Delta wave, last holiday season’s surge, or at literally any point last year. However, there’s cause for optimism as this number has been trending downward for a full week now, offering ample evidence that the Omicron wave has peaked in Florida.

This would not be hugely surprising. In our last COVID report almost two weeks ago, we shared a report from researchers from the University of Florida with their model forecasting that the Omicron wave would peak in mid-January 2022. Their findings further stated that infections would peak even earlier, a discrepancy we’ll explain later in the post.

The latest daily trends data for the state of Florida reported to the CDC suggests that the UF model was right: 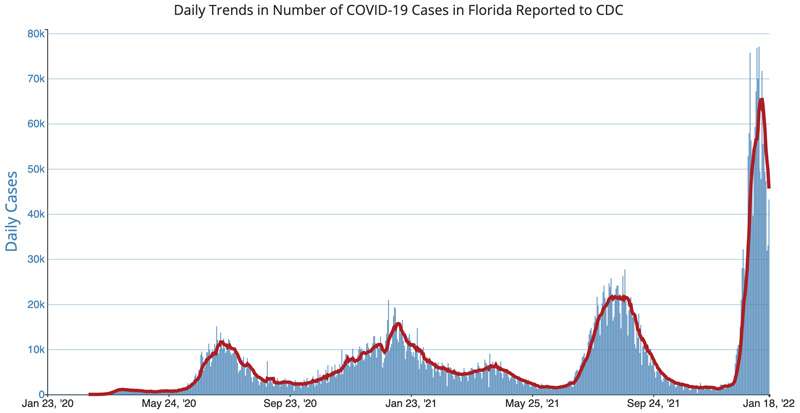 This is not simply a result of reduced testing. Although the number of tests performed in Orange County, Florida has decreased by 2% in the last week, positivity is down by 6%. Statewide data shows a similar decrease, but is considered incomplete until the weekly report that’ll be released on Friday.

With that said, testing positivity rates are still anything but “good.” To the contrary, they’ve soared from their pre-Omicron levels in the 5% range, to what the CDC considers “uncontrolled spread” now. Orange County’s average positivity rate currently stands at 35.61%, which is (still) firmly in the red/high tier of the CDC’s Community Transmission Map.

Another positive development is that Florida is once again middle-of-the-pack among states for average daily cases over the past week with 231 per 100,000 people (see below). That’s down 12% in the last two weeks, which is not a huge drop, but is relative to other states.

As you can see from the chart above, many states have increased by 100% or more during the past 14-days. By contrast, those that got hit early by Omicron–like New York, New Jersey, Michigan, Georgia, and Florida–appear to have already seen the worst of the wave. 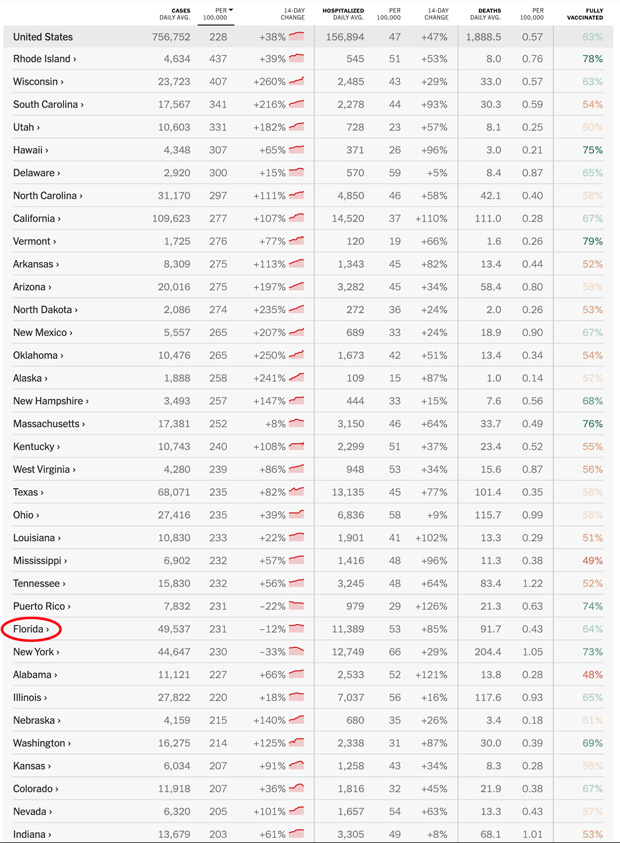 For greater certainty that the peak has passed, it would be helpful if Orange County Utilities shared more regular data from its participation in the CDC National Wastewater Surveillance System. This program provides an advance warning of infections through analysis of RNA concentrations in water reclamation facilities across the United States.

Throughout the pandemic, wastewater monitoring has been incredibly insightful. It’s akin to a Doppler radar early-warning system for COVID-19, detecting infections in people who are pre-symptomatic or asymptomatic–thus explaining the aforementioned discrepancy between infections and case numbers.

If you follow this subject a little too closely (guilty), you might’ve seen recent stories about wastewater in Boston, New York, San Francisco showing that infections had already peaked in those cities, as wastewater concentrations were plummeting. Or, you might recall during the Delta wave when Orange County Utilities offered regular updates and accurately predicted the end of the Delta wave before that was reflected in the official case numbers. 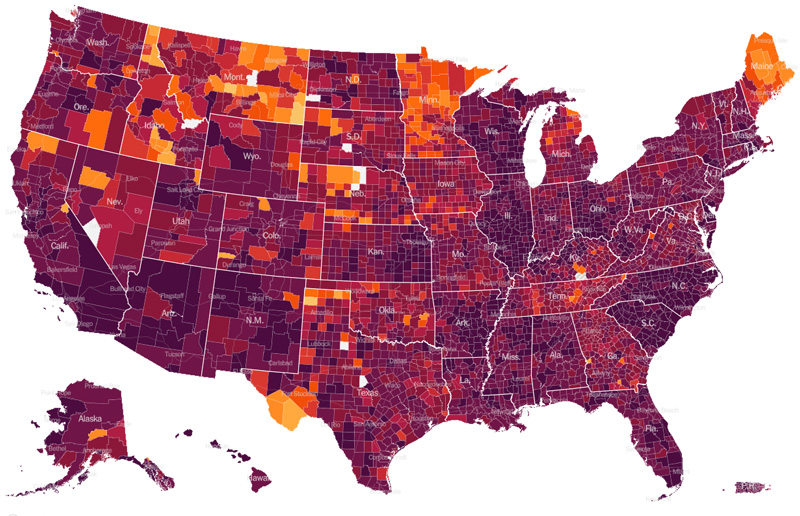 The most recent update we have from Orange County Utilities came last week when a record high amount of virus was circulating in the wastewater at all three of the OC Water Reclamation Facilities. Unfortunately, we don’t have any data to see just how far or fast the virus concentration numbers have fallen in Orange County since.

For anyone who would like to take a deeper dive into the data we do have, consult the below resources for numbers reported and compiled by local, state, and national organizations: 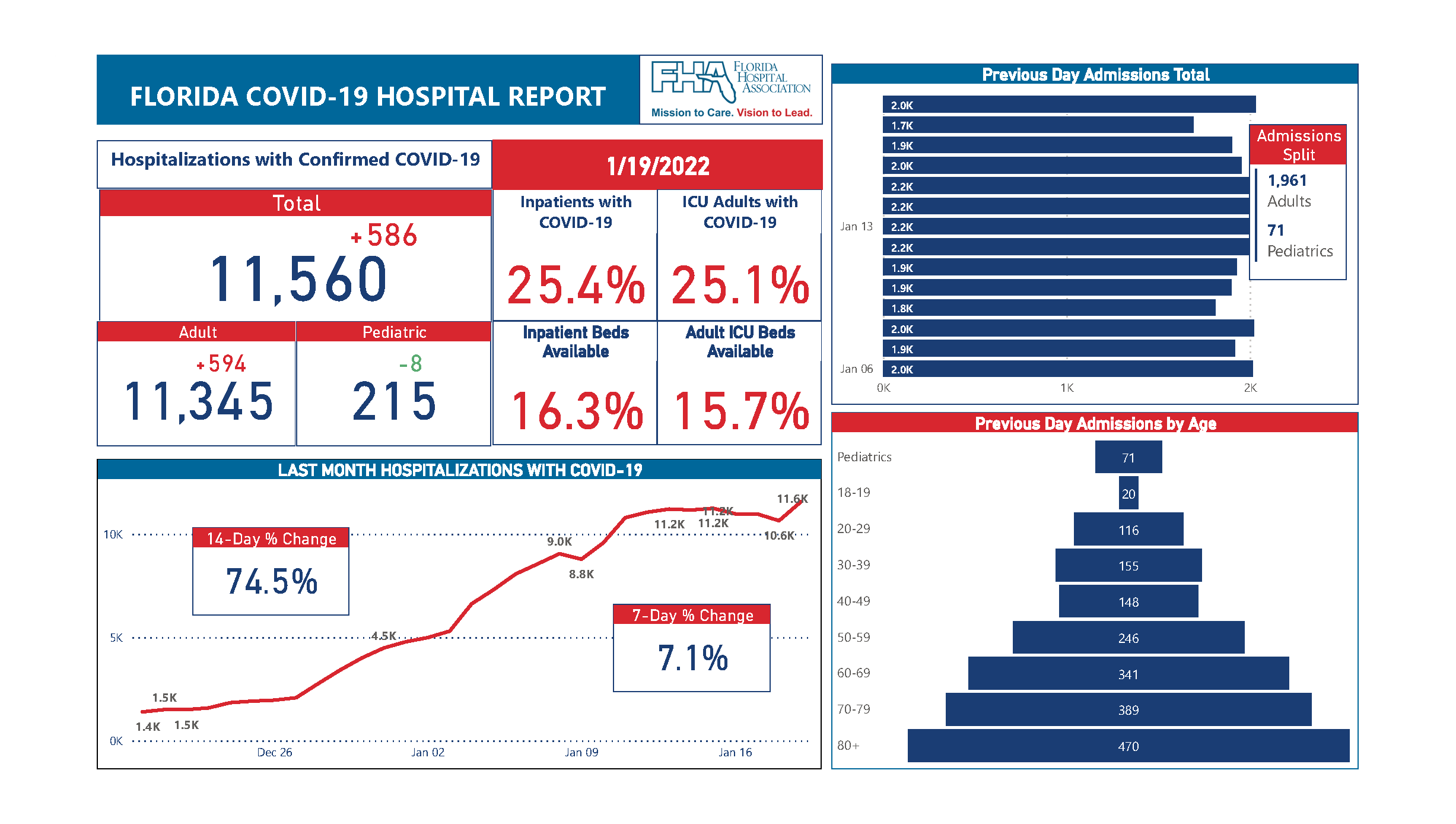 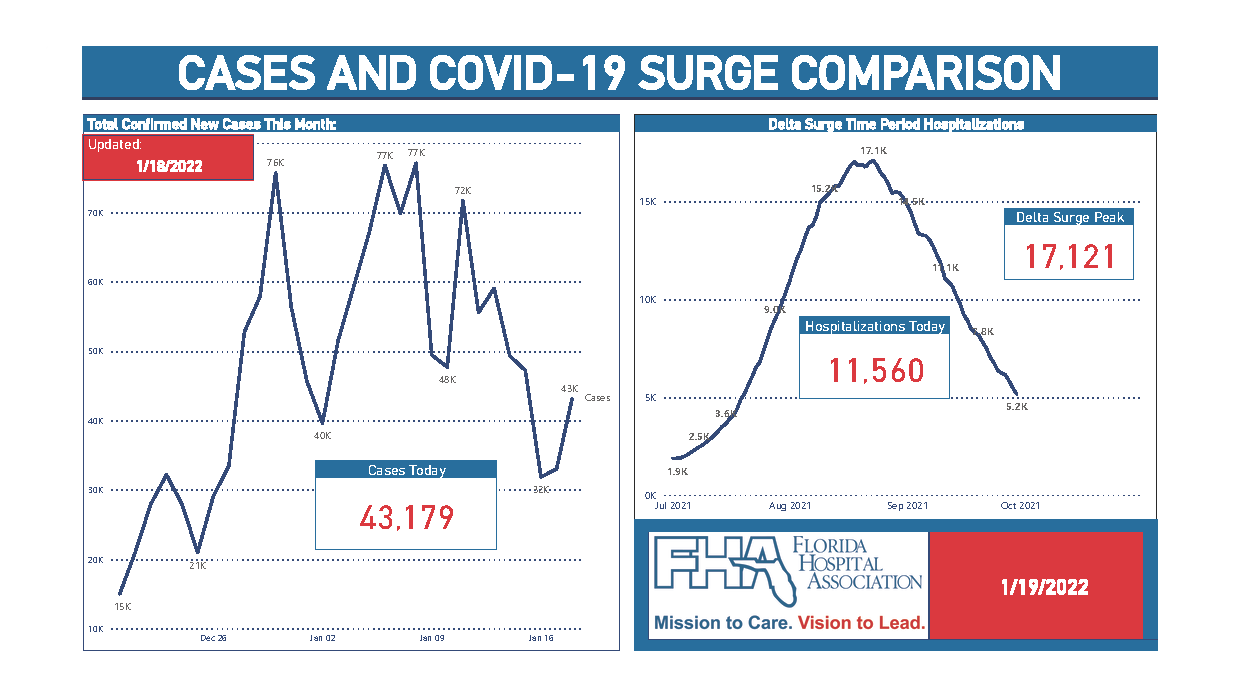 During the Delta wave, hospitalizations peaked at 17,121. That’s despite daily case numbers topping out at around 21,000 versus an average of 61,000 cases during the crest of the Omicron wave.

As previously discussed, there has been a decoupling between cases and hospitalizations in places where Omicron was detected early and has progressed further. In particular, South Africa and the United Kingdom have not had anywhere near the level of hospitalizations as they did during prior waves. The same is also true in the Northeastern United States, much of which is now past-peak. Given that hospitalizations appear to be leveling off in Florida, it’s also likely the state will not surpass hospitalizations at the Delta peak. 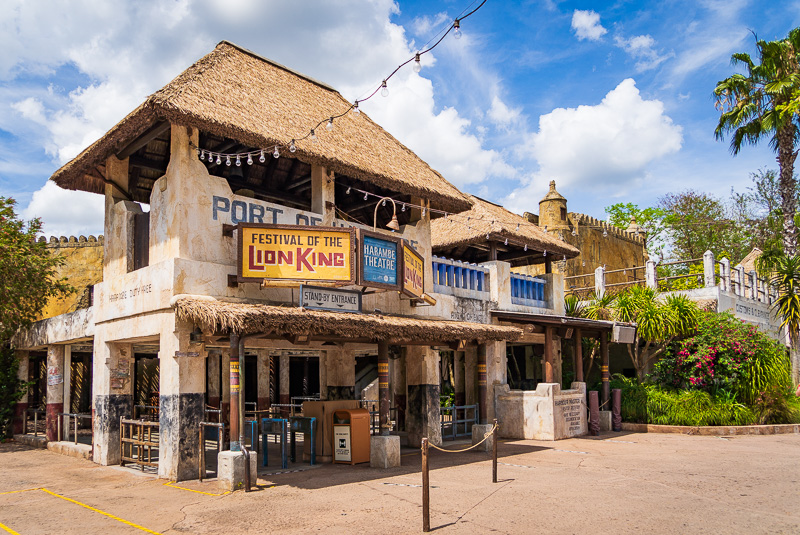 Finally, we’ll conclude with an on-the-ground report from around Orlando. We’ve heard from more Florida residents and visitors thus far in 2022 who had confirmed or suspected cases than during the previous two years combined. That’s right, more people in a little over two weeks than in almost two years. While that’s obviously anecdotal, it’s a pretty consistent story with others we know. This includes plenty of guests who visited Walt Disney World as well as Cast Members.

To the latter point, there have been so many outbreaks among Cast Members that some locations at Walt Disney World have been impacted. You might’ve seen reports of plans “inexplicably” being cancelled, venues “randomly” closing, or other locations open but operating incredibly inefficiently. Omicron outbreaks are the reason for much of that.

Due to staffing shortages, there were a number of spots around Walt Disney World that were operating without a safety net, so to speak, even before Omicron. (There’s a reason why so many table service restaurants are closed two nights per week, and it’s certainly not a lack of demand!) During the last couple of weeks, those staffing woes have been further exacerbated by virtue of infection levels.

A similar phenomenon is occurring throughout the United States. In the Census Bureau’s Household Pulse Survey from December 1-13, approximately 3 million people said they were not working because “I was caring for someone or sick myself with coronavirus symptoms.” When asked that same question between December 29 and January 10, 2022, 8.8 million people reported being temporarily off work for that reason. As the Omicron wave is put in the rearview mirror, hopefully these numbers start decreasing–we’ll be watching that survey in the coming weeks.