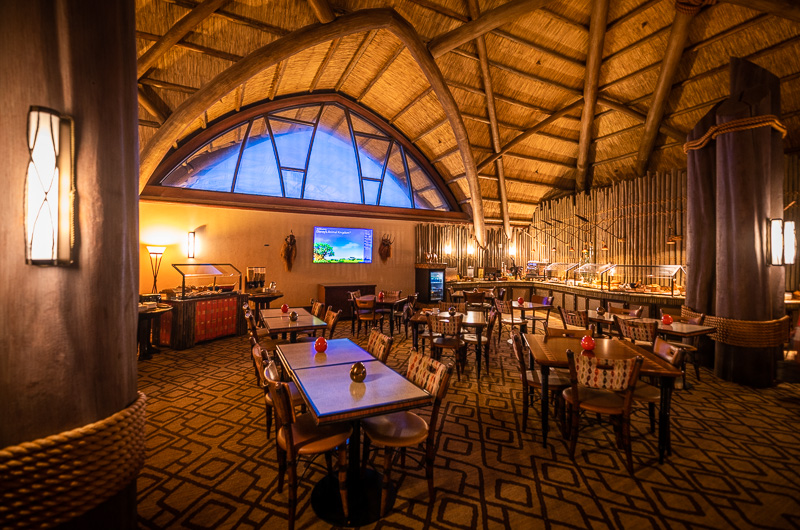 Club Level has reopened at Walt Disney World! In this report, we’ll share our experiences with the first concierge lounge to return, photos & video of the food & beverages served, how things are different or the same, and more.

As a quick reminder, the company announced Club Level Reopening Dates at Walt Disney World Resorts back at the start of this summer. At the time, the first to return would be over 3 months later when the Grand Floridian’s Royal Palm Club was slated to reopen on September 16, 2021. In our commentary, we speculated that Walt Disney World was being conservative with those dates and some other Club Levels could be slotted in as their hotels reopened and staffing allowed.

Our guess at the time was that King Kamehameha Club would be the first to reopen, alongside Disney’s Polynesian Village Resort, which didn’t yet have a specific return date at the time. That proved incorrect, but perhaps mostly because King Kamehameha Club was one of the components of that resort reimagining that wasn’t finished when the new guest rooms debuted late last month…

As vacation cancellations started piling up at the beginning of this month, we noticed Disney Vacation Club had availability for Kilimanjaro Club rooms on the opening night of Animal Kingdom Lodge. Nothing had been announced about anything returning to Jambo House at the time, but those Kilimanjaro Club rooms are usually impossible to book with DVC points, so we took the gamble.

Shortly thereafter, Walt Disney World quietly offered Kilimanjaro Club rooms for booking on the hotel side of Animal Kingdom Lodge – Jambo House. That was a rousing victory at the time, but was followed by weeks of compulsively checking to see if the return of Kilimanjaro Club had been delayed. It felt too good to be true to book one of those 10 rooms on reopening night as lowly Saratoga owners. 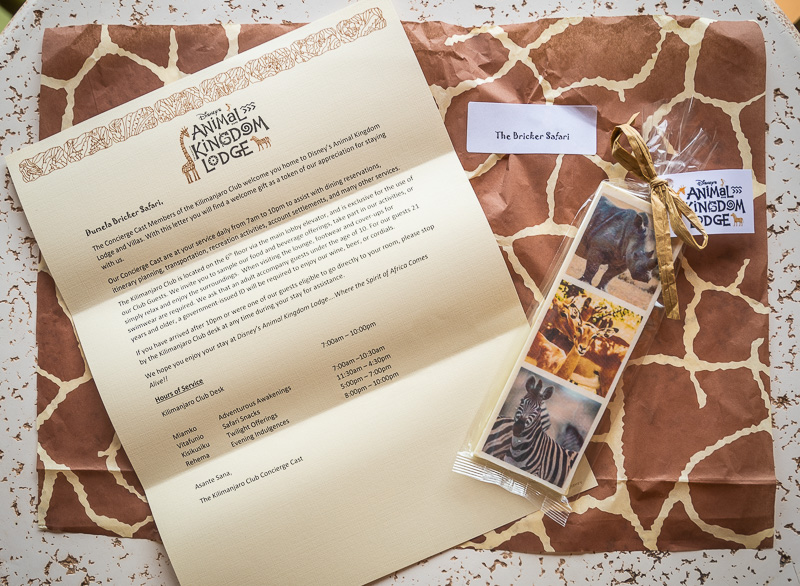 All that worrying was for nothing, as Walt Disney World moved forward with reopening Kilimanjaro Club as planned. Not only is it back, but like Boma before it, Kilimanjaro Club is just as great as ever.

Before we get started, I want to give a quick “shout out” to the Kilimanjaro Club Concierge Cast Members. Animal Kingdom Lodge always has a great team, including many opening day Cast Members who are still around. This stay (and also our previous dinner at Boma) was even better than normal, though. It really seems like everyone is excited to be back, with the lounge crew being chatty, enthusiastic, and helpful. They elevated the experience in ways that obviously cannot be captured in photos–but bear mentioning. 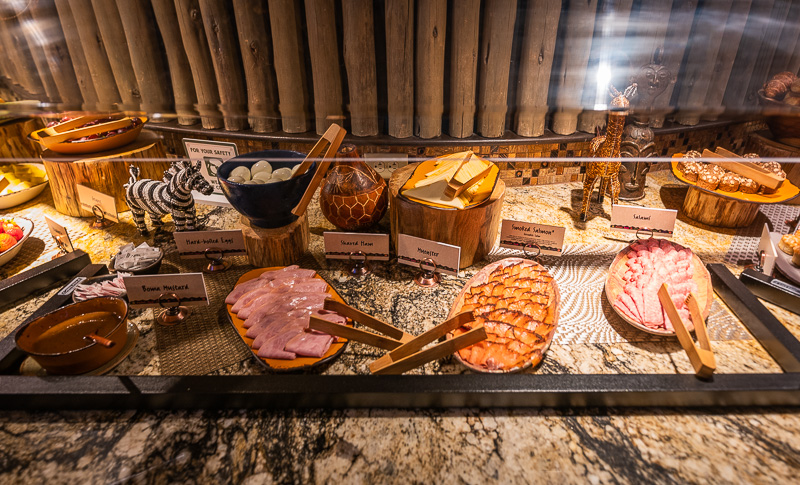 The only big thing we noticed was the addition of sneeze guards above the food.

Now, we hadn’t stayed at Kilimanjaro Club for approximately a year pre-closure, so it’s possible this isn’t a new addition. However, in reviewing all of our Club Level photos, I didn’t see sneeze guards in use anywhere previously. We’re going to file this one under: good ideas regardless of what’s happened in the last year that probably should stick around permanently. 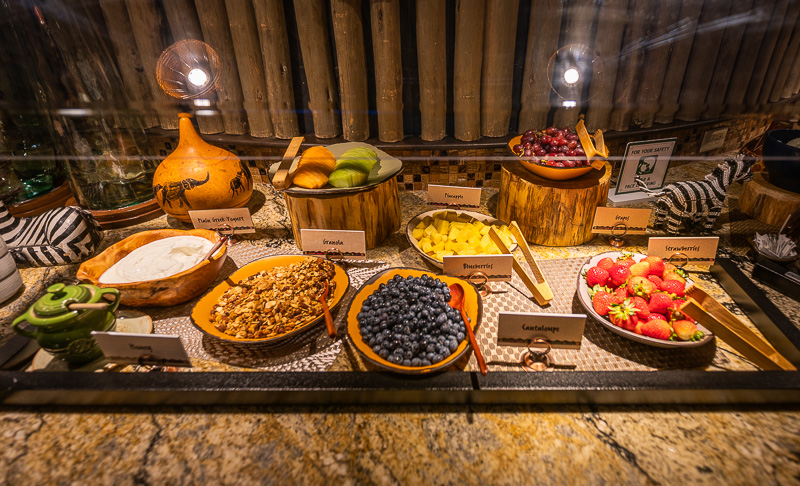 In terms of significant presentation changes, that’s it. There were also a couple “please wear masks indoors” signs and a hand sanitizer station, but nothing else of significance.

Next, let’s run-down the different dining offerings throughout the day at Kilimanjaro Club… 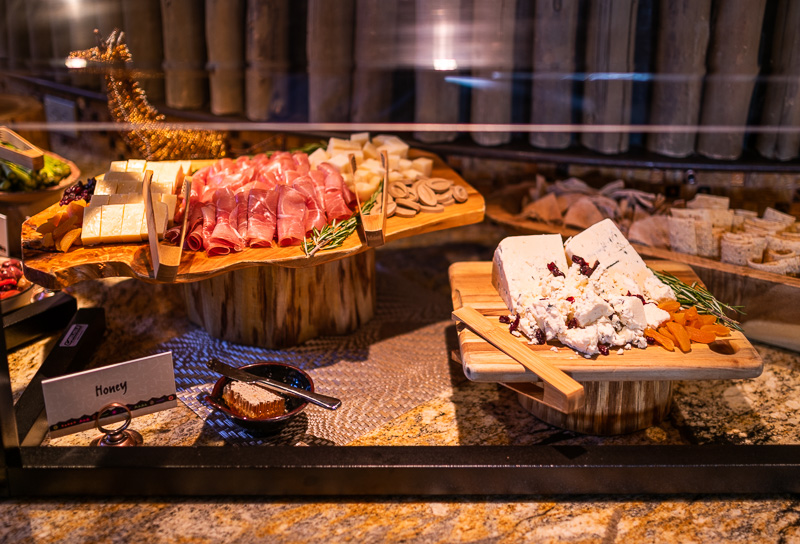 We’ll start with Kisikusiku, or Twilight Offerings, which are served from 5 p.m. to 7 p.m.

This is essentially dinner, and it’s pretty comparable to what we enjoyed when last staying at Kilimanjaro Club. At all Walt Disney World Club Level lounges, this is the most substantive spread of the day. There are usually meats & cheeses, fruits & vegetables, breads, and a couple of hot dishes that could be treated as entrees. 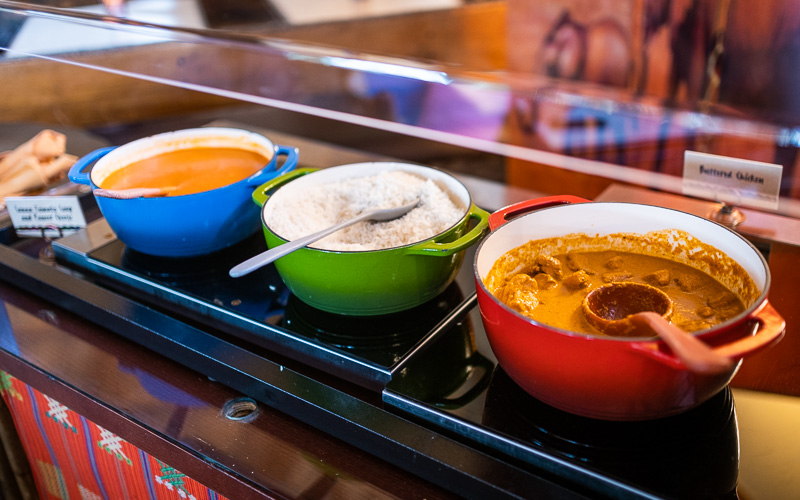 For the first night of Kilimanjaro Club’s return, the “entrees” were Buttered Chicken and Tomato & Paneer Cheese Soup from Sanaa.

These will rotate, so future options could be better or worse. It’d be difficult to top this dynamic duo, though. 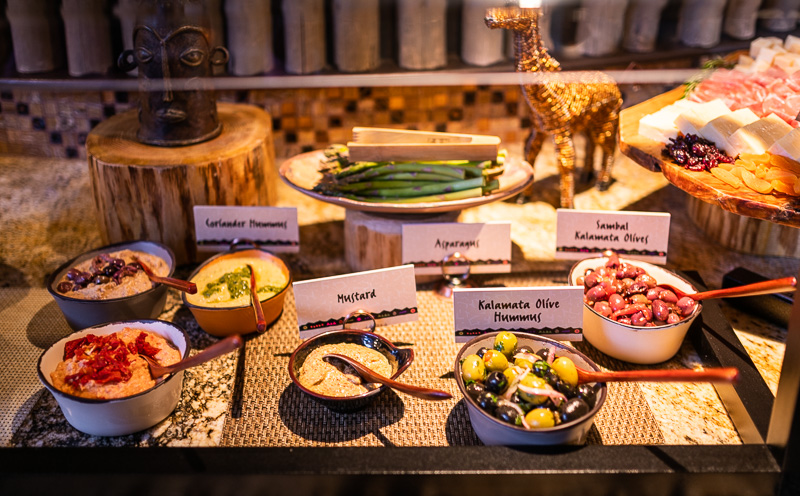 The dinner spread also included a variety of hummus, olives, asparagus, and breads.

Below there’s some salads, vegetables, and dips. 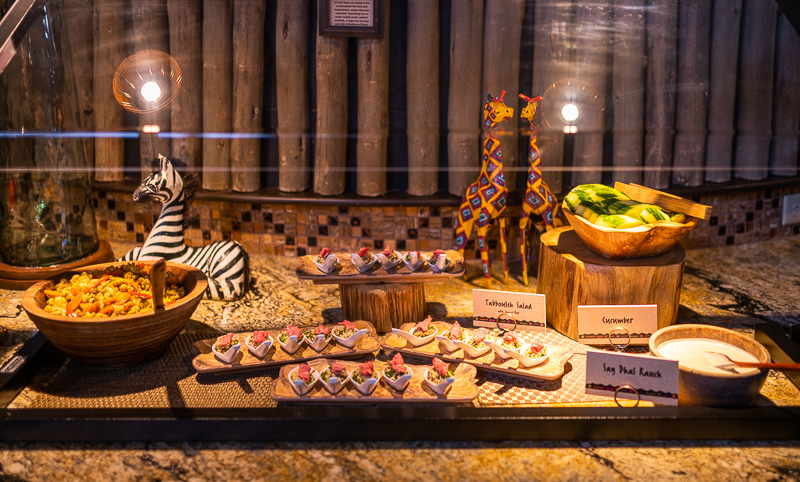 All in all, dinner at Kilimanjaro Club was as good or perhaps slightly better than before.

There’s a lot of variance based upon the hot options being served, but we were pleased. 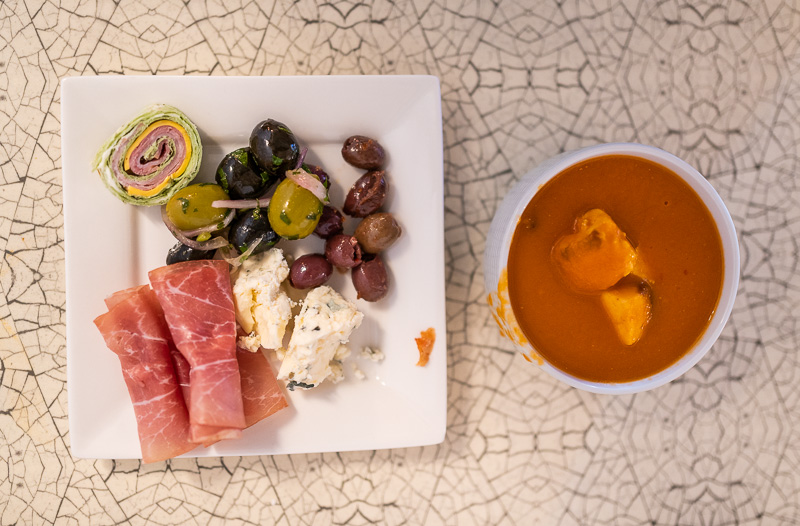 My concern going in was that everything would be pre-packaged or small individual serving cups and that was not the case.

It was actually a surprise that the butter chicken and soup were self-service with fairly large bowls provided. Some Club Level lounges try to subtly “discourage” guests from making a dinner out of the “twilight offerings,” but that didn’t seem to be the case at Jambo House. 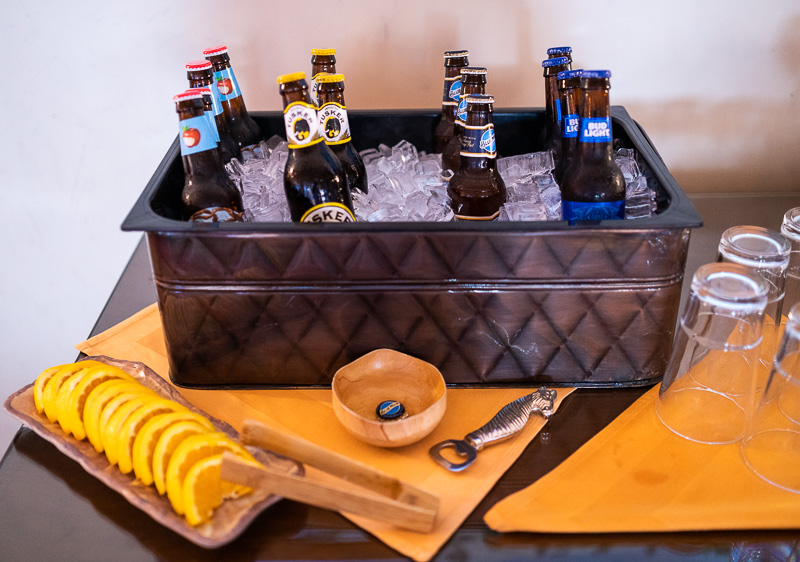 As before, unlimited alcohol is one of the big selling points of the Club Level lounges at Walt Disney World.

Kilimanjaro Club had beer out in the afternoon and evening, with other drinks available upon request. 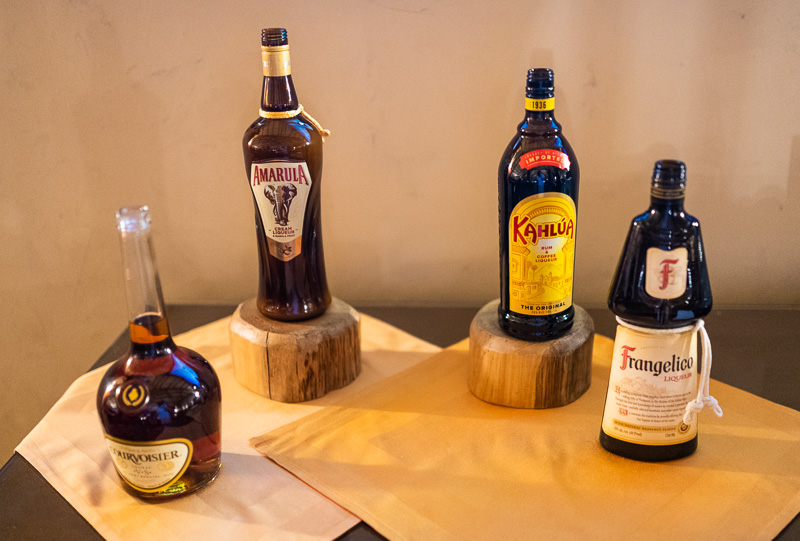 The hard alcohol comes out for Rehema, which is the “Evening Indulgences” from 8 p.m. to 10 p.m.

In the past, we’ve been underwhelmed by Kilimanjaro Club’s dessert spread. 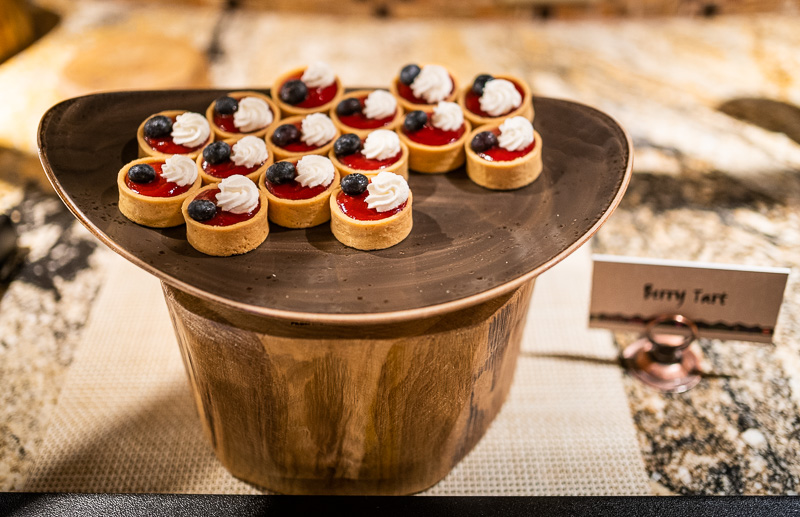 That continued with this stay at Jambo House.

It wasn’t that the options were bad, there were just very few unique items and none had a wow-factor. 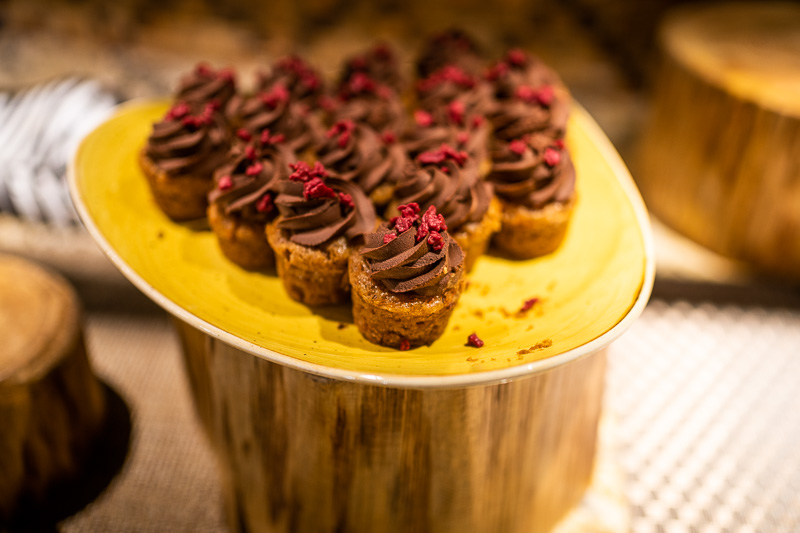 The two desserts pictured above were both good, but everything else was pretty ordinary.

I’ve heard tall tales about unlimited Zebra Domes on the dessert spread at Kilimanjaro Club, but I’ve never seen those majestic creatures with my own eyes this far from their native habitat downstairs. Now that would be a dessert with wow-factor! 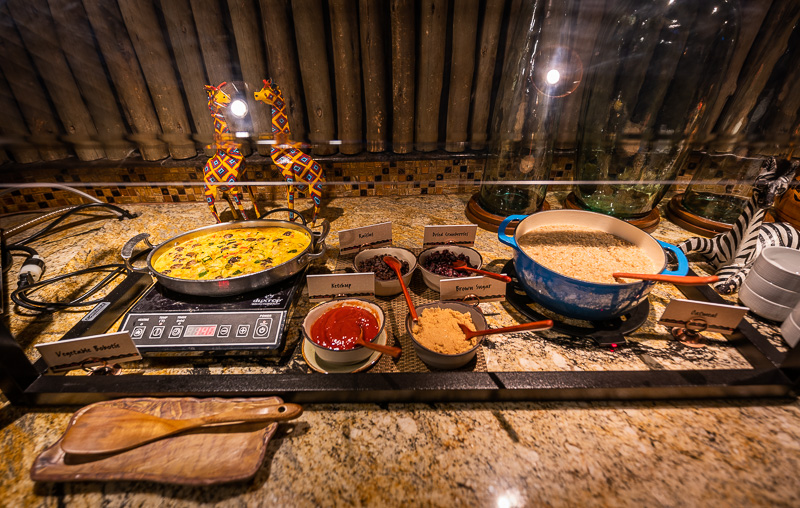 The biggest substantive change at Kilimanjaro Club came during Miamko, or “Adventurous Awakenings,” served from 7 a.m. to 10:30 a.m.

In the past, we’ve found breakfast to be incredibly underwhelming here and at most Club Level lounges throughout Walt Disney World.

We’ve expressed disappointment with this in past Club Level reviews. Breakfast is the meal most guests could take advantage of the lounge, and it’s perpetually the weakest. It’s also not even remotely on par with commensurately-priced real world concierge lounges.

Even prior to Walt Disney World’s shutdown, we had noticed the tides starting to turn on this. Chronos Club at Gran Destino Tower debuted with a fantastic breakfast spread, and other locations had started adding a hot item or two. So it’s entirely possible this is an improvement Kilimanjaro Club made pre-closure, and we just never saw it for ourselves. 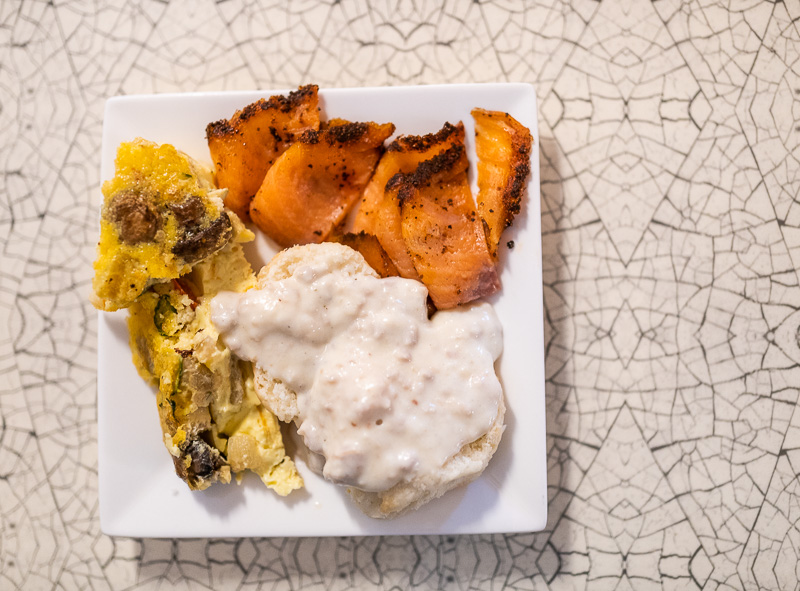 Regardless, breakfast was fantastic.

Hot items included biscuits & gravy, vegetable bobotie, and steel-cut oatmeal. There were also a number of delicious cold items, including smoked salmon, deli meats, hard-boiled eggs, muffins & croissants, and fruit. I wouldn’t go as far as to say Kilimanjaro Club surpasses Chronos Club for breakfast, but the latter now has some competition. 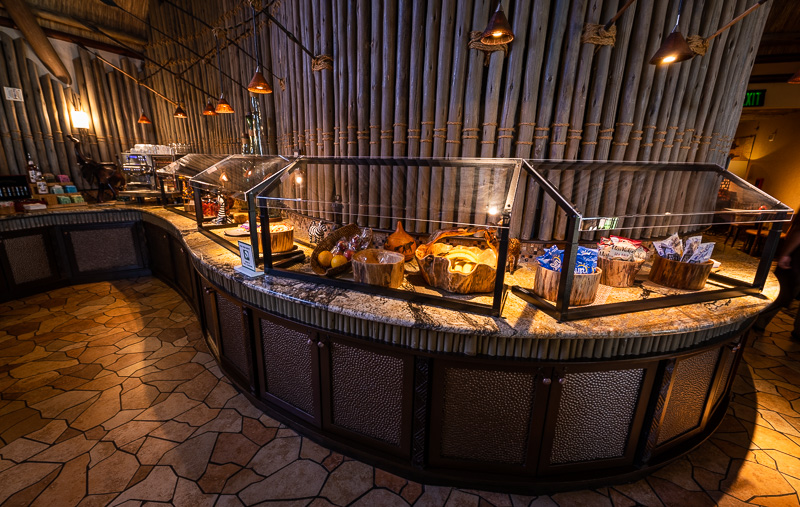 Unfortunately, the better breakfast came at the expensive of Vitafunio, or the “Safari Snacks” served from 11:30 am until 4:30 pm.

These were entirely grab and go items–bags of chips, fruits, those little PB&J sandwiches without crust for some reason, and a few items I’m probably forgetting. You’d be very hard pressed to make a lunch out of this. Notably, this is also the direction Chronos Club went with its midday spread. 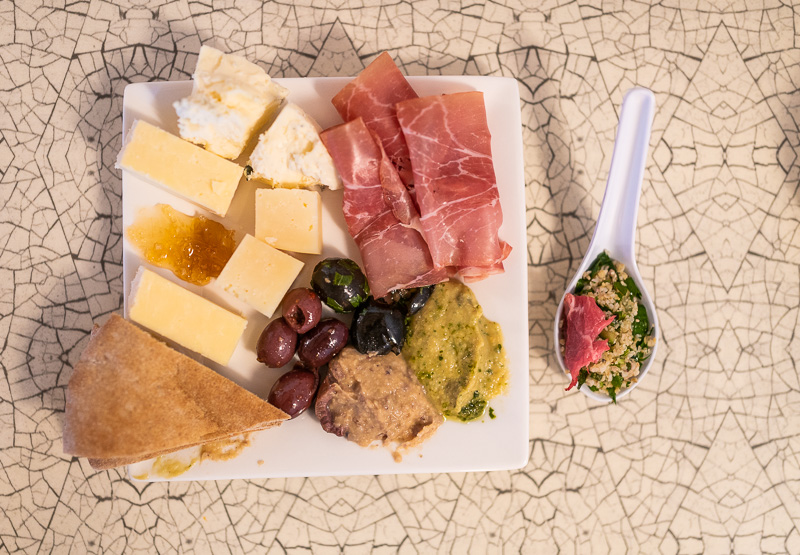 Doing more for breakfast and less for lunch makes complete sense from a “guest demand” perspective. It also makes sense in terms of behavior–most people are at the parks during midday hours.

For the amount Club Level costs, it’d be nice if every food service lineup were top notch, but this is nevertheless perfectly fine. Guests who are truly thrifty can make do by planning in advance and throwing some bread and meats in the fridge in their room and making a midday sandwich. Not that I’d know anything about that. 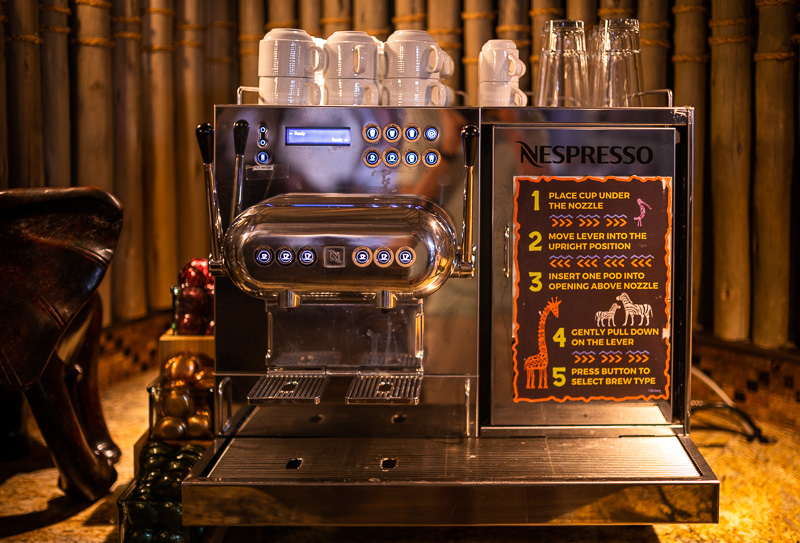 Kilimanjaro Club also has a Nespresso machine for use throughout the day. We’re total suckers for Nespresso and are currently on an extended caffeine buzz. The coming crash is going to be brutal.

Finally, here’s a video of the entire dinner service at Kilimanjaro Club to give you an idea of how this all looks laid out together:

This isn’t a standalone review of Kilimanjaro Club, which we’ve already done and is more or less consistent with this save for the various little changes. However, one thing that bears mentioning is the value proposition of Club Level at Jambo House.  All Club Level rooms from the hotel inventory are Savanna Views, so the nightly cost for lounge access is right around $100. Most other Club Levels are significantly more of a premium–aside from the aforementioned Chronos Club, which is another favorite value for money pick.

Of course, we didn’t pay cash for this stay at Animal Kingdom Lodge – Jambo House, instead using 22 DVC points. It’s the only Club Level at Walt Disney World offering this, and going this route makes it the cheapest (by far) Club Level option. The “sacrifice” comes in terms of the view, which is either of rooftops and the pool (what we had) or a weak Savanna View. That’s probably why Walt Disney World made these DVC rooms! 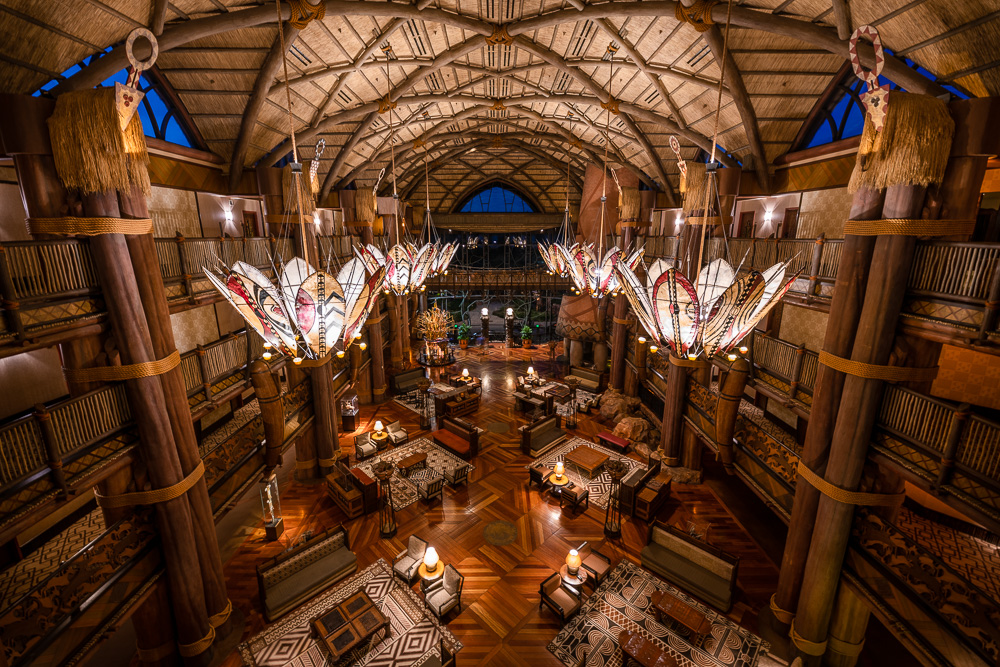 Overall, we really enjoyed our experience at the newly-reopened Kilimanjaro Club. We’ve been anxiously awaiting the return of Club Level, which has become one of our favorite splurges as Walt Disney World locals. Booking this a no-brainer with Disney Vacation Club points given the normal difficulty of scoring reservations here, so it was nice to get our “fix” in a comparatively affordable way. We got lucky with it all working out, which is still somewhat surprising.

Moreover, we were incredibly pleased that Walt Disney World didn’t dilute or reduce the quality of Club Level under the guise of health safety. Animal Kingdom Lodge – Jambo House is now two for two on that front, bringing back both Boma and Kilimanjaro Club in “as good as ever” form. That might seem unremarkable or not worthy of praise, and given the prices charged, it isn’t. However, considering what has happened elsewhere around Walt Disney World, it is worth mentioning–and worthy of a sigh of relief. Here’s hoping that when the other lounges return, the story is the same. Club Level has made some incremental improvements at Walt Disney World over the last several years, and it would be a shame to see those undone.

Are you excited for the return of Club Level lounges at Walt Disney World? Have you likewise been anxiously awaiting this reopening news? Happy to see the presentation and quality haven’t been diluted under the pretense of health safety, or wish more modifications were made? Have you done Kilimanjaro Club at Animal Kingdom Lodge? Noticed improvements in the quality of Club Levels at Walt Disney World even pre-closure? Any questions we can help you answer? Hearing your feedback—even when you disagree with us—is both interesting to us and helpful to other readers, so please share your thoughts below in the comments!