The Sigma 50-500mm f/4.5-6.3 APO DG OS HSM lens is a telephoto superzoom with image stabilization and 10x zoom, which should make it a very versatile lens. I recently had the chance to test and review this lens out for a few days at Walt Disney World. On paper, it sounds like a great lens. Incredible range, image stabilization, and a very reasonable price for a 500mm lens. In fact, it’s over $1,000 cheaper than the Nikon alternative, the 80-400mm VR, and that lens offers significantly less range.

In actuality, unfortunately, the lens is not as great as it would seem. Sure, on full frame you do have a zoom range that goes from normal field of view to extreme zoom (roughly 10x of zoom) with optical stabilization, but that’s not the whole story. In my review of the Sigma 35mm f/1.4, I praised that lens as a “King Kong of lenses,” which doesn’t make much sense, but the basic implication was that the Sigma 35mm was just as awesome as King Kong. I’m also going to call the Sigma 50-500mm the King Kong of lenses, but this time, in a bad way. Both are big and sorta clumsy.

Actually, that’s a bit harsh. The “Bigma” nickname that this lens has garnered is a pretty affectionate moniker from its many fans, and it’s more likely that the lens just isn’t for me. I’m used to regularly using the large Nikon 70-200mm f/2.8 VR lens, and don’t bat an eye when using it in public. The Sigma 50-500mm was a different story for me. Not only is it larger than a 70-200mm, but the zooming is not accomplished internally, so it becomes really long once you start zooming. I don’t know why I didn’t think to take a photo of this, but luckily our friends over at Digital Photography School have one at the top of their review.

The size coupled with the weight make this lens very difficult to use handheld, but that’s par for the course with a lens exceeding 300mm, it seems. The bigger concern for me was the attention the lens drew. In a normal tourist situation, using this lens will make you feel really awkward, unless that sort of thing doesn’t bother you. Because of that, I used this lens very little over the course of the trip, and when I did, I tried to grab shots quickly so I didn’t draw unwanted attention, which led to some clumsy composition. I think many non-niche travel photographers are going to feel the same way when using it. In theory it’s a great lens, but a lens that you’re not going to want to use isn’t that great of a lens.

The good news is that when I did use the lens, I was very impressed with the results. I was expecting a lot of image quality compromises given the zoom range of the lens and it having image stabilization, but the lens was surprisingly sharp.

Auto-focus on it wasn’t lightning fast like some of my other lenses, but for a zoom like this, it was more than acceptable. Auto-focus was also accurate, and I didn’t have any issues with front or back focus, which I was happy to find. As mentioned, it’s a very sharp lens. Compression also makes it easy to separate your subject from your background, especially once you zoom past 100mm. The Sigma 50-500mm’s other strength is its colors, which are excellent right out of the camera.

As far as weaknesses go, the lens doesn’t produce images that ‘pop’ right out of the camera. You’re going to want to increase contrast or do a curves adjustment, but the images are far from flat. They just aren’t as gorgeous straight out of camera as a flagship prime. Nor should you expect them to be–this is a compromise in getting a telephoto superzoom. There is also distortion, which (again) should be expected with a superzoom.

Compression and the range in general opened up a lot of creative possibilities I wouldn’t have otherwise considered. For example, I love the stacked look of this shot with Space Mountain looming right behind the TTA with palms in the foreground (talk about a quintessential look at Tomorrowland!), and this type of shot is going to be almost impossible with a normal lens. So there are a lot of creative possibilities here thanks to the zoom and compression.

Due to the lens’ size and weight, optical stabilization is hugely important here. It makes the difference between using a tripod and going handheld in some situations. Although it’s advisable to use a tripod for the sharpest shots, I wanted to push the lens to its limits to see what could be done. The lens didn’t disappoint, allowing me to capture the photo below of Cinderella Castle handheld…and at night! The optical stabilization performs as well here as Nikon VR II, which is saying something. 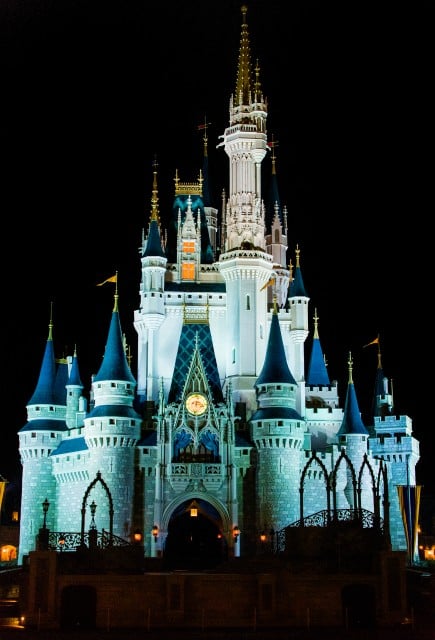 As far as build quality and design go, the lens is incredibly well built, reminding me a lot of my old Sigma 30mm f/1.4, which was also part of the EX line. Both that lens and this one feel like they’re built like tanks. I’m not wild about the

I think there are some great uses for the Sigma 50-500mm out there, and its quality is exceptional for what it does and its price range, but it’s just not a lens for me for normal travel. Using the lens was a good lesson for me that I don’t need a lens like this with a lot of coverage on the telephoto end “just because,” which was essentially my main justification for wanting to use it. Actually, I think that’s probably the main market for this lens–people who don’t necessarily need a telephoto superzoom, but think the lens looks appealing on paper, so they go for it. I would caution anyone in similar circumstances to try the lens out before making the jump, because without a specific purpose in mind for this lens, you might find yourself using it very little. The lens might have appeal to niche photographers, such as wildlife photographers, aviation photographers, or sports photographers (none of which are specialties of mine), but it seems like those photographers are going to want a faster lens for their niche.

The plus side is that if you do have a great use for this lens in mind, you’ll be rewarded with a lens that performs well and delivers solid results at a relatively inexpensive price. In that regard, anyone considering this lens and knowing that its features will suit their needs should definitely jump at it, as its quality does not disappoint.