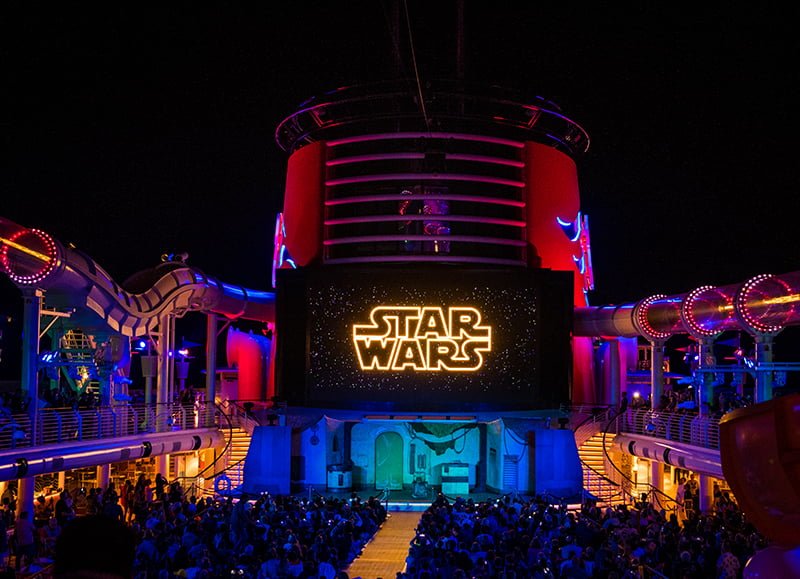 For starters, Disney Cruise Line has just announced the 2022 dates that will feature Star Wars Day at Sea aboard the Disney Fantasy:

Note that all of these itineraries are aboard the Disney Fantasy and depart from Port Canaveral, Florida. They’re subject to all current health safety protocol, both pre-departure and on-board the ships.

Before we get to editorializing, let’s cover what was offered during the Star Wars Day at Sea on our cruise. This ‘special event’ offers a full day of Star Wars activities including guest presenters, over a dozen meet & greet characters, live shows, costume celebrations, movie screenings, family trivia, a ship-wide scavenger hunt, youth club activities with BB-8, themed dinner menus, and special merchandise offerings.

To be blunt, Star Wars Day at Sea played zero role in us booking this cruise. We’re not fans of Pirate Night or Frozen Fun, and expected this to be more of the same. In some ways, it was–with Star Wars Day at Sea following a similar formula as those offerings, particularly Frozen Fun. However, this was more substantive and just flat out better. 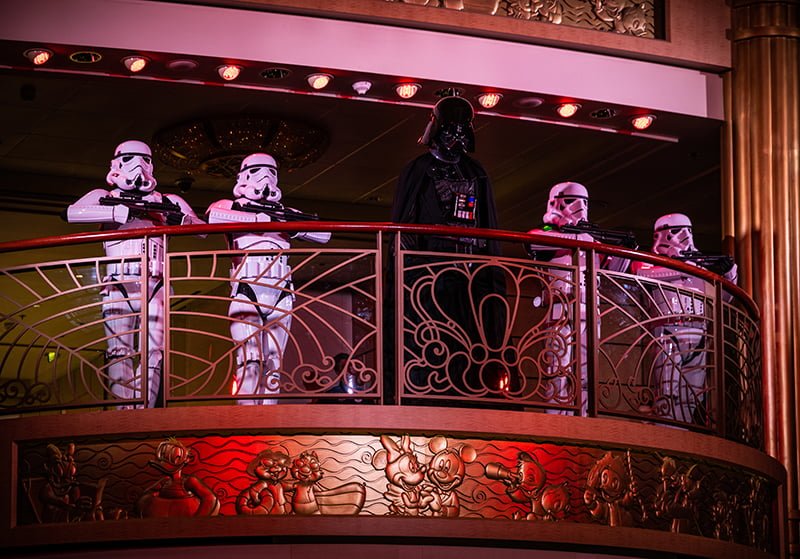 Star Wars Day at Sea actually began the night before the festivities began with Darth Vader ‘taking over’ the ship in a cute little show. This was not on the cruise Navigator, but everyone’s server told them about the “surprise” at dinner.

Most importantly, the music aboard the ship changed from the normal animated movie soundtracks to the scores from Star Wars, which did a great job in setting the tone. 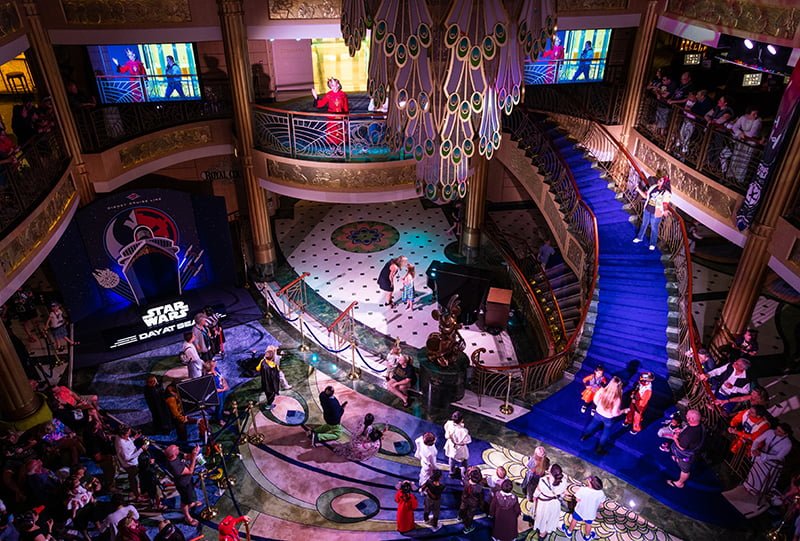 This also kicked off sales of Star Wars costumes in earnest. It always surprises me how many people buy pirates garb for that underwhelming themed night, but those merchandise sales pale in comparison to the Star Wars items flying off the gift shop shelves that evening. It wouldn’t surprise me if Disney Cruise Line more than makes up the cost of the themed day in costume and merchandise sales.

These would later be worn during the evening’s costume contest. Some of these were surprisingly elaborate (one dude had full Darth Maul face makeup!), but the highlight was probably hearing kids interviewed about their costumes, and them giving amusing responses. 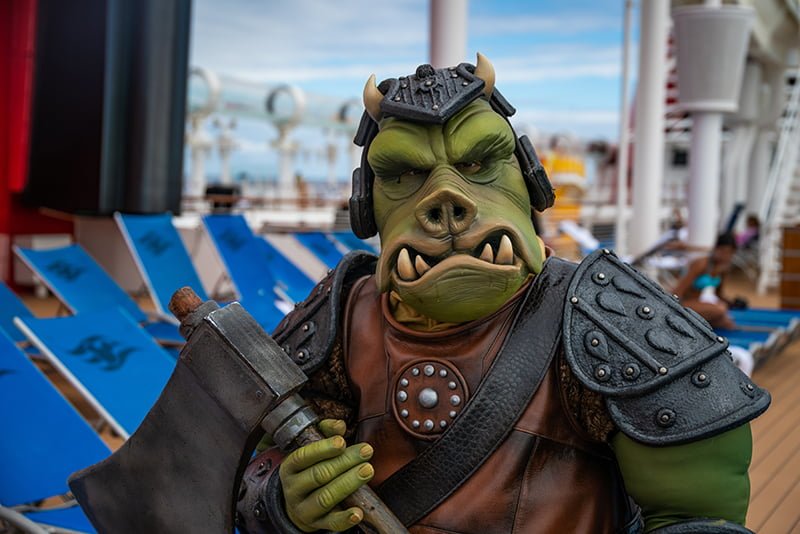 Throughout the day that followed, a range of characters appeared on the top deck and atrium of the Disney Fantasy.

Disney Cruise Line advertises “over a dozen Star Wars Characters–including Chewbacca, R2-D2, C-3PO and Darth Vader” at Star Wars Day at Sea, and we were pleased to see some deeper cuts in addition to those high profile characters. 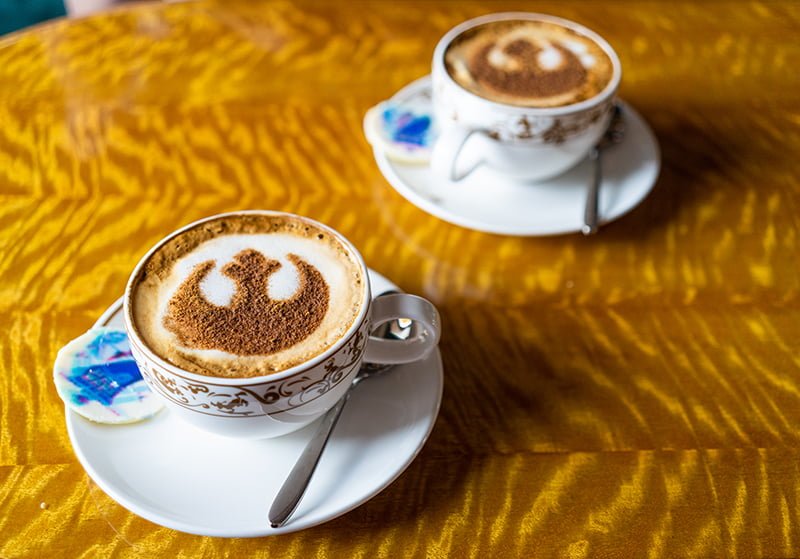 As always, Stormtroopers were one of the biggest highlights. Their ability to deliver serious yet comedic moments and fun interactions is what makes them one of the best free-roaming characters in the parks and aboard the cruise ships.

We saw them throughout the day both in the atrium and in the pool areas, and the interactions were always fun. Unfortunately, I never once had my camera or phone on me while they were out and about, so here’s a picture of my cappuccino from Vista Cafe, instead. 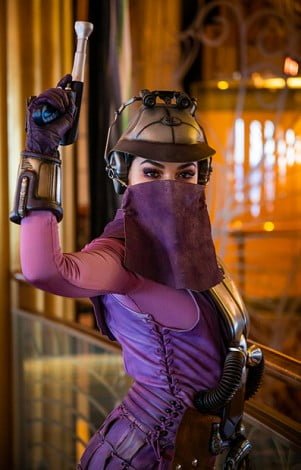 The seats around Vista Cafe were perfect for people-watching and spontaneous character interactions. We saw Zam Wesell a number of times, as well as some others.

It was amusing to guests notice these characters wandering around; you could almost see the wheels turning as people tried to ascertain whether they were other guests in costume or character performers. 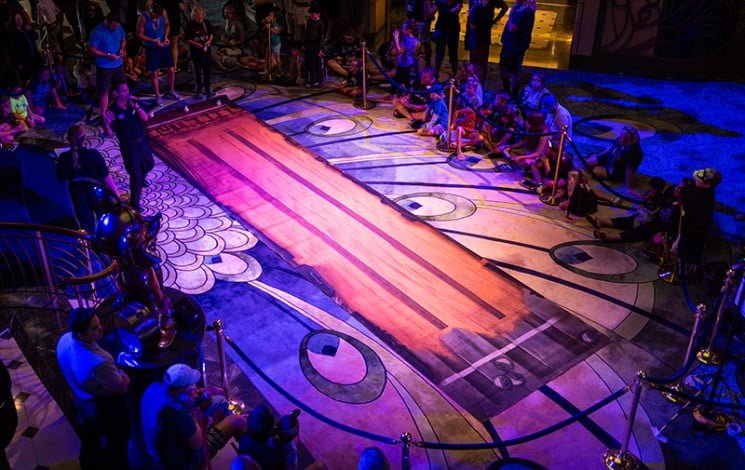 We also watched a number of BB-8 races from up by Vista Cafe. 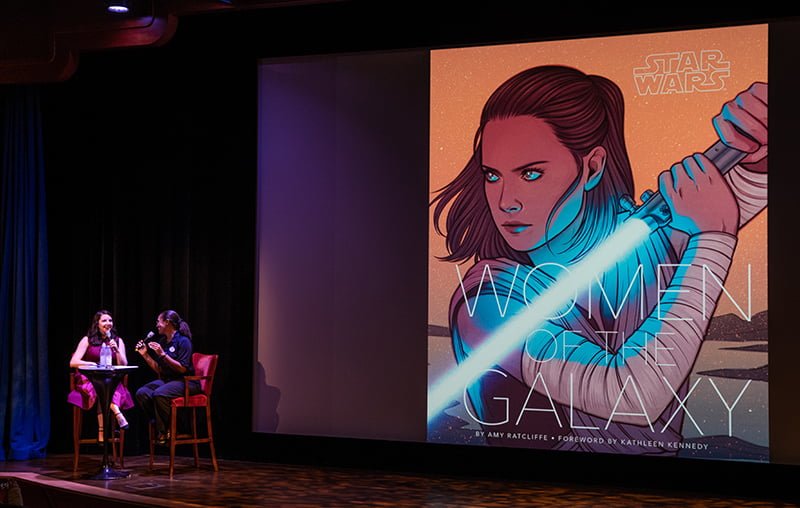 We are total suckers for guest lecturers aboard Disney Cruise Line (we’d love to see far more of these), and Star Wars Day at Sea brought Amy Ratcliffe, author of Women of the Galaxy, among other things.

She detailed her path from fan to author, and also highlighted the strong women of the Star Wars universe. Her Q&A afterwards was interesting, and her responses to a number of questions, including one about toxicity in fandom, particularly illuminating…and diplomatic. 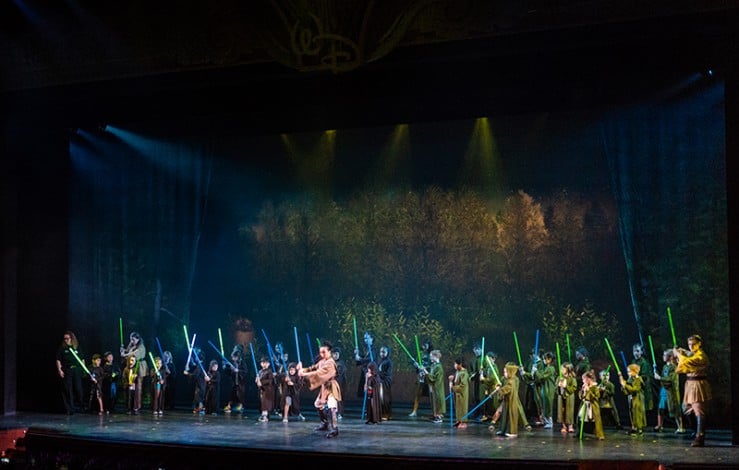 Jedi Training Academy: Trials of the Temple was held in the Walt Disney Theatre, another popular offering for families with kids.

Speaking of the theatre(s), throughout the cruise, late night showings of Star Wars movies were shown. I hadn’t seen any of the original trilogy on the big screen since the late 1990s, so it was very cool to revisit these in Buena Vista Theatre. 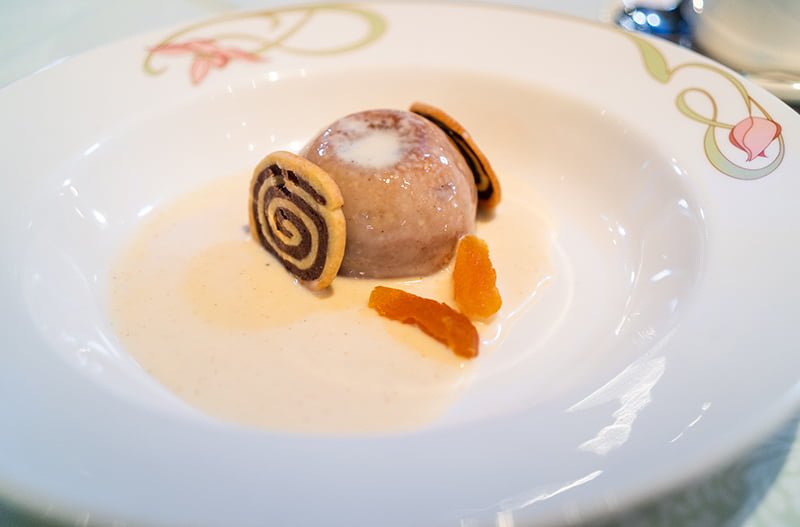 The Star Wars “Voyage Through the Galaxy” dinner menu had items named after things from the universe, but most were not overtly “Star Wars.” Desserts were the one exception to this.

In general, this was probably one of the better dinner menus we had during the entire cruise. 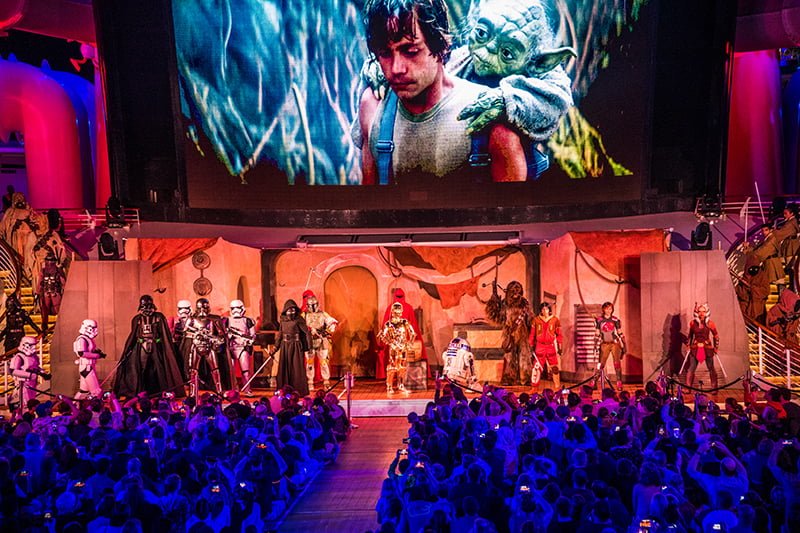 Our Star Wars Day at Sea ended with the “Summon the Force” stage show that features a litany of characters engaging in the saga’s most iconic moments, and culminates in a fireworks show (the second of the cruise). In some of our Disney Cruise Line reports, I’ve been pretty critical of shows and deck parties like this one.

Thankfully, Summon the Force was not awful. It was a pretty straightforward montage show with great visuals and a sense of tension–it was fun and reasonably well-presented. “Not awful” isn’t exactly effusive praise, but Summon the Force was lightyears better than the other deck party shows we’ve seen aboard Disney Cruise Line, almost all of which talk down to audiences and aren’t aimed at anyone over the age of 6. 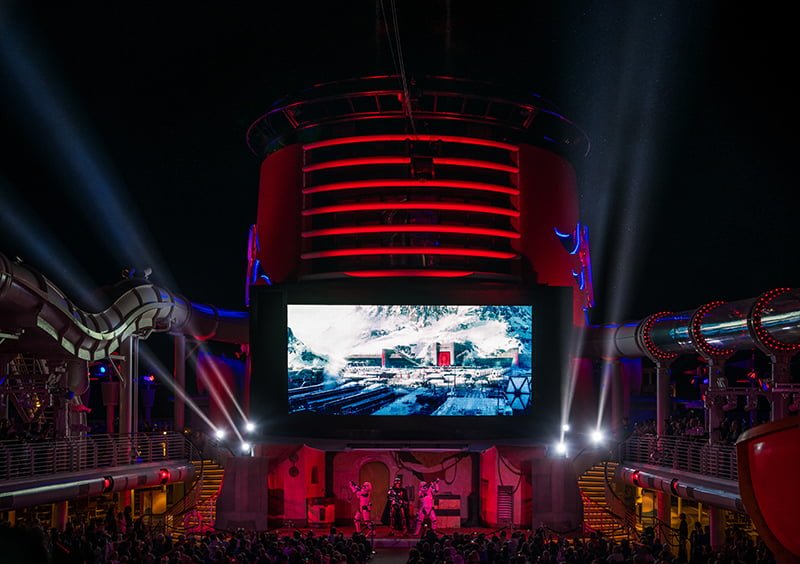 One of the reasons Summon the Force works well is because it strikes the same tone at the Star Wars films, and resonates emotionally thanks to the soundtrack.

It’s exactly what you’d expect, which is a good thing. This is especially noticeable given how the Frozen and Pirates shows deviating from what gives those films heart and appeal. In general, this is why Star Wars Day at Sea succeeds–because it hits the same emotional notes as the films, and presents offerings of substance that are fairly satisfying for Star Wars fans. 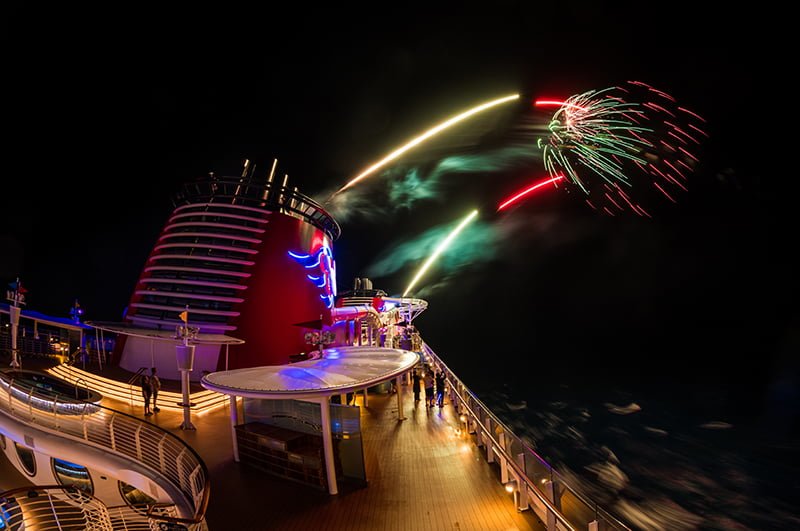 On a related note, I’m not sure where to head with our Disney Cruise Line coverage next. Whenever we get off a cruise, I’m really hyped about it, and jot down a ton of post ideas. Without fail, something else comes up, the hype fades a bit, and my plans change.

Totally out of the question is a trip report for this cruise, as it was a pretty laid back experience and I’m not sure there’s much value in “reporting” that we did nothing over and over. Circling back and doing a cruise report from our Alaska cruise is within the realm of possibilities, as are more restaurant reviews (although do those really serve much of a purpose?), a review of this itinerary, and ship reviews or comparisons. If you have any feedback about what you’d like or don’t care to see, we’re all ears!

Planning to set sail aboard one of the Disney Cruise Line ships? Read our comprehensive Disney Cruise Line Guide to prepare for your trip, plan entertainment and other activities, and learn what to expect from your Disney cruise! If you want personalized recommendations for Disney Cruise Line itineraries, ships, and more, click here to get a cruise quote from a no-fee Authorized Disney Vacation Planner. They can find you all of the current discounts, and help you plan the details of your cruise!

Have you experienced Star Wars Day at Sea? Do you agree or disagree with our review? Think we’re too hard on the other themed days and deck parties? Any questions? Hearing feedback about your experiences is both interesting to us and helpful to other readers, so please share your thoughts below in the comments!