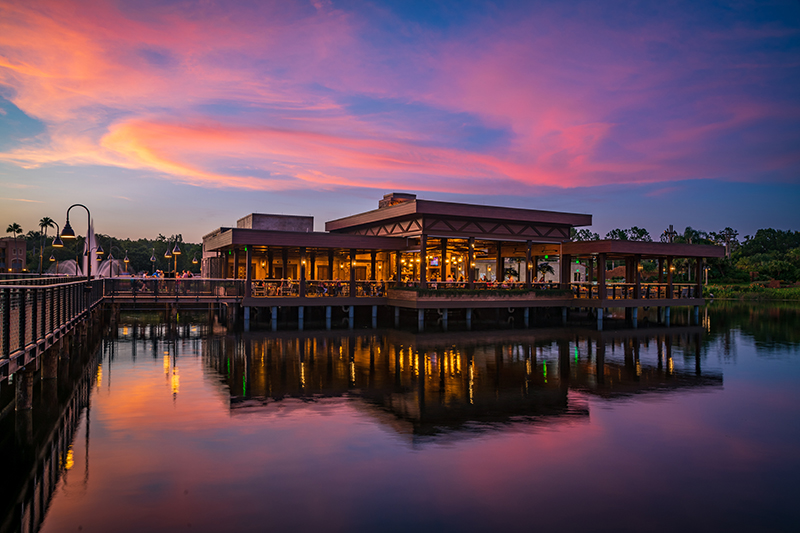 Three Bridges Bar & Grill at Villa del Lago is an open-air, over the water restaurant at Disney’s Coronado Springs Resort. In this Walt Disney World dining review, we’ll share food photos, thoughts on the menu, what we recommend ordering, and whether Three Bridges is worth your time. (Updated May 24, 2022.)

We won’t bury the lede: Three Bridges Bar & Grill at Villa del Lago has quickly become one of our favorite hidden gem restaurants at Walt Disney World. It offers great food at fair prices and has a delightful open-air atmosphere. It’s not the most-heavily themed or memorable dining experience you’ll have at Walt Disney World, but it’s a great way to decompress after a long day in the parks.

To that point, if you’re staying at Gran Destino Tower, Coronado Springs Resort’s other buildings, or elsewhere but have a car, Three Bridges is a great option after the parks close. It’s open late–usually until midnight–making it a great stop for a late night meal or nightcap.

When Three Bridges Bar & Grill at Villa del Lago first opened, one of the main selling points (for us) was enjoying views of the nighttime spectaculars at both EPCOT and Disney’s Hollywood Studios. Along with Toledo – Tapas, Steak & Seafood and Topolino’s Terrace (the new rooftop restaurants at Gran Destino Tower and Disney’s Riviera Resort, respectively) this was one of three new restaurants boasting great fireworks views.

Three Bridges is the most laid back and cheapest of the new choices for views of the fireworks. It’s also the only one without an elevated, rooftop view. As they say, “you get what you pay for.” In this case, you’re actually getting a lot for your money at Three Bridges Bar & Grill! 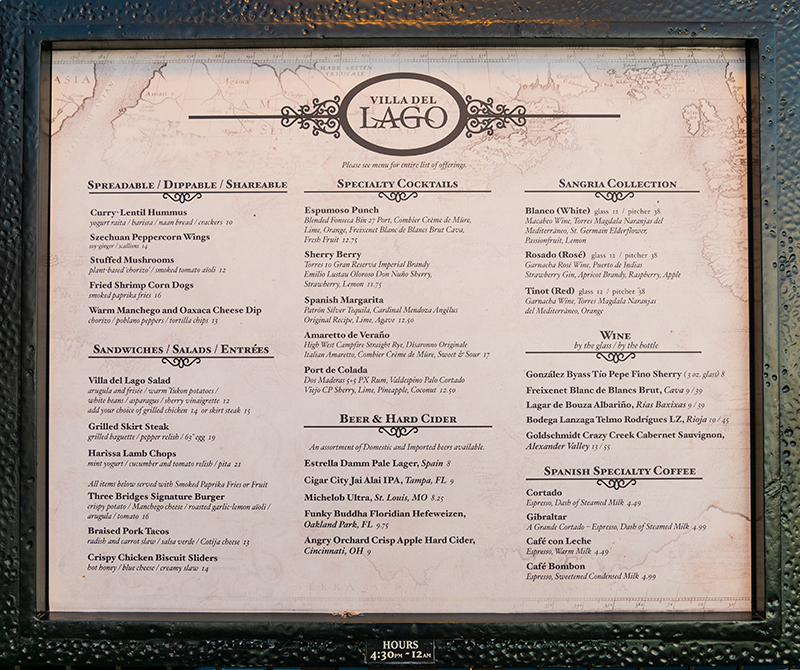 Here’s a look at the menu. Prices are surprisingly fair for Walt Disney World.

The cuisine changes at Three Bridges with some degree of regularity, but everything reviewed here is a “menu mainstay” that is almost always available. With that said, check out the current menu before dining at Three Bridges to make sure it’s for you. 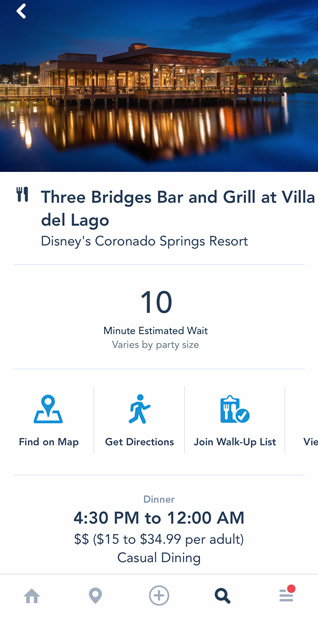 One big thing to know before you go is that Three Bridges Bar & Grill uses the Walk-Up Waitlist feature in the My Disney Experience app for same-day table availability. It does not offer Advance Dining Reservations. Usually, this is not a problem. We’ve typically waited about 15-30 minutes for a table, regardless of season, weather, or time.

However, if there’s a convention or group event happening at Coronado Springs, all bets are off. 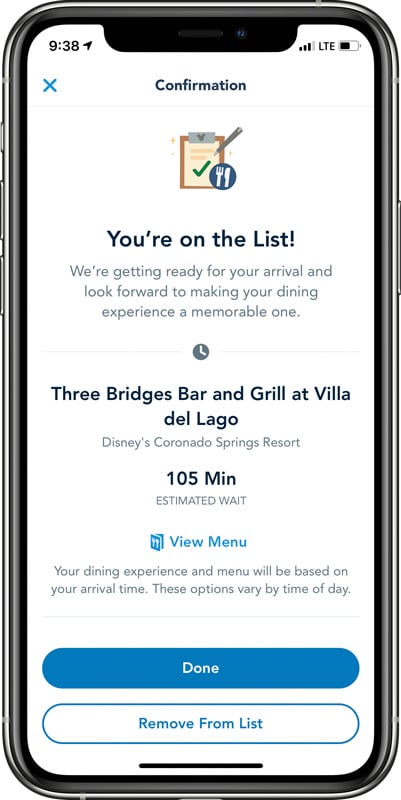 We were recently quoted an estimated wait time of 105 minutes for Three Bridges Bar & Grill at 9:38 pm. We ended up being seated a little over an hour later at 10:35 pm. Better than the estimate, but still a lengthy wait as compared to normal. (We were staying at Gran Destino, so not a huge deal to us that we had to wait.)

On a related note, typically Coronado Springs is more lax about allowing guests without Advance Dining Reservations to park at the hotel than the Magic Kingdom and EPCOT-area resorts. It’s not a sure thing, but it’s usually not an issue. 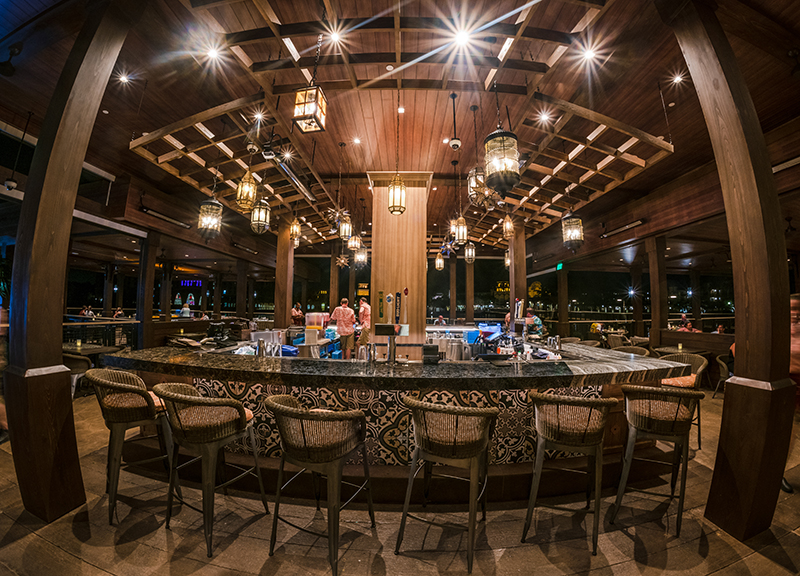 The restaurant is located at Villa del Lago, which Walt Disney World describes as a “mirage-like island of one-story buildings.” It’s meant to evoke a bygone era in which intersecting travelers shared epic tales over food and drink.
Per the backstory, adventure seekers arrived at this crossroads in search of the fabled Seven Cities of Gold–or a romantic lakefront dinner. 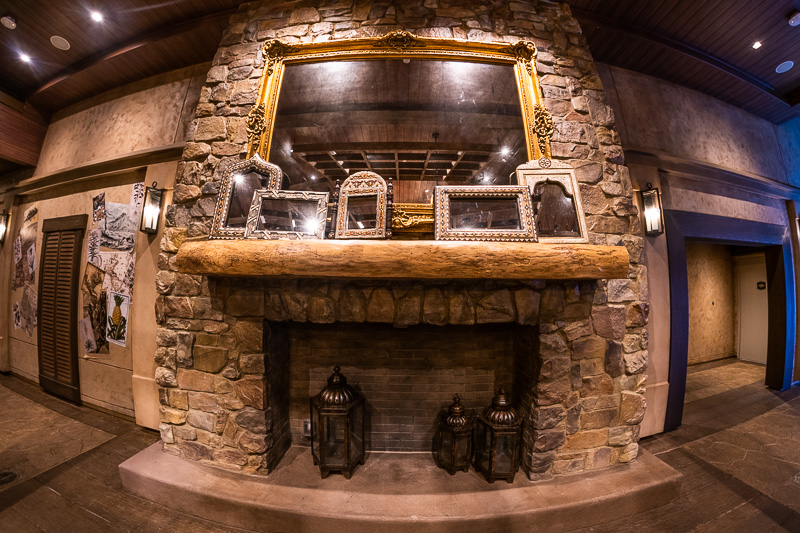 Nevertheless, there’s a bunch of Villa del Lago merchandise in the gift shop at Coronado Springs. All of the recent resort product lines are neat, but this feels like an even deeper cut–hats, shirts, and cups for the fictional backstory location of a restaurant. 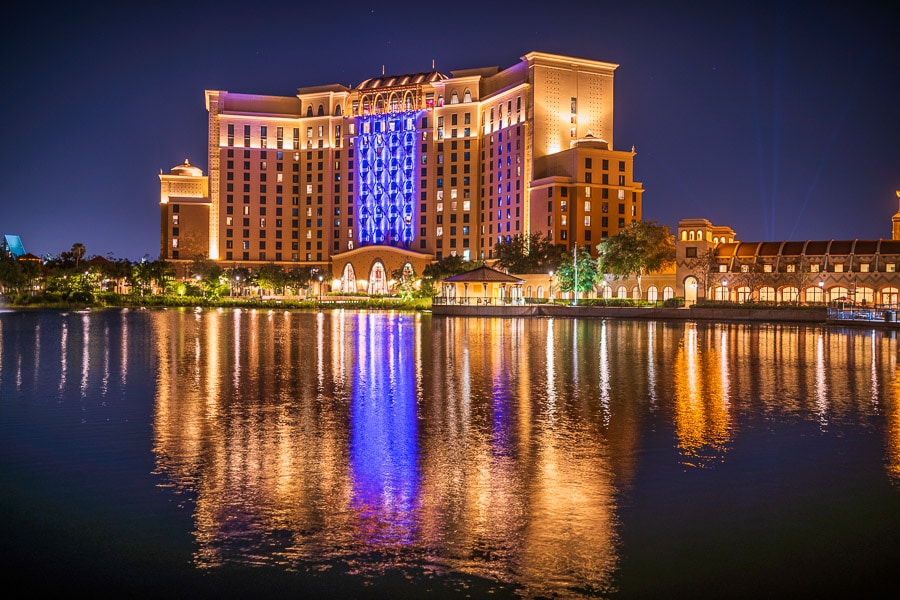 In any case, Three Bridges Bar & Grill opts for a less approach to theme. It’s mostly the open air views that are the highlight, with perspectives of Gran Destino and the outlying buildings.

There are also little touches like the light fixtures, posters, random mirrors, and so forth give the interior mild visual interest. Three Bridges is not going to win any awards for themed design, but the al fresco atmosphere is delightful. It’s also chic without being obnoxious (save perhaps for the frames over the faux fireplace). 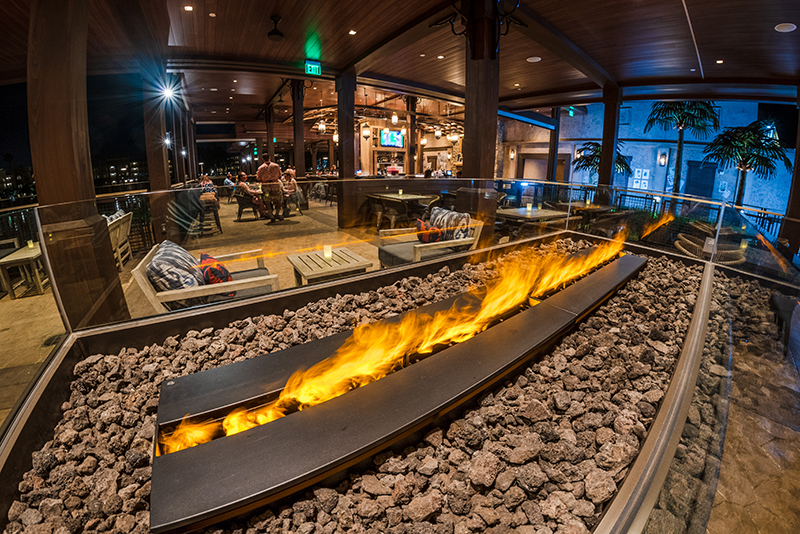 Being drawn to ‘shiny objects’, I was enamored with this (also faux) fire table.

It’s essentially illuminated mist, but it has that same entrancing quality as fire. 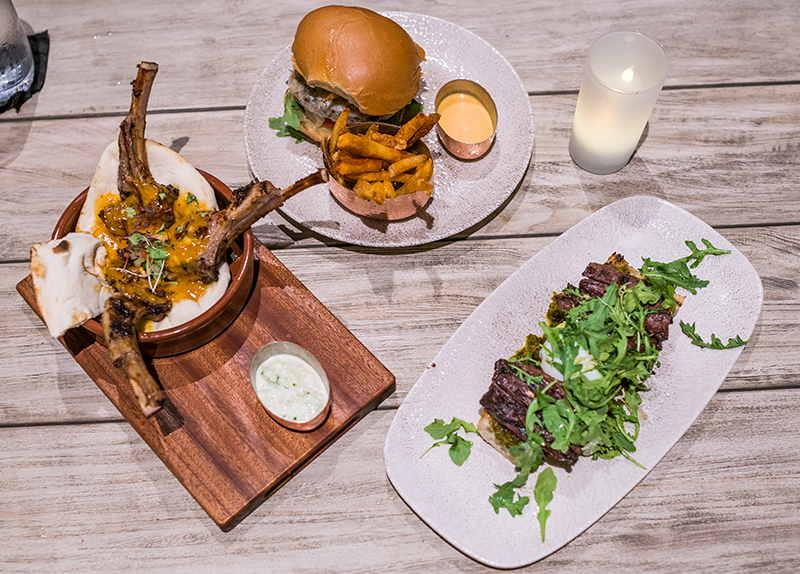 Be mindful of where you sit at Three Bridges. Some tables–even ones pretty far from the bar–are designated as ‘bar service only.’

We haven’t experienced any woes with service at Three Bridges ourselves, but have observed and talked to others who have had issues. 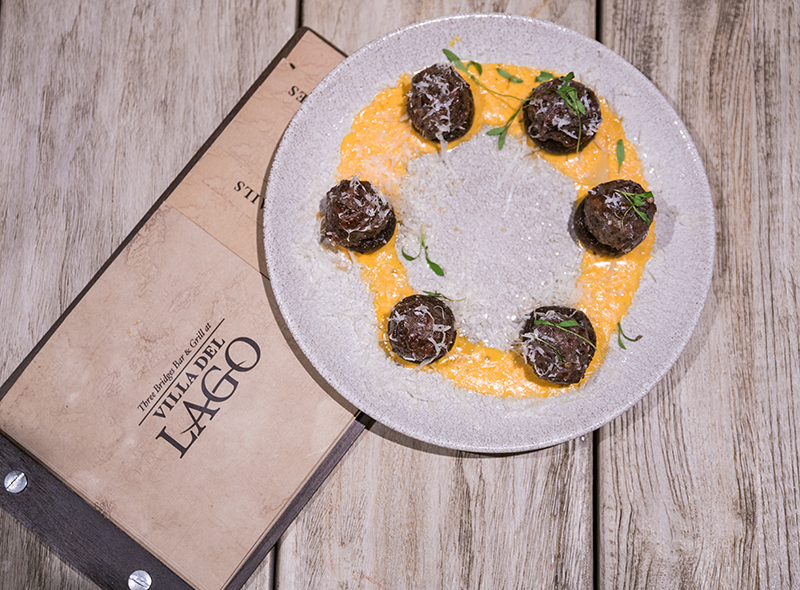 First up, the Stuffed Mushrooms with plant-based chorizo and smoked tomato aioli.

These are fantastic. They’re definitely more like ‘meatballs’ (with mushrooms underneath) than stuffed mushrooms, but there’s sufficient flavor from both. The aioli is a perfect enhancement to the savory chorizo, which you wouldn’t guess is plant-based if the menu didn’t say so. 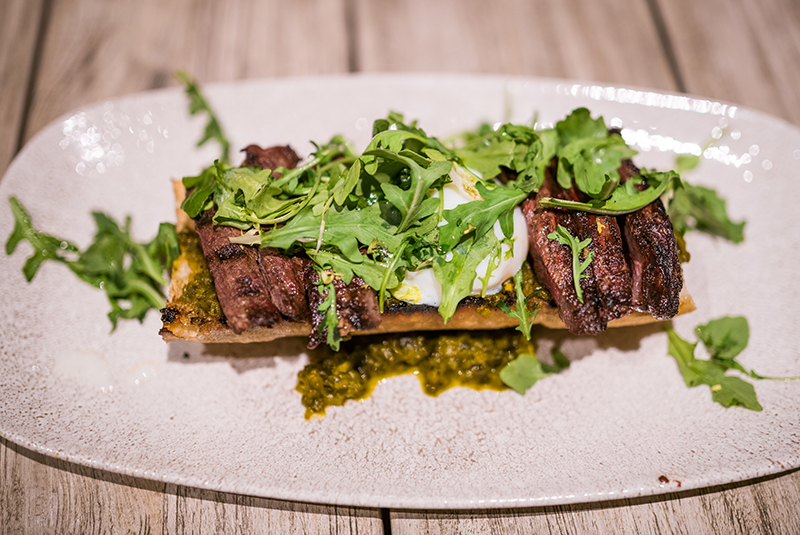 Next, the Grilled Skirt Steak with grilled baguette, pepper relish, and egg.

This is nearly identical to the Open-faced Skirt Steak Sandwich at Ale & Compass about which we’ve raved. The sweetness of the relish is a nice contrast to the savory steak, which is itself tender and juicy.

The skirt steak can stand on its own, and I’d recommend eating it separately from the bread; the juices and relish soak into the baguette to make that a flavorful side on its own. 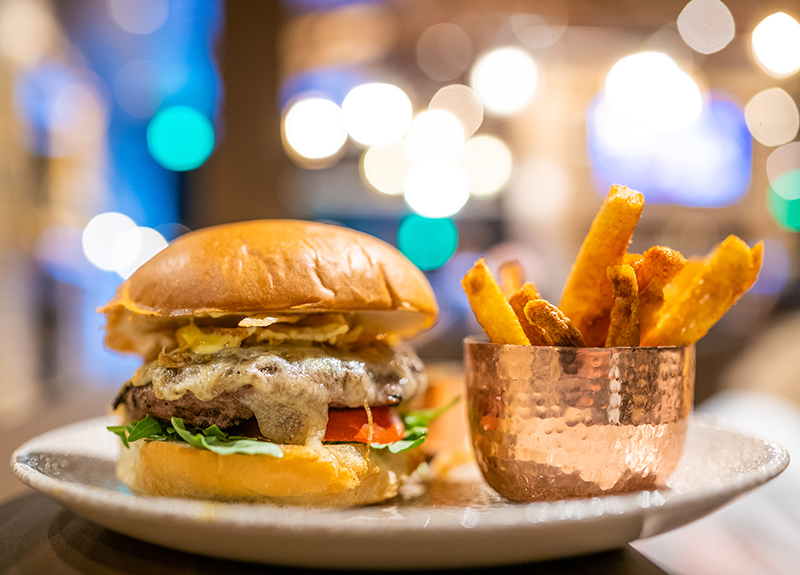 This is another fantastic option ranking among the best burgers at Walt Disney World. Cooked to a perfect medium-rare, this is juicy and delicious. 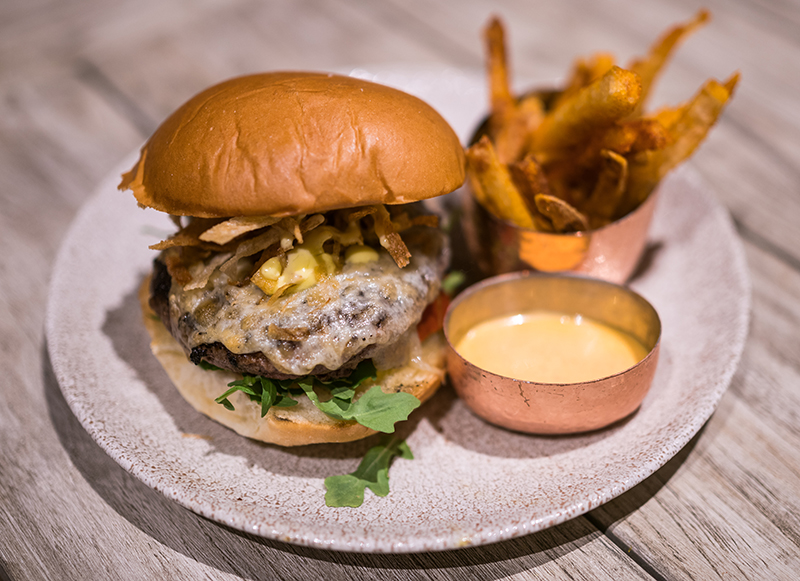 The bun is soft and airy, the thinly-sliced crispy potatoes offer a bit of texture without altering the flavor profile too much, the cheese has an understated sweetness and piquancy, while the garlic-lemon aioli brings it all together with a punch–and only a light hint of citrus flavor.

This is sure to be a crowd-pleaser. It immediately enters the “best burger at Walt Disney World” conversation. 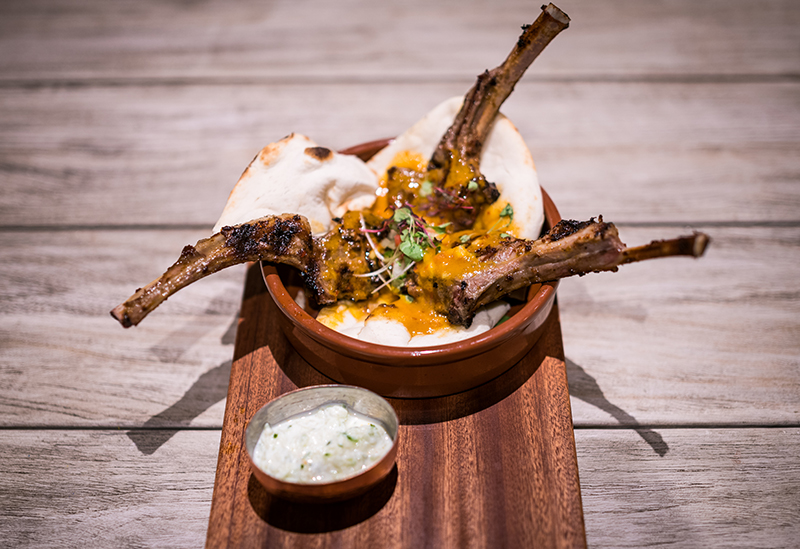 Our final entree is the Harissa Lamb Chops.

This is a fun and more inventive dish, with a rub giving them a (still relatively mild) bit of kick. The perfectly-prepared lamb is accompanied by cucumber and tomato relish, as well as mint yogurt to offset whatever ‘heat’ the dish might offer.

It’s also served with pita; for me, the pita and accompaniments work best together. As with the skirt steak, the lamb works really well on its own, and I found the relish actually detracted from the meat rather than enhancing it. By contrast, the pita, relish, and yogurt are all good together. There was a bit less meat here than I would’ve liked, but the price was also lower than I would’ve expected, so perhaps that’s a wash. 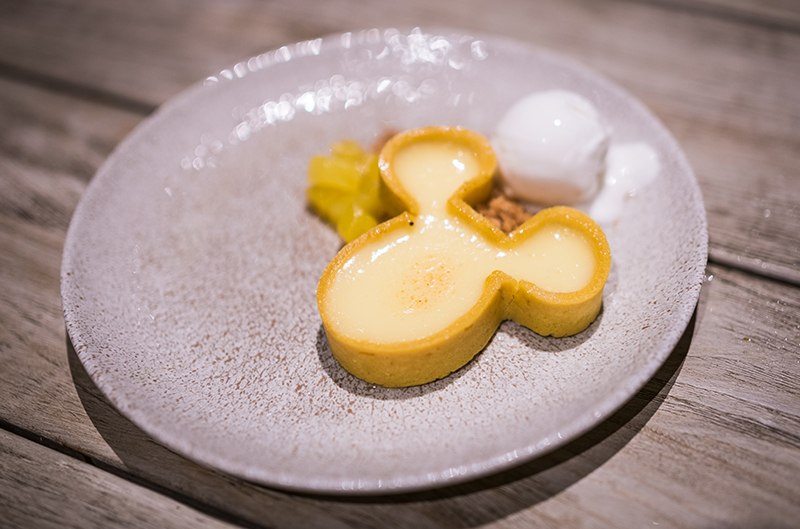 For dessert, we start with the Vanilla Custard Mickey Tart with compressed pineapple and tropical sorbet.

This is pretty much exactly what you’d expect if you’re familiar with Walt Disney World dessert tarts, albeit slightly smaller and slightly better. The tartness of the custard is offset by the sweetness of the pineapple and tropical sorbet. The crumbs provide nice texture.

If this is what you’re looking for in a dessert, it’s likely to satisfy you. The quality is good, but I personally was disappointed by the size. It’s also ‘all relative’ and I’d say this was the weakest item of our meal. 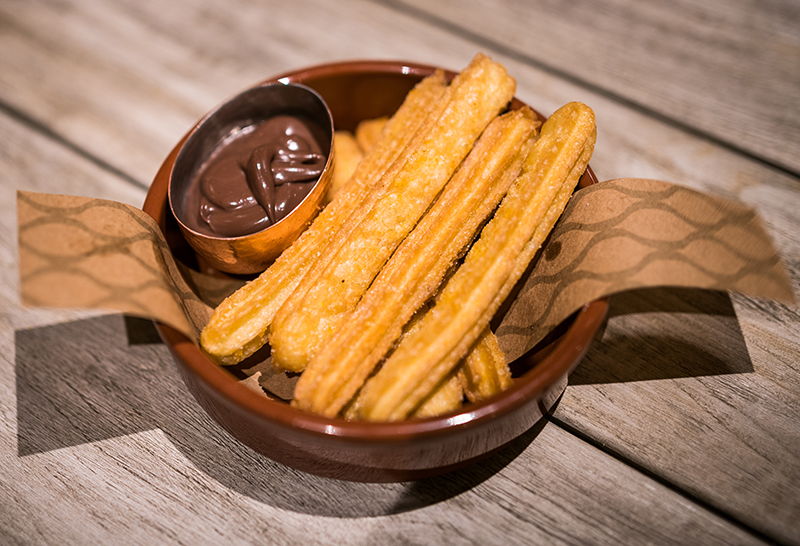 We’ll finish out the review with a look at the Warm Churros with Espelette pepper sugar and chocolate sauce.

The title of this review was almost, “Finally, A Place to Get Good Churros at Walt Disney World.” While I stand by that position (and the more controversial implicit one that the rest of Walt Disney World’s churros are bad), it felt a bit too snarky. 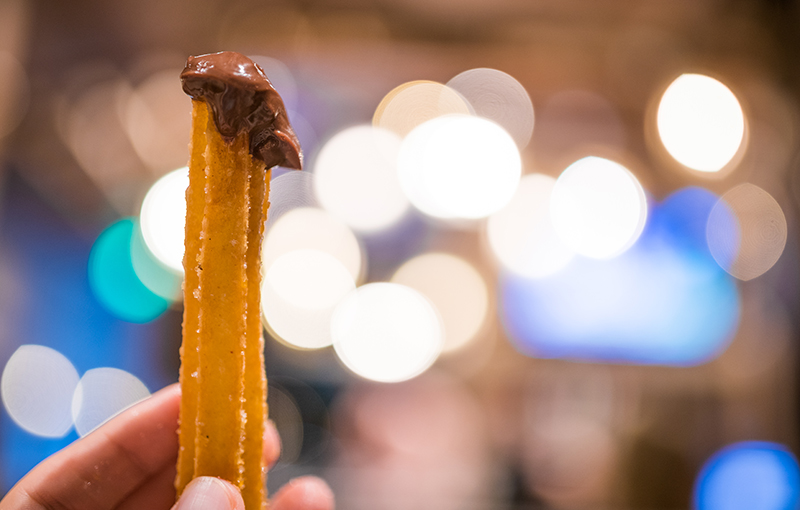 The point here is that these churros are fantastic, and will be a revelation if you’re used to the in-park ones. A slight crispness on the outside, warm and soft on the inside, and without an excessive sugar caked on. (The light sprinkle of Espelette pepper sugar is the perfect touch.)

These deliver great flavor, and it’ll be tough to go back to normal Walt Disney World churros once you’ve had these. I’m not joking–these are an absolute must order. Get multiple rounds of these churros instead of one of each dessert. This is technically a shareable dessert, but you’re better off eating them all yourself. 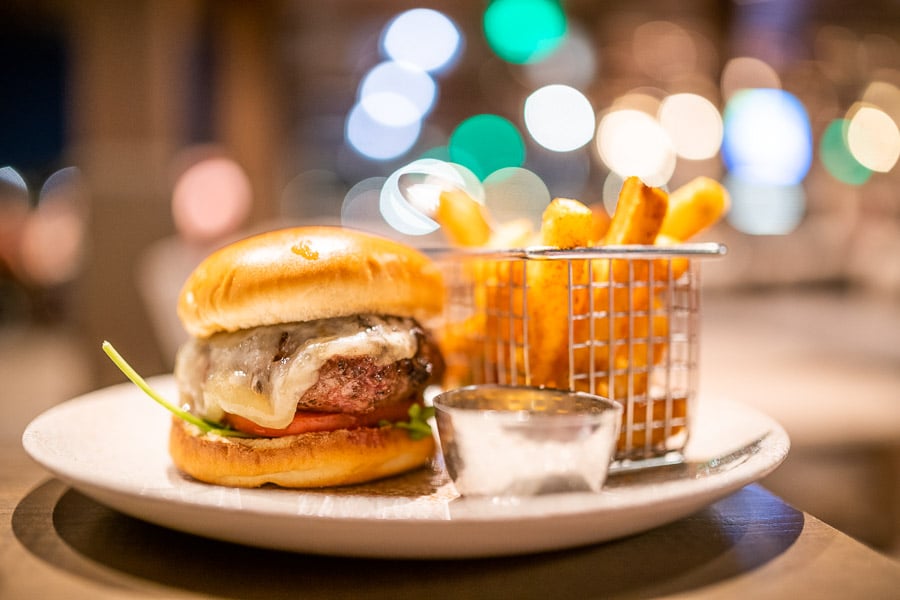 Overall, Three Bridges Bar & Grill is a big winner for us. The food is great, interesting, and fairly priced. In terms of value for money and cuisine quality, we’re finding more reasons to plan for most of our meals at the resorts and Disney Springs, and fewer in the parks.

Of course, this doesn’t always work (particularly at lunch), and there are still a lot of in-park options we love for their themed environments (or certain menu items). However, with some of the parks closing earlier and Three Bridges Bar & Grill open until midnight, it’s viable here for a late dinner!

Have you tried Three Bridges Bar & Grill yet? Do you agree or disagree with our review? Any thoughts on the menu, service, or anything else covered here? If you’ve yet to dine at Three Bridges, is this restaurant on your ‘list’ of places to try at Walt Disney World? Any questions we can help you answer? Hearing your feedback–even when you disagree with us–is both interesting to us and helpful to other readers, so please share your thoughts below in the comments!