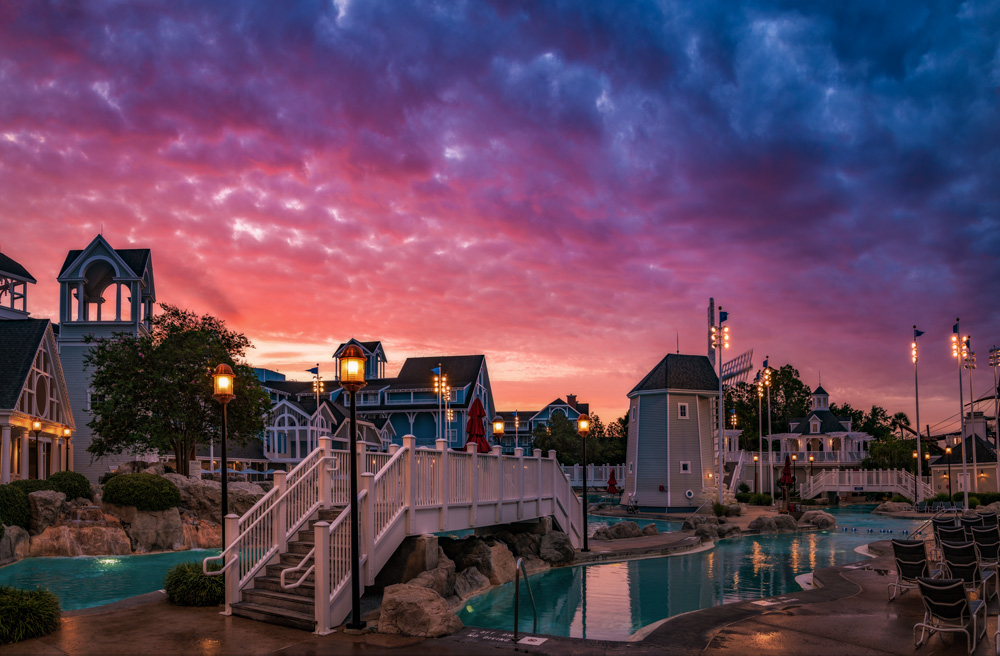 As Walt Disney World’s phased reopening continues, so too do our hotel stays. In this resort report, we return to Yacht Club to check out the new health safety protocol, enhanced room cleaning, dining, Stormalong Bay pool crowds, and more.

Our stay at Disney’s Yacht Club Resort was at the beginning of September 2020, shortly after the hotel’s reopening. We booked this ‘strategically’ on the very first day of maximum savings offered by the Florida resident and Annual Passholder “Rediscover the Magic” room discounts.

We were initially a bit apprehensive about choosing these dates; there are only two brief windows where the largest percentage off from that deal intersects with the lowest rate seasons at Yacht Club. Consequently, we worried there might be a surge of locals and APs booking for the same dates, taking advantage of a rare opportunity for Yacht Club at under $300 per night. Our fears turned out to be totally unfounded…

However, this experience at Yacht Club came really close to that. Definitely less busy than our August stay at Caribbean Beach or prior visits to other hotels in the last month. It’s pretty clear that off-season has arrived at Walt Disney World and we’d expect this to continue with a handful of exceptions (Labor Day weekend being the big one) through October.

Anyway, let’s start the Yacht Club stay report with a look at our room… 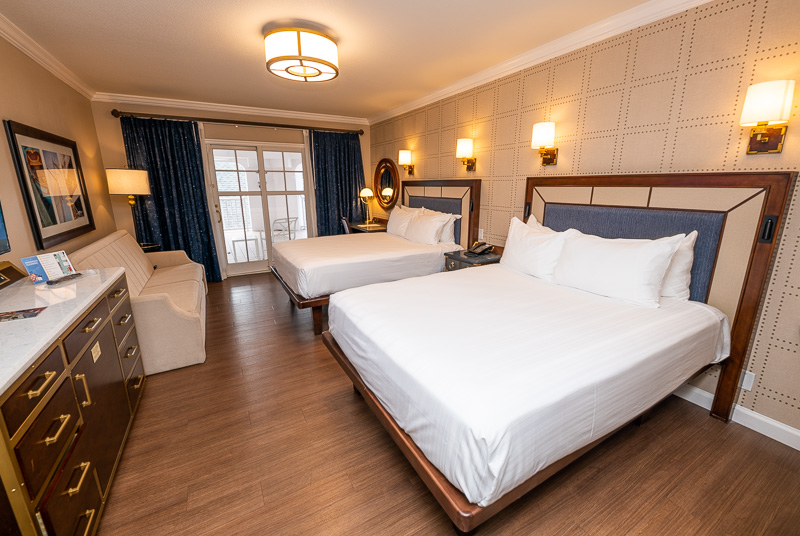 My first move when entering any Deluxe Resort room at Walt Disney World is racing to the balcony to check out the view and seating arrangement. This is a relatively ‘new move’ that’s driven by our stays the last couple of years in the Crescent Lake area.

BoardWalk Inn, Beach Club, and Yacht Club are home to some “quirky” rooms due to the configuration of the resorts. For the most part, this is a good thing. These rooms have personality and are different from their standard counterparts. However, we’ve had some poor luck with balconies on this front, getting a couple of rooms with standing-only balconies or other unusable options. 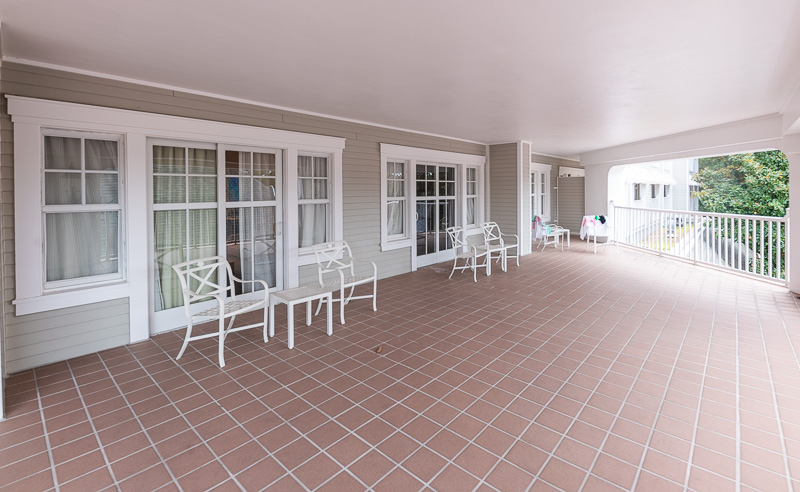 So imagine my surprise when I open the balcony door and there’s balcony as far as the eye can see. Finally–payment for our patience! Or so I thought.

Then I saw another guest in the corner of “our” balcony. It turned out this large terrace was actually a shared balcony for 4 different guest rooms, making it a bit awkward to use. It would’ve been awesome for a large group booking a block of rooms, but that wasn’t our situation. 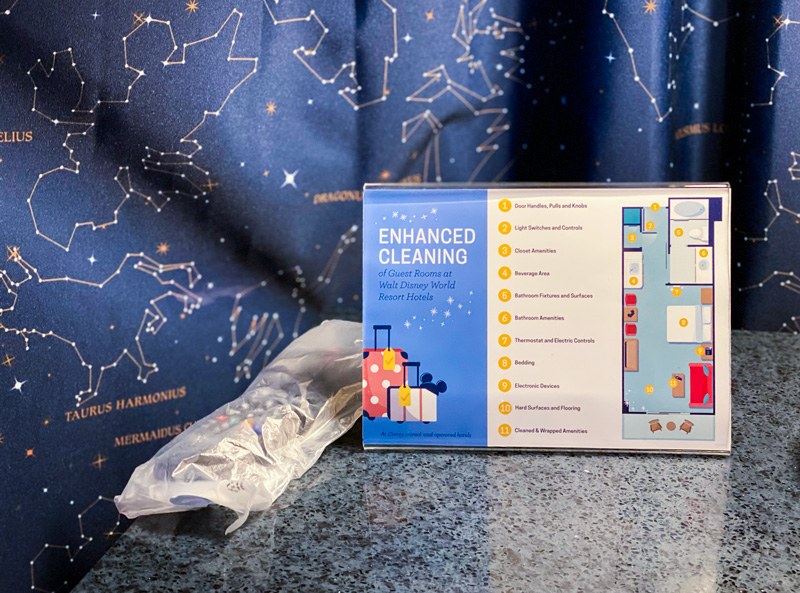 Oh well. I still enjoyed the balcony and used it both early in the morning and late at night, never really “encountering” our neighbors again. Back inside, here’s a look at the enhanced cleaning sign.

We noticed a couple of spots where our room’s cleaning clearly was not so “enhanced,” but we didn’t really care. (Of course, it’d be nice if the room were clean–but it doesn’t bother us from a health safety perspective.) Personally, I wish Disney would emphasize what they’re doing in terms of ventilation and air filtration rather than so much focus on hygiene theater. 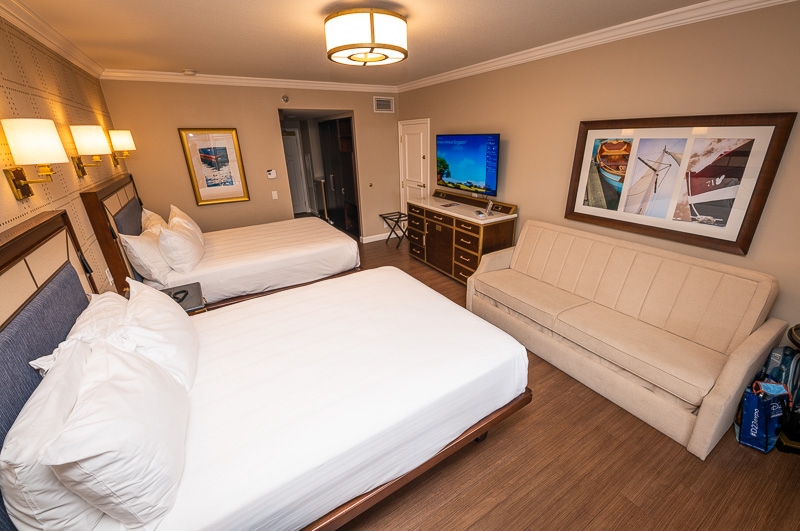 Another look at the room. We are both big fans of the new rooms at Yacht Club. That’s an unpopular opinion, but our take is that there are a lot of subtle details–both thematic and dashes of Disney–that most guests miss.

We’ve been highly critical of Walt Disney World’s recent room redesigns, but Yacht Club’s is an exception to that. These rooms are actually under-appreciated. The details are better, the functionality is markedly improved, and the rooms are now a better thematic match with the resort as a whole. They aren’t perfect, but they’re an upgrade. 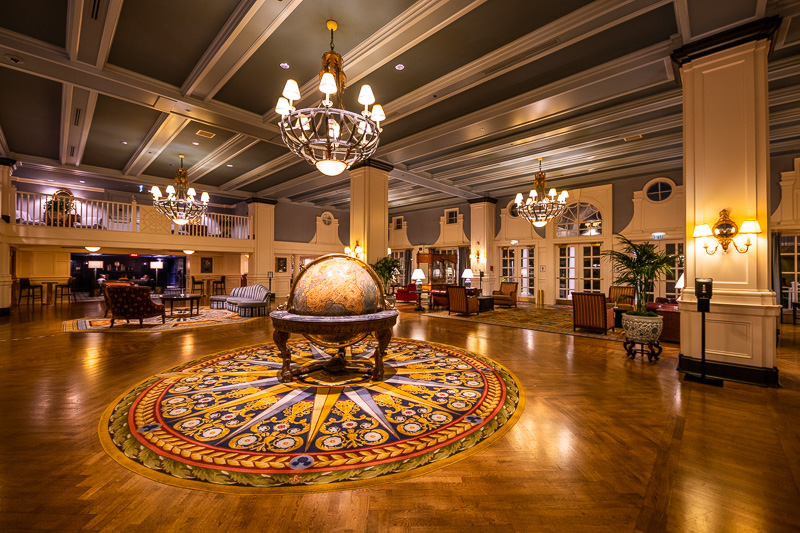 On that note, it’s interesting how personal preferences change over time. There was a time when I strongly favored Beach Club, feeling it offered the kind light-hearted “vacation mode” escape perfectly befitting Walt Disney World.

I still sort of feel that way and prefer Beach Club, but the gap has narrowed tremendously. There are also several aspects of Yacht Club that are more to my tastes–with the rooms being the biggest example of this. (I’m not a fan of Beach Club’s new rooms.) 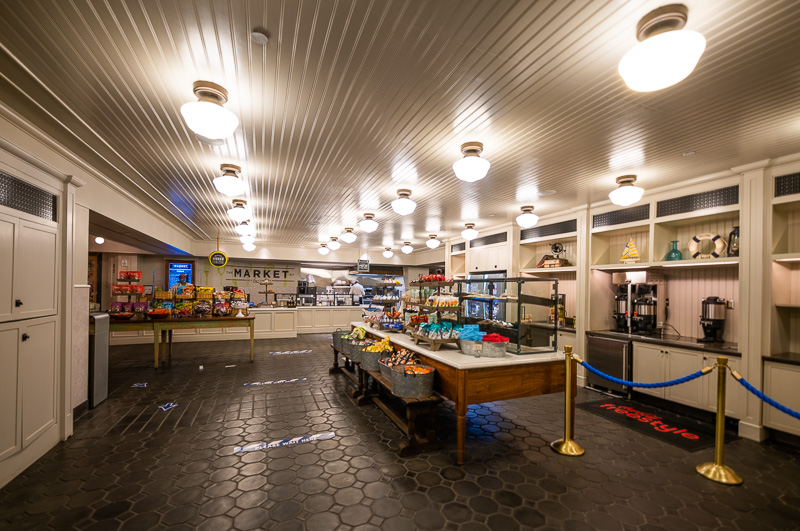 Bouncing to dining, here’s a look at the Market at Ale & Compass, which is Yacht Club’s counter service restaurant and gift shop.

Mobile Order is available here, but so too is ordering at the counter. This is a suitable option in a pinch (we did a late night meal here after “forgetting” to eat dinner in EPCOT during this stay), but it’s nothing special. 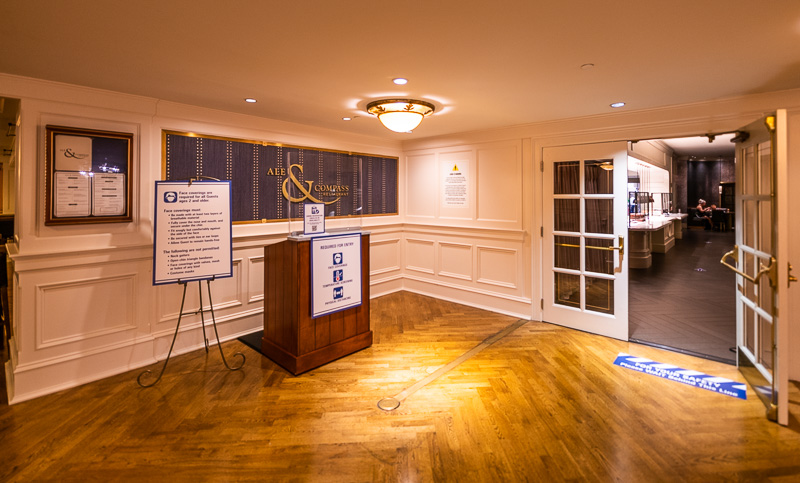 The table service Ale & Compass Restaurant has also returned, and it was pretty busy for dinner–even relatively late at night. It was somewhat odd to see the lobby totally devoid of guests but Ale & Compass with a “full” (reduced capacity) house. This is pretty common at resorts right now, and is due to a lack of options and earlier park closing times.

As we’ve noted countless times, we’re only dining outdoors at Walt Disney World to err on the side of caution. Several readers have asked how more ‘open air’ restaurants fit with this. I don’t have the necessary expertise to offer a definitive assessment, but I’d personally feel more comfortable dining somewhere like Chef Mickey’s than the Wave, for example. Though the difference is less pronounced, I’d also favor the better-ventilated Ale & Compass over Beaches & Cream. 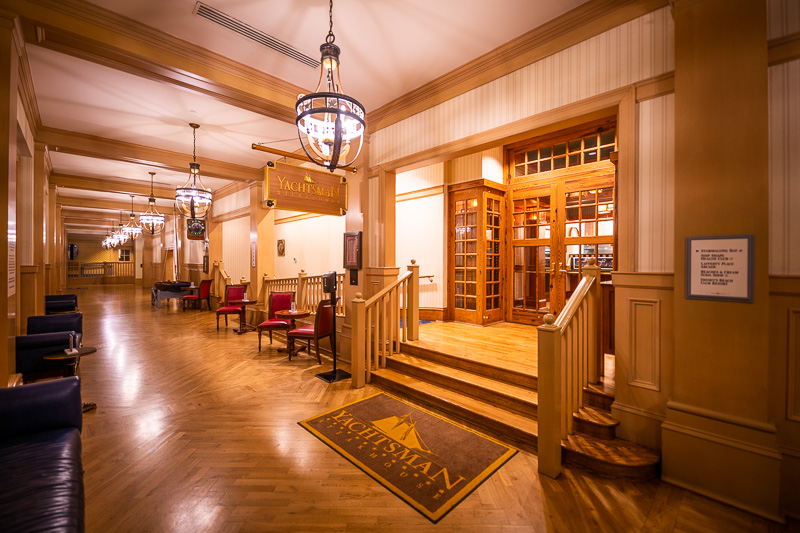 This comes down to a mix of personal risk tolerances, mitigation, and reward. My desire to dine at Chef Mickey’s is less than zero, so I’m willing to take no level of risk to dine there (I suspect the greatest danger at Chef Mickey’s is still the food).

By contrast, I want to dine at Yachtsman Steakhouse with every fiber of my being, even though it’s unquestionably higher risk. It’s not yet open, so “thankfully” I don’t have to make that tough decision yet. 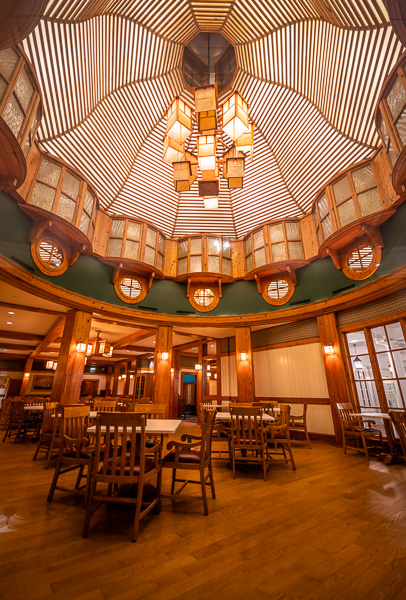 That’s not meant to be flippant. Realistically, society is unlikely to ever return to zero levels of risk when it comes to all of this. Daily life will become safer over time for a variety of reasons (again, this is a temporary abnormal rather than new normal), but the best case still likely involves non-zero risk when doing certain things, such as dining indoors.

Part of what’ll happen is that risk-taking will increase over time as we collectively grow fatigued and habituated to this. Obviously, different people have different risk tolerances–that’s already evident. Mine just so happens to be influenced by steak. Even then, I wouldn’t yet be comfortable dining at Yachtsman Steakhouse if it reopened today. (I can still daydream!) 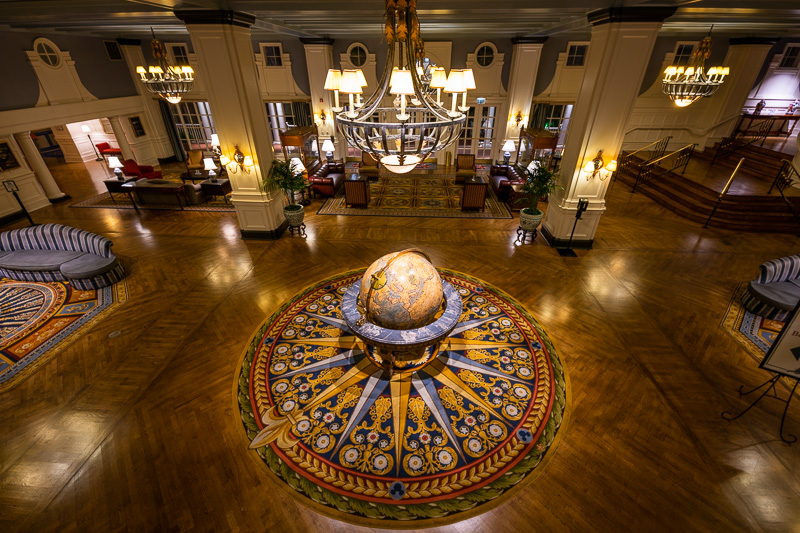 Moving along, one thing I love about staying at the Crescent Lake resorts is getting up before sunrise for quiet strolls and, if conditions are right, frantic photography.

Thanks to a comedy of errors, this stay was not conducive to that. After waking up a little late, I was in a hurry to get out of the room…and didn’t realize I wasn’t wearing a face mask until in the lobby. I raced back to the room and grabbed it, losing about 5 minutes in the process. 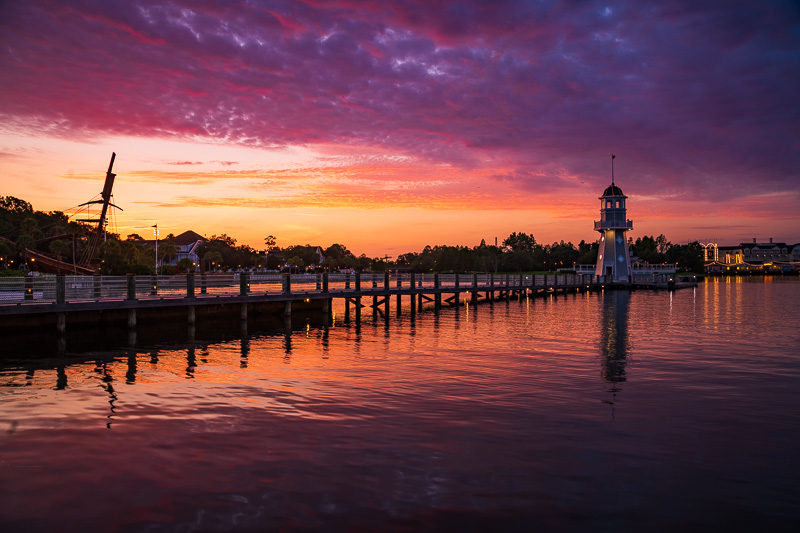 As a result of our balcony ‘situation’, I choose to leave my camera bag in the room overnight instead of leaving it on the balcony like normal. The huge difference in temperature meant my lenses were fogged up for a good 10-15 minutes once down by the dock.

Once my photography gear finally did warm up and the condensation went away, I discovered that my battery was dead. It had three bars left as of the previous night, so I can only assume this was due to the dramatic temperature change. 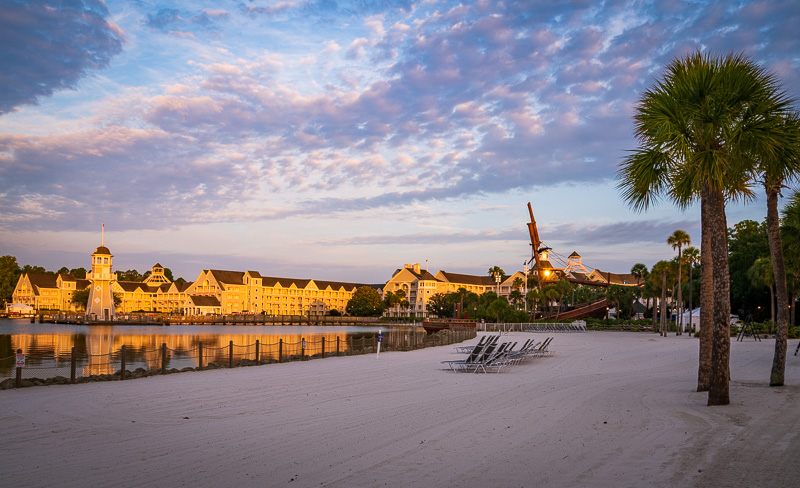 Honestly, I’d rather have multiple impediments than just one. A single error is frustrating because you’re so close but still just as far away. Many problems enters the realm of ‘comic mishaps’ that are easier to laugh off.

In any case, all of the sunrise photos here are previously-unedited ‘file footage’ from our last stay at Yacht Club. The sunrise this particular morning sucked anyway. 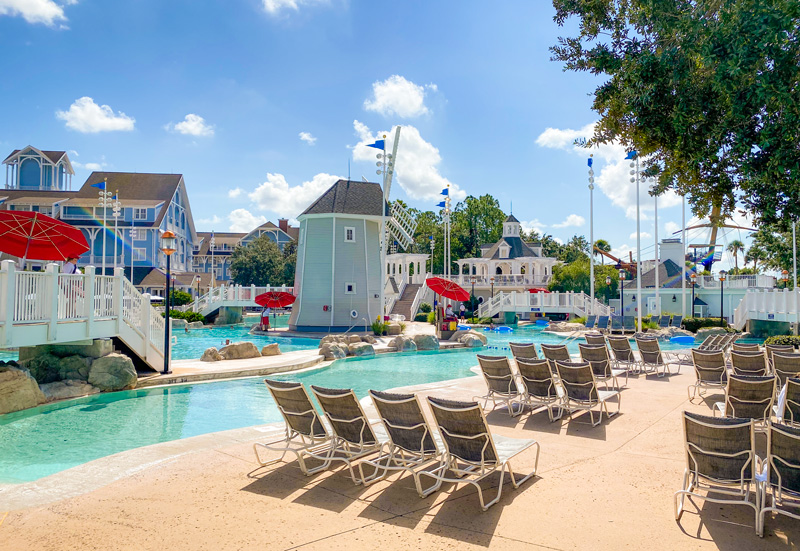 The bigger issue with the dead battery was that I hadn’t taken most of the photos I needed for this post. We spent the previous day enjoying our time at Yacht Club, not overly fixated on photos.

The plan was to grab most of what I needed the following morning, which is pretty par for the course. Have fun one day, document the next. Consequently, much of what you see here was shot with my iPhone. (Pretty remarkable how much phone camera quality has improved in recent years!) 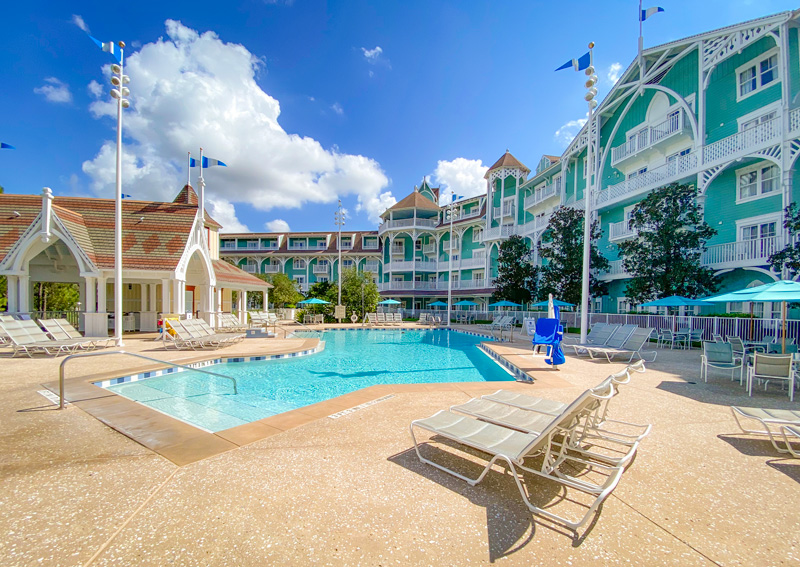 Both Stormalong Bay and the quiet pools were totally uncrowded throughout our stay.

There were times when the quiet pools had literally no one in them, and Stormalong Bay was the least busy I’ve ever seen it outside of winter. Definitely slower than normal, even for an off-season weekday. 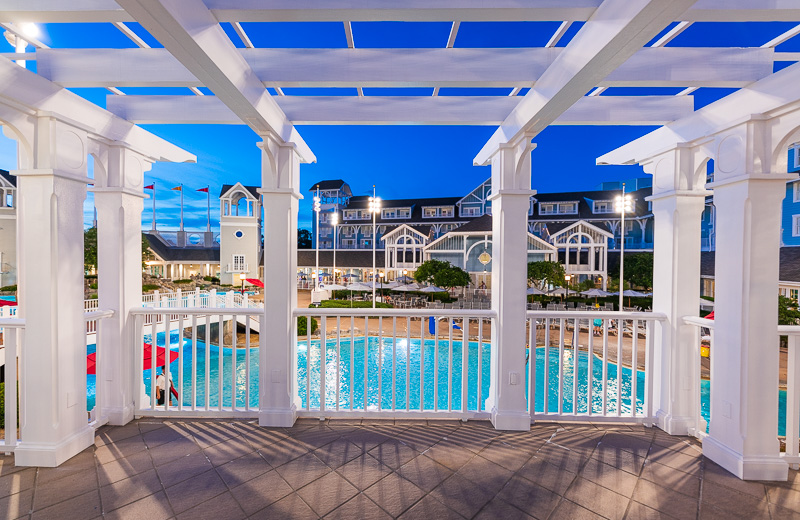 Expect that to change on weekends, as we’ve already seen more Floridians doing “staycations” when off work. 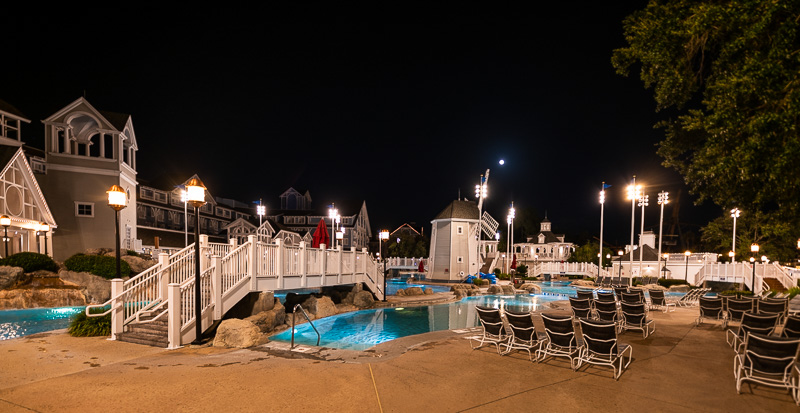 However, it’s still good news to see significantly fewer people in Stormalong Bay. Our last couple of strolls around Crescent Lake, the pools at BoardWalk Inn and Beach Club were all packed.

Reopening Yacht Club means more guests staying in the Crescent Lake area, but it appears to us that the increased pool capacity is far greater than the increase in people. 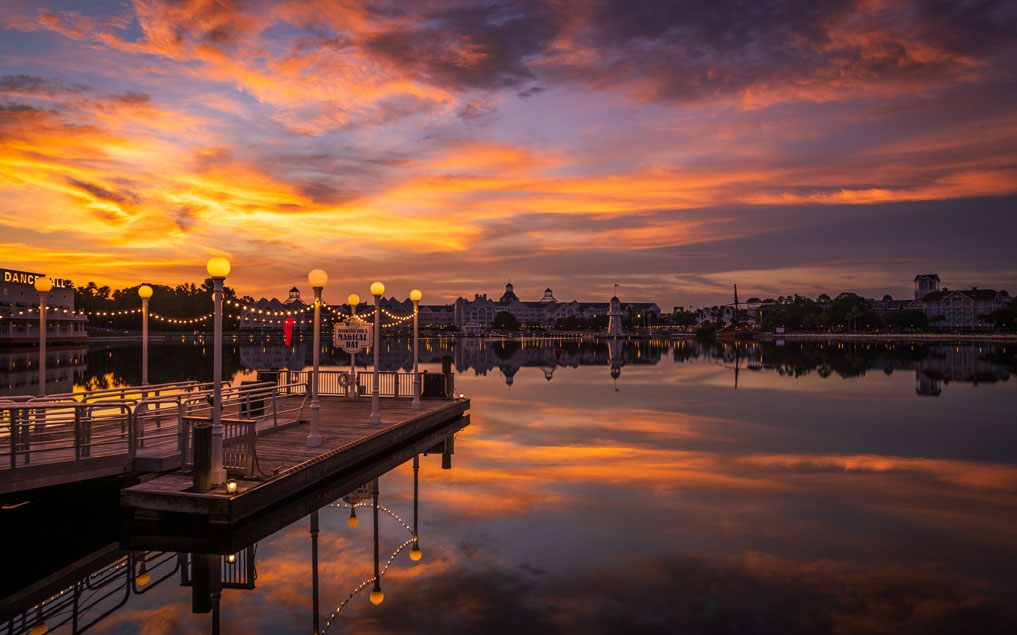 Finally, a quick note about transportation as there have been recent questions about it. The FriendShip boats around Crescent Lake and to/from Disney’s Hollywood Studios and EPCOT are not currently operating. Neither is the EPCOT monorail line between the front of that park and the Transportation and Ticket Center.

Neither the boats nor the EPCOT monorail have reopening dates. We don’t have any insight as to when they’ll resume, but our guess is Spring 2021 at the earliest. Perhaps Christmas/New Year’s, but that seems doubtful.

Ultimately, another great stay save for the ongoing balcony bummers and my unforced error with sunrise photography. Yacht Club continues to move its way up my list of favored Walt Disney World resorts; it truly is underrated in a number of ways. With convention business nonexistent for the foreseeable future, hopefully the discounts continue to flow at Yacht Club.

Thanks to a mix of hotel deals and low occupancy, plus our supply of DVC points and the likelihood that 2021 will be difficult to book with those points, we’re planning on doing several stays over the next 4 months. So, hopefully you enjoy these resort reports! Next up are Pop Century and Disney’s Riviera Resort. Let us know if there’s anything you’d like to see from those properties.

Have you stayed at Disney’s Yacht Club Resort since it reopened? What do you think of all the modifications? Experienced Stormalong Bay? Have any anecdotes of your own to share with regard to the pools or rooms? Will you be booking a resort reservation for Walt Disney World this fall, or are these rules/restrictions/policies going to cause you to postpone? Do you agree or disagree with our assessment? Other thoughts or concerns? Any questions we can help you answer? Hearing your feedback–even when you disagree with us–is both interesting to us and helpful to other readers, so please share your thoughts below in the comments!