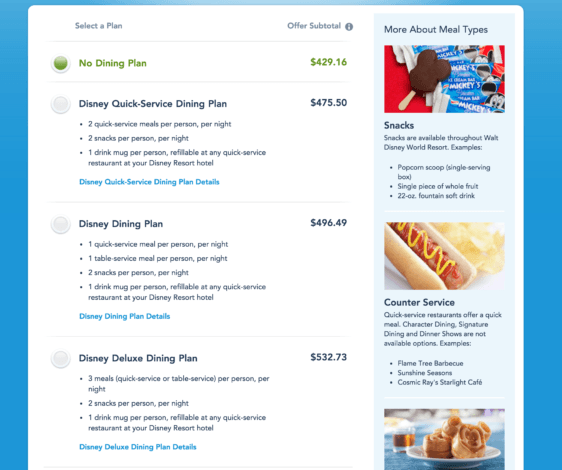 Walt Disney World has released 2017 vacation package information, and along with it, pricing and details for the various Disney Dining Plans. Naturally, there are pricing changes. The Quick-Service and standard Disney Dining Plans each increase by about 4-6%, while the Deluxe Dining Plan decreases by around 11%. (Wait. Decrease? That can’t be right.)

We note that Disney has not yet released official pricing for the 2017 Disney Dining Plans, so we reverse-engineered the pricing by selecting a travel date that was in the standard season previously, and doing the math ourselves to remove the known costs of other elements of the package (see screenshot above–that includes hotel, tickets, and Dining Plan, so you can pick your jaw up off the floor). While those increases seem pretty consistent with past years, a decrease on the Deluxe Dining Plan seems odd. However, that is what the math shows. We aren’t totally convinced that Deluxe pricing is accurate (although there might be reason for it, as you’ll read below), so if you want the Deluxe Plan for 2017, consider booking now to lock-in that pricing. (On the downside, since there are no discounts for 2017 available yet, once you apply a future discount, you have to apply whatever pricing is at that time…)

Based upon our theoretical travel 2017 travel dates, adult per night pricing for the plans is as follows: $46.34 for the Quick-Service Plan; $67.33 for the standard Disney Dining Plan; and, $103.57 for the Deluxe Disney Dining Plan. The Dining Plans have been subject to peak season surcharges for several years now, so if you’re traveling during a busier time of year, you can expect to pay more.

In addition to the predictable pricing increases, there is one other notable change. This is that Counter Service meals will no longer include dessert. Instead, guests on both the Standard and Quick-Service Disney Dining Plans now receive 2 snacks each day instead of 1. We consider this a reasonable “win” for guests using the Standard DDP, as the extra snack credit is more versatile than a dessert. This is especially true for those traveling during Epcot’s International Food & Wine Festival, as the most expensive booth items cost ~$3 more than the most expensive snacks, so there’s good opportunity to squeeze more value out this plan. However, for those on the Quick-Service DDP who would use the counter service credits for lunch and dinner, you’re effectively trading 2 desserts for 1 snack credit–not such a good deal.

This also could, potentially, explain the price drop on the Deluxe Plan. Its definition of a Counter Service meal also changes to cut the dessert, but there’s no corresponding snack credit increase. If the price cut on that plan holds, we suspect maybe Disney has seen a drop in Deluxe Dining Plan usage after disproportionate price bumps the last couple of years. 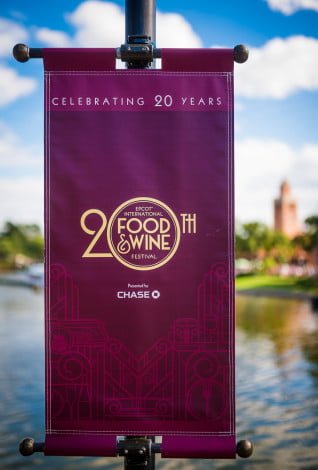 You can read official details about the various Dining Plans in Disney’s pamphlets:

You might notice that there are some notable omissions in terms of participating restaurants in these PDFs. Don’t freak out. These preliminary lists always leave out restaurants that end up participating. Numerous restaurants at Walt Disney World are owned and operated by third parties (Yak & Yeti, for example), and they take a bit more time to negotiate and finalize their status with Disney. Not accepting the Dining Plan would be extremely detrimental to many of these restaurants, so you can expect to see them added in due time. 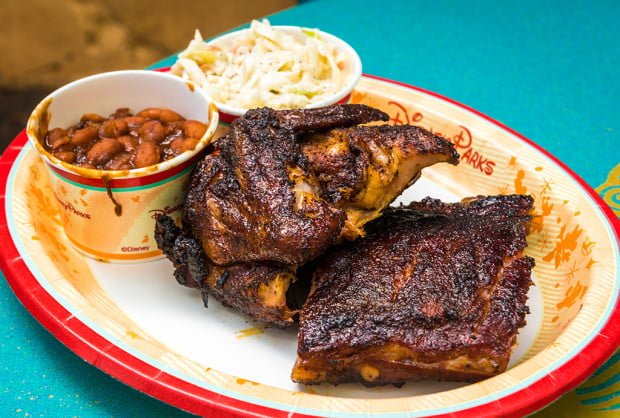 We used to be fans of the Disney Dining Plan, but it has been several years since we’ve recommended it–at least to most normal guests who don’t bring wolf packs that devour steaks at every single meal and use a spreadsheet to ensure they are getting their money’s worth–due to price increases negating the potential savings it once offered. We fixate on why the Disney Dining Plan is a poor value in our Disney Dining Plan Info, Tips, Pros & Cons post, so I won’t rehash that here.

Suffice to say, for most guests, the Disney Dining Plan only offers a pretense of convenience and budgeting assistance. In reality, most guests traveling on a budget will be better suited by purchasing discounted pre-paid Disney gift cards or some other means of advance budgeting, and simply paying out of pocket is far more convenient than adhering to the convoluted rules of the Dining Plan. While the Dining Plan can provide small savings in some circumstances, about the only time when it can be classified as a ‘good’ deal is during the Free Disney Dining Plan Promotion that typically is offered for fall travel dates. (Expect Fall 2017 Free Dining dates to be available around late April 2017.)

As for the changes, themselves, for the 2017 Disney Dining Plan, we consider them a net win–especially for those taking advantage of Free Dining with the Standard DDP. The price increases are, obviously, a bummer, but who didn’t see that coming? These increases are at least partially offset by swapping the counter service dessert for an additional snack credit. This isn’t enough for us to move the needle back in favor of using the Disney Dining Plan–or recommending it–but for those who are dead-set on using it, that is an improvement. 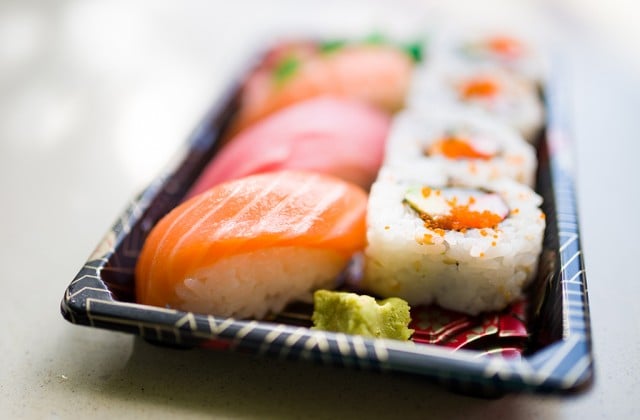 If you enjoyed this Walt Disney World dining post, we’d really appreciate it if you’d share it via social media! We put a lot of work into making this site a helpful planning resource, and hope it’s useful to you. 🙂

What’s your take on the 2017 Disney Dining Plan changes? Do you use the plan for eating at Walt Disney World? What advantage or disadvantages do you think it offers? Share your thoughts or questions in the comments!