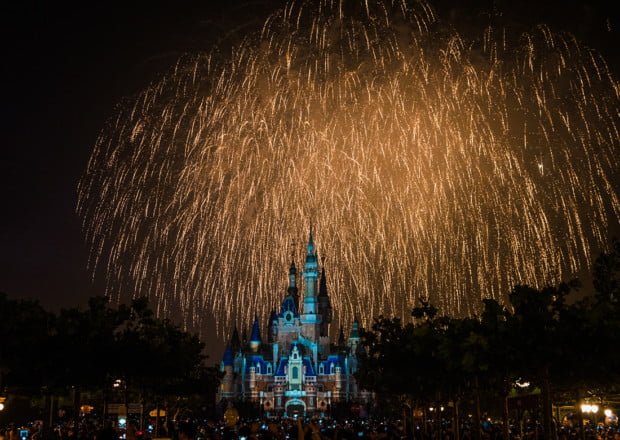 Shanghai Disneyland has been a long time coming. The project dates back to Michael Eisner’s tenure as CEO in the 1990s, and got serious with a letter of intent in 2002 before Hong Kong Disneyland even opened. Bringing the park to fruition from there was not simple, and took years of negotiations before the Shanghai Disney Resort project was finally announced in 2009 as a joint venture between Disney and the state-owned Shanghai Shendi Group. Thereafter, construction started in 2011.

I remember hearing the Shanghai Disneyland announcement at the time and thinking it sounded cool, but didn’t really give it second thought. Back in 2009, we were making annual vacations to Walt Disney World, engaged to be married, I had just gotten into photography, and this blog was still a couple of years away from existing. We hadn’t visited Disneyland, much less any of the other international parks. Although international travel was something we wanted to do eventually, we saw little reason to visit any Disney destination beyond Walt Disney World. After all, it was the largest, and therefore, the best.

What a difference seven years makes. Shortly after the announcement, we visited Disneyland for the first time, which opened our eyes to the possibilities of the other parks. Being fresh out of school with student loan debts, international travel still seemed years away. In fact, in our 2012 Disney Bucket List post, we placed all of the then-open international Disney resorts in the “Very Ambitious” category of things we wanted to do. If you’ve followed this site at all since then, I don’t think I need to detail the intervening years…

That bucket list post also pegged opening day of Shanghai Disneyland as “relatively unattainable.” As we crossed other items off the list, it seemed more and more likely we’d do opening day. This was first cast into doubt when we heard reports of the Disney Store’s chaotic opening day, and we started to worry that foreign visitors would be at a real disadvantage–and possibly have difficulty even getting into the park–come the debut of Shanghai Disneyland. Further doubt was cast that we’d make it given the uncertainty about the opening date, whether all attractions would open with the park, and the possibility of the park opening during the humid summer months. 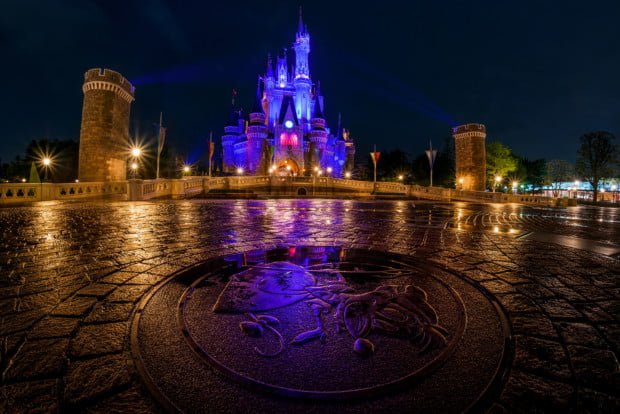 With no announcement as to the park’s opening, we decided to pull the trigger on a return trip to Tokyo Disney Resort earlier this spring, at which point we basically figured we’d put off a Shanghai visit until 2017. About a month after we booked that trip, a Shanghai Disneyland opening date was finally set. Naturally.

Probably to the surprise of no one, our “oh well, we’ll do Spring 2017” mentality started to give way to a “maybe we can make this happen for opening day?” attitude. This was facilitated by details about the advance ticketing process, which would ensure we wouldn’t be shut out on opening day. Once we confirmed we could do <$1,000 airfare, we decided to try for tickets to opening day the morning they went on sale. That itself was nothing short of chaotic, but after a few hours of refreshing, we had tickets and reservations for Shanghai Disneyland hotel (also reservations for Toy Story Hotel since the former was sold out when we first saw availability). 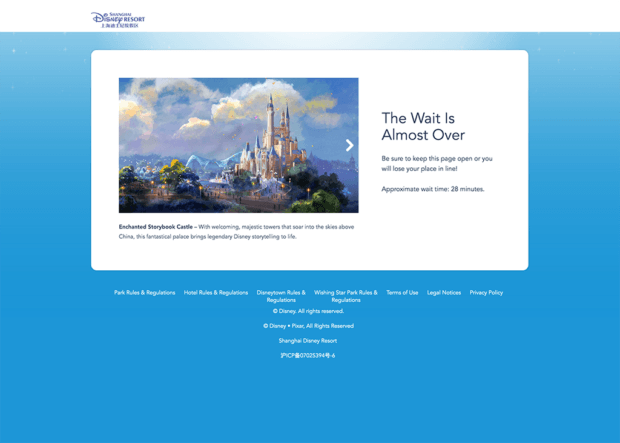 From there, planning began. I started following Shanghai blogs and sites to learn more about mainland China and what to expect. That turned out to be an awful idea, since one in particular–the Shanghaiist–pushed a xenophobic agenda, and gave rise to a lot of totally unnecessary apprehension. (An upfront note since this was an issue with our Shanghai Disneyland Grand Opening Impressions post, but I will delete any racist comments, so don’t waste your time or mine.)

Cutting to the chase, last week we headed for Shanghai from LAX on an itinerary that would also stop in Hong Kong for 2 days to take advantage of the 144-hour visa-free transit exemption rule. Normally, we would have spent more time in mainland China to explore the city, but we opted for a shorter trip because this was already pushing our travel budget for the year, and taking advantage of the visa-free exemption made sense for our first visit.

Still, we had a day and a half to spend in the city. We received a free room upgrade to a suite (travel hack side note: we always recommend having the credit cards of your favorite airline and hotel chain for the rewards and upgrade-potential), which was great given that we were traveling with Mark Willard to further save on costs. After marveling at the Shanghai skyline out our window for way too long, we called it an early night. 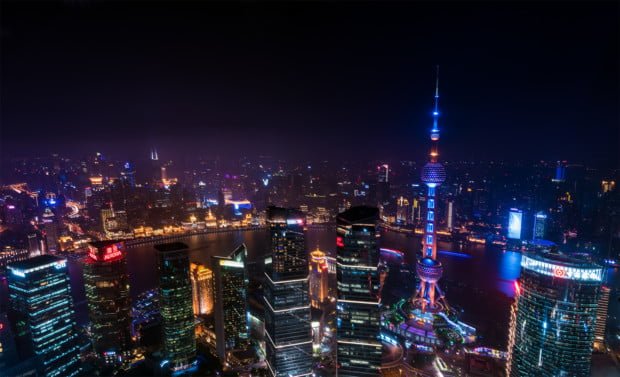 We were up early the next morning, and ready to head out to explore the city with our friend, Arthur. I won’t fixate on the details of our day here as I don’t want to lose you all with even more rambling text before opening day at Shanghai Disneyland, but if you have any questions on our outside-the-parks itinerary, feel free to ask in the comments. Suffice to say, we had a great day. Shanghai far exceeded our expectations and quickly dispelled stereotypes. I wish we had more time in the city. Next time we will probably get the travel visas so we can spend more time in Shanghai, and also visit Beijing or Jiuzhaigou.

Given that we were staying downtown on The Bund, we had about an hour commute to Shanghai Disney Resort the morning of opening day. The park didn’t open until noon for us, but we were worried that between rush hour and throngs of people descending upon the park for opening day, the Shanghai Metro could be a mess, so we left around 7:30 a.m. for Shanghai Disneyland Hotel. To our surprise, the Metro was largely empty after our first transfer–it probably helped that we were heading out of the city during rush hour, while everyone else was heading into town.

After a couple of transfers, we arrived at Disney Resort Station on Line 11. All told, it took a little over an hour from our hotel. Signage was surprisingly sparse at the Station as we tried to determine whether we should walk or take a bus to Shanghai Disneyland Hotel. As we were deliberating, Cast Members directed us towards the bus stop, so I guess that was that. 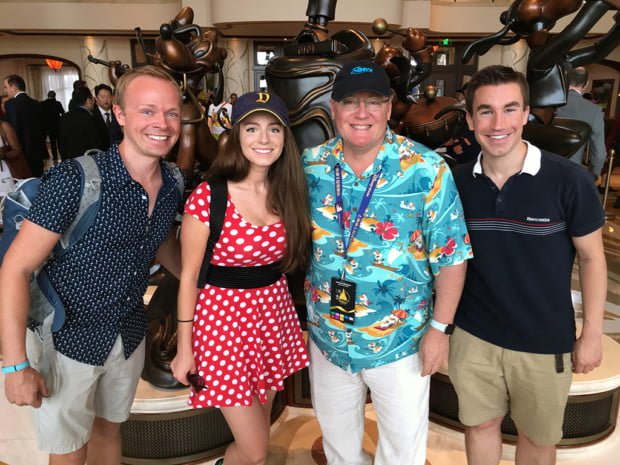 We arrived at Shanghai Disneyland Hotel a few minutes later, in what was clearly a mini-reception for high profile, invited guests. We saw John Lasseter, George Lucas, and numerous Disney executives. We didn’t want to be “those people” but after a few minutes of hesitation and debate, we finally approached Mr. Lasseter to say hello. He was beyond gracious, telling us to move from one side of the lobby to the other for a photo with the best lighting (he was right), and chatting with us for a few minutes. He seemed genuinely enthusiastic about the park, going into detail rather than just reciting a canned spiel. Although it’s tough to judge from afar, Mr. Lasseter has always struck me as one of the standard bearers of the “Disney Difference,” and a steward of the creative legacy that Walt Disney created with his company.

The next few minutes were a bit of a blur as we all found ourselves a bit starstruck, but after wandering around the lobby in a daze, we boarded the bus for Shanghai Disneyland. By the time we got dropped off, I want to say it was around 9 a.m., but I wasn’t really keeping track of time. We made a quick pass through World of Disney to take a peek at merchandise, and then headed through security. From there, we lined up at a turnstile, quite elated that we were about 5 people back in line. Only a few minutes later did we realize that they were scanning e-tickets at the turnstiles, and then directing guests to holding corrals backstage. 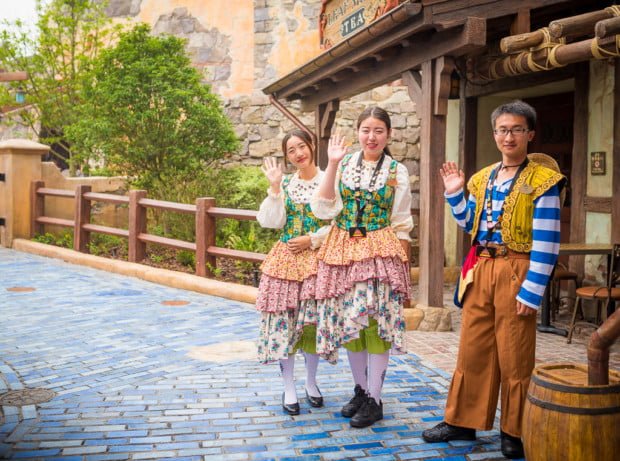 On the way to these corrals, we noticed a surplus of Cast Members, both local and from the United States. We had some friends who were sent over to Shanghai for training, so we knew there would be some U.S. presence, but we underestimated the extent of it. All told, there were hundreds of Disneyland and Walt Disney World trainers, managers, etc., present.

We were in our corral by around 9:45 a.m., and that’s when the wait began. It was rainy and overcast (more so than smoggy), which put a bit of a damper on the look of opening day, but honestly, it was better for touring than hot and humid (as we’d realize the following days). We saw a few people in line we knew, and met up with our friend Molly who had been in Shanghai for about the last 6 months and had visited during a few days of trial operations.

A couple of hours later, it was time for the four of us to head into the park. Right as we entered, Joe (another U.S. based opening day Cast Member) spotted us and snapped a quick photo. In our excitement, this ended up being the only photo of us from opening day, so thanks Joe!

After that, we emerged out from under the train station with a view of Mickey Avenue and Enchanted Storybook Castle. More importantly, hundreds of enthusiastic Cast Members lining the curb, smiling and greeting the first guests as we entered the park. The energy was palpable, and I cannot possibly articulate the feeling of entering Shanghai Disneyland that morning. This was the biggest goosebumps moment of the day, and alone justified the decision to attend opening day. (I have video of this, but I was trying to live in the moment, so I wasn’t watching the camera as I took it–I’ll have to do some editing to make it usable.)

My feelings on Enchanted Storybook Castle have been mixed since concept video was shown at the 2011 D23 Expo. At the most recent Expo, I pored over the model, and expressed some trepidation in our Shanghai Disneyland Preview that it might be a ‘big box’ castle trying to make a statement as the largest and most grand.

All of this melted away when I caught a glimpse of the castle in person for the first time. I don’t know about you, but when I see new ‘wow-factor’ things in the parks for the first time, analytical critique gives way to an emotional, gut-level response. Its mixed styles and ‘big box’ style didn’t even cross my mind, I was simply thinking “daaaaaaang” and “woooooooow” as I briefly marveled at it in an awe-struck state. I only saw it for a minute, but it had already begun to win me over.

That’s a lot of text before even getting to the first attraction, but we’ll finally get to some rides on page 2, as we do our first several attractions of the day…