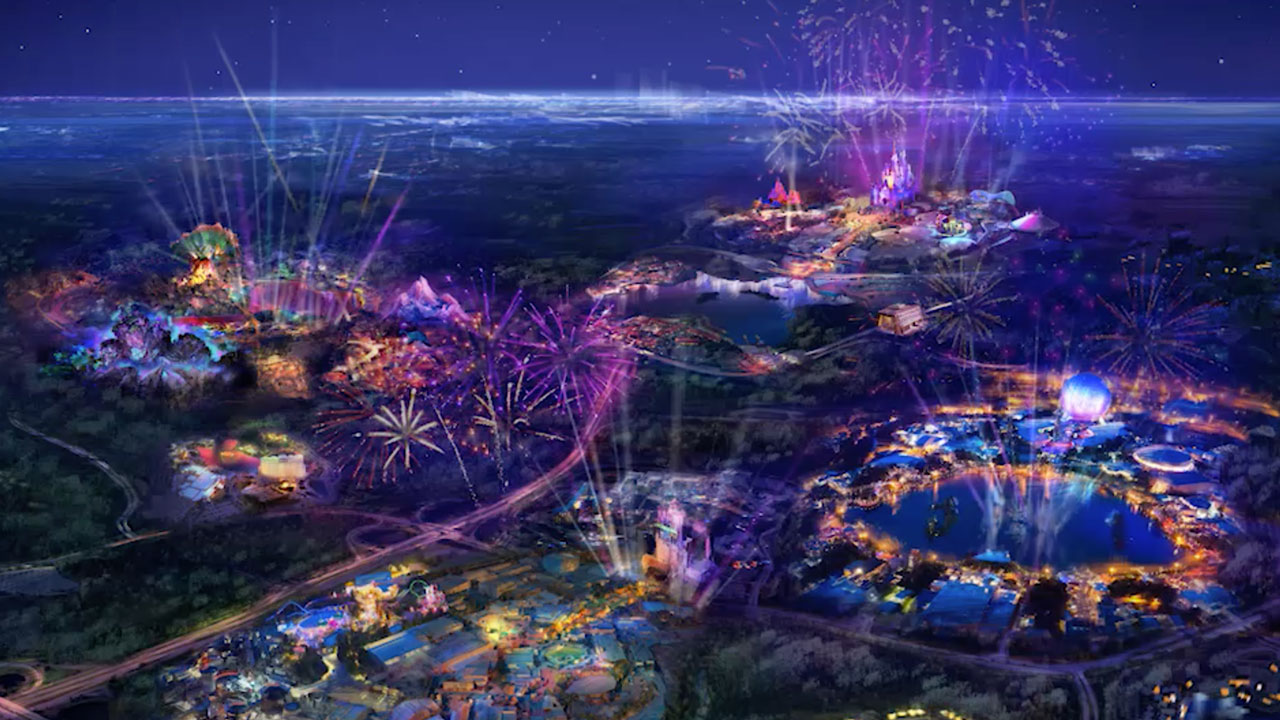 A lot was covered at the 2019 D23 Expo, from Walt Disney World’s 50th Anniversary to a new Zootopia Land, Castle of Magical Dreams, animation-themed Cirque du Soleil at Disney Springs, and much more that we haven’t tackled yet.

Originally, I planned on doing individual posts with my reactions to each piece of news, but that was before the Parks & Resorts panel actually happened. During his ~90 minute presentation, Disney Parks, Experiences and Consumer Products Chairman Bob Chapek bounced from topic to topic, covering a lot of ground.

Unfortunately, a lot of this was superficial ground. Some minor projects received disproportionate attention, whereas other major projects weren’t even mentioned. (No surprise, but the OLC-owned Tokyo Disney Resort, which has arguably the two biggest things on the horizon now that Star Wars: Galaxy’s Edge has debuted, wasn’t discussed at all.) With that said, rather than long posts for each brief announcement, I’ll do a quick round-up here with rapid fire reactions…

Walt Disney World’s 50th Anniversary – First, the most exciting event on the horizon–this promises to be one of the biggest ever at Walt Disney World, with the celebration extended to all four theme parks. Among the highlights will be amazing attraction openings, new entertainment, food and beverage, merchandise, and more.

My reaction: zero mention of what this will include, so I’m guessing we’ll either receive a slow trickle of info via the Disney Parks Blog, or another splashy announcement, perhaps at the 2020 Destination D event? Either way, a disappointment that the only thing shown was some balloons, MagicBands, banners, and a cupcake (seriously!) with an iridescent, rainbow-looking color scheme. 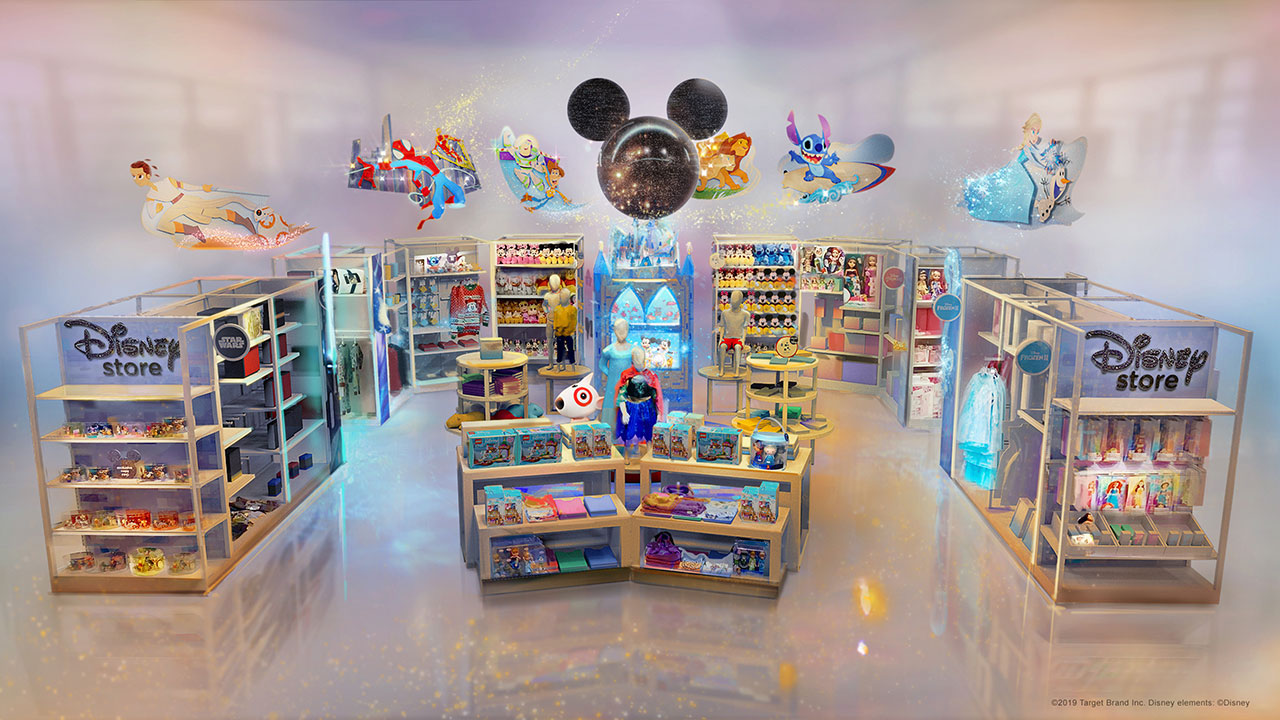 Target Stores – First, the Disney store “shop in shop” locations coming to Target. Bob Chapek claimed that fans are asking for more ways to shop for their favorite Disney products (I don’t believe this), which inspired the creation of this. In October, the Disney “shop in shop” experience will launch at 25 select Target stores, with 40 more opening by October 2020.

This is where me calling it the Parks & Resorts panel doesn’t work. I hate the name “Disney Parks, Experiences and Consumer Products” but more than that, I hate what it represents. I didn’t expect anything about Target stores at this panel (even though I did joke to Sarah before the presentation that they might jettison all Walt Disney World announcements and instead spend the entire 90 minutes on the “hot new Christmas toys coming to Amazon.com”), but whatever, I guess. I really wish Disney would stop trying to make fetch happen with this theme parks and shopping connection. 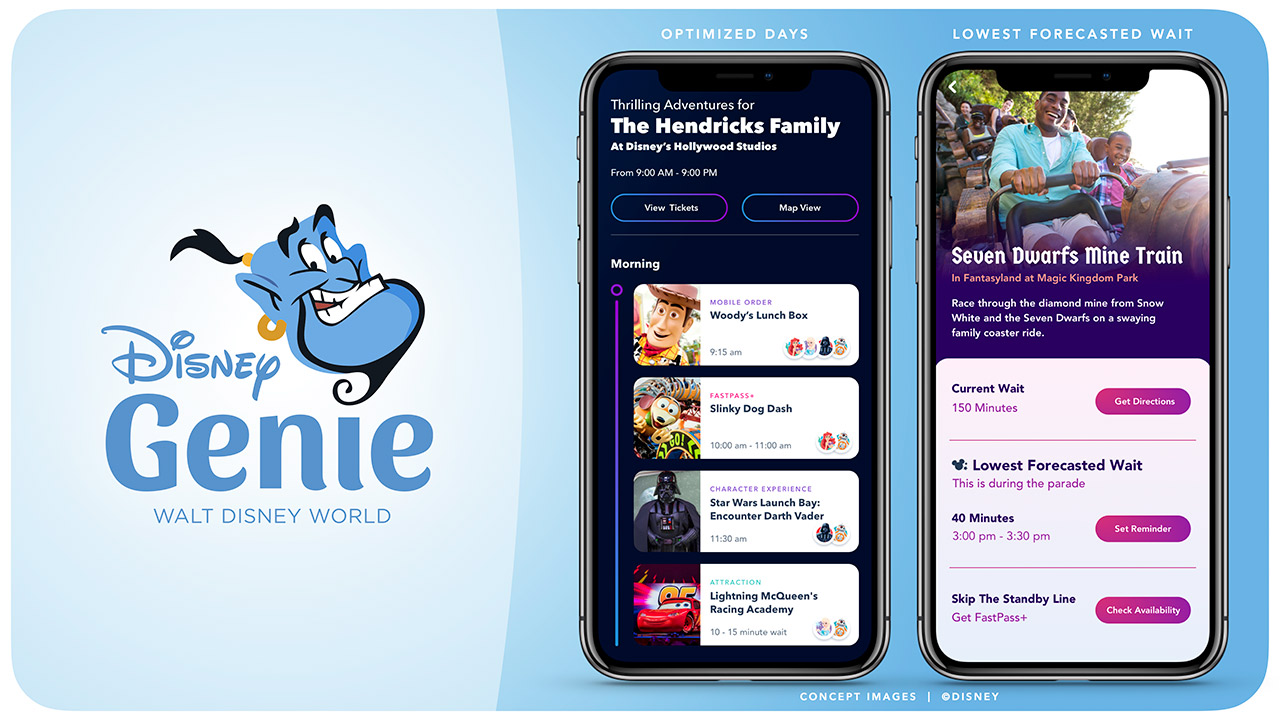 Disney Genie – Planned to debut in late 2020, Disney Genie will be a new digital offering to enhance the way guests plan for and experience a trip to Walt Disney World Resort. Disney Genie promises customized itineraries geared to princesses, thrill seekers, foodies, families, etc. Disney Genie will even have built-in efficiency capabilities, and will quickly evaluate millions of options to present an optimal day.

If you’re naive or new to Walt Disney World, you might think Disney Genie will eliminate the need for planning sites like this one. Hahahahahahahahahahaha! Those are mighty high hopes to have for the company that gave us My Disney Experience, an app that still feels like it’s beta-testing software some 7 years after it debuted. If this Disney Genie software works as promised, it could be great. I’ll believe it when I see it. 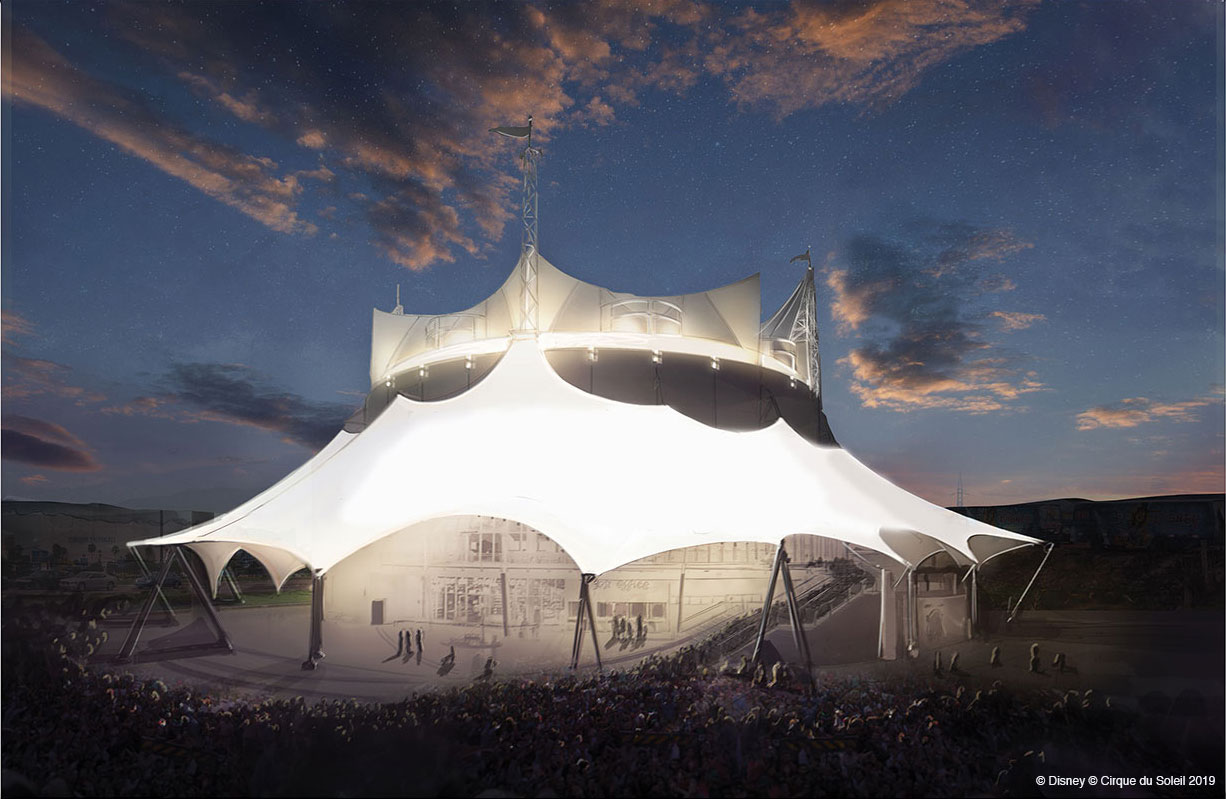 I have somehow gone my entire life without ever seeing Cirque du Soleil, and this is not because I have anything against the idea. Truthfully, I have no good reason at all. I think Cirque du Soleil looks really cool in all the videos/promotional footage I’ve seen. I really want to attend a performance of Cirque, and this version sounds right up my alley. I’m super excited for this. 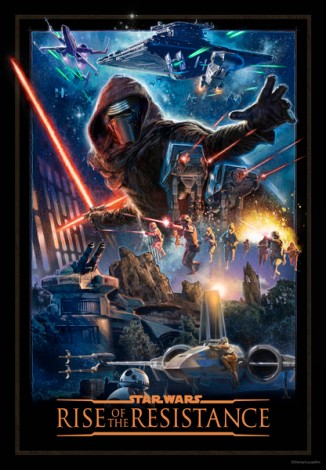 Sorry, but no commentary from me here. I’m am vehemently against spoilers in attractions, and the moment Bob Chapek started talking about this, I zoned out–and I looked down while the video was playing. Everyone else seemed really excited by this, but I didn’t want to ruin what is currently my most anticipated Disney attraction for myself! 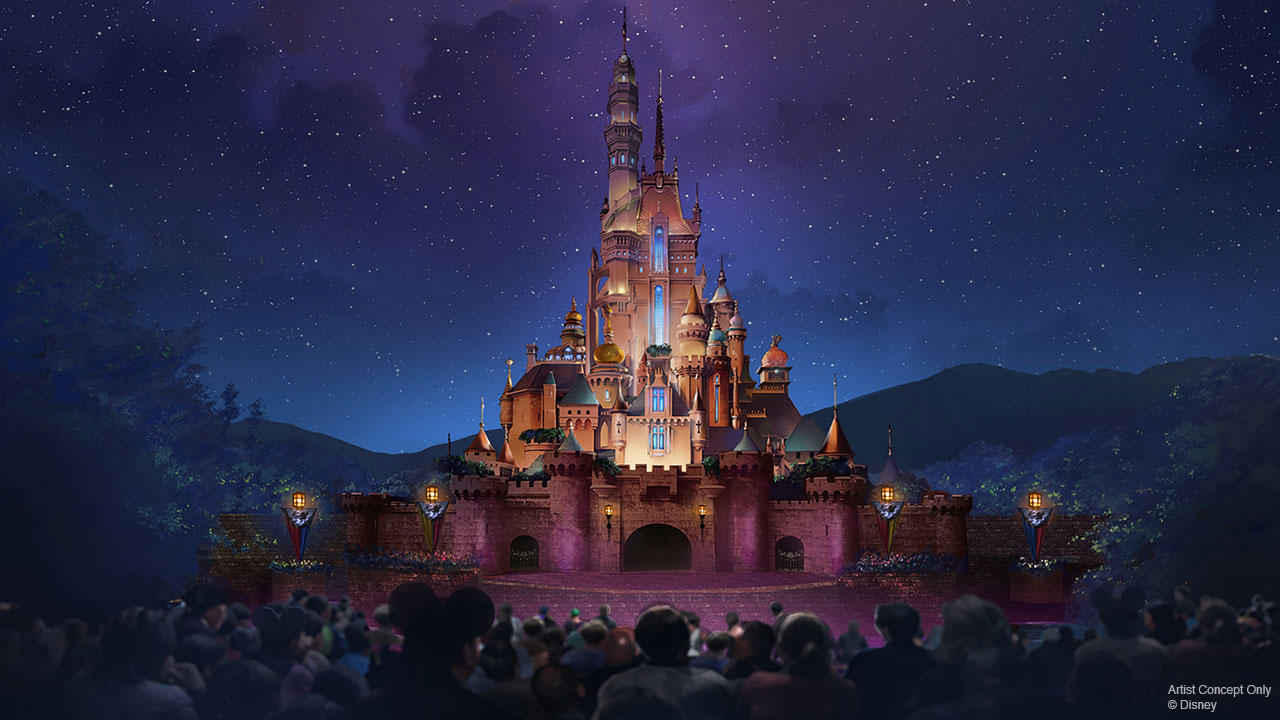 New Castle of Magical Dreams – This newly enlarged castle at Hong Kong Disneyland will “stand as a shining beacon of courage, hope and possibility.” Castle of Magical Dreams draws inspiration from 13 beloved Disney stories featuring princesses and heroines. The structure will feature adornments like Snow White’s apple, Cinderella’s coach and Belle’s rose as well as original artwork and sculptures.

We recently covered the construction progress on Castle of Magical Dreams here. I’ve long been skeptical of this, but a larger castle makes sense for the region, as does the seemingly awkward name. The look of this is actually growing on me, and it appears less visually busy and jarring in both the concept art above and the new model that was on the show floor. We’ll see! 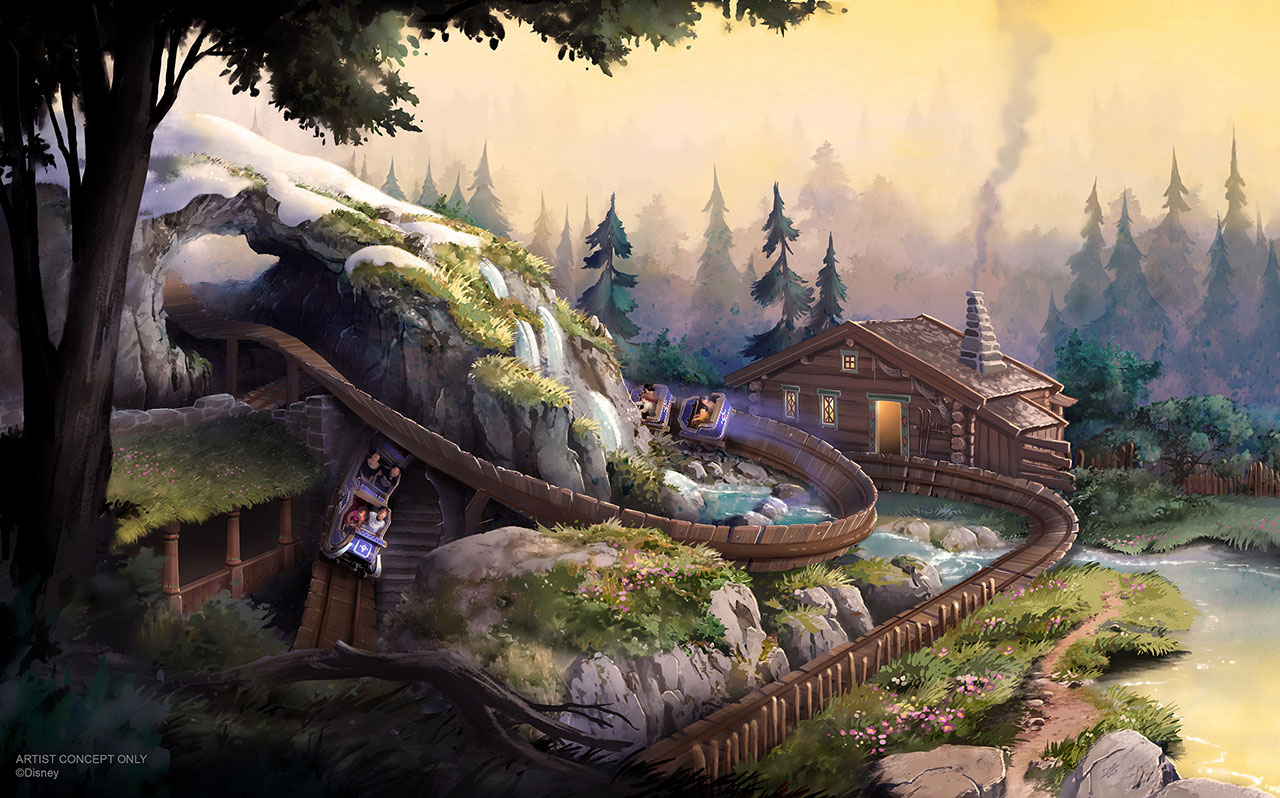 Frozen Land – Two attractions are coming to the Frozen-inspired land at Hong Kong Disneyland: a one-of-a-kind coaster called Wandering Oaken’s Sliding Sleighs and Frozen Ever After, based upon the Epcot attraction. Wandering Oaken’s Sliding Sleighs will take guests on a winding journey through Arendelle, beginning with a visit to Oaken’s infamous store. Then, Olaf and Sven help pull your sled to the top of the lift before sending you on your way.

Wandering Oaken’s Sliding Sleighs sounds and looks a lot like Seven Dwarfs Mine Train, but with Frozen. That’s totally fine by me–I think Seven Dwarfs Mine Train is a solid idea, albeit a tad light on show scenes. If Wandering Oaken’s Sliding Sleighs manages a bit more in the middle or end (and is maybe 30 seconds longer), I think it’ll be a solid addition to Hong Kong Disneyland. Ditto Frozen Ever After–the park definitely needs more dark rides. 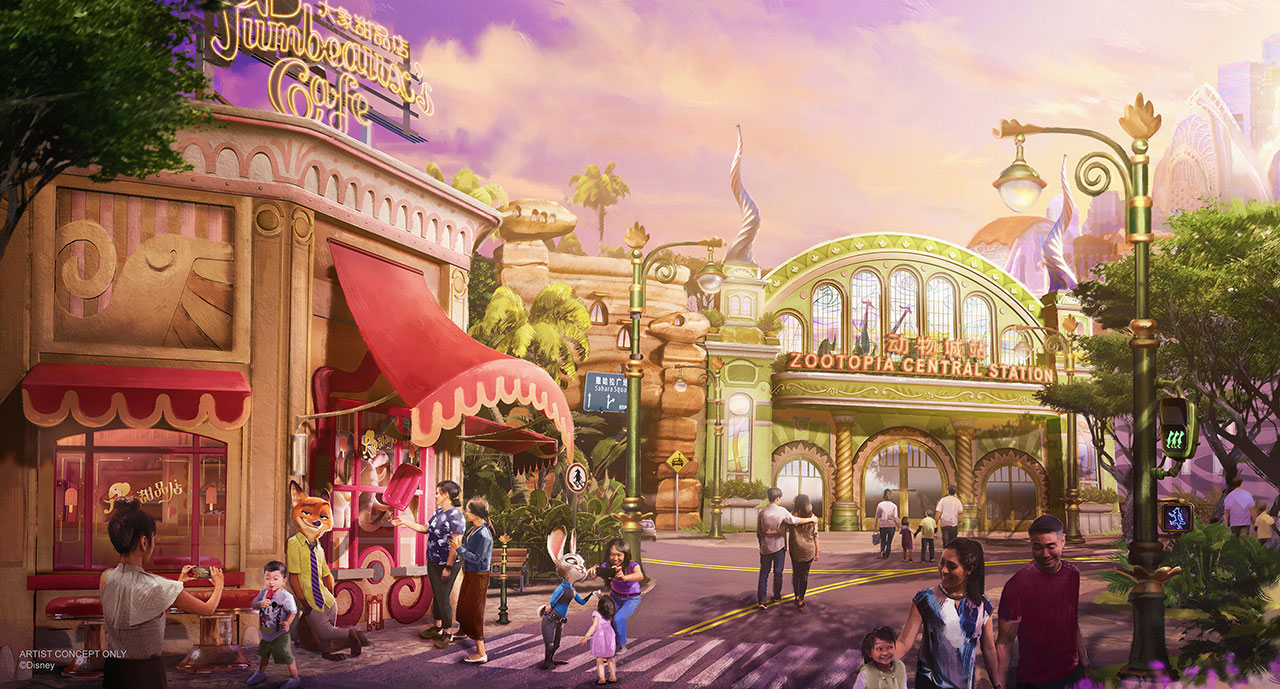 This should be really exciting news. Zootopia lends itself perfectly to a theme park, and I suspect the government-owned Shanghai Shendi Group is ensuring it has a healthy budget. However, with all of the recent strife with China, I’m not getting myself too excited for this. Who knows where things will stand ~3 years down the road when this opens. 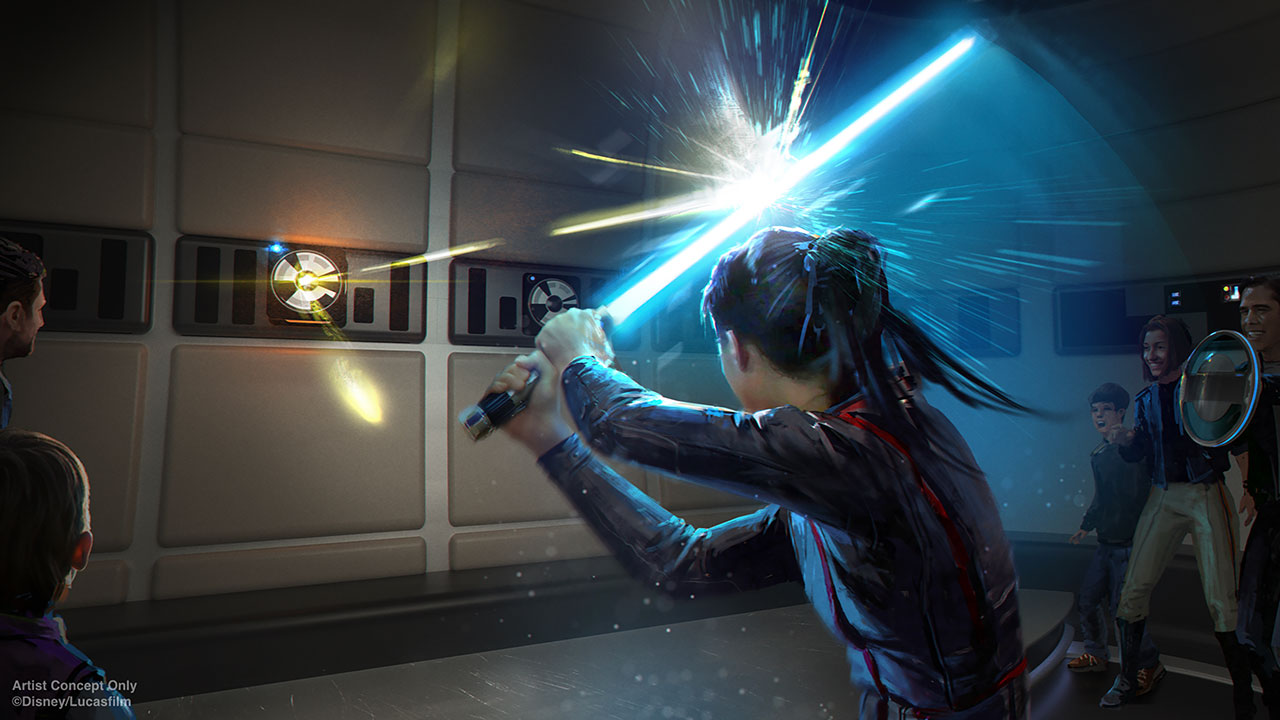 Star Wars: Galactic Starcruiser – The new Star Wars Resort at Walt Disney World will offer a two-night itinerary where all guests arrive and depart together, similar to Disney Cruise Line. Guests will cruise the galaxy in style aboard the Halcyon, known for its impeccable service and exotic destinations. Onboard, guests will stay in well-appointed cabins, experience onboard dining, make a planet-side excursion to Black Spire Outpost on Batuu, face off against a training remote while wielding a lightsaber, and more.

This all sounds really cool, but I question how much it’ll cost (contrary to “rumors” I don’t think a price can be set for an experience that’s ~2 years and a possible recession away), what it’ll include, and how much it’ll be scaled-back between now and opening–and again from opening to the one-year mark of operations. I love that Imagineering is aiming high with an ambitious and envelope-pushing project, but a lot here still remains to be seen. We have a full post about the Star Wars: Galactic Starcruiser Resort here.

The more I see of Epcot Forever, the more excited I get for that. With that said, I’m sad to see IllumiNations going and not being replaced by something that maintains its spirit. HarmonioUS looks a lot like World of Color, and the whole notion of a character-centric show on World Showcase Lagoon really makes me cringe. Part of me hopes that “due to guest demand” Epcot Forever becomes permanent, but I know they’re spending so much money developing HarmonioUS that this will probably never happen.

Epcot’s Future World New Neighborhoods – Finally, Epcot will be unified with four neighborhoods: World Celebration, World Discovery and World Nature (replacing Future World) plus World Showcase. Most notable among these changes is the more lush area around World Celebration, and the new three-level structure that’s (sort of) replacing Innoventions West and will will be the home base for Epcot’s signature festivals.

I offer a lot of commentary about this all in my Epcot’s Future World Being Replaced by 3 New Neighborhoods reaction post. To reiterate what I said there, I’m optimistic that this new area will embody a contemporary take on futurism, and give Epcot a much-needed shot in the arm. Additionally, I think the new names are stupid/pointless and would probably be much more critical of this all if it happened a decade ago, before the stagnation of Epcot really wore me down.

That should about cover it in terms of the 2019 D23 Expo announcements we haven’t covered elsewhere in stand-alone posts. This is a lot of announcements–more than I expected–but it’s also a lot that’s devoid of substance. As with the last D23 Expo, this feels like a ‘throwing a lot of stuff at the wall and seeing what sticks’ approach. Don’t be surprised if some of what was mentioned here doesn’t end up coming to fruition, especially the projects that have yet to commence construction. If Disney’s Star Wars: Galaxy’s Edge woes continue, Disney+ costs more than anticipated, or the economy heads south, we could see a handle of this projects put on ice.

What are your reactions to the various announcements at the 2019 D23 Expo? What has you most and least excited? Anything you’re hoping does not end up coming to fruition? Do you agree or disagree with our assessments? Any questions we can help you answer? Hearing your feedback–even when you disagree with us–is both interesting to us and helpful to other readers, so please share your thoughts below in the comments!