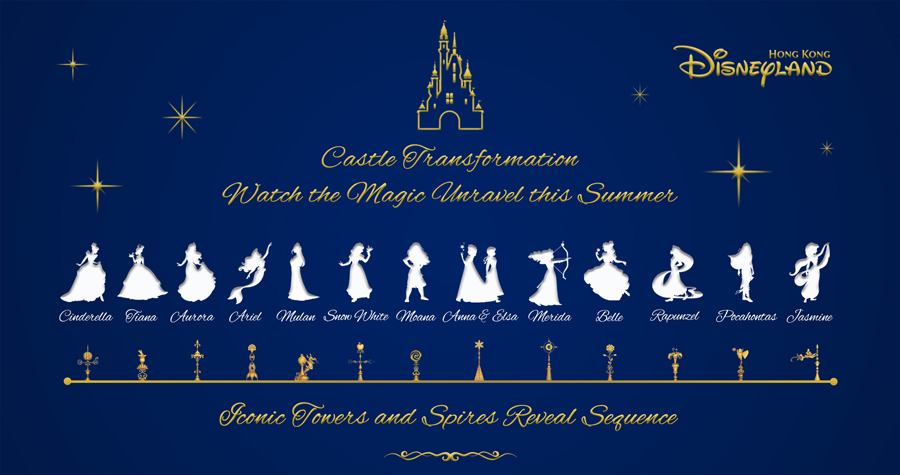 Disney first announced that it would transform and biggify (technical term) Sleeping Beauty Castle at Hong Kong Disneyland nearly 3 years ago, and progress has been fairly slow-going since then. However, today the project hit its biggest milestone, with thematic spires and towers starting to be installed.

These new spires representing 13 stories of beloved Disney Princesses and heroines will be lifted onto the castle base beginning today, and will dramatically increase the size of Hong Kong Disneyland’s castle, which presumably will no longer be called Sleeping Beauty Castle.

These new spires will celebrate Cinderella, Tiana, Aurora, Ariel, Mulan, Snow White, Moana, Merida, Belle, Rapunzel, Pocahontas, Jasmine, plus Anna and Elsa. The press release makes it sound like a big deal will be made of each tower/spire as it’s added (see the “Reveal Sequence” graphic above). When the transformed castle debuts next year, it will be home to a new daytime show and nighttime spectacular as well as a new outdoor stage area and viewing terrace…

As you might recall, this is part of a $1.4 Billion Hong Kong Disneyland Expansion that Includes Frozen and Marvel Lands, and other minor additions, too. Thus far, we’ve really only seen the minor elements: a kiddie Moana stage show in Adventureland and Buzz Lightyear Astro Blasters being re-skinned to Ant-Man and The Wasp: Nano Battle! The better-than-expected Iron Man Experience has also debuted, but that was technically prior to this expansion.

Shanghai Disneyland’s opening has siphoned guests away from the smaller scale park in Hong Kong, a reality that anyone could’ve seen coming long before Shanghai’s park even debuted. While I’m glad Disney is doing something for Hong Kong Disneyland, it sure seems like an interim fix could’ve launched last year or this year.

On the other hand, I think the substantive choices for the expansion make sense. Although I’ve heard nothing good about Ant-Man and The Wasp: Nano Battle, I don’t view that as a huge problem. It’s essentially just an overlay, and a minor attraction as compared to what will eventually open in Hong Kong Disneyland’s Marvel Land.

Imagine if Mater’s Junkyard Jamboree opened first in Cars Land while the rest of the area was under construction; fans would’ve torn it to shreds. However, as the third-string ride in Cars Land, it’s viewed as cute and fun. Same deal here. If the E-Ticket anchoring the land is as good as rumored, it’ll cause expectations to ease on Iron Man Experience and Ant-Man and The Wasp: Nano Battle!

Now opening in 2021, the Frozen Land will likely be called “Arendelle: World of Frozen” and will essentially be a Fantasyland expansion. It now has different attractions than originally announced, one is expected to be named Wandering Oaken’s Sliding Sleighs and the other, Frozen Ever After. (A leaked pitch suggested Frozen Ever After would be a clone of the Epcot attraction, but it’s unclear to us whether that was merely a placeholder description. Cloning the ride right down to the repurposed ride system would be a very odd choice.)

Wandering Oaken’s Sliding Sleighs is now a rollercoaster instead of a Mater’s Junkyard Jamboree clone, and will feature where trains of sleds through a family ‘storytelling coaster’ that appears similar to the Seven Dwarfs Mine Train at Walt Disney World and Shanghai Disneyland. Assuming at least some modifications are made to Frozen Ever After and the roller coaster actually has show scenes, this could be a solid–and much needed–addition to Fantasyland. 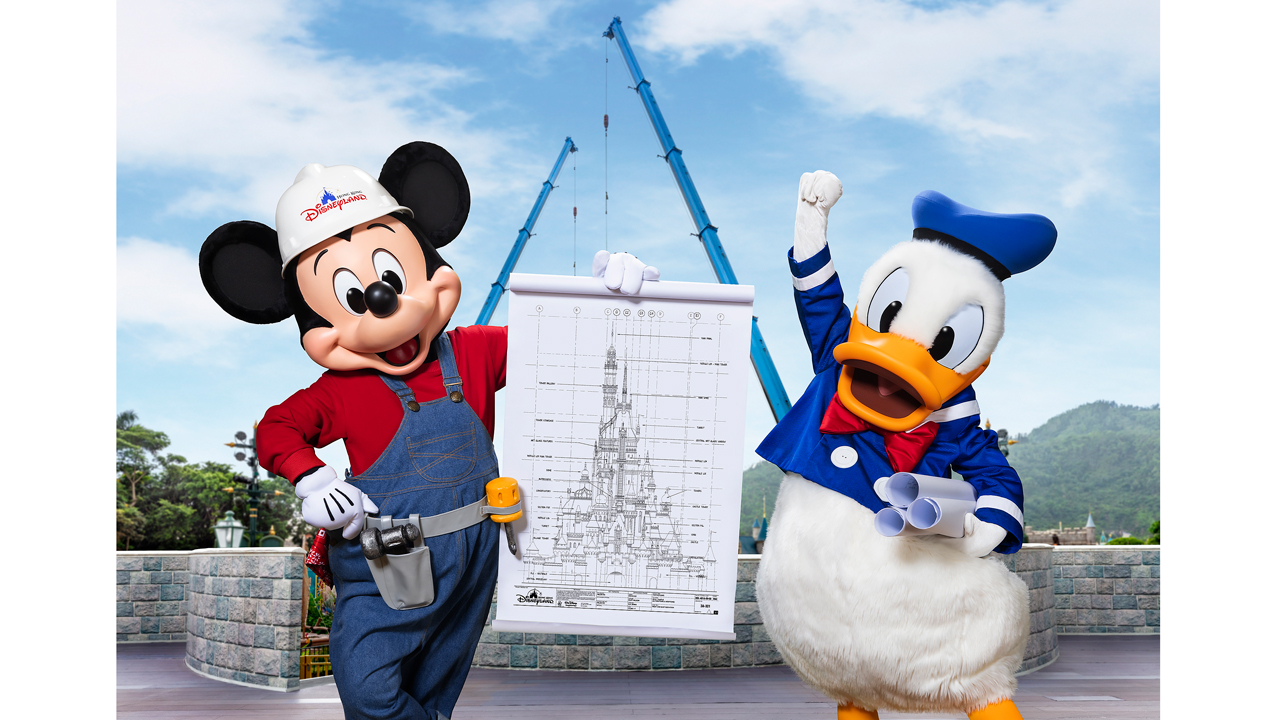 As for the new castle, eh. I don’t really know what to say other than it is what it is.

Since Disney avoided sharing any progress photos along with this announcement, let’s start with a video of construction progress as of today courtesy of Hong Kong Main Street Gazette–keep in mind that the spires you see in this video are all of the original Sleeping Beauty Castle:

In a perfect world where “everything Disney does is exactly to Tom’s tastes” I’d say this was a huge mistake. Sure, it would’ve been nice if Hong Kong Disneyland received an original castle design to begin with, but the Sleeping Beauty Castle clone was quaint and looked cool nestled against the mountains behind it.

However, once the colossal Enchanted Storybook Castle opened at Shanghai Disneyland, I think the writing was on the wall here. The target demographic for Hong Kong Disneyland probably isn’t looking for something intimate and charming. Enchanted Storybook Castle was designed as it was, and has been received so positively because it’s excessive and ostentatious, with a grandiose design ready-made for social media. 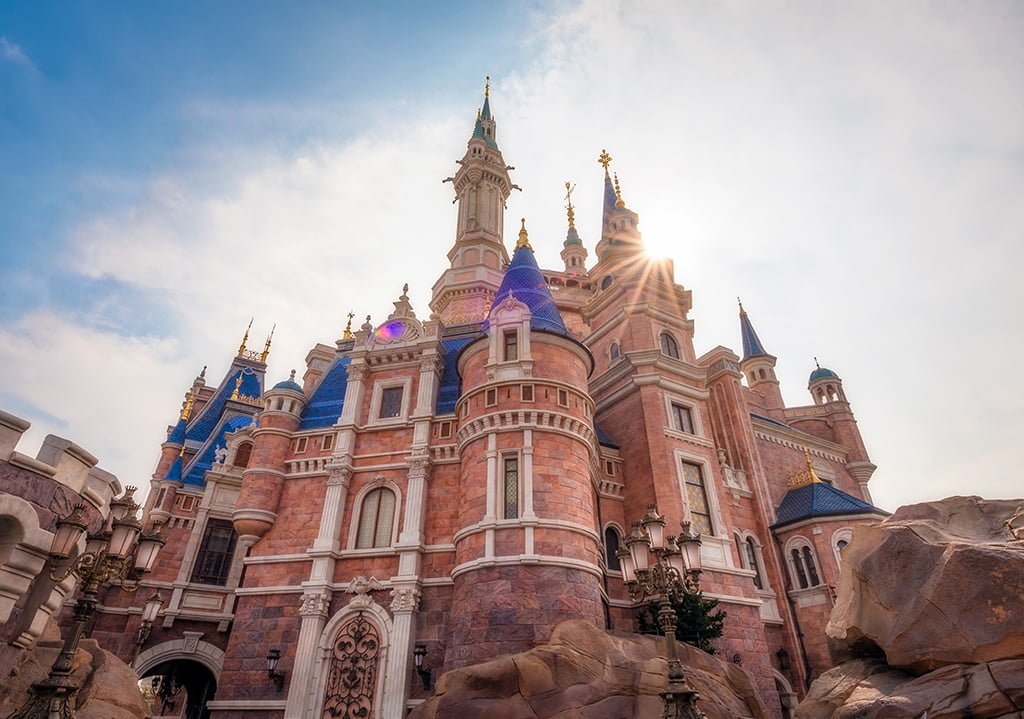 If Hong Kong Disneyland’s goal is to attract new guests who will spend big in the park, making the castle bigger and bolder is a sensible course of action. I really hate the whole “Disney is a business” refrain, but in the case of Hong Kong Disneyland, aggressive and business-savvy action was/is necessary to ensure that the park remains viable. I’m still holding out hope that that the finished product here looks like less of a mishmash than the concept art, but I get why this castle expansion project is being undertaken.

What do you think of the new castle plans for Hong Kong Disneyland? What about the rest of the $1.4 billion expansion? If you’ve visited the park, what do you like to do most at Hong Kong Disneyland? If you’ve never been to Hong Kong, does this make you interested in the park? Anything else to add? Any questions? Hearing from you is half the fun, so please share your questions and thoughts in the comments!