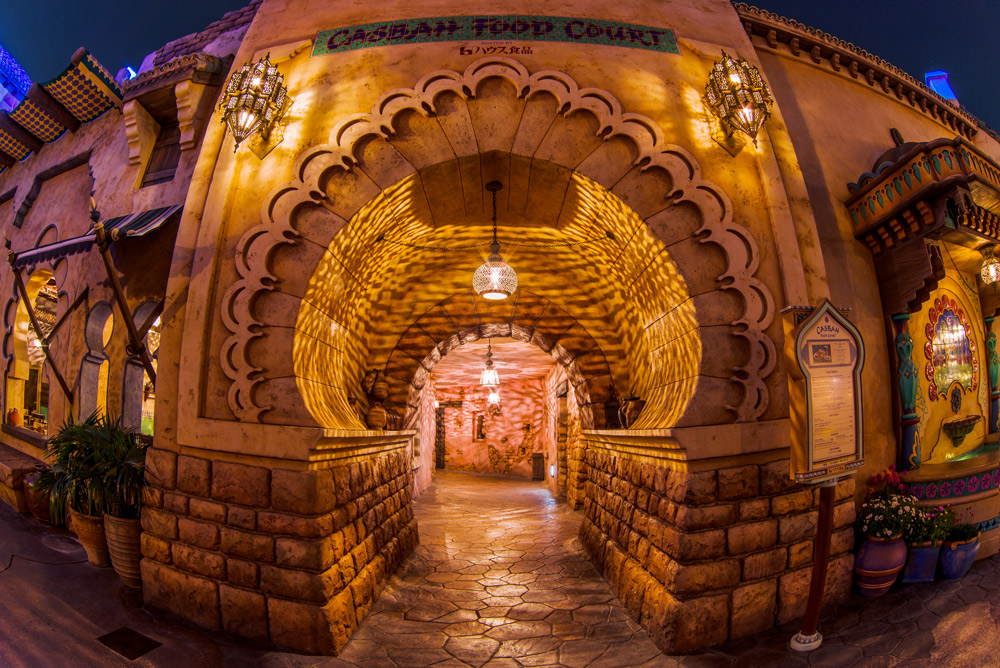 Casbah Food Court is a counter service restaurant located in Tokyo DisneySea’s Arabian Coast port of call. In this TDR dining review, we’ll share photo photos from our many meals here, how it stacks up to other restaurants in Japan, and whether you should include it in your 1-Day Tokyo DisneySea Itinerary.

Casbah Food Court is one of the largest restaurants at Tokyo DisneySea, with numerous large seating areas. Thanks to this, it doesn’t have a mess hall (or food court) vibe, and instead feels rather intimate. Casbah Food Court is also rarely crowded thanks to its location deep in the park, near international treasure Sindbad’s Storybook Voyage, one of the best Disney dark rides of all-time.

Since first publishing this review, we’ve dined at Casbah Food Court dozens of times. Literally. And, for some reason, I take photos of every single meal, despite the fact that the menu rarely changes. In our most recent update to this review in August 2019, I’ve gone back and added some of these new photos and additional thoughts…

Tokyo DisneySea’s official website describes Casbah Food Court as follows: “curry dishes served in these food stalls are very special because they are delivered from many parts of the kingdom using the flying carpet from the Disney film, Aladdin. Try out this exotic curry and feel like a hero from The Arabian Nights.”

While we didn’t see any magic carpets delivering our food, it wouldn’t surprise us if they were somewhere backstage given the level of detail at Tokyo DisneySea. The restaurant does feel like it could be a set straight out of a live action version of Aladdin. 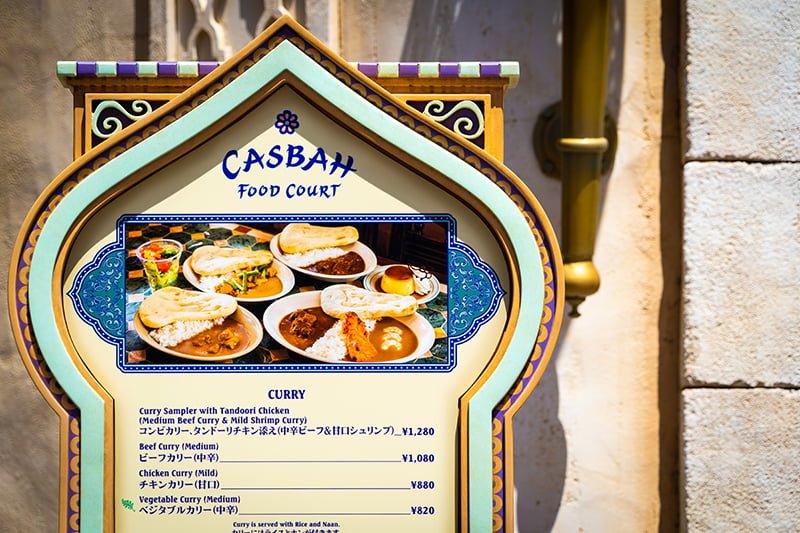 Above is the current menu at Casbah Food Court. This is more or less what it has been for the last several years, with the presentation changing slightly. 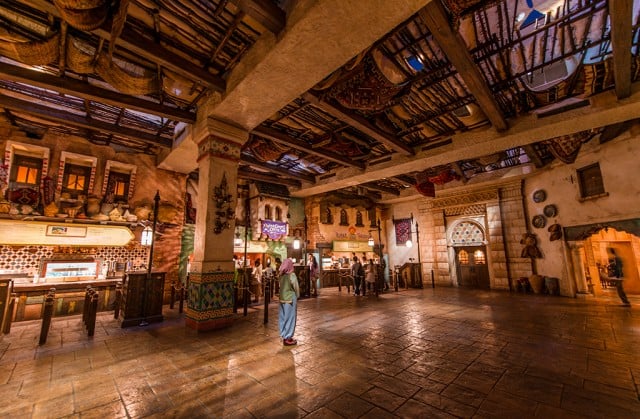 There are four ordering stations (hence the “food court” name) under a sort-of open air bazaar loosely covered by various fabrics, with each having their own look, but serving the same things. (Apparently, this restaurant used to serve more than just curry.)

The themed design is almost as impressive here as it is in Vulcania, which is another Tokyo DisneySea counter service restaurant that we highly recommend. Vulcania wows you by offering a dining location so improbable–inside of a mountain–that it’s sheer scope and scale as a whole are wow-inducing.

From fountains and fixtures to trim work and even tables and chairs, Casbah Food Court really succeeds because of these details. It’s particularly gorgeous at night, when the many light fixtures scatter light throughout Casbah Food Court, creating a wonderful mood and texture to the restaurant. 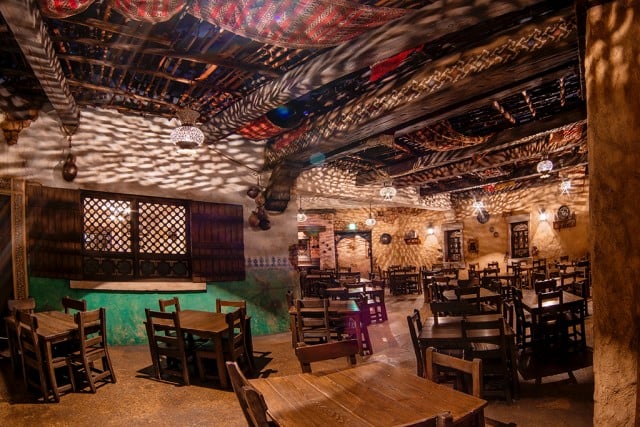 Although the entire restaurant is subdivided into around a half-dozen rooms, there are also two halves to Casbah Food Court: the marketplace and palace.

The marketplace is an extension of the bazaar that runs from Sindbad’s Storybook Voyage up until Casbah Food Court, and the royal palace side is an extension of the courtyard adjacent to the other entrance of Casbah Food Court. Using the restaurant as a transition point between the two very different areas of Arabian Coast is very clever. It also means the restaurant’s theme and interior design is fairly diverse. 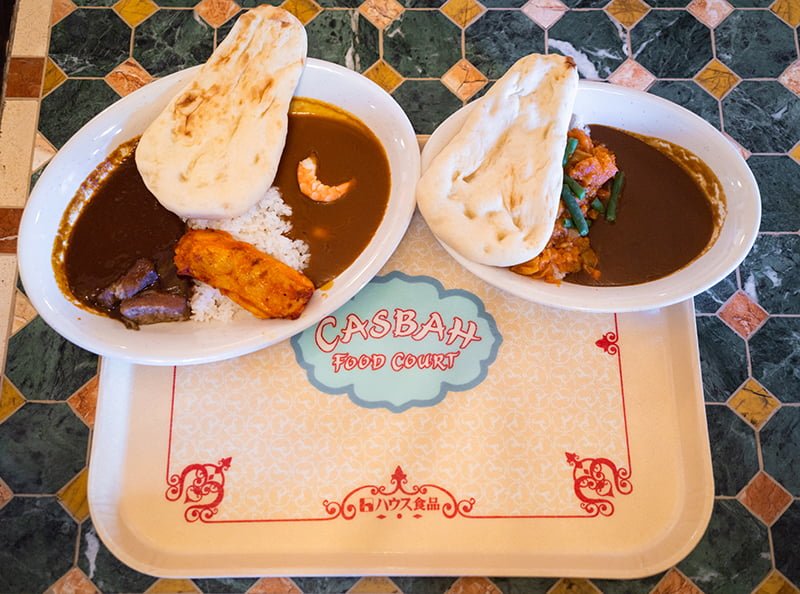 The food at Casbah Food Court is excellent–so long as you like curry!

This is one of the best meals you can have at Tokyo Disney Resort. It’s flavorful, filling, and ranks up there with some table service meals. 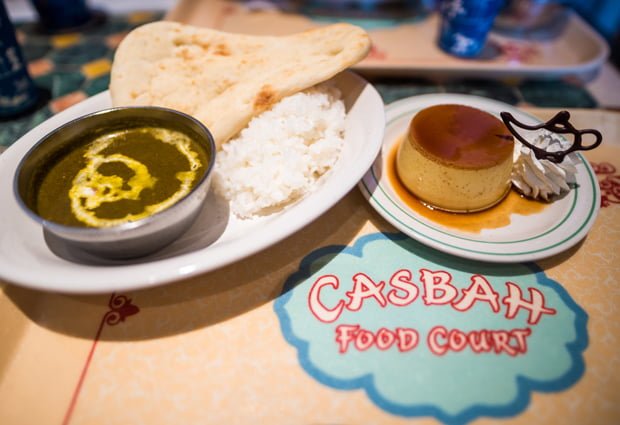 The Coconut Pudding dessert at Casbah Food Court is fantastic. 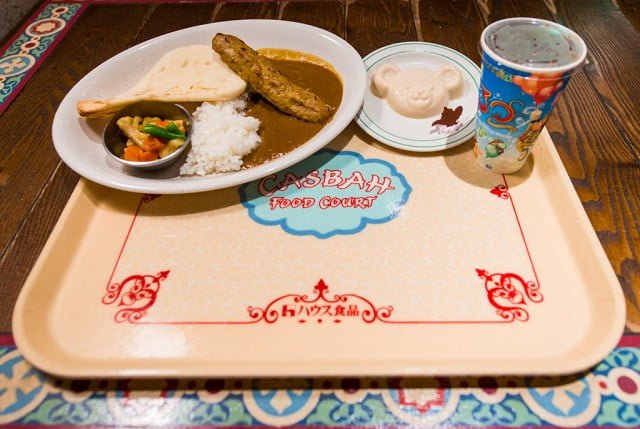 Here’s the “Special Set,” which costs around $15, and has a rotating dessert (and sometimes drink) available during different seasons.

Price-wise, I think this is reasonable given the portion size and since it includes a drink and dessert. Portion sizes at Casbah still aren’t “American-size,” but they are very close, and larger than the portions at other restaurants. 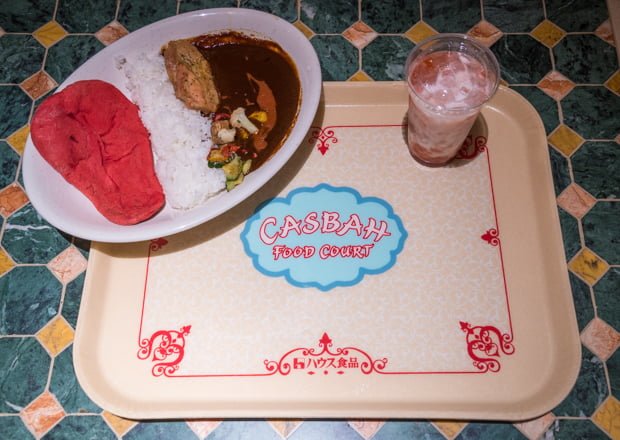 Here’s another special set, this time one served during the Halloween Season at Tokyo DisneySea. This one was themed to Jafar.

At Halloween, performers also sometimes appear in Casbah Food Court, doing magic tricks and other hijinks. Unlike most Tokyo Disney Resort entertainment, these performances are entirely in Japanese, but you can get an idea of what’s going on via the visuals. 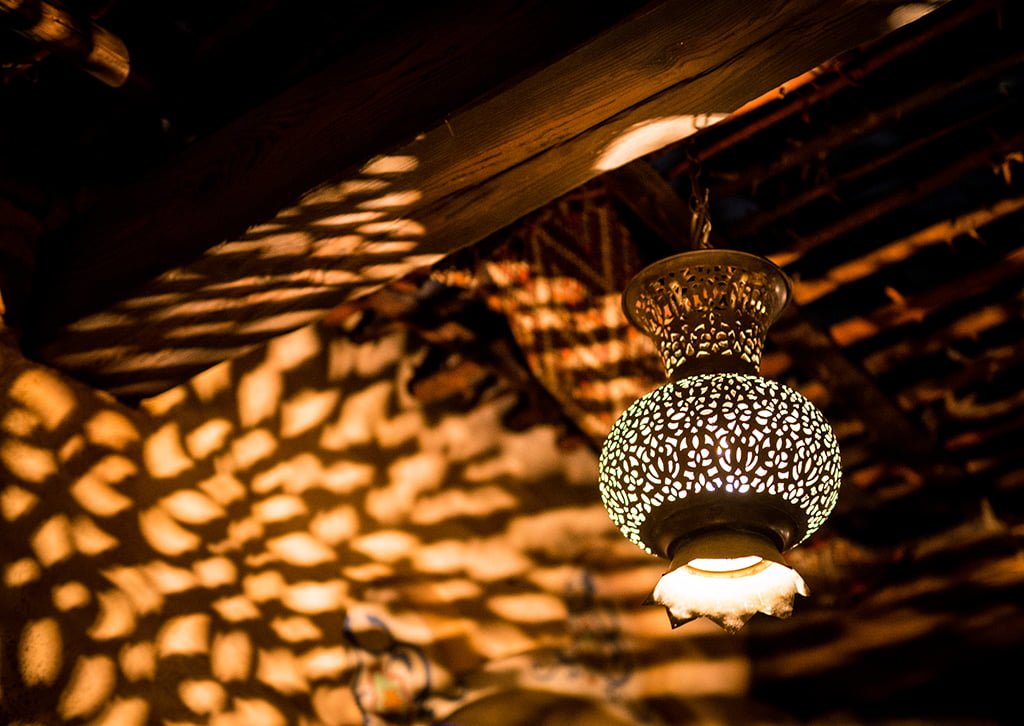 No matter when you dine at Casbah Food Court, it’s a good experience. We tend to favor dinner here, as it’s a nice respite from the crowds that can be found at Tokyo DisneySea’s front-of-the-park restaurants. We also like the ominous atmosphere and texture created by the light fixtures scattering light around the rear seating areas of Casbah Food Court.

Overall, Casbah Food Court is another must-do restaurant at Tokyo DisneySea. We would encourage everyone to give this restaurant a try, even those who are sort of “meh” about curry. The food here is top-notch, and we suspect that anyone who is not vehemently opposed to curry will enjoy their meal at Casbah Food Court. This ranks as our #3 buffeteria/counter service restaurant at Tokyo DisneySea in terms of theme and ambiance, and #1 in terms of cuisine.

Have you dined at Casbah Food Court? How would you rank it among the counter service restaurants at Tokyo Disney Resort? Does eating here appeal to you? Do you agree or disagree with our review? Any questions? Hearing your feedback–even when you disagree with us–is both interesting to us and helpful to other readers, so please share your thoughts below in the comments!