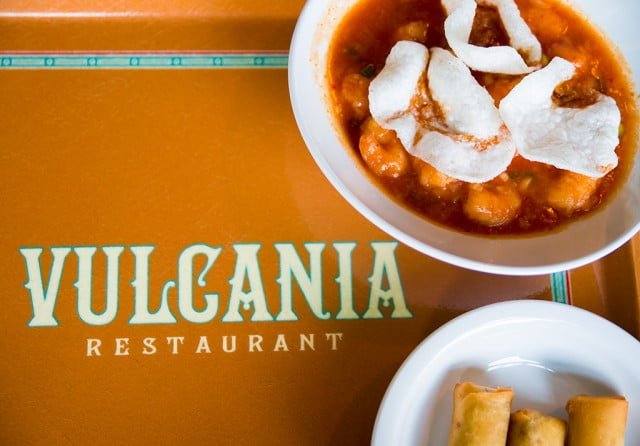 Chief among these is the 20,000 Leagues Under the Sea ride itself, an extinct Magic Kingdom attraction that is still mourned by longtime Walt Disney World fans. While it closed over 15 years ago (under arguably dubious motivations if you’ve read DisneyWar) and has since been replaced by New Fantasyland, it’s still beloved. For good reason, as photos of the vibrant lagoon from the Skyway are beautiful and iconic.

Fortunately, the legacy of 20,000 Leagues Under the Sea has been carried forward with new attractions and offerings. One of the more under-the-radar instances of this is the absolutely brilliant Vulcania restaurant, which is named after the secret island port of origin for the Nautilus and Captain Nemo’s land-based hideaway…

Vulcania is a buffeteria-style restaurant in the Mysterious Island at Tokyo DisneySea serving Chinese food. In this dining review and overview, we’ll start with a few photos of Vulcania, cover its backstory and theme, and conclude with thoughts on the cuisine.

Let’s take a look inside, starting with the buffeteria ordering lines and pay stations… 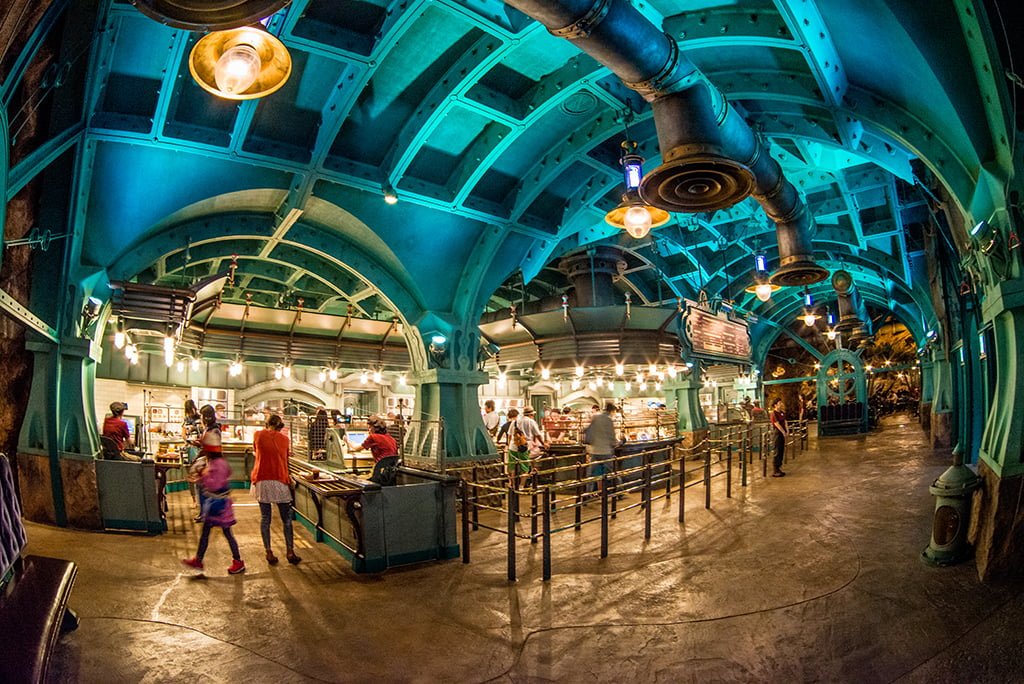 In terms of backstory and theme, Vulcania originally served as a geothermal station carved out of the the side of Mount Prometheus by Captain Nemo. It has since been converted into a mess hall that serves the hardworking crew from 20,000 Leagues Under the Sea who now work on scientific endeavors on the island.

It’s not totally clear whether the geothermal station is still active and the mess hall just shares space with it, or if it is a fully repurposed space. There are ample signs to suggest Vulcania serves dual functions, namely the coils and other means of harvesting and generating power. 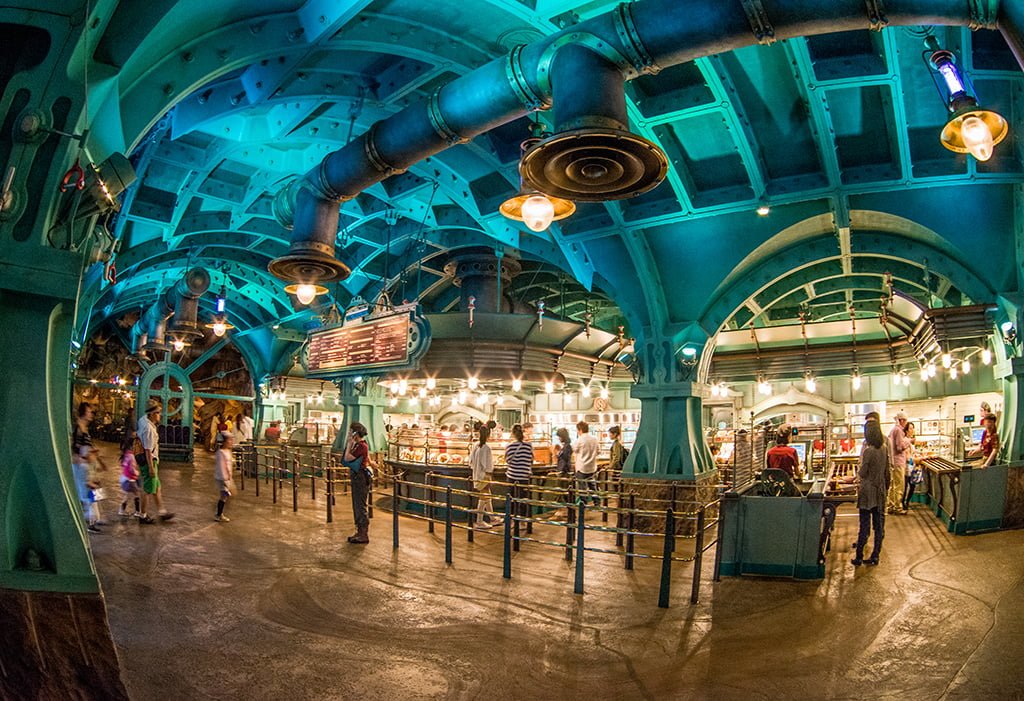 The coils and generators are nice kinetic touches that also call guests’ attention to the possibility that “something more” is going on with Vulcania. Without these effects, the vast majority of guests probably wouldn’t give much second thought to the restaurant’s story–it’d just be a cool space carved into a volcano cave. Even with these added details, that’s probably how many guests view Vulcania.

Regardless of guest perception of backstory, the atmosphere is incredibly convincing and compelling. The order area has a cold, industrial feel and the indoor seating area looking like it’s literally carved out, with support beams holding the whole place up and parts of the geothermal station littered throughout the restaurant. 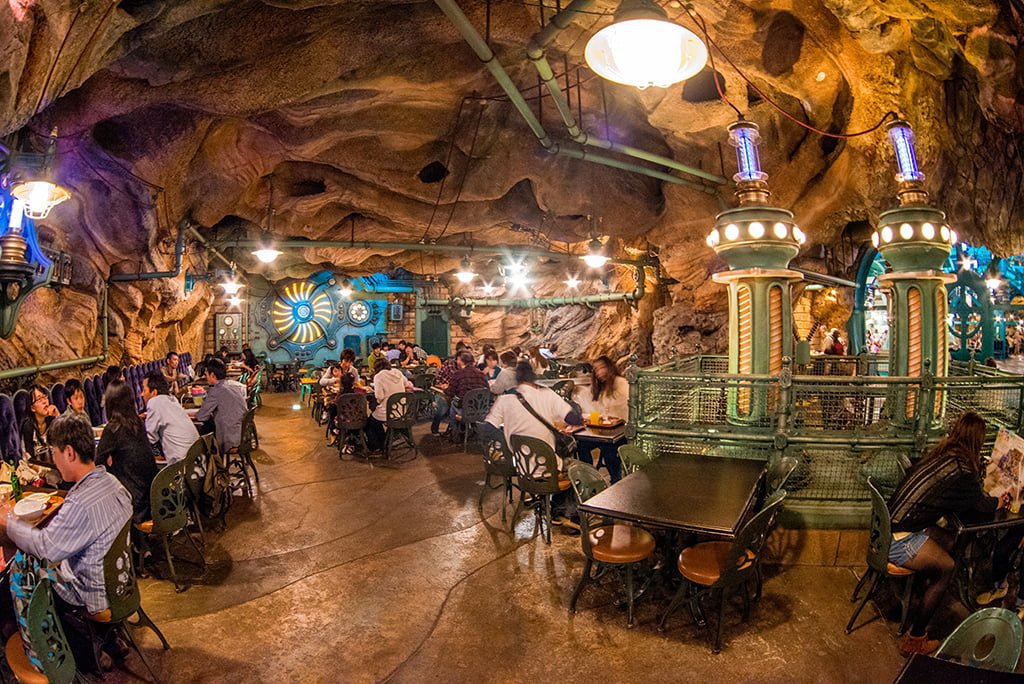 Like most of Mysterious Island, it represents the intersection of humanity and nature, and our sometimes feeble attempts to harness the latter. This is evident via the large transformers, power devices, and man-made walls supporting the dining area that has been cut out of the mountain. 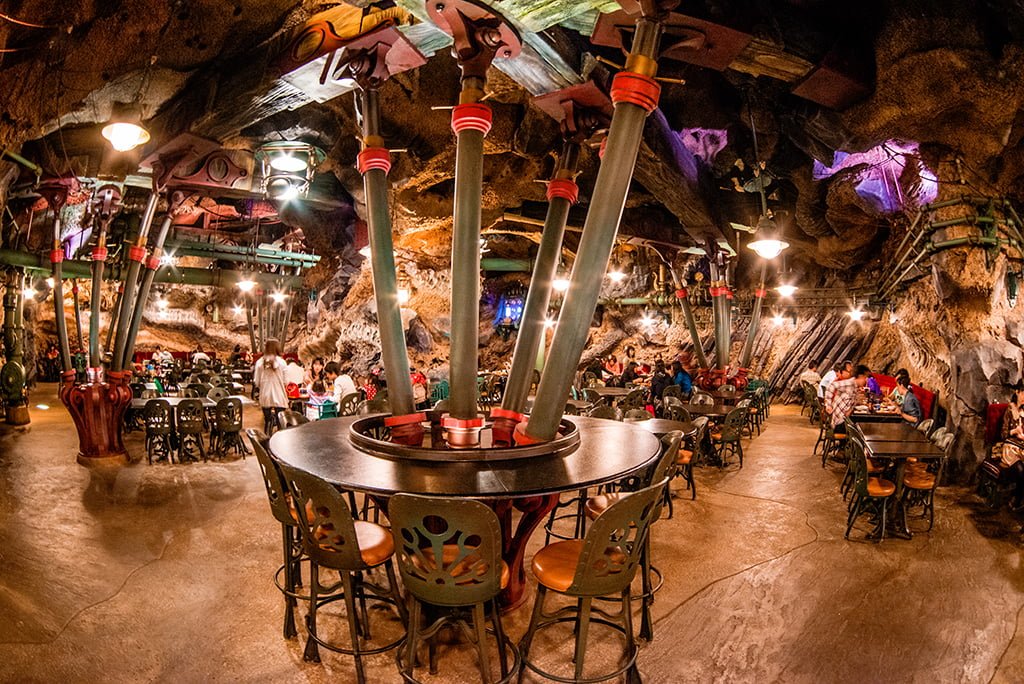 The level of detail in a counter service restaurant is absolutely mind-blowing. Right down to the design of the chairs, hefty restroom doors, and drink filling station–every inch of this space is meticulously-designed. Photos do not even begin to do it justice.

Imagineering has something of an obsession with power generation, and it’s fun to see how that plays out in different parks around the world. (For Walt Disney World fans, there’s also a fun Easter Egg: Vulcania’s background music borrows heavily from the Living Seas loop.) 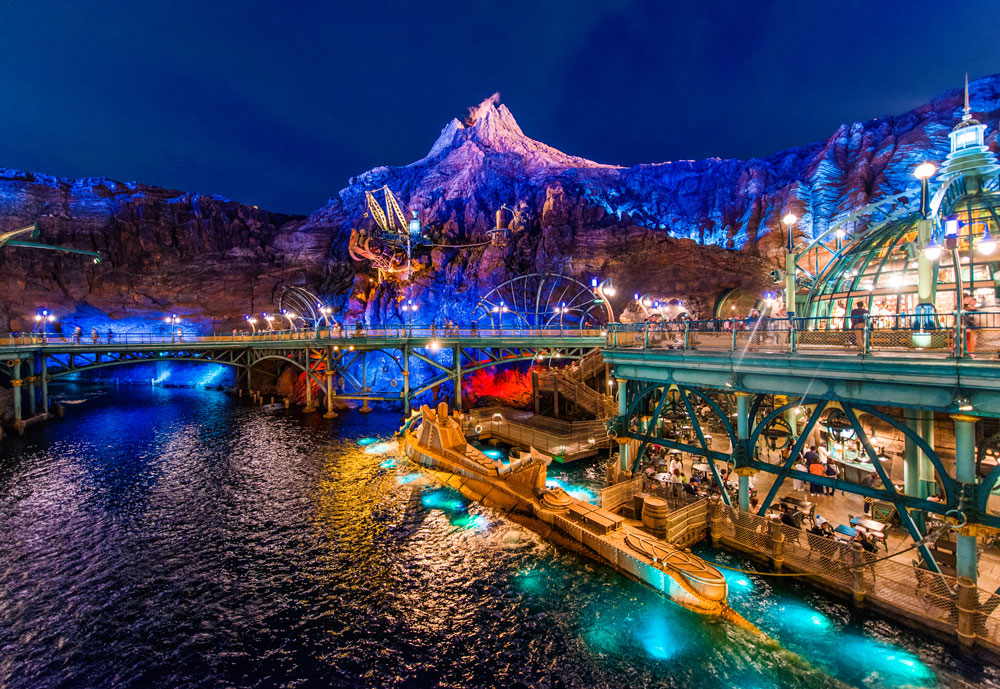 In addition to the indoor seating areas flanking each side of Vulcania, there is also an open air seating area at the edge of the restaurant that looks out onto Mysterious Island. From here, you can actually see a docked Nautilus out in the harbor below, which connects the restaurant nicely with its overarching ties to 20,000 Leagues Under the Sea.

Mysterious Island is a true triumph of Imagineering, and one of the pinnacles of Tokyo DisneySea, which is a theme park of non-stop high points. We could gush about this port of call at length, but will instead stay focused on Vulcania here. Stay tuned for a standalone post about the thematic brilliance of Mysterious Island. 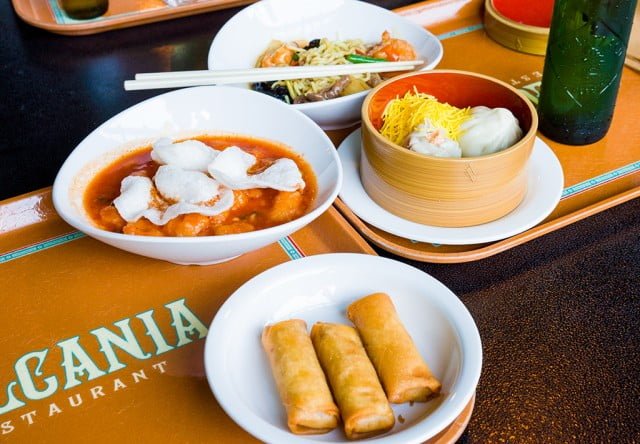 In terms of food, Vulcania is excellent. We’ve dined here several times over the years, and the menu hasn’t really changed much in nearly a decade. There are occasionally new special sets, but it’s been one of the most constant restaurants at Tokyo DisneySea.

An average “American-sized” meal at Vulcania is going to cost roughly the same price as a counter service meal in the United States Disney theme parks, but the food quality is significantly better at Vulcania. If this were a restaurant at Walt Disney World, its cuisine would probably be fairly compared to a low to mid-end table service restaurant in terms of quality. 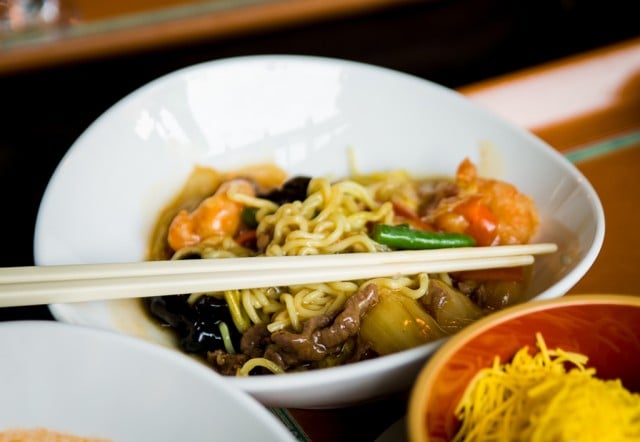 In case you’re unfamiliar with buffeteria-style, think back to grade school lunch, where you’d walk through a line and pick certain items (price a la carte) to make up your meal.

The sets are essentially combinations of appetizer, entree, and dessert that come together at a more alluring price than a la carte. At Vulcania, we frequently order one set plus a couple of a la carte items to share between the two of us. The final cost typically ends up being around $12 per person. 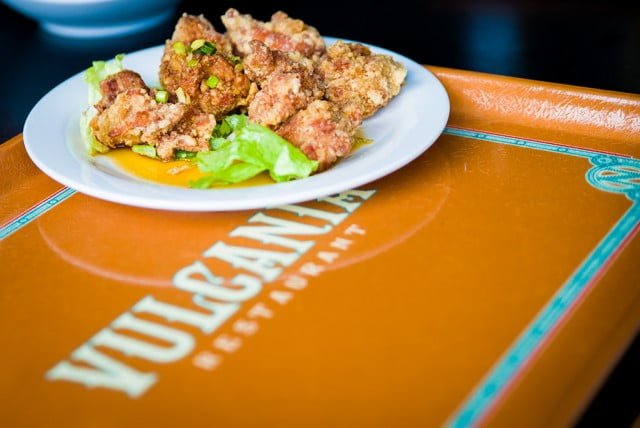 It’s very “basic,” but I’m a total sucker for the fried chicken. The meat is always tender and juicy, and the sauce provides a nice tang.

This is my go-to item that I order about half the time at Vulcania (plus sides). 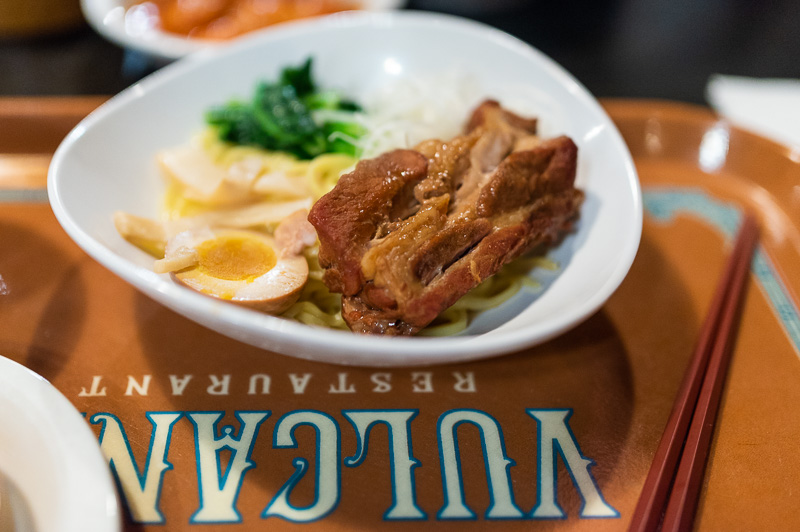 The fried rice is also a good option, albeit nothing particularly imaginative. 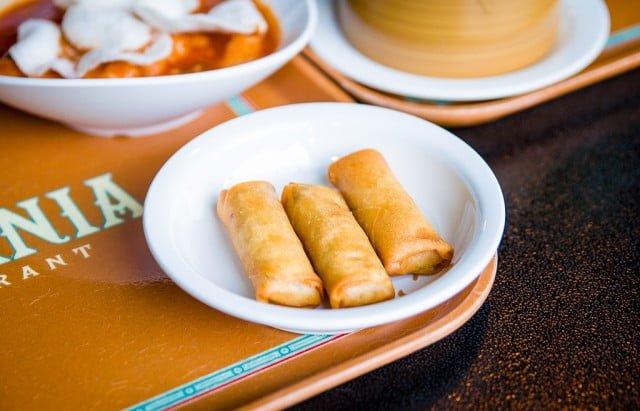 At the other end of the spectrum, we’re not particularly keen on the shrimp in chili sauce, dim sum, or spring rolls.

None are particularly bad, they’re just mediocre as compared to these same options elsewhere in Japan or Tokyo Disney Resort. 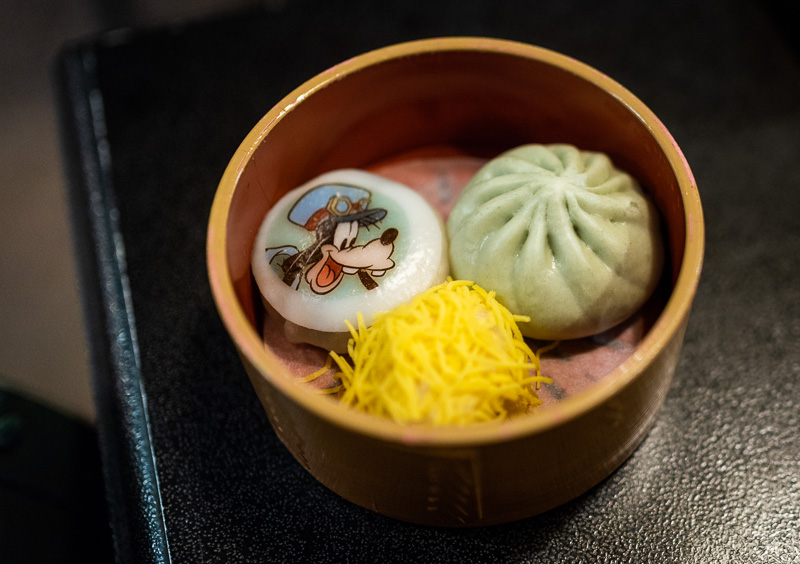 Overall, Vulcania is not to be missed. The food is mostly approachable to American palates, as it’s basically just comfort food. Even if you’re not a huge fan of Chinese food, you need to at least have a dessert or some fried chicken here if you’re in Tokyo DisneySea due to the level of immersion and design.

This is especially true if you’re an old school Walt Disney World fan with fond memories of the 20,000 Leagues Under the Sea attraction, or enjoy the works of Jules Verne. Thematically, this is the best counter service restaurant at Tokyo DisneySea, which is saying a lot considering that Casbah Food Court (the #1 overall pick on our Top 10 Tokyo DisneySea Counter Service Restaurants List) is also incredibly strong thematically and slightly better on the food front.

What do you think of Vulcania’s theme? If you’ve dined at Vulcania, what did you think of the food? Do you agree or disagree with our thoughts on this 20,000 Leagues Under the Sea inspired eatery? Any questions? Hearing your feedback–even when you disagree with us–is both interesting to us and helpful to other readers, so please share your thoughts below in the comments!