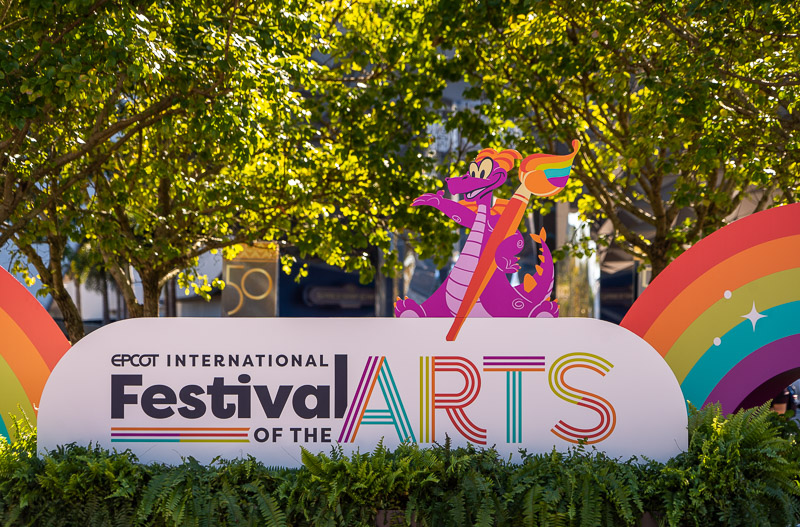 The 2022 Epcot International Festival of the Arts is back in full form, proving once again why Walt Disney World’s first event of the year is also Epcot’s best fest. This review shares photos and impressions of the winter celebration, with thoughts on crowds, entertainment, and more.

It’s hard to believe this is the 6th year of the Epcot International Festival of the Arts. I still remember visiting for the inaugural Epcot Festival of the Arts. We went in with low expectations because Disney had announced next to nothing about the event in advance. It was thus shocking to experience something really good and really polished from its debut year.

The last 5 years have built upon that, making Festival of the Arts our favorite Epcot event. It surpasses even Festival of the Holidays, and Christmas is otherwise our favorite time of year at Walt Disney World. It’s also ahead of the event that follows it, Flower & Garden Festival, and is way above Epcot’s flagship Food & Wine Festival, which we view as the weakest offering of the year…

One of the reasons the Epcot Festival of the Arts is so much better than Food & Wine Festival is that the former is far less reliant on spending extra money on overpriced cuisine. While Disney PR and blogs follow the familiar formula of emphasizing the Food Studios, Epcot’s Festival of the Arts has never depended upon buying anything to have a good time.

If you are going to make a purchase, a small piece of art–even a postcard–from a gallery is a much better idea. With that said, if you do buy savory snacks or decadent desserts from the Food Studios, they’re typically tastier and better looking than what’s served at Food & Wine Festival. With less guest demand and shorter lines, booths can take a bit more time with ambitious dishes, rather than being focused on churning items out as quickly as possible. 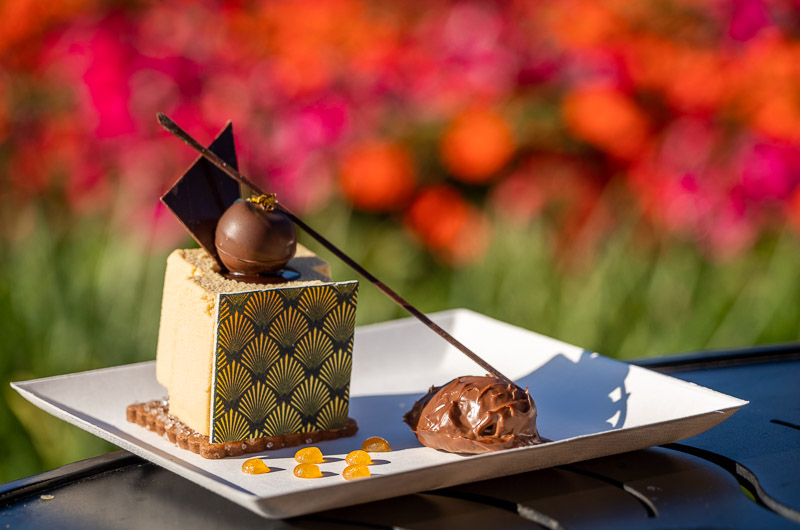 Every year, my fear is that Walt Disney World will “wise up” to this. That management will cut back on the entertainment and exhibits that cost money, reduce the number of atmospheric artists, or cut corners on the dishes at the Food Studios to increase margins.

And every year, I find myself breathing a sigh of relief when that turns out to not be the case, and instead Disney adds more to the event. At this point, I’m fully convinced there’s a fan of the Epcot International Festival of the Arts somewhere high up in Walt Disney World management, because the event always goes the extra mile as compared to Epcot’s other offerings. 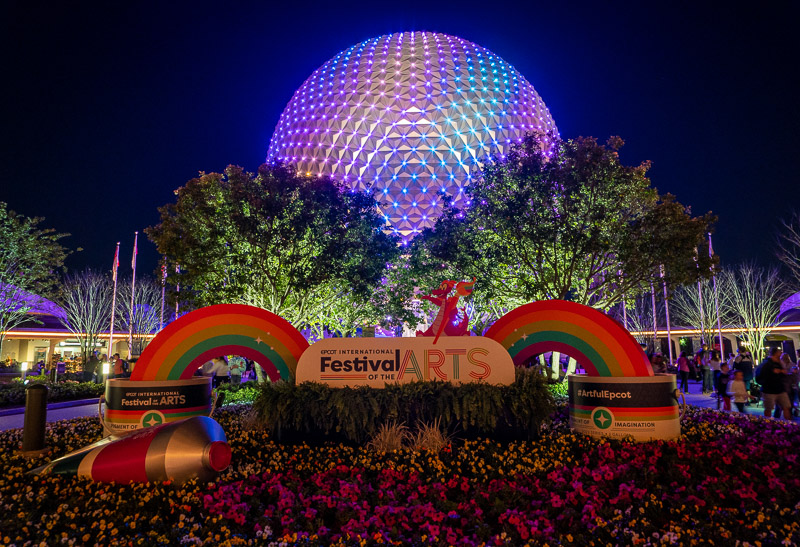 Speaking of adding things to the event, let’s start with what’s new. The big thing this year is a new “version” of the Beacons of Magic, which we’ve called a highlight of Walt Disney World’s 50th Anniversary. This is already the second time Imagineering has done this, with the first being a good–but short–segment for Festival of the Holidays.

For the 2022 Epcot Festival of the Arts, Imagineers have brought the Muppets performing “Rainbow Connection” to Spaceship Earth. This brand new light show features color and rainbow motifs, and is significantly longer. 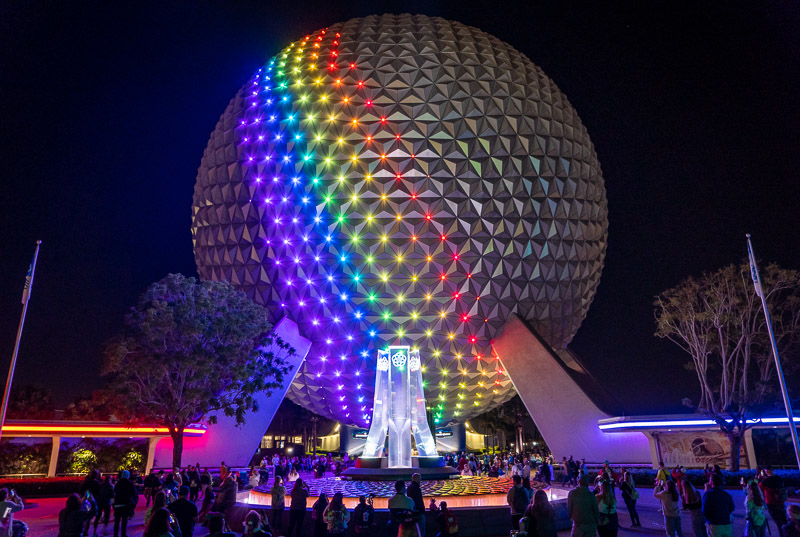 Otherwise, this Beacons of Magic segment is absolutely awesome and deserves way more praise and attention. We Walt Disney World fans (rightfully) call the company out for making cuts and taking little things away that pack a power punch and are meaningful to the guest experience. Likewise, we should offer praise when similar additions are made–and this unquestionably qualifies. 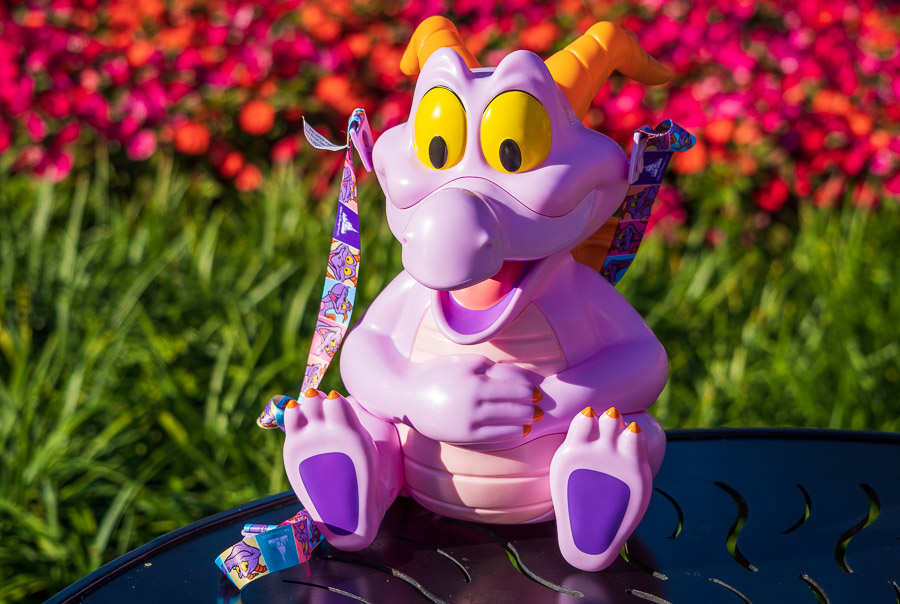 The higher profile addition to the 2022 Epcot Festival of the Arts is the “infamous” Figment popcorn bucket, which drew 5+ hour lines during the opening day of the event. This story really blew up, trending on social media and even making the mainstream news.

Last we saw, the Figment popcorn bucket was sold out at the Pop Eats booth. We assume it’ll come back in stock at some point, but who knows when that’ll be given all the supply chain woes. For those who have asked, we still haven’t acquired one, as the line has never been <30 minutes during our visits, which is my absolute max for any merchandise. (No judgment on those who waited longer–to each their own!) 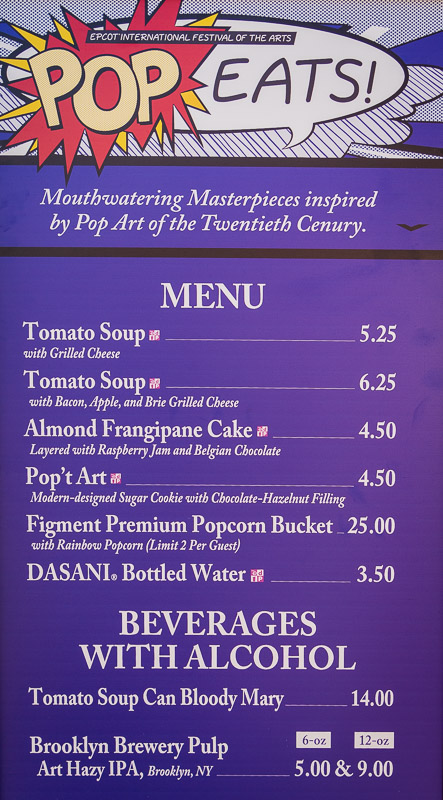 On the plus side, waits are now significantly shorter for the food itself–and Pop Eats has a surprisingly strong lineup of comfort food. While we don’t yet have a current booth review for Pop Eats, our recommendation would be ordering the second Tomato Soup and Mondrian-inspired Almond Frangipane Cake. 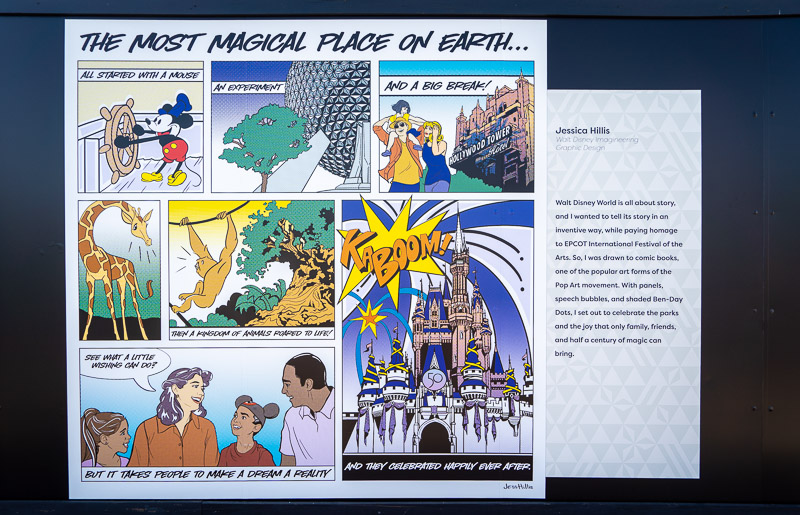 If you’re on a tighter budget, we’d encourage you to skip pretty much everything at the Food Studios. There are delicious items, but they’re also overpriced across the board, even by Walt Disney World standards. You really won’t be missing much and can still have a blast!

A big part of this is probably that this is a creative event by creatives. While Imagineers probably don’t take much of a personal interest in any other festival, this could very well be a passion project for many Disney employees and Cast Members. 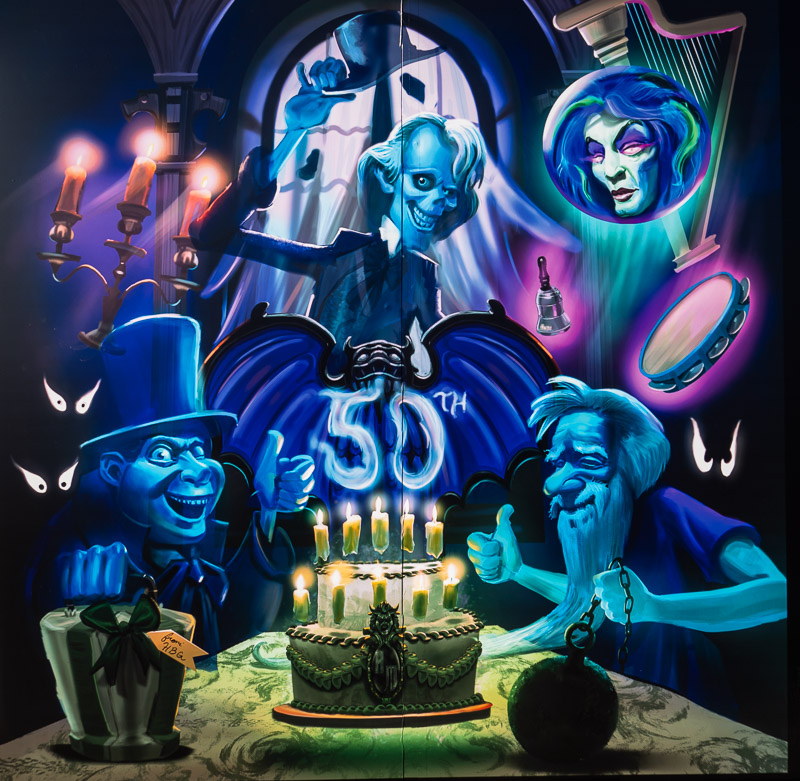 It’s clear that Imagineers are more involved with the Epcot Festival of the Arts just by virtue of the galleries and displays, many of which are credited to specific Imagineers.

Beyond that, the core creative legacy of the company and the nature of this event could easily explain why it receives more attention than other Epcot offerings. 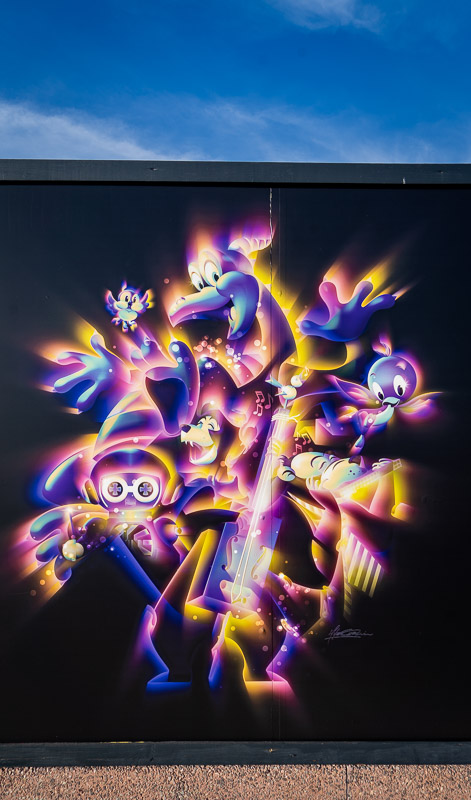 Festival of the Arts is also the one time of year when Epcot’s sea of construction walls become an asset instead of liability, as they’re lined with awesome art, and interactive elements. We’ll even go ahead and call them “Progress Walls” or whatever that nonsense name Imagineers used for them.

Above is one of my favorite pieces. Figment, Country Bears, and Orange Bird all with an 1980s aesthetic?! It’s like a window into my mind, but much cooler. I’d even buy this in t-shirt form, despite my standing rule against black clothing (the cat and his fur love black clothes a bit too much). 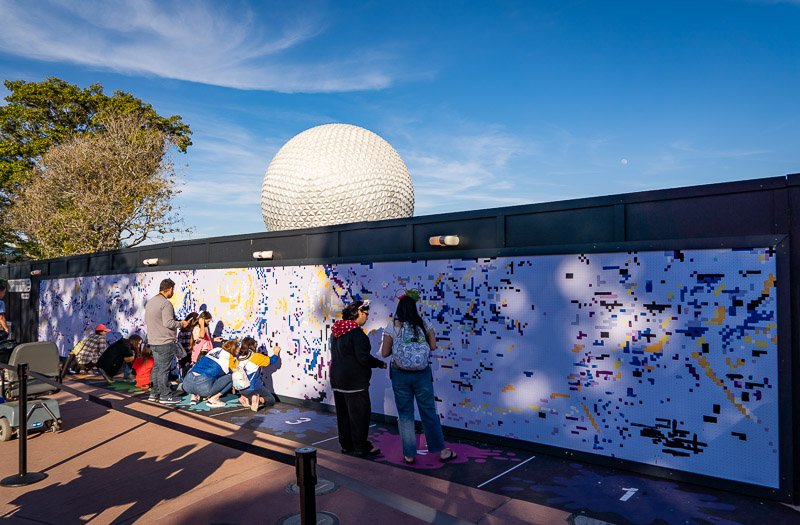 Over by the Living Seas, on the backside of the Moana Journey of Water construction, you’ll find the paint by numbers mural.

It may not look like much here, but this mural will become a Van Gogh-inspired nighttime skyline of Epcot featuring Spaceship Earth. Give it a couple days. 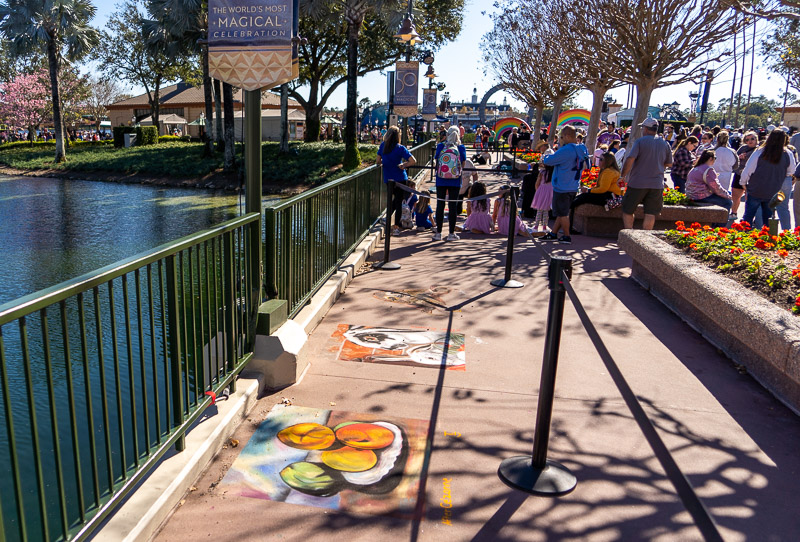 Between World Showcase and Future World, there are chalk art galleries that are actively being worked on during daytime hours. 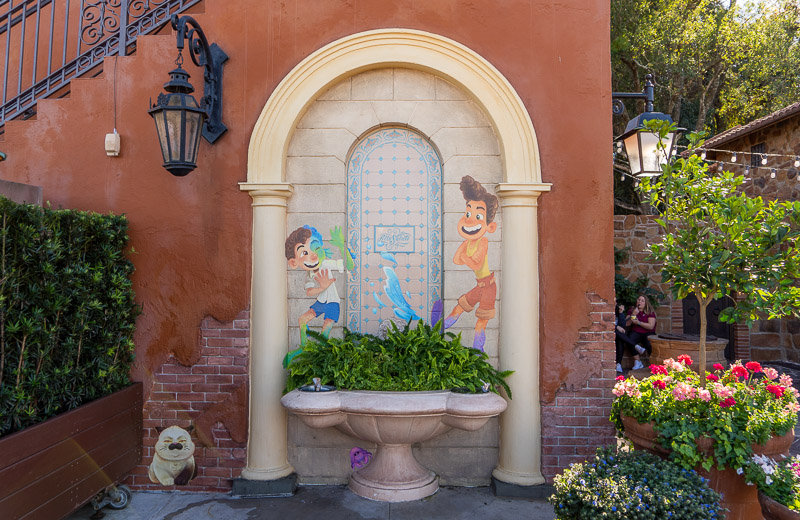 Also love seeing all the little art and characters added around World Showcase.

I wouldn’t want these additions to be permanent, but as temporary ‘scavenger hunt’ additions, they’re a fun way of injecting Disney characters and engaging kids (and us, I guess) while wandering World Showcase. 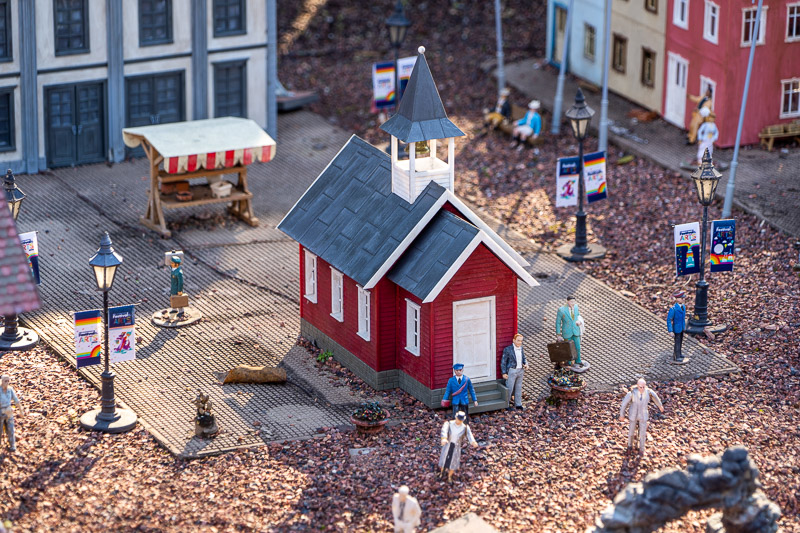 Another detail I love–which happens for every Epcot festival–is changes to Germany’s train diorama.

The little banners are a fun touch. 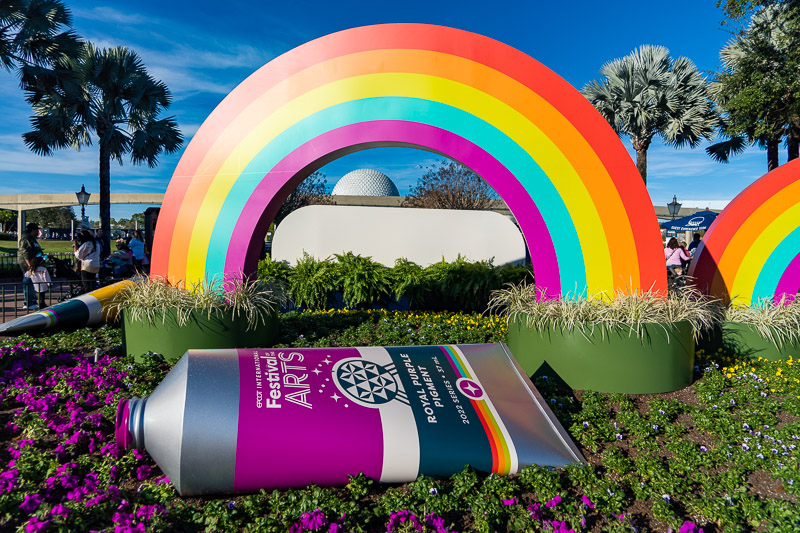 Same goes for the planters in World Showcase Plaza.

Not only have a ton of fresh flowers been planted throughout this area, but there are tubes of paint with nods to Figment on their labels. 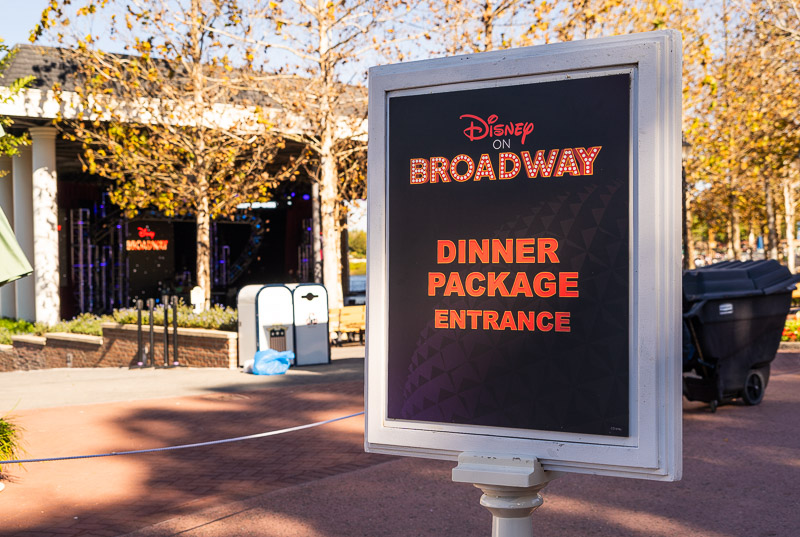 We did the Disney on Broadway concert series on opening night, arriving just as the show started and still scoring seats via standby. Naturally, my camera died right as the show started; someone took a few too many food and Beacons of Magic photos earlier in the day.

We saw the brother and sister who performed in Aladdin at the same time–but in different locations, which makes more sense. They were fantastic and had a great rapport. We’ve never seen a “bad” Disney on Broadway concert–my only complaint is that they’re too short! 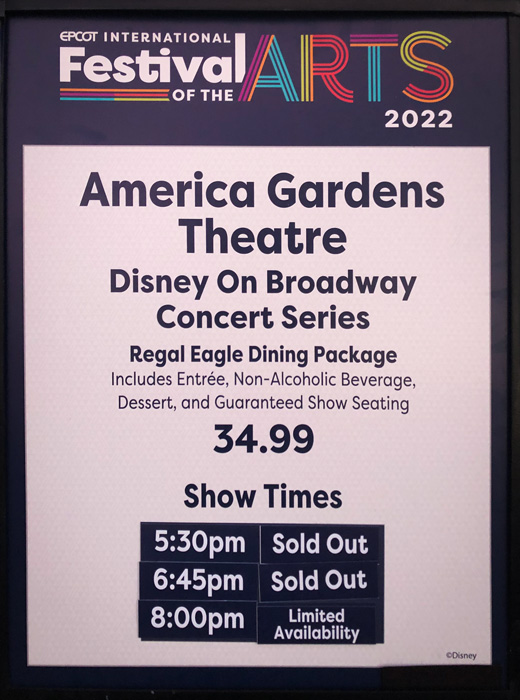 For what it’s worth, there are same day dining packages available at Regal Eagle if you want guaranteed seats. These actually sold out for the 8 pm performance we attended–I’m not sure if that’s been happening with regularity on weekdays.

Previously, we’ve advised against buying the dining package. Based on what we’ve seen so far, I think that’s probably a safe approach, except perhaps on weekends or holidays. We have noticed that the seating area is filling up more than in years past, but it’s still not on par with Candlelight Processional. 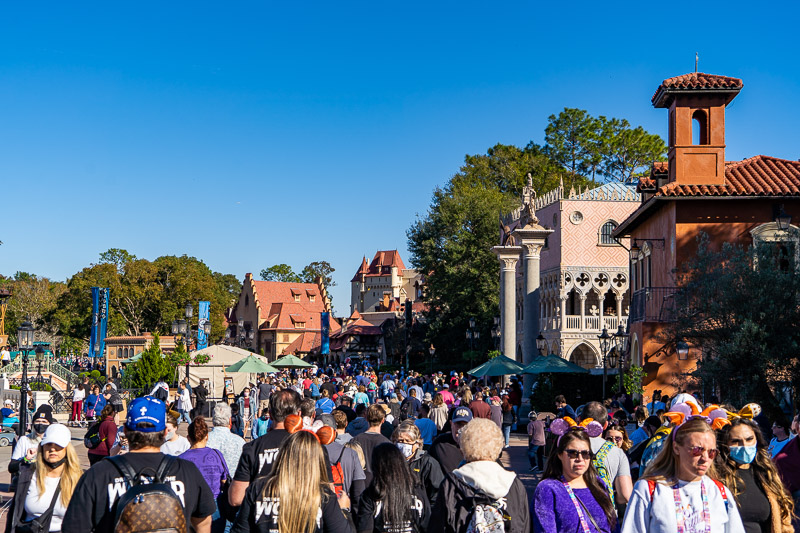 Speaking of crowds, they’ve been on the heavier side. As covered in our Massive Crowds for MLK Weekend 2022 at Walt Disney World, there is a huge difference between wait times and “feels like” crowds/congestion at Epcot during the event.

Both did drop off this week, which is unsurprising given the weekday v. weekend difference at Epcot (see our Best & Worst Days to Visit Every Park at Walt Disney World in 2022). As we’ve said before, attendance fluctuates dramatically at Epcot, and is driven disproportionately by locals, who are much more likely to go on weekends. In general, this winter is going to be nothing like the sleepy off-season experienced last year at the same time. 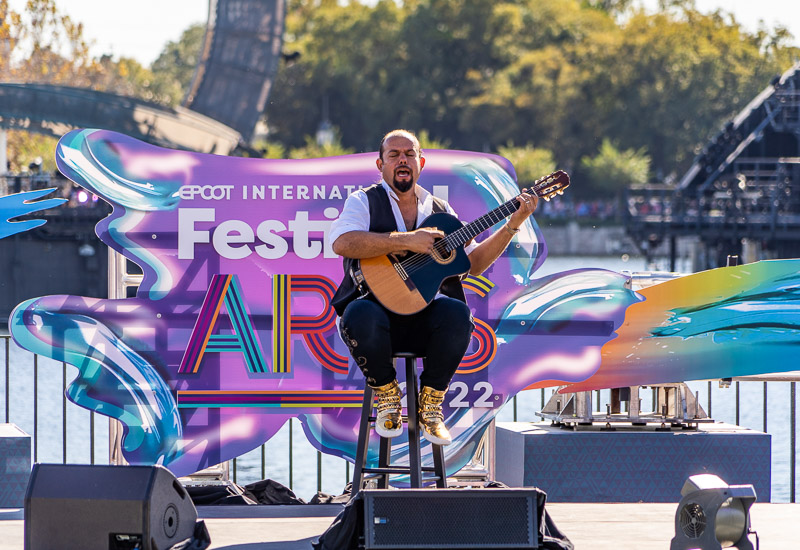 Ultimately, we could go on and on gushing about the 2022 Epcot International Festival of the Arts. Isn’t it nice to have some good Walt Disney World news after the last year-plus?! It shouldn’t be, but Festival of the Arts is refreshing given all of the cutbacks of the last year. Not only that, but it’s a celebration of creativity, which is the heart and soul of the Walt Disney Company.

That’s one of the big reasons why we love the Epcot International Festival of the Arts so much–that it’s not simply Food & Wine Festival: Winter Edition. Ironically, the culinary component of this (and all of the other festivals) is stronger than Epcot’s flagship foodie event, but it’s still the least compelling aspect of Festival of the Arts. 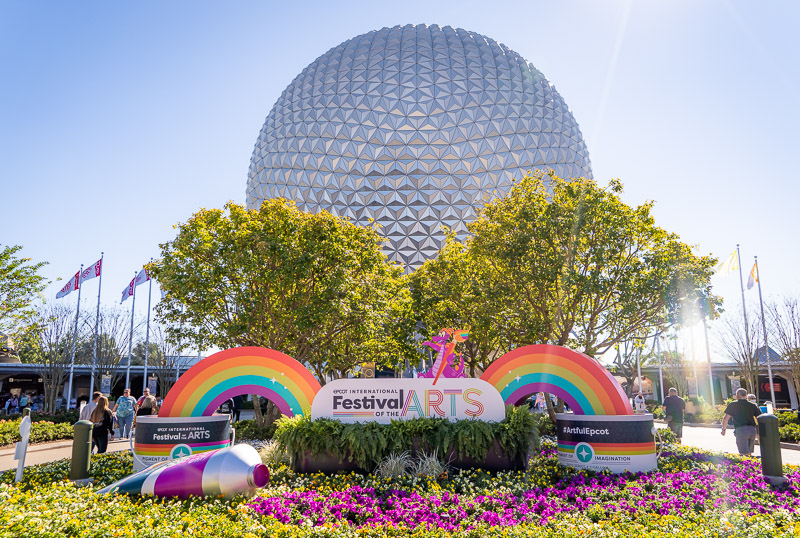 Thankfully, that’s still the case. By and large, the 2022 Epcot International Festival of the Arts is as strong as ever, once again making this the most “EPCOT Center” the modern park ever feels and Epcot’s best event of the year.

It’s actually a shame that the Figment popcorn bucket fiasco has overshadowed everything else about the event, as the 2022 Epcot Festival of the Arts is otherwise awesome. In fact, for the sixth straight year, the Epcot International Festival of the Arts is the biggest selling point for planning a winter trip to Walt Disney World.

Have you visited the 2022 Epcot International Festival of the Arts? Planning on attending the event in the next month or so? Happy to see so many artists and exhibits on display? Disappointed by anything missing? What do you think of the lineup of Food Studios? Do you agree or disagree with us that this is Epcot’s best event of the year? Any questions we can help you answer? Hearing your feedback–even when you disagree with us–is both interesting to us and helpful to other readers, so please share your thoughts below in the comments!

8 Responses to “2022 Epcot Festival of the Arts Review”