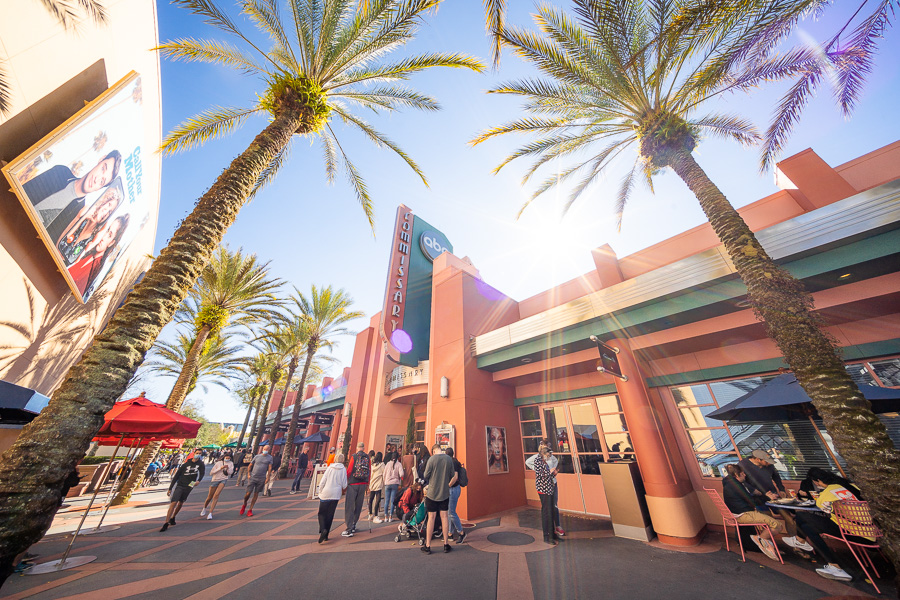 Menu changes are a fact of life at Walt Disney World. You should never get too attached to an entree, dessert, or snack, as they could be gone by your next trip. Save for some iconic OG items, this is especially true at Disney’s Hollywood Studios, where menus change with the wind.

No restaurant at Walt Disney World exemplifies this more than ABC Commissary. This blog has now been around for a decade, and prior to this, we had reviewed ABC Commissary only once, early on in that run. In the years since, we haven’t ignored ABC Commissary because it’s boring. To the contrary, we’ve done many meals here despite it being boring. In various updates and unrelated posts, we’ve teased of reviews to come once we did another meal there to “sample more of the new menu.”

Those words seem to be the kiss of death for ABC Commissary’s menus, all but ensuring another change in the very near future. Most recently, this happened when we shared preliminary thoughts on the “shockingly delicious” new breakfast at ABC Commissary. A week later, Walt Disney World closed. Coincidence? We sure hope so, otherwise this review is really tempting fate…

Joking aside, ABC Commissary has had an absurd number of menu changes in the last several years. This is not altogether uncommon at Disney’s Hollywood Studios, as the park tweaked a lot of its food and beverage offerings during its multi-year overhaul and debut months of Star Wars: Galaxy’s Edge. During that time, ABC Commissary was a test kitchen of sorts.

Even by DHS standards, ABC Commissary has switched things up a lot. It wasn’t just entrees, but concepts, that were tested. For a while, ABC Commissary offered a fast-casual, quasi-table service dinner that required Advance Dining Reservations–similar to Be Our Guest Restaurant’s previous lunch service. During that window, ABC Commissary was briefly one of the best uses of Disney Dining Plan credits at Walt Disney World. 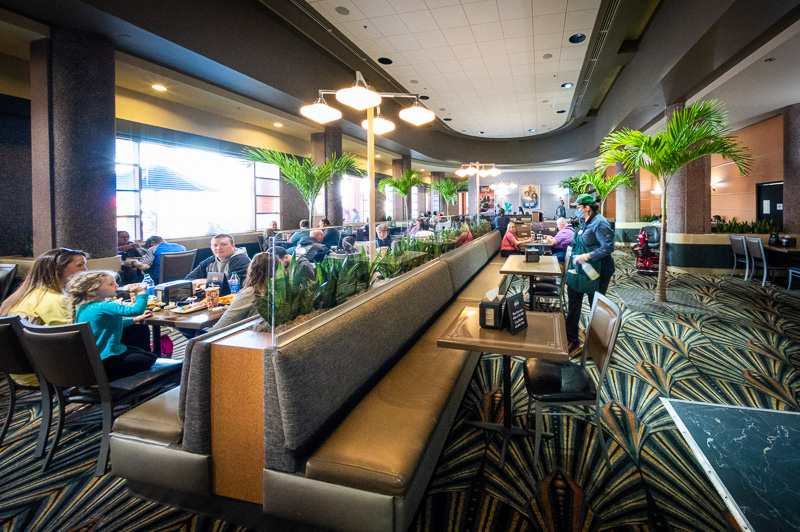 In addition to menu and concept changes, ABC Commissary also received an aesthetic refresh. This entailed a fresh coat of paint outside, new carpeting, updated tables and upholstery, and a self-service drink station.

None of these are brand new development. However, since ABC Commissary is largely ignored by Walt Disney World fans and blogs like this one, we figured it’s worth a quick recap to bring you up to speed. 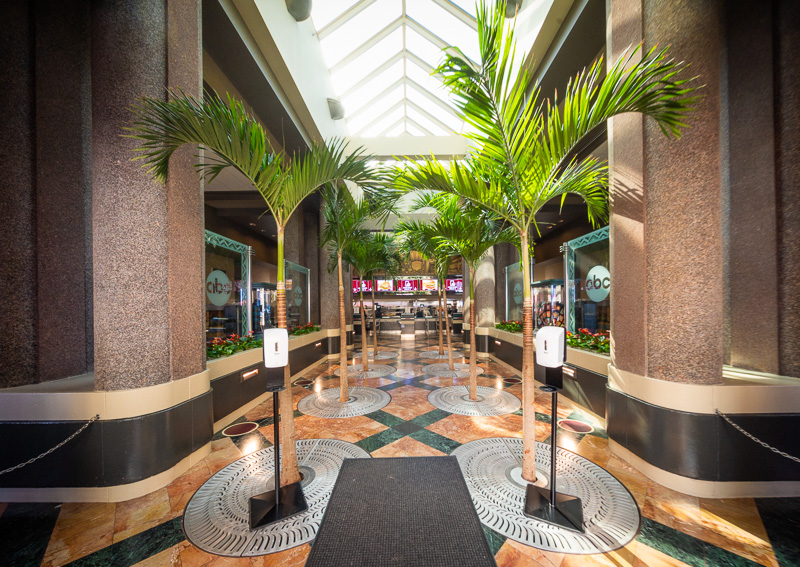 ABC Commissary features an Art Deco-inspired interior, film posters, and ABC television show props on display. I’m guessing these are still regularly-updated because we didn’t recognize any of the TV shows, which makes sense given that we haven’t watched an ABC sitcom since Modern Family.

ABC Commissary would be a thematically weak restaurant anywhere in Walt Disney World. In DHS, a park where restaurants burst with personality, creativity, and stellar ambiance, it’s downright dull. Every park has its utilitarian eatery, and ABC Commissary serves that role at Disney’s Hollywood Studios. 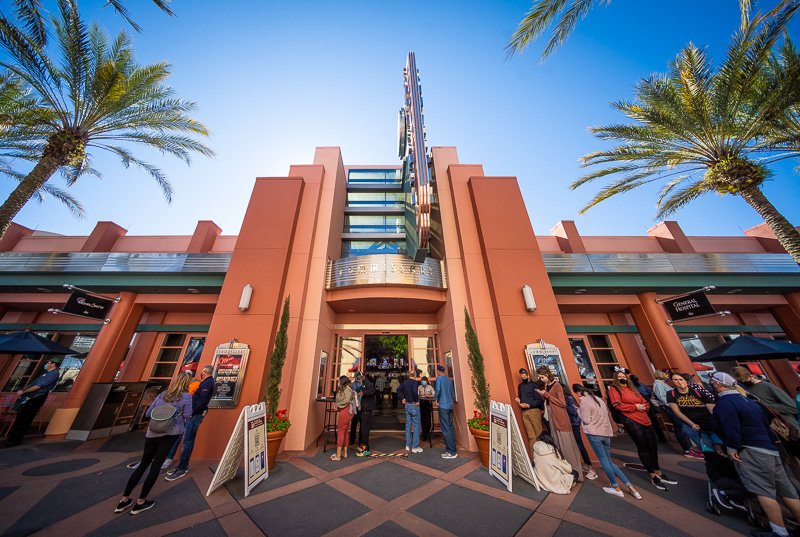 At lunch, it’s not uncommon to see guests loitering around in the narrow walkway out front of ABC Commissary, waiting for their Mobile Order pick-up time. Our advice would be to grab an outdoor table on the far side near Mickey & Minnie’s Runaway Railway. Despite lots of very visible seating over here, most guests miss this since it’s around the corner from ABC Commissary.

Now let’s move along to the cuisine at ABC Commissary… 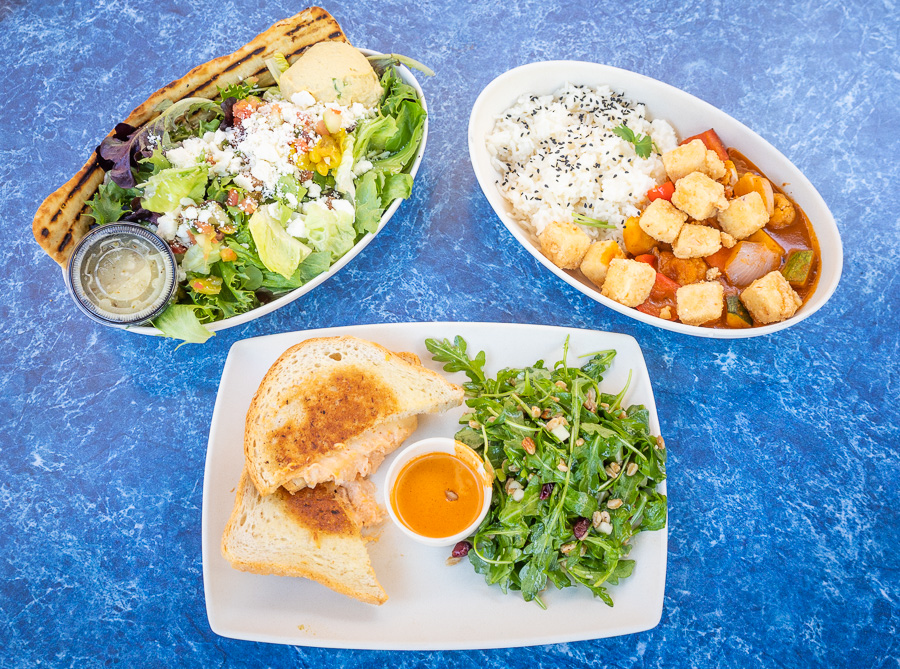 In the past few years, some of the perpetually-changing menu items at ABC Commissary have been complete abominations. I’ve purged specific horrors from mind, “eternal sunshine” style, but vaguely recollect some scary seafood dishes.

However, far more could be described as surprisingly good. In fact, I’d call ABC Commissary an underrated gem of Walt Disney World dining; even amongst the roller coaster menu changes, so long as you chose wisely and avoided pitfalls, ABC Commissary generally delivered a good meal. That’s precisely what we did–we also ordered 3 entrees and are publishing this on the same night as our lunch here, ensuring a menu change cannot render this obsolete before our review…and all but guaranteeing another new menu will be announced tomorrow morning! 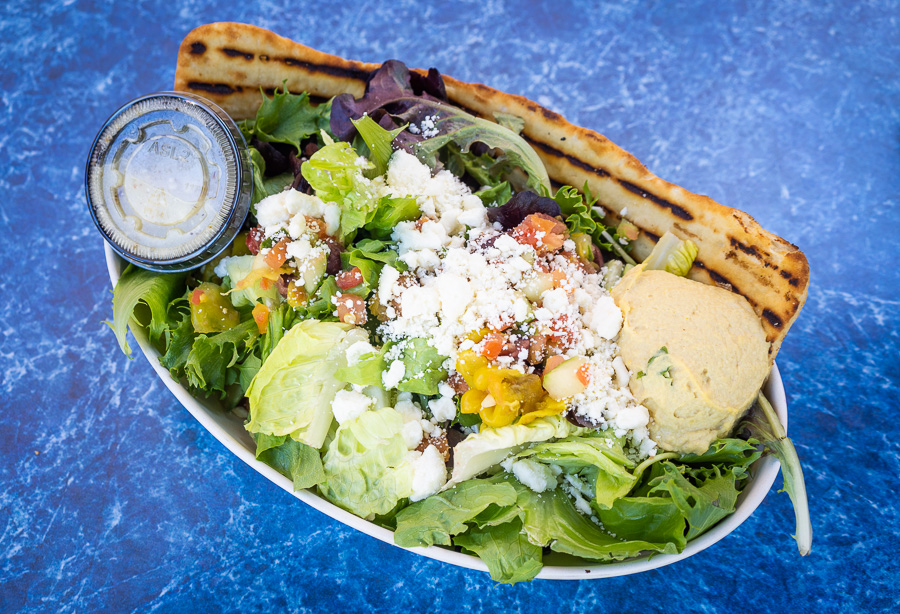 Let’s start with the least interesting item we ordered: the Mediterranean Salad with Mixed Greens with Tomatoes, Cucumber, Pepperoncini, Kalamata Olives, and Feta tossed in a Mediterranean Vinaigrette served with Hummus and Grilled Flatbread.

This was our hedge, as we’ve had a very similar salad at ABC Commissary in the past that was a standout. While unexciting, it’s a solid and inexpensive choice that offers a sizable portion with fresh, quality ingredients and is very good by counter service salad standards. Both the hummus and grilled flatbread are just fine, but should be considered bonuses. This is also available with chicken, which is always a gamble. (If I were gambling and not wanting one of the next two options, I’d give the Pork Carnitas Tacos a try over the Mediterranean Salad with Chicken.) 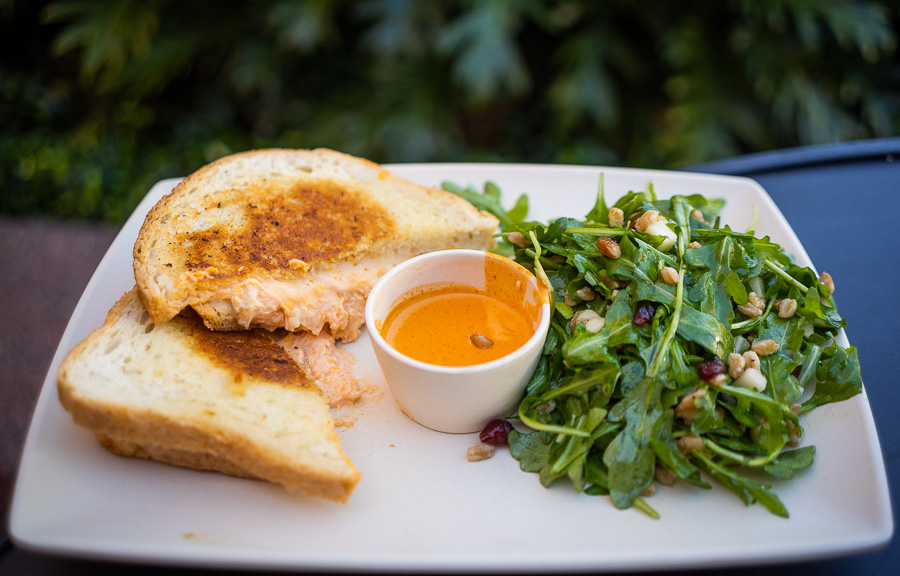 Next, we have the Buffalo Chicken Grilled Cheese Sandwich with Sourdough Bread toasted with Buffalo Chicken, Monterey, Provolone, Cheddar, and Cream Cheese served with a side of Buffalo Sauce and choice of side.

Eating this grilled cheese was the whole reason I wanted to do ABC Commissary; the pretext for this review. 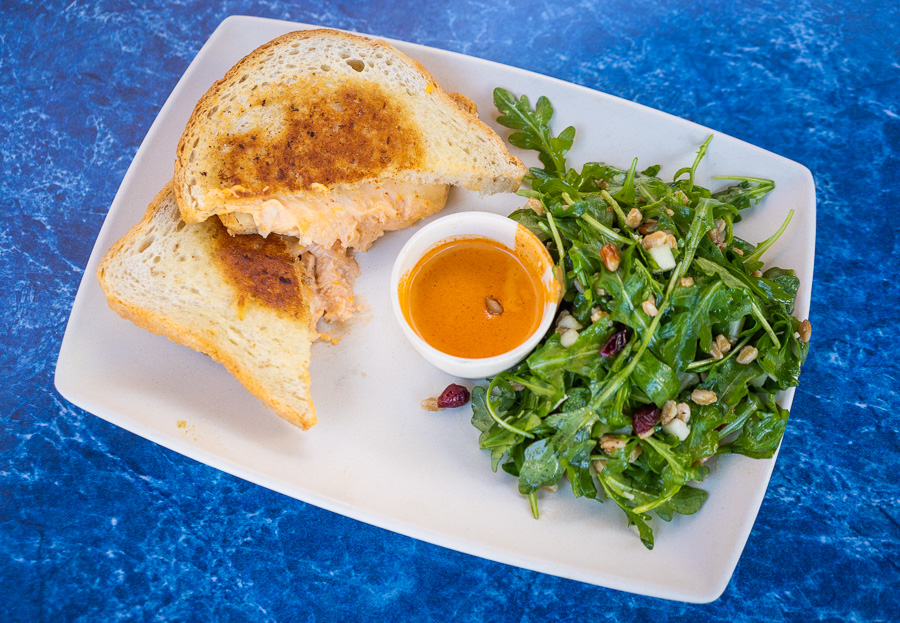 The Buffalo Chicken Grilled Cheese Sandwich did not disappoint.

It’s a gloriously gooey creation, with the four flavors of cheese balancing nicely with and “taming” the buffalo chicken. The toasted bread provides nice texture, and the dipping sauce can add a bit of kick–but it’s still pretty mild overall. It’s not spicy in any way whatsoever. We both absolutely loved this, and would highly recommend it. One of my favorite counter service comfort foods at Disney’s Hollywood Studios. 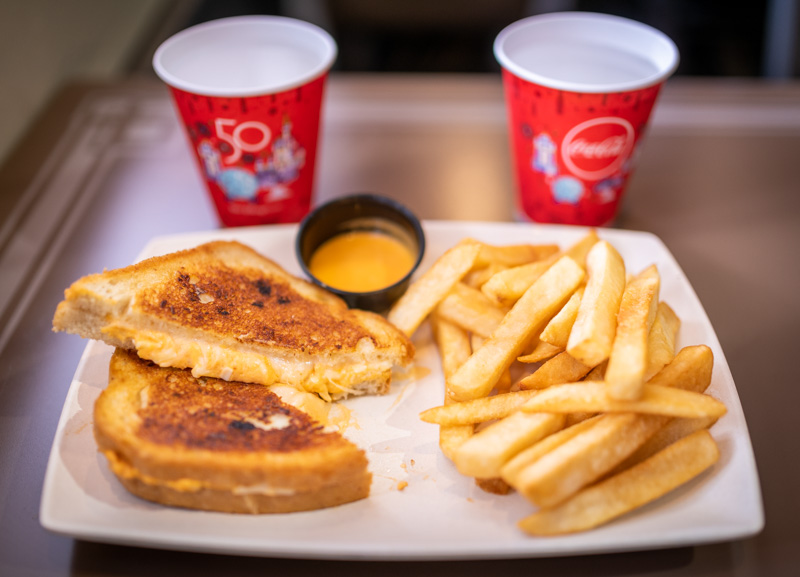 In fact, the Buffalo Chicken Grilled Cheese Sandwich has become my go-to lunch at Disney’s Hollywood Studios while testing out Genie+ and Lightning Lane strategy.

It’s filling, reasonably priced, and delicious. I like to order it and grab a seat in the corner to cool down in the air-conditioning for a bit. 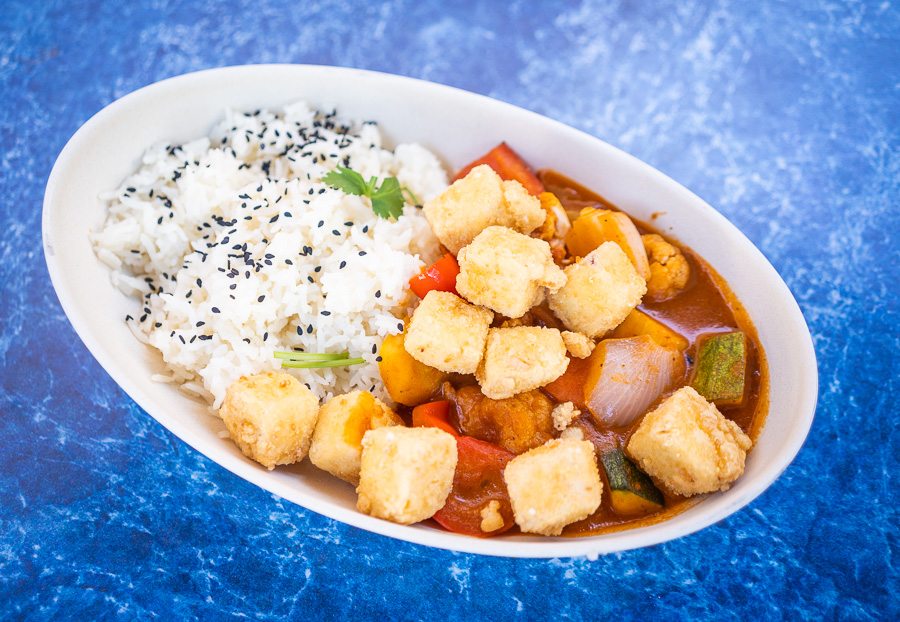 This plant-based option was the sleeper hit of our meal at ABC Commissary. The curry has a robust and complex flavor; like the buffalo chicken it has a very mild kick but nothing that makes it unapproachable. The vegetables and rice further rounded things out nicely. Neither of us have a particularly strong opinion on tofu, but we both agreed it was a standout here; the hint of pineapple and exterior crispness elevated it. We’d go as far as recommending this over the Buffalo Chicken Grilled Cheese Sandwich (yes, really!). It was that good. This Curry Rice Bowl is also available with shrimp, but that’s playing with fire. 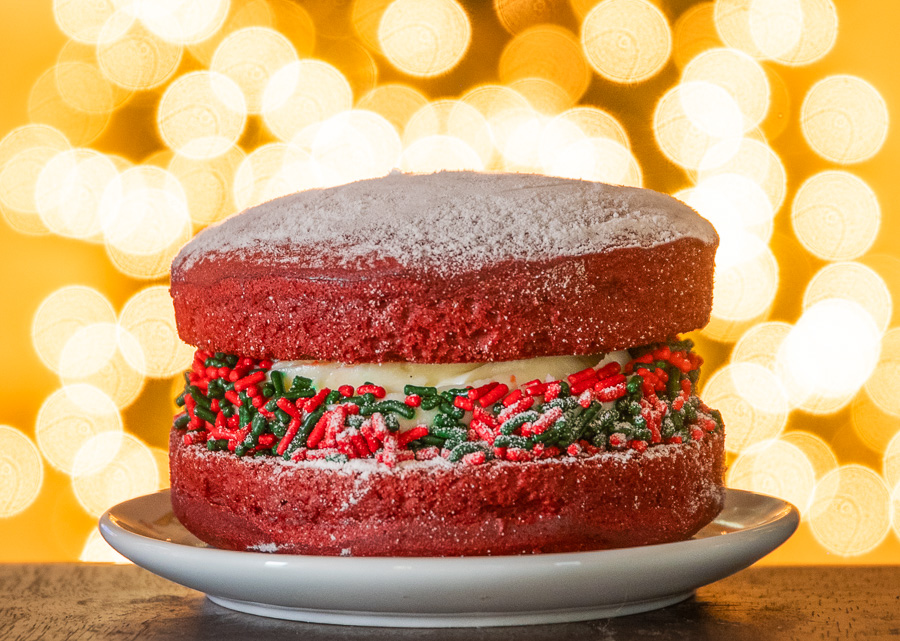 Finally, the dessert currently available is the Red Velvet Whoopie Pie. We didn’t have this today, but are fans of this dessert. It’ll probably disappear in the near future, but if not, consider adding this. It’s a shareable portion and pretty tasty. Not as good as the iconic Carrot Cake Cookie at Trolley Car Cafe, but still worth trying.

Overall, ABC Commissary’s new menu reaffirms its position as an underrated counter service restaurant at Walt Disney World. In large part, that’s understandable because few menu items stick around long enough to garner any kind of fan-following. The decor and theme are also boring as can be, which is a stark contrast to the many strongly-themed restaurants at Disney’s Hollywood Studios. 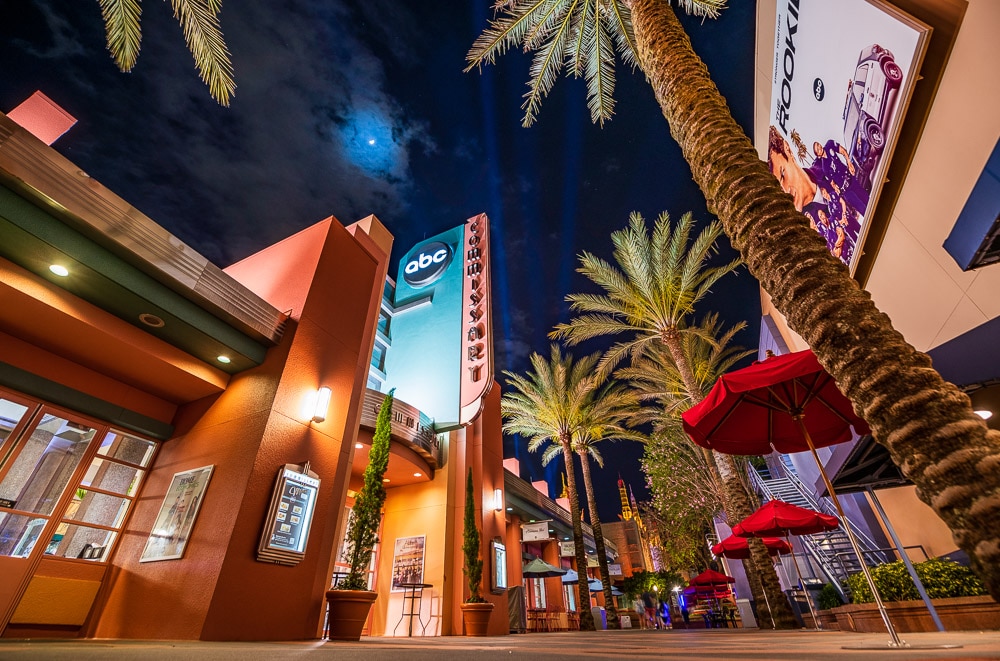 However, the menu is constantly reinvented in interesting and ambitious ways, many of which end up being quite good. On top of that, ABC Commissary is a good value right now. Compared to our go-to orders at Docking Bay 7 in Star Wars: Galaxy’s Edge (our favorite counter service not just in DHS, but all of Walt Disney World), the entrees we ordered here were significantly cheaper.

In fact, our three entrees at ABC Commissary cost roughly the same amount as the two we normally order from Docking Bay 7. That makes ABC Commissary a great option for guests on a budget or repeat visitors wanting to try something different. For first-timers willing to splurge a bit, there are numerous superior options around Disney’s Hollywood Studios.

Have you dined at ABC Commissary since the latest new menu debuted? Have you tried any of the other recent menus? What was your experience like? Do you think that ABC Commissary is underrated, or think it’s justifiably ignored due to its boring theme and/or menu? Do you agree or disagree with our assessment? Any questions we can help you answer? Hearing your feedback–even when you disagree with us–is both interesting to us and helpful to other readers, so please share your thoughts below in the comments!