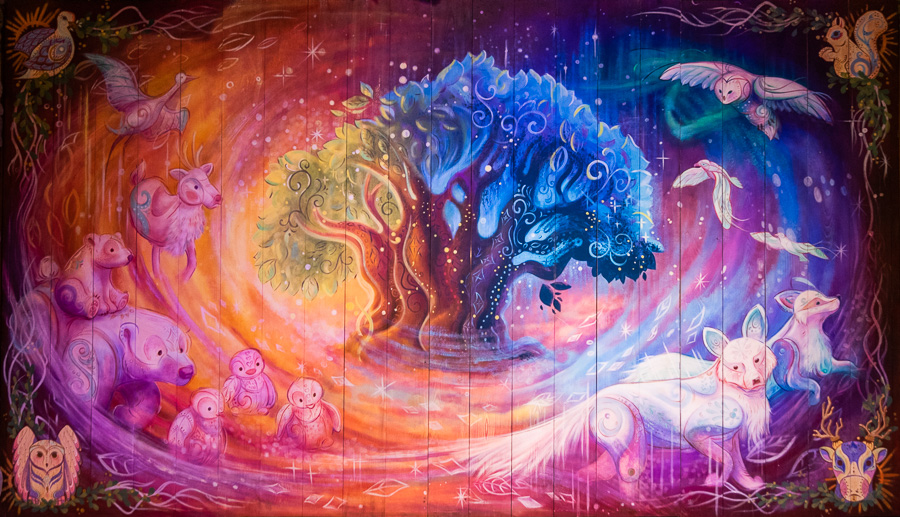 It’s time for another Animal Kingdom report. For this visit, we head to the park on a crowded and sold out weekend during the holiday season to check out crowds and Christmas offerings. This Walt Disney World update features photos, tips & info, our experience with crowds, nighttime in Pandora, and more!

In case you missed our Animal Kingdom “Holiday Hidden Gem” Report from last month, we updated our day of the week recommendation for Animal Kingdom to Friday or Sunday, with Disney’s Hollywood Studios on Saturday and Magic Kingdom on the other weekend day.

That was based on a few factors, all stemming from the longer operating hours at Animal Kingdom, which closes at 5 pm most weekdays but 8 pm on weekends. That’s the biggest weekday v. weekend difference of any park at Walt Disney World, making Animal Kingdom the obvious candidate for visiting on Friday through Sunday…

More importantly, we noted that Animal Kingdom closes before sunset on weekdays, which makes it difficult to see the Tree of Life Holiday Awakenings and enjoy the luminaries on Discovery Island and the other decorations throughout the park. This is huge, especially as we consider Animal Kingdom the “sleeper park” of Walt Disney World at Christmas.

Then there are the crowds, which were dropping off after 2 pm, making it easier to tour Animal Kingdom in the afternoon and evening than morning and midday. However, note the past tense on that… 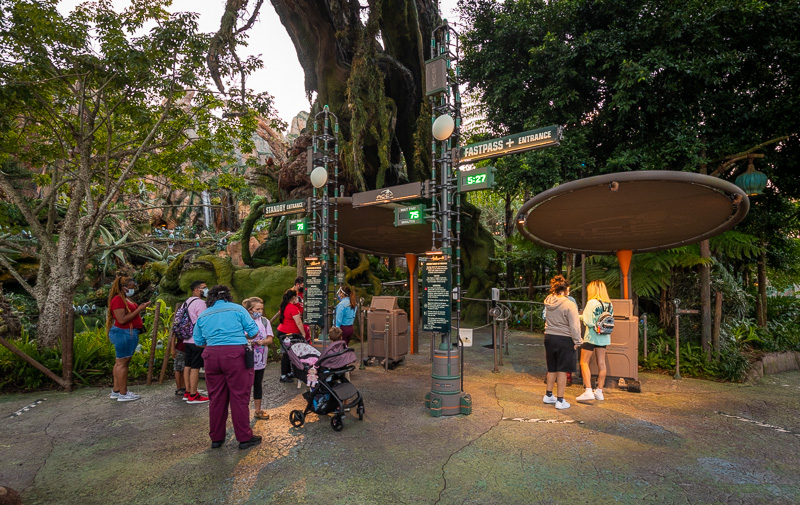 Honestly, I’m not sure how much to focus on Animal Kingdom’s crowd trends as what we experienced might now be moot. For one thing, weekday wait times are not nearly as bad.

For another thing, this was the last weekend of the year for most Annual Passholders to visit Walt Disney World, meaning that many locals had booked Disney Park Pass reservations for one last hurrah before 2021. 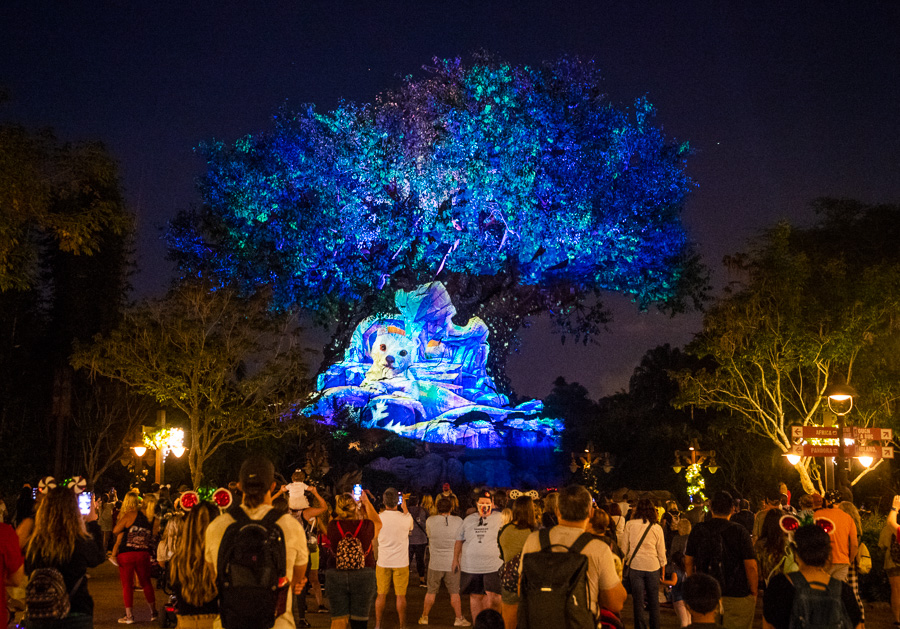 As of this Friday, every Annual Passholder at the Gold tier or below is blocked out for the remainder of the year. This is the vast majority of Walt Disney World APs. Given pricing and DVC discounts, plus what we’ve surmised anecdotally that’s probably 90% or more Annual Passholders.

This is something on which we almost never focus when it comes to Walt Disney World crowd analysis. That’s because, historically, it has almost never made a difference. Tourists typically drive crowd patterns, and those few weeks per year that APs are blocked out are bonkers because they’re peak vacation times. 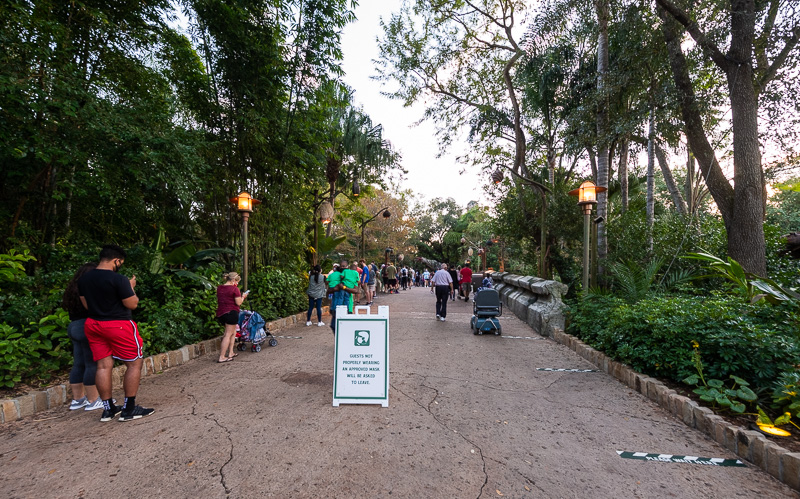 Obviously, this year is different. Demographics right now resemble normal times at Disneyland, rather than at Walt Disney World. In California, those crowds have been a different story the last several years. Since Annual Passholders make up a disproportionate number of all guests, they drive crowd patterns, and similar blockouts during “peak” season can result in lulls.

We’ll stop short of saying that’s exactly what we’re expecting the next couple of weeks at Walt Disney World since everything is so unpredictable…but we’re expecting something along those lines. 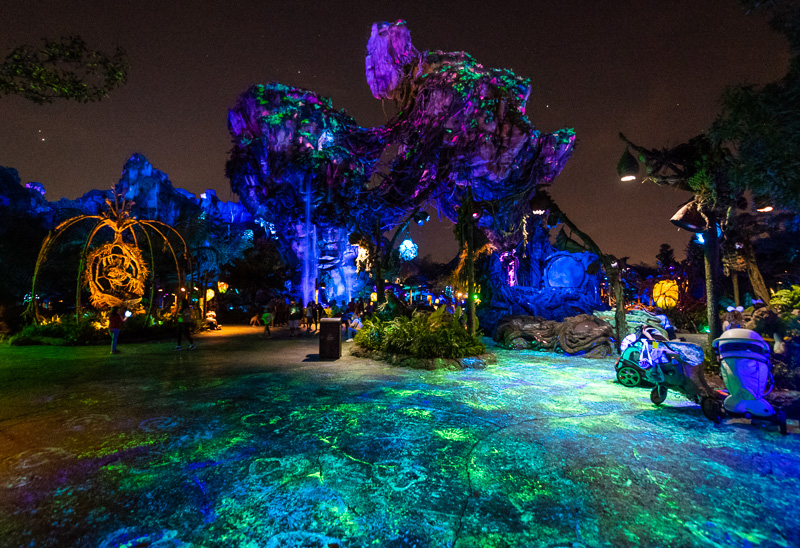 There are a disproportionate number of Floridians in the parks right now, with significantly fewer tourists. It stands to reason that this year’s Christmas crowd levels already peaked over this past weekend.

Or perhaps not. If there’s one thing we’ve learned this year, it’s to expect the unexpected. That, and post-reopening crowd levels trend only in one direction: up. So who knows, maybe this coming weekend will somehow be even busier. It’s not at all what we’re expecting, but we wouldn’t rule out the possibility. 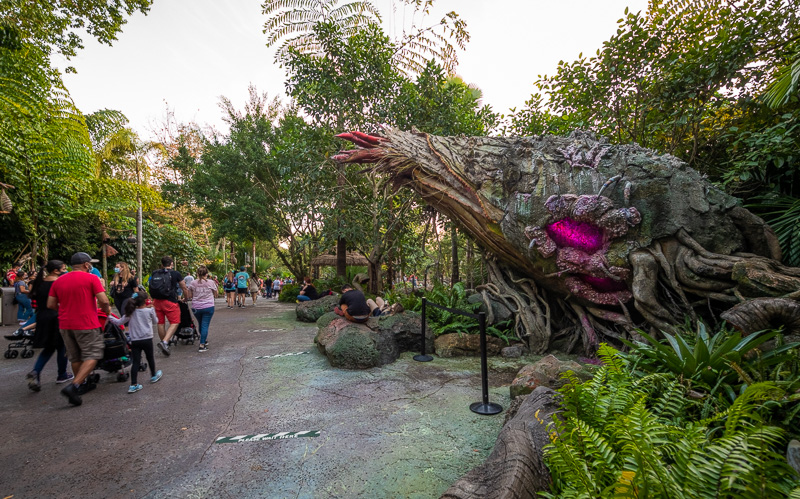 In any case, wait times were high and lines were so long that it’s unlikely there was much inflation happening.

Throughout the afternoon, the posted wait for Na’vi River Journey was 65-80 minutes. We saw it as far back as Pizzafari. 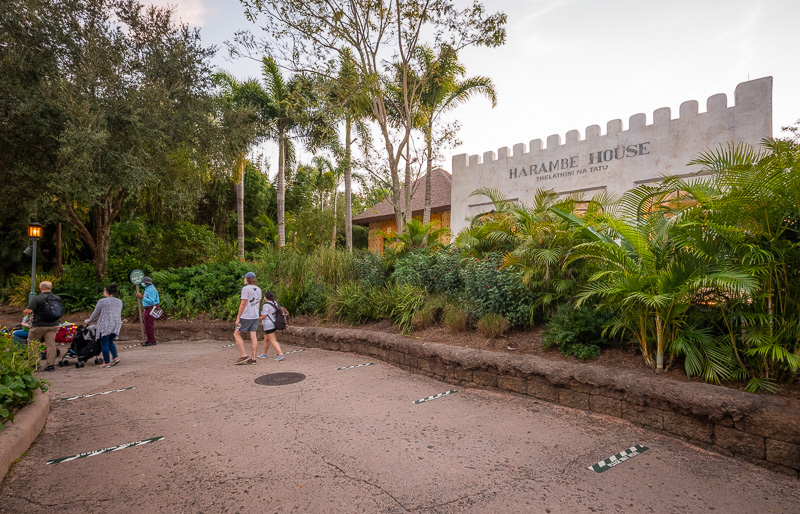 Meanwhile, the line for Avatar Flight of Passage went all the way into Africa, passing the Harambe House Club 33 lounge and ending at Festival of the Lion King.

We never saw the wait for Flight of Passage drop below an hour, even though the line did get shorter later in the evening. A far cry from back this fall when the posted wait would be 45 minutes but the queue didn’t begin until the lab and the actual wait was under 20 minutes. 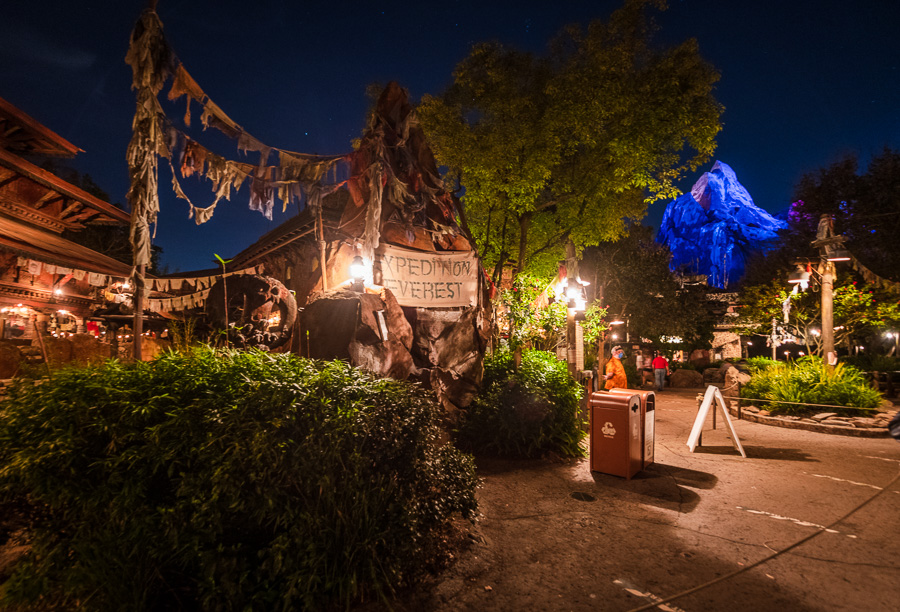 In the evening, DINOSAUR had a posted 45 minute wait time (while using extended outdoor queue along the side of the building I’m not sure I even realize existed) whereas Expedition Everest was a 10 minute wait with no queue outside its main entrance. Most non-Pandora attractions at that point were under 15 minutes. 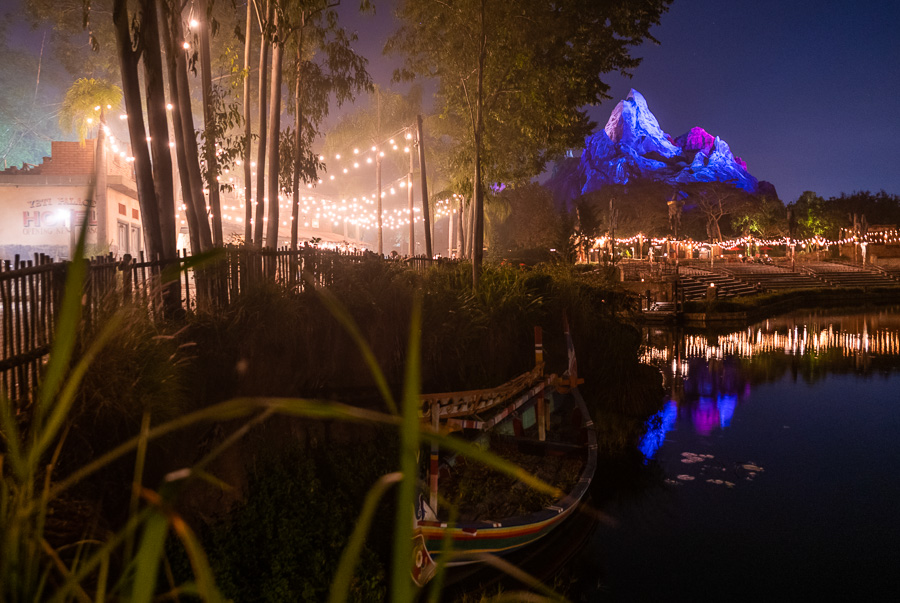 The explanation for lower wait times at Expedition Everest is that the attraction is now loading every row.

Potentially unpopular opinion, but I’m on board with this. The ride duration is short, guest orientation is correct, and air flow (ha) is exceptional. From a risk standpoint, you have far more to worry about dining indoors than doing an outdoor roller coaster that zips around at high speeds.

Personally, I wish Disney would loosen more policies (and tighten others) based on actual safety instead of the perception of safety. I’ll happily take wait times cut in half on some attractions if it means a de minimis increase in risk. 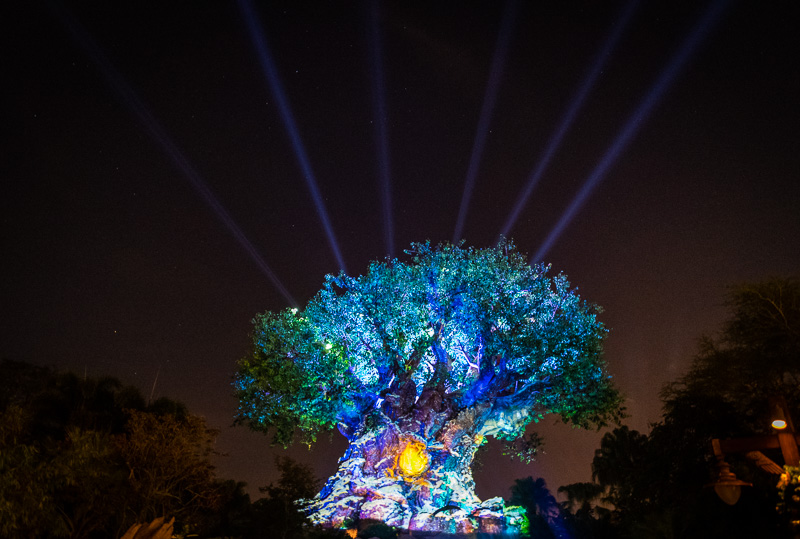 Our sole motivation for visiting Animal Kingdom was wandering around, experiencing the park in the evening, and enjoying the Christmas offerings.

Any attractions we could pick off with short wait times were simply icing on the cake. It would’ve been nice to do Flight of Passage, but we’ll try again on a weekday in January. 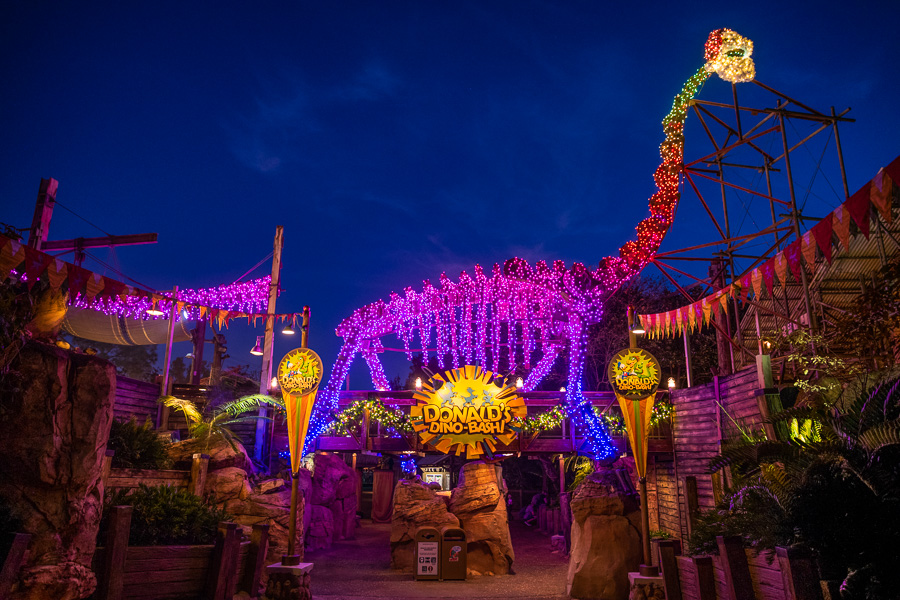 Last time, we made the oversight of not spending time in Dinorama in the evening.

Not really a huge mistake, as it comports with our standing policy of avoiding dumpster fires, but the area does have some charm at Christmas. 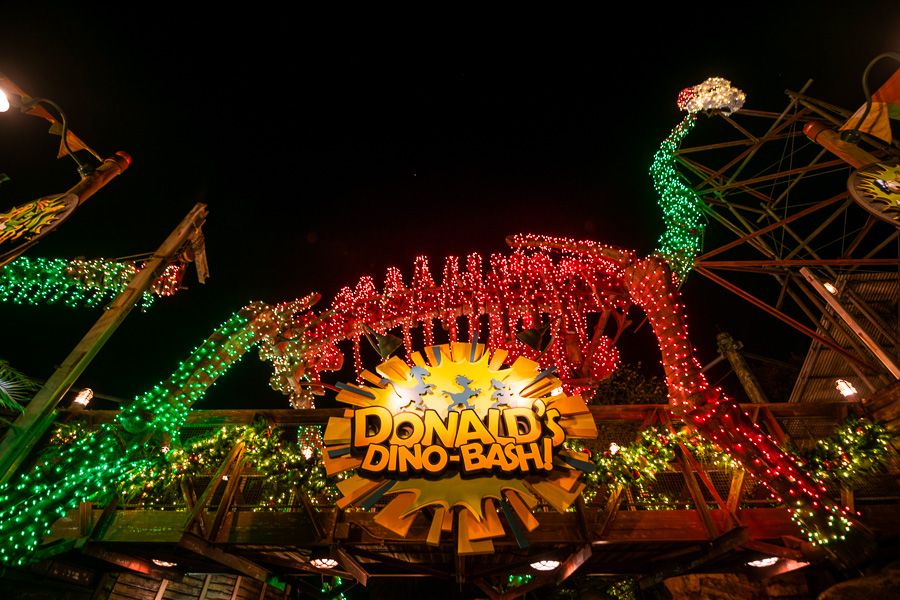 For instance, the brachiosaurus standing at the entryway is decked out with lights that dance to the area’s fun holiday background music.

This is literally better than Primeval Whirl. 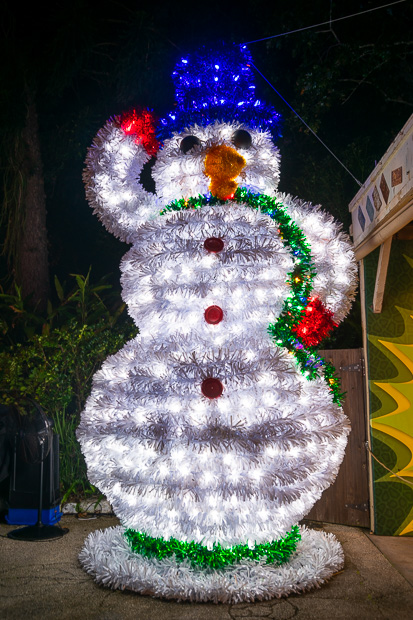 While there are plenty of nice touches throughout Dino-rama and Dinoland, a lot of the normal Christmas decorations that transform the area into something palatable are missing. Here’s hoping things return to normal next year, because the decorations really make a big difference.

We didn’t purchase it this visit, but just a PSA that the Double-Chocolate Peppermint Ice Cream Cookie Sandwich has returned to Dino-Bite Snacks.

This is one of my favorite treats this time of year in all of Walt Disney World. 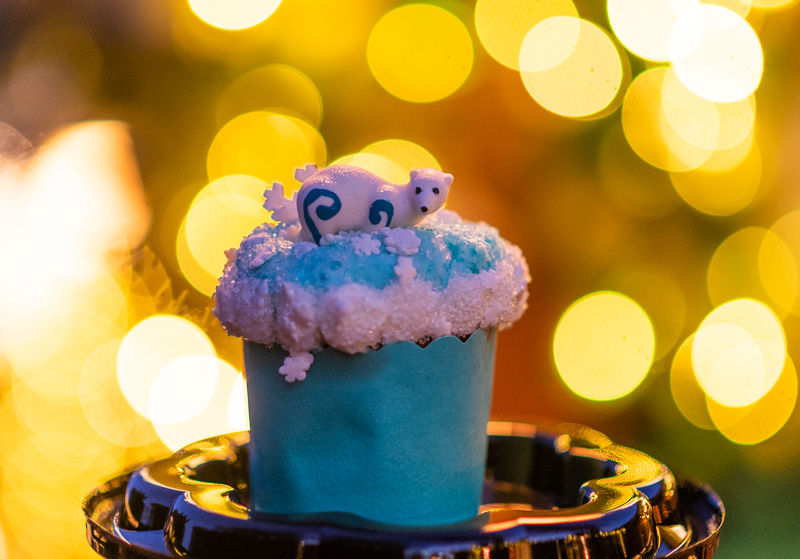 Instead, we tried the Menagerie Cupcake. This gingerbread cupcake with cream cheese frosting topped with a white chocolate bear is available at various locations: Creature Comforts, Flame Tree Barbecue, and Restaurantosaurus.

This is pretty much exactly what you’d expect. Good gingerbread flavor from the base, plus cream cheese frosting inside and on top of the cupcake. It didn’t taste overly artificial, which can be a problem with Walt Disney World cupcakes, but it also didn’t have any wow-factor. It’s a safe choice if you’re after a gingerbread cupcake, but not nearly as good as the aforementioned ice cream sandwich. 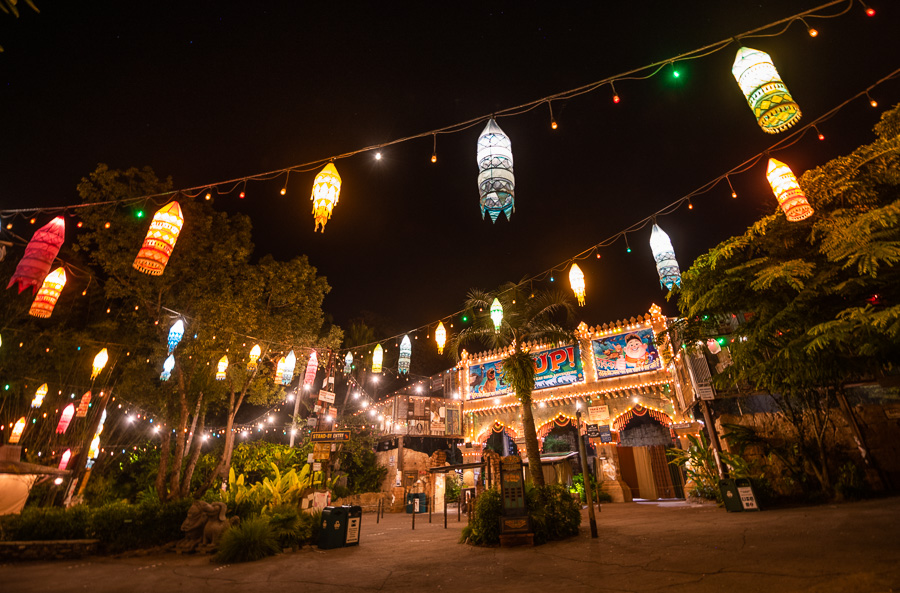 When things go back to normal, I’d love to see Animal Kingdom do more with the celebration of Diwali, the holiday festival of lights featuring lanterns that illuminate the square between Anandapur Theater and the waterfront stage.

This is an underrated gem that really gives life to Asia at night. It’s also a great spot for a family holiday photo–often devoid of people, and is one of the few spots in Animal Kingdom at night with bright and vibrant lighting. 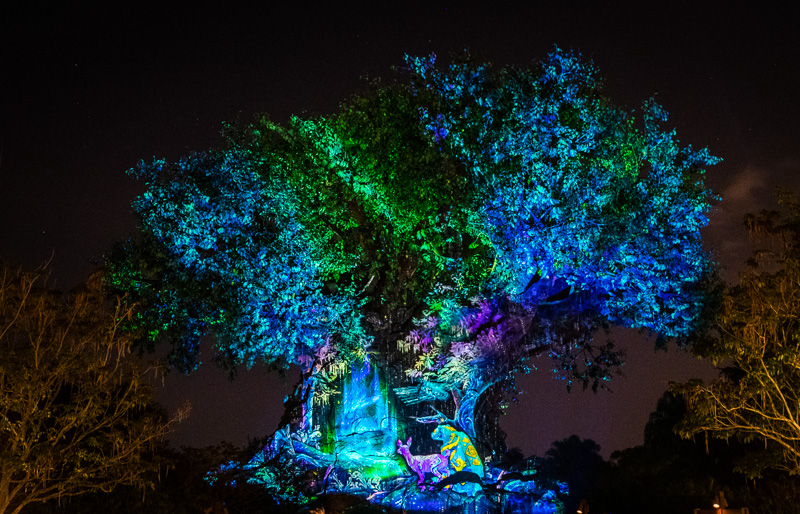 We said this in the last update, but we want to reiterate our endorsement of the Tree of Life Holiday Awakenings.

These begin shortly after sunset and continue until park close, telling a series of winter tales, complete with a familiar and heartwarming holiday-inspired musical score. 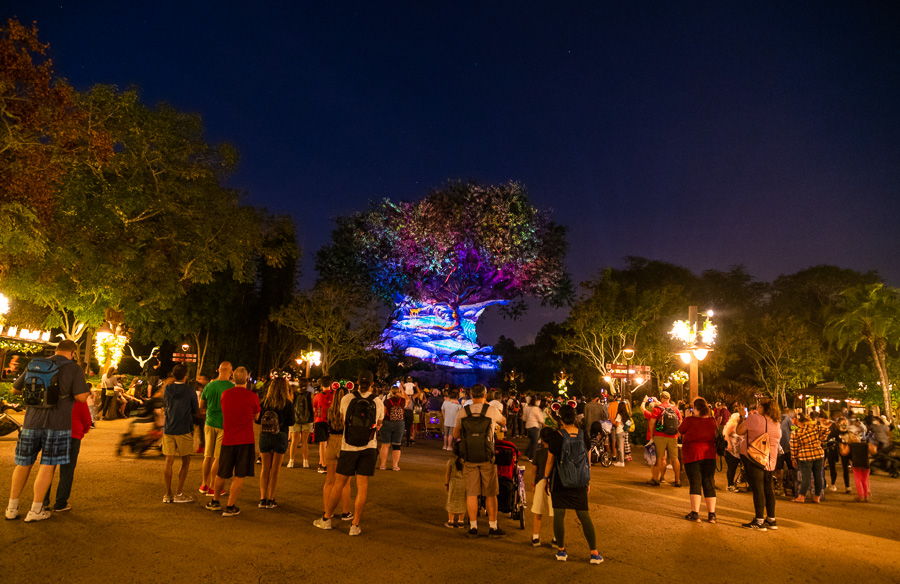 To our delight, the Tree of Life Holiday Awakenings are drawing more of a crowd than our last visit. It’s hard to tell from the photo, but physical distancing is pretty good up here.

Unlike in Magic Kingdom, few (if any) guests are camping out waiting for the Tree of Life Holiday Awakenings. That’s unfortunate, as these are exponentially better than the mostly-static “scenes” on Cinderella Castle. 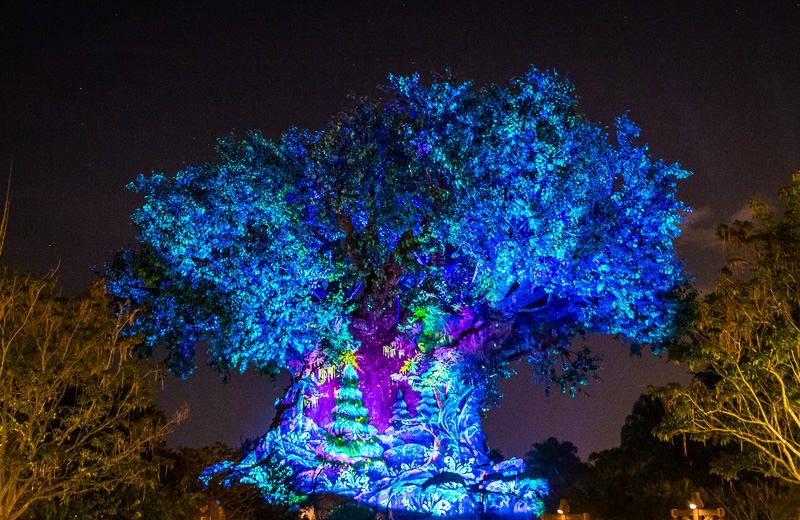 Nevertheless, the Tree of Life Holiday Awakenings are very taste-specific. They’re beautifully scored and styled, but they don’t feature any Disney intellectual property and are more understated in approach. Akin to a few minute projection-mapped version of Rivers of Life or IllumiNations (RIP homies).

In other words, if you have good taste, you’ll like these. My favorite is the Merry Menagerie/Nutcracker/Aurora Borealis one. It’s sublime.

That’s a wrap on this Christmas-time visit to Animal Kingdom. We still “need” to have the Double-Chocolate Peppermint Ice Cream Cookie Sandwich and I also really want to eat the White—Chocolate Peppermint Cream Cheese Mousse at Satu’li Canteen that isn’t available until this weekend for some reason, so we’ll probably be back sooner rather than later. Since most of you probably aren’t concerned with a dessert that’s around for ~10 days, we’ll also have an update on crowds and wait times to see if our theories prove correct!

What are your thoughts on Christmas crowds at Walt Disney World? Think they’ll drop once the AP blockout hits? What about Expedition Everest and other roller coasters loading every row? Are you a fan of Animal Kingdom’s Christmas decorations? Excited for all of the offerings on Discovery Island? Think it’s worth doing Animal Kingdom on a busier weekend day to enjoy the evening holiday entertainment and decorations? Any questions we can help you answer? Hearing your feedback is both interesting to us and helpful to other readers, so please share your thoughts below in the comments!