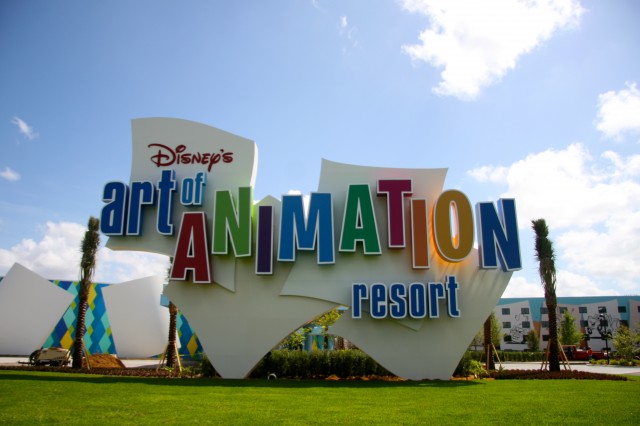 The Disney Parks Blog announced that Walt Disney World’s Art of Animation Resort is on track to open early with the entire resort opening by September 15, 2012! The 1,120 guest rooms in the Lion King, Cars and Finding Nemo buildings at Disney’s Art of Animation Resort will be family suites, with another 864 regular rooms in The Little Mermaid buildings. The new opening dates for the different sections of this new Value Resort are as follows:

The biggest news of all, possibly, is that reservations for Cars, Lion King, and Little Mermaid sections all will begin being accepted Friday, March 23, 2012. So get on the phone first thing tomorrow if you want to book at room in the Little Mermaid building for Epcot’s 30th anniversary or Food & Wine Festival!

Some other new details have come out of recent walk-throughs of the hotel. The room doors will use an RFID entry system (NextGen in action!); the check-in desk (or desks, rather) at Art of Animation will have multiple islands with two check-in stations each; the counter service restaurant, Landscape of Flavors, will have LCD screens offering made-to-order dishes; and the zero-entry Nemo-themed pool will be the largest pool on property and will not allow pool hopping. Numerous other recently revealed details suggest that Art of Animation will be the nicest Value Resort at Walt Disney World.

We know there isn’t a whole lot of love lost for the Value Resorts among a lot of Disney fans, but we generally love them. Sure, the architecture isn’t as sophisticated as the Contemporary or the Polynesian, but they are whimsical Disney fun, and really speak to our inner-child. From what we’ve heard and seen so far, Art of Animation ups the ante for what Value Resorts offer amenities-wise (no pool hopping at a Value–that right there says something!). We can’t wait to stay in The Little Mermaid wing, and as a photographer, I can’t wait to photograph the entire resort. It may not be for everyone, but it’s certainly for us!

master bedroom has its own dresser and TV. It also has a master bathroom with a tiled shower with glass doors. The living room has another built-in dresser and another TV. The kitchenette is in there, as well as a large sleeper sofa and two ottomans. The most amazing feature is the Kitchen Table Murphy Bed.