Plans for AVATAR Land have been posted online, and on October 12, 2013 at the Japan D23 Expo, Disney released concept art seeming to confirm these plans. While Disney didn’t explicitly say so, the concept art features a boat floating through a nighttime jungle of bioluminescent plants (think Living with the Land, except breathtaking “Imagineered” plants), a sim ride where you soar into the sky riding a Banshee (think Soarin’), and an incredible environment based on AVATAR, with mountains that appear to float, and other mythical environments. All of this roughly matches those plans that leaked back in 2012.

For some, the even bigger news is that the new plans call for nighttime entertainment on Discovery Island. Based on the description and concept art, this new show sounds like a combination of the Disney Dreams (at Disneyland Paris) tech and the type of pageantry from Tapestry of Nations, the parade that ran in Epcot’s World Showcase during the Millennium Celebration.

This all comes just a couple of months AVATAR Land was teased at the Anaheim D23 Expo, effectively putting to bed months of rumors that the project was on life support or dead. It sounds as if an agreement between James Cameron and Disney has been reached concerning the content of AVATAR Land, and the pace of the project is set to pick up. After the colossal success of the Disney California Adventure overhaul, let’s hope AVATAR Land is similarly well-done.

I’ve been watching this story closely since the beginning, and this article was originally posted in October 2011, updated in September 2012 with information about the status of the project, and again in October 2013 with more concert information and concept art released by Disney.

On October 14, 2013, the video below was released. I have to admit, this has me really excited for Avatar Land!

Prior to our 2012 update, I had been hearing for months that Avatar Land (or “The World of Avatar”) has been on life-support or was to be quietly canceled by Disney. These rumors seemed reliable, and there was intense speculation that the project was shelved along with Cameron’s 4th Avatar film. Even after that and up until the Anaheim D23 Expo, speculation was intense that the project was not going to happen, due to “creative differences.” Preserved for the sake of history (some of the speculation is almost humorous now) is our original 2011 post, including our reaction to it in 2011. I’ve added a few parentheticals in italics to the “Reaction” section to reflect our new thoughts since that time.

Today is one of those days where the Disney community received such monumental, discussion-provoking, and exciting news that I felt behooved to share it with the 3 or so of you who haven’t yet heard about it: I’m talking about James Cameron’s Avatar coming to Disney’s Animal Kingdom.

In other news, James Cameron and Disney announced today that Disney will be building attractions based on the film (soon to be films as two sequels are released) Avatar under a long-term, exclusive agreement with the parties involved in creating the films. The attractions are going to be built in an all-new Animal Kingdom “land” and is set to begin in early 2013. The Wall Street Journal estimates that the initial phase of the project is likely to cost $400 million.

At a Tuesday Walt Disney Imagineering press conference, Disney Parks and Resorts Chairman Thomas Staggs said: “We’re just beginning the development phase on this project.” These plans will include heavily themed recreations of the environments from Avatar and its sequels, to be fleshed out with Walt Disney Imagineering at the helm, in collaboration with James Cameron.

Disney CEO Bob Iger was also on hand for the press conference, and he said new the project would let park visitors “enter the ‘Avatar’ universe and explore it first hand.” 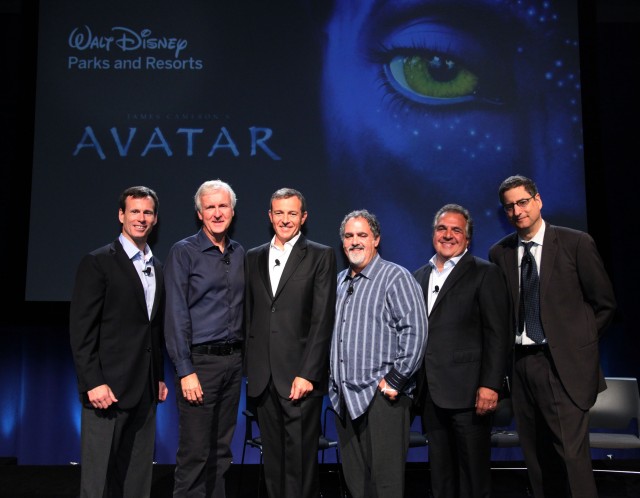 Until this announcement, I really had no desire to see AVATAR. I did see it, and while the visuals were impressive, the story was derivative, predictable, and forgettable. Those visuals, though, were something else. I’m not at all a fan of James Cameron, as I think he’s about as overrated as Michael Bay (this was a bit strong–James Cameron is much better than Michael Bay). I question whether Avatar made so much money because it was a good movie, or because it was a visually stunning movie. I prefer thought-provoking films and well-scripted drama to special effects, and his films are definitely the latter. Additionally, I would have preferred an original concept to drive Disney’s Animal Kingdom expansion, rather than relying on a franchise.

All of that said, I respect quality and think it always “outs.” From what I have seen of Avatar, it looks like an incredibly themed universe, and I have no doubt that Walt Disney Imagineering will faithfully execute the design into something absolutely breathtaking. I think the transition from Song of the South to Splash Mountain is a perfect example of this. I’m not wild about Song of the South at all (I do understand its historical significance, though), but Splash Mountain is an amazing attraction.

Likewise, I think the attractions in Avatarland have the potential to be amazing, regardless of their source material. I also think that, with the Wizarding World of Harry Potter right down the road, Disney needed to bring a high profile franchise into the fray as an appropriate response. Thus, when viewing this purely as an objective business decision, I think it is likely to be a brilliant decision that will pay great dividends. Even the best original idea WDI could have executed wouldn’t have the same built-in fanbase as a franchise, and to that end, I completely understand why bringing in something like Avatar was necessary. Overall, I think it’s very exciting news, and am really looking forward to 2015 (ha!), ’16 (haha!), or ’17 (fingers crossed) when it finally opens! 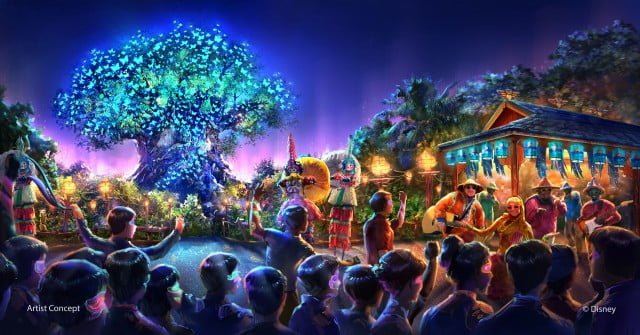 UPDATE: I am still excited about this project, especially after seeing the concept art that looks like this will be a beautiful land with an almost abstract “mythical” feel to it, which is exactly what Disney’s Animal Kingdom needs. Although I am not a fan of AVATAR and I question its long term staying power, I am not a fan of Cars, and I loved Cars Land, which I feel was wisely done with a Route 66 style and not overtly cartoonish. I feel that taking a similar approach to AVATAR Land would be wise, just in case the shelf life of the films is limited. An entire land that could grow stale is a dangerous thing–much worse than a single attraction.

Admittedly, before this concept art–which I consider to show a very promising project–I had become less enthusiastic about AVATAR Land than I was originally. In 2011, we didn’t really care about Disney’s Animal Kingdom, and thought just about anything would breathe some new life into it. I’ve since fallen in love with the park, and view it as Disney’s last “unspoiled” park in terms of thematic cohesiveness. I am still excited about the project, especially a leisurely boat ride through a beautifully lit forest and the rebirth of the “Rivers of Light” parade concept, but are cautiously optimistic about the expansion. I hope it is done with integrity for Animal Kingdom’s theme, and represents the mythical area the park has always needed, and is not an overt “World of AVATAR” shoehorned into the park with thematic inconsistencies recklessly ‘explained-away’ with overwrought backstory.)

Rest assured we’ll be covering the progress of this project…

What do you think about AVATAR coming to Disney’s Animal Kingdom? Has your opinion changed at all now that some concept art has been released? Hearing from you is half the fun, so please share your thoughts in the comments below!