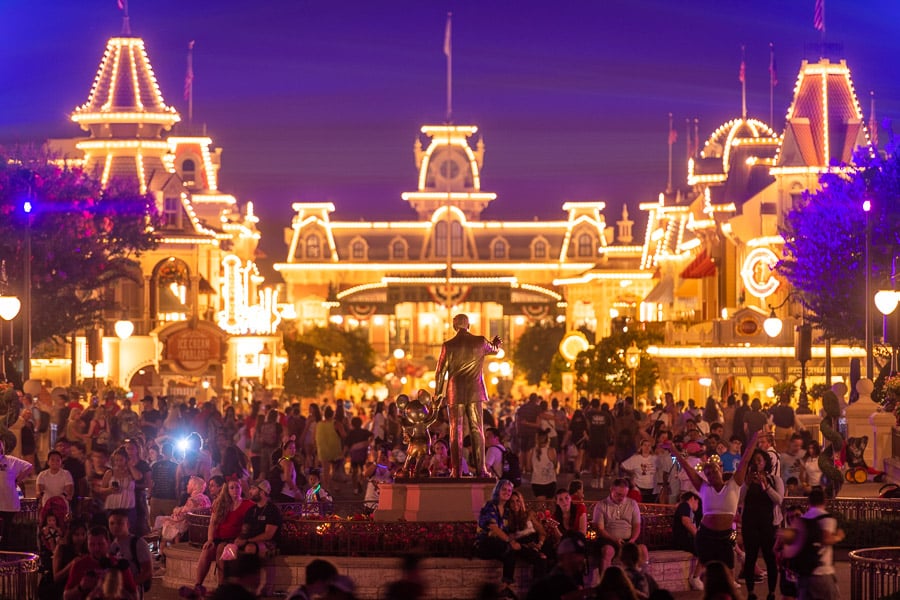 Attendance at Walt Disney World varies depending upon the day and season, with low and high wait times for popular rides also being possible based on time of day. In other words, crowds or the perception of them is highly variable–with one pretty big exception.

For most of the last year-plus, Magic Kingdom has been chaotic and congested before, during, and after the nightly fireworks. This began with the return of Happily Ever After during the summer season and only got worse with the debut of Disney Enchantment for the 50th Anniversary. As attendance has increased this year, it’s only gotten worse.

Fantasmic’s return will definitely help remedy this to some extent, although that’ll likely be offset by higher crowds during the holiday season. That plus Animal Kingdom having nothing to offer at night means Magic Kingdom and EPCOT have seen an influx of guests each evening for their nighttime spectaculars. This has resulted in some bonkers crowds, especially on and around Main Street–World Showcase is much better at absorbing guests. In short, Magic Kingdom has been a madhouse before and after the fireworks. 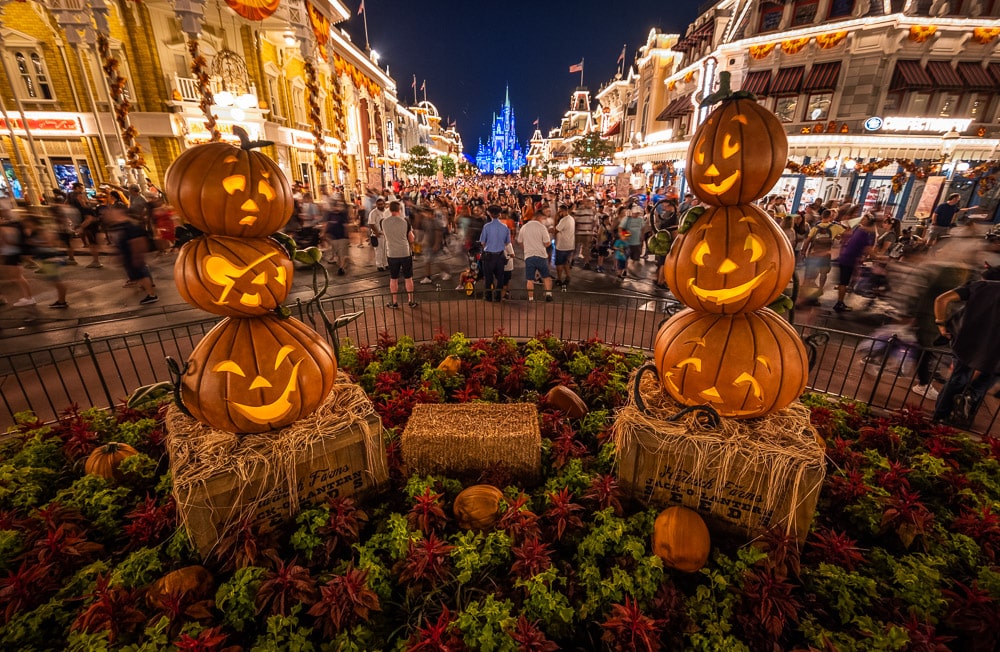 Not just on Main Street during Disney Enchantment, but also outside Magic Kingdom on the monorail system and buses that service the mass exodus of guests leaving the park immediately after the fireworks.

In all honesty, the purpose of this post is to scare you (with the best of intentions, of course). We will hopefully accomplish that feat by sharing photos of the scene outside Magic Kingdom right after the fireworks end… 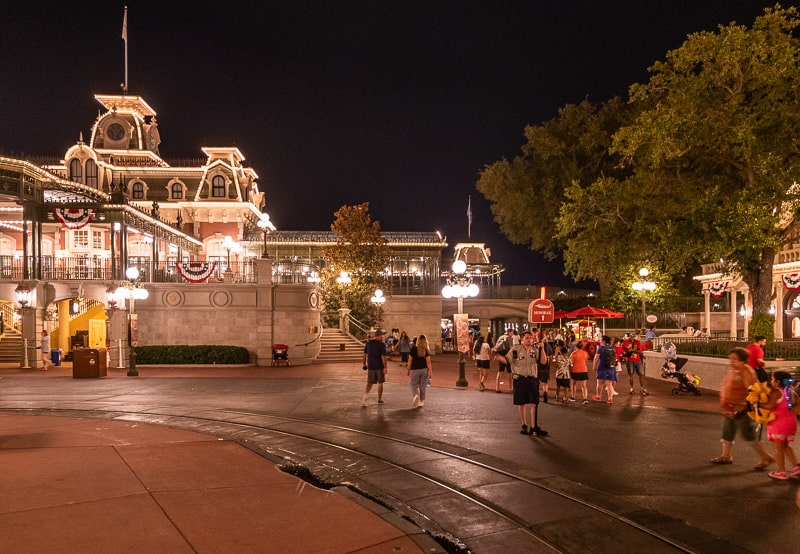 While approaching the Main Street USA Train Station, you’ll see Cast Members with signs for the monorail, boats, buses, and parking. They’ll direct you to the right or left side so you have an easier time of entering the corrals for each transportation option.

Don’t let the above photo fool you–this was taken towards the tail end of the exodus. 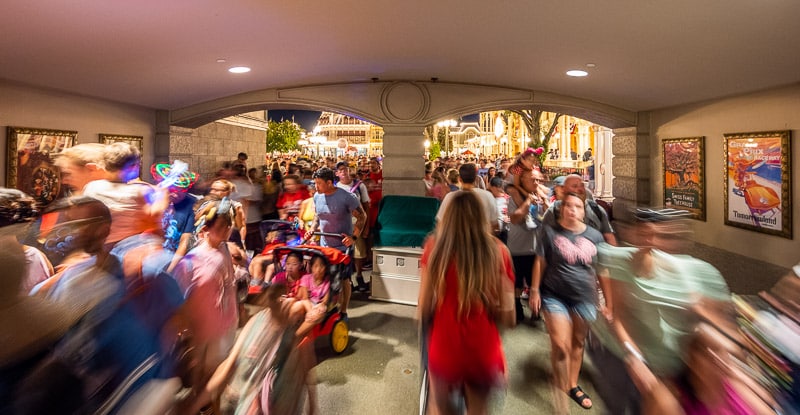 Getting through the tunnels is chaotic, as traffic merges from a large mass into a few narrow lanes.

Good luck if you need to return a stroller or stop to marvel at the Country Bear Jamboree attraction poster. It’s difficult to navigate through here. (We strongly recommend having all of your party together before going through this area.) 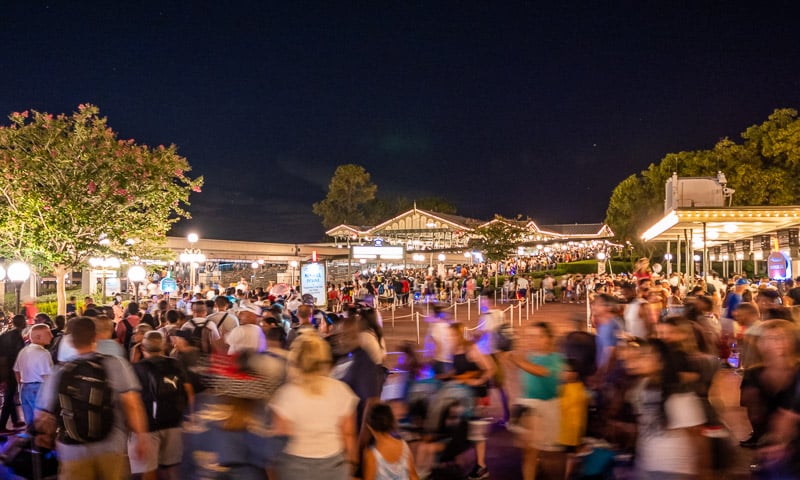 Outside the park, you can once again see the signs for the monorail, ferry, buses, parking, etc.

While it might appear that there’s some “available space” in the middle, those are switchbacks for the monorail that’ll soon fill up as more guests flow out of Magic Kingdom. 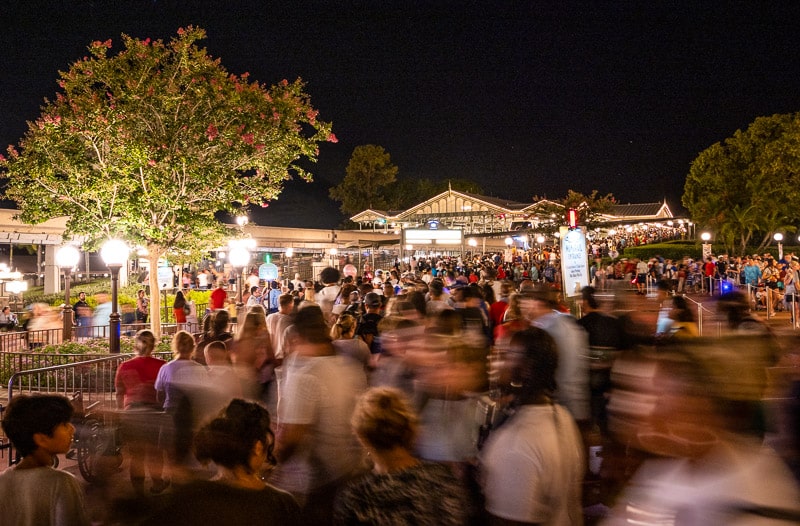 Another look at the crowd heading to the monorail.

Apologies for the photos that basically look like a “found footage” horror movie. (In a way, that’s very apt.) It’s difficult/impossible to stop for good photos amidst the chaos without being mowed down by a double-wide stroller. Justifiably, I might add. No reason to stop and impede traffic out here! (I took these over the course of several months, and these are still the best of the bunch.) 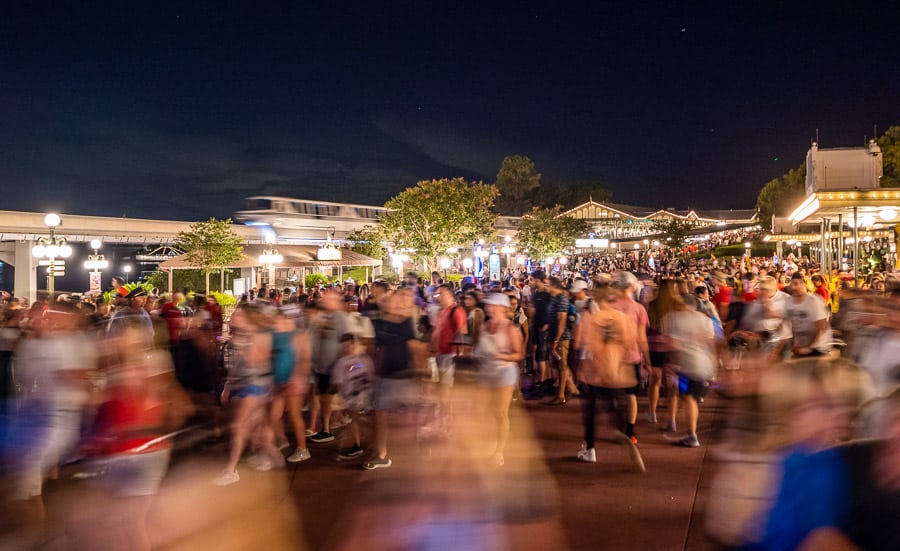 Turning the other direction, we have a look at people hustling to beat the crowds to the bus stops. Moving so quickly they literally blur through the photo!

Despite the congestion, these people actually shouldn’t have much of a wait for the buses. They’ll be at the front of the pack, and will arrive to likely find “fully-stocked” bus stops waiting to fill up with the first load of departing guests. 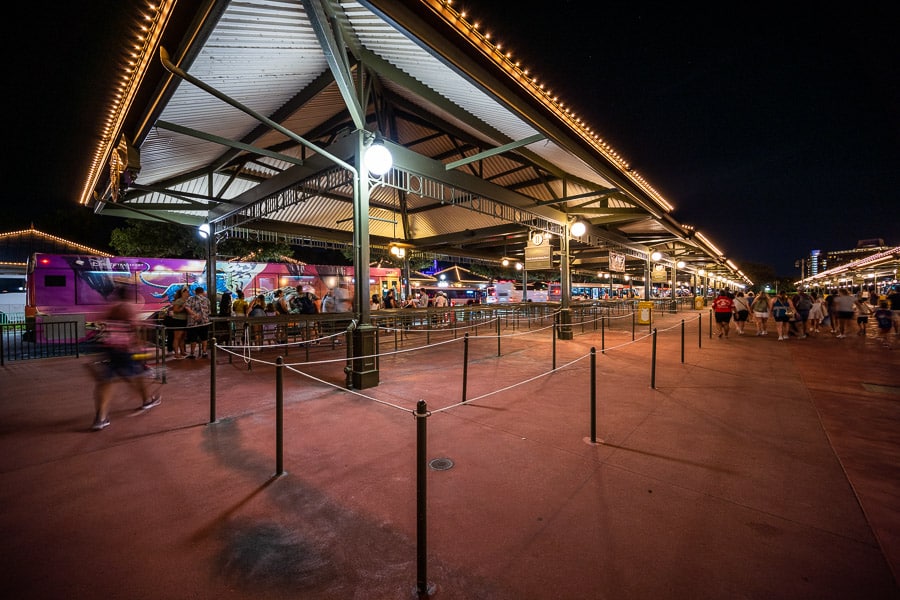 To that point, here’s a look at the bus stops at the start of the post-fireworks exodus from Magic Kingdom.

You can see the overfill switchbacks set up, but not yet in use. If you’re able to beat the crowd out, you won’t have much of a wait. You will be packed elbow to armpit with other guests, which isn’t always the best way to end of a long day after everyone has slow-cooked in the Florida sun. (It can be an, ahem, olfactory overload.) But at least the bus will load quickly and be on its way! 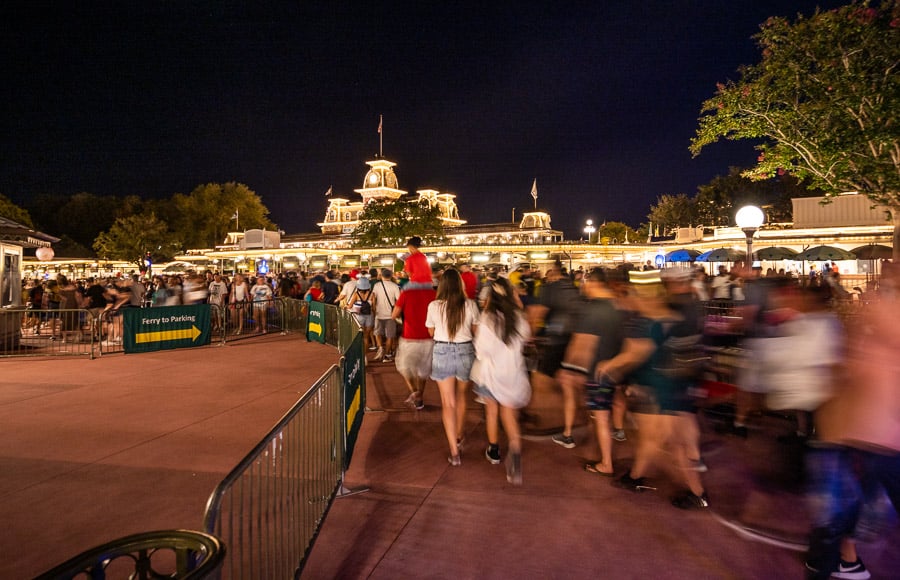 Back outside Magic Kingdom, we can start to see the overflow queues filling up for the ferry and monorail. It’s hard to tell what’s going on in these photos…and also when you’re in this mass of humanity outside the park.

To the credit of Disney’s transportation network, these waits usually aren’t too terrible–certainly not as bad as the lines would suggest–buses, monorails, and boats are deployed pretty much nonstop in an incredibly efficient manner. 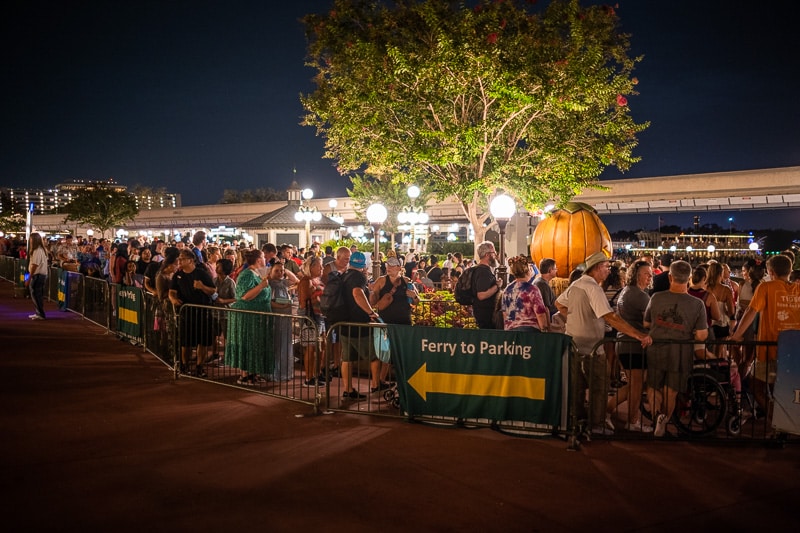 To the immense credit of Cast Members, they do a really good job with crowd control.

Some of them have fun with giving directions over their speakers, and it’s about as organized as chaos can possibly be. But there’s only so much that can be done. People are trying to go all different directions, and gridlock can ensue. 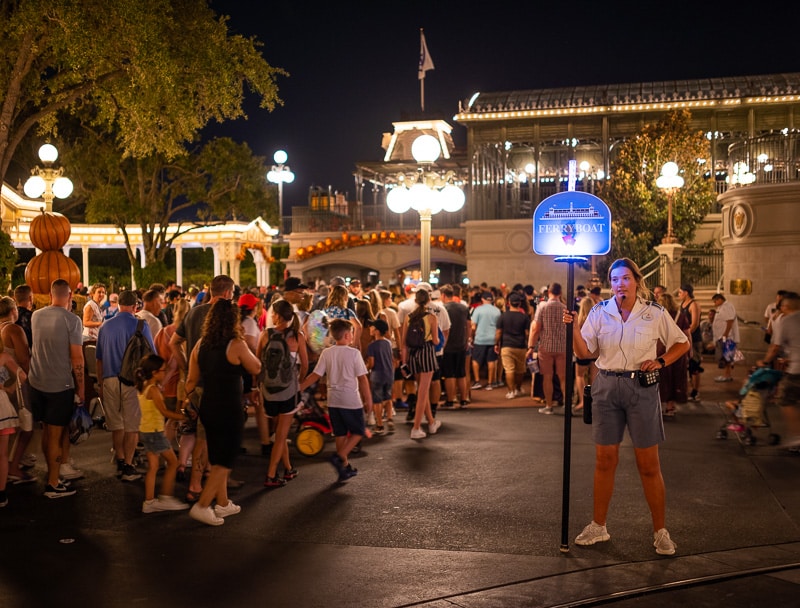 Our sincere hope is that this scares you out of leaving Magic Kingdom immediately after Disney Enchantment.

While you can beat the crowds and avoid the bulk of the congestion outside the park, that’s a gamble. Even then, you almost certainly will not be able to avoid a packed ride on the monorail or buses. 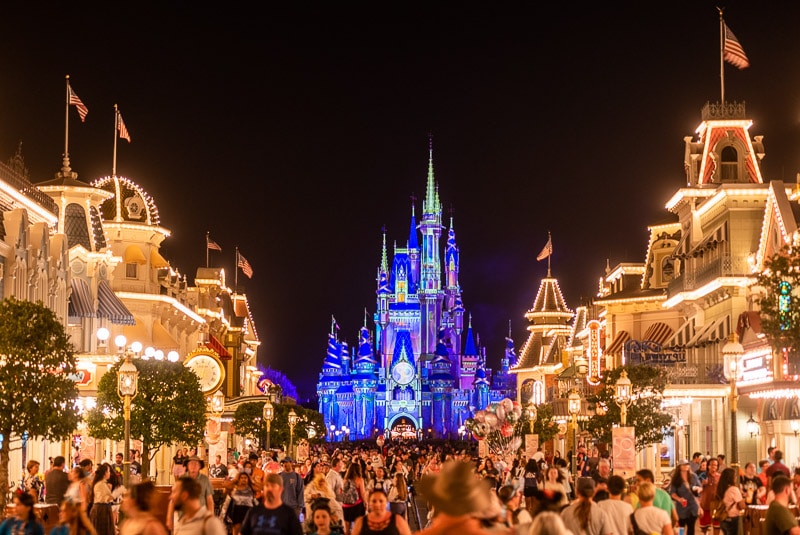 With that said, if you’re going to disregard our advice and leave right after Disney Enchantment, you really want to watch the fireworks from near the end of Main Street. 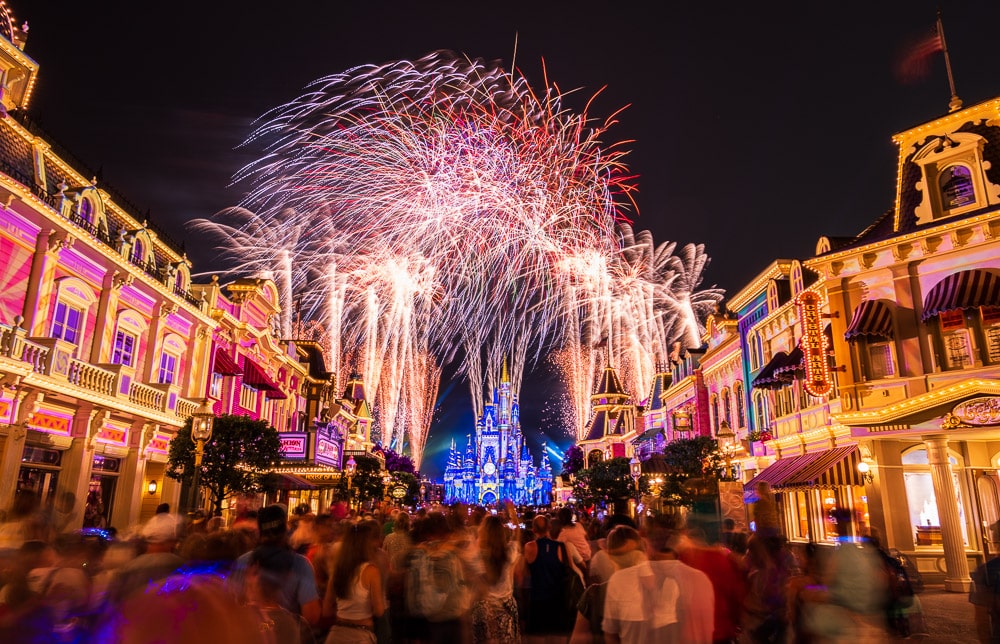 Our actual recommendation is not to leave any park right at closing. If you don’t get lucky with leaving the park quickly, you’ll have multiple monorail or busloads of other guests in front of you.

You’re going to be waiting 30+ minutes one way or the other, so spend that time on Main Street, soaking up the atmosphere of World Showcase, etc., rather than standing in an uncomfortable and frustrating bus line. 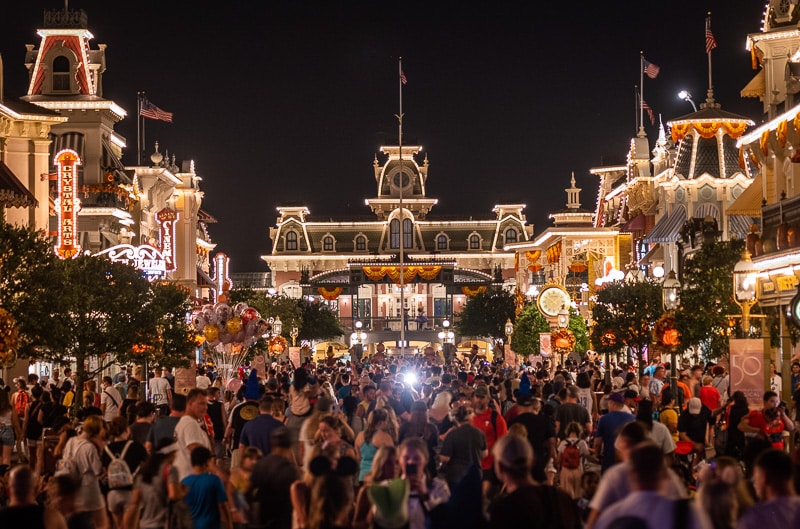 Better yet, do popular attractions!

Disney Enchantment is currently being presented nightly at 8:15 pm above Cinderella Castle. Magic Kingdom is closing at 10 pm or 11 pm nightly. That gives you ~90 minutes or more to enjoy the park after the fireworks. That’s enough to do popular rides (plural) during the most enjoyable time of day in Magic Kingdom. 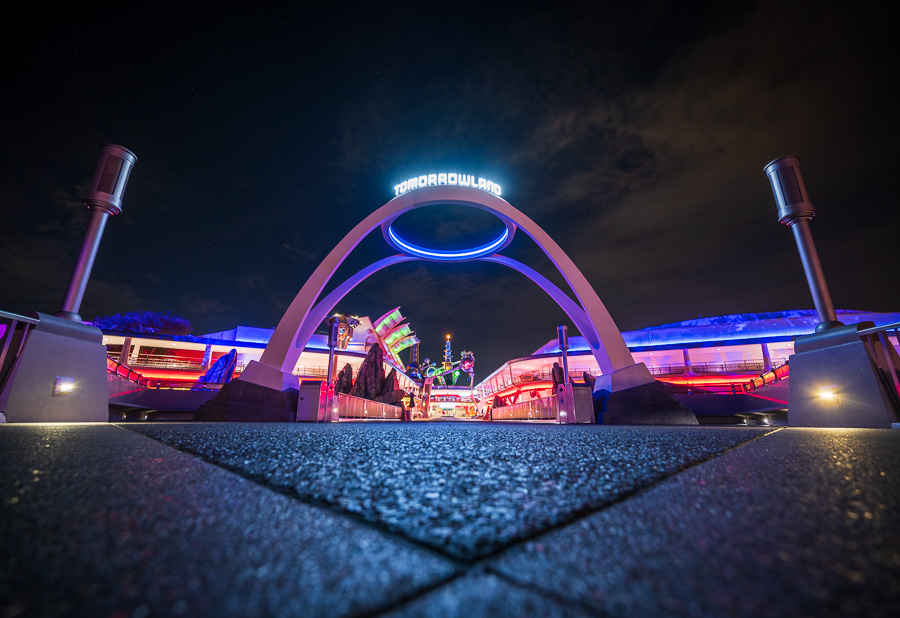 What you can accomplish varies dramatically based on crowd levels, where you watch the fireworks, park closing time, and how quickly you break out of the gridlock. In short, it’s impossible to offer strategy that’s universally-applicable.

If you don’t watch the fireworks from Main Street and instead do directly behind Cinderella Castle, we’d recommend jumping into line for Peter Pan’s Flight right after Enchantment ends. Other options include the Magic Kingdom Mountain Range, Astro Orbiter, or anything that’s better at night. It doesn’t save a ton of time, but we’re big fans of doing a late night spin aboard the Tomorrowland Transit Authority PeopleMover. 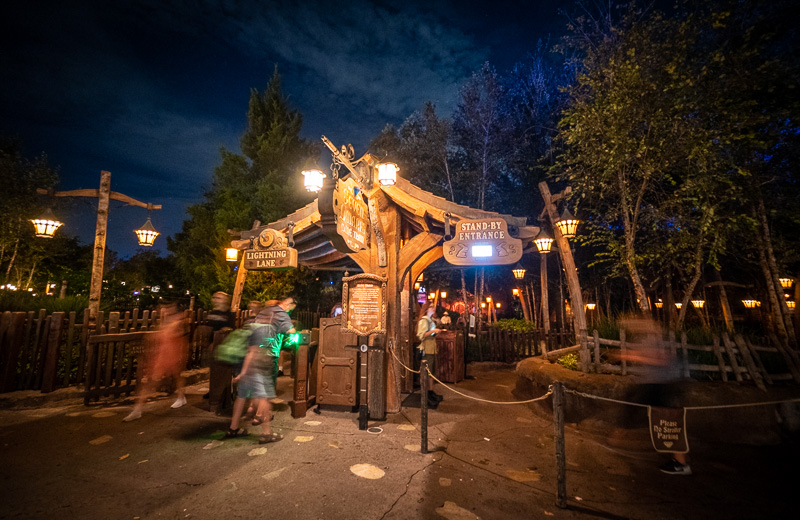 Whatever you do, our strong advice is to queue up for Seven Dwarfs Mine Train about 1 minute before park closing. Disregard the posted wait, as it’s often inflated to discourage people from lining up last minute. There are times the posted time has been 90 minutes and we’ve waited (literally) 7 minutes. Our average at this time of night is about 10 minutes, with a normal range of about 5 to 15 minutes.

The other upside to doing Seven Dwarfs Mine Train at the end of the night as opposed to earlier in the day is the atmosphere. Not thematically, but in a literal sense. The overhead fans are usually still on, and will hit you with a blast of cool air. While this is refreshing in the evening, it’s downright necessary during the day as this line can get hot and uncomfortable. (Also no standing in the sun at night!) Doing Seven Dwarfs Mine Train is so much easier and more pleasant at the end of the night, which is a big reason we’re so vehemently opposed to doing it during Early Entry or around normal park opening. 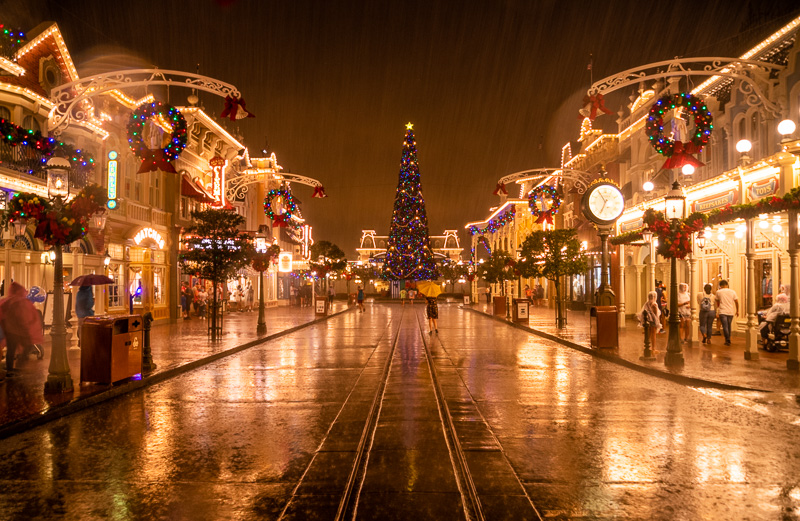 You’ll get off Seven Dwarfs Mine Train about 20 minutes after park closing, but even then, there’s no rush to leave Magic Kingdom. Slowly make your way towards Main Street, stopping to get memorable family photos in the now-deserted Fantasyland. Stop to test your strength at the Sword in the Stone. Marvel at Cinderella Castle from the backside, which is arguably prettier than the front.

Even if you take as much time as you can and it feels like you’re the only people left in Magic Kingdom, there’s a good chance the Central Plaza and Main Street will still be busier once you arrive up there. Keep going slow, soaking up the ambiance, taking more photos, or even shopping.

Walt Disney World will not strand you at the park. We’ve left (literally) 2 hours after park closing before and there was a private bus waiting for us. Buses are idling at the stop until Magic Kingdom is cleared of all guests. There’s absolutely no upside to rushing to leave in order to stand around and wait. You don’t need to leave a full hour or 90 minutes after park closing, but it’s certainly a much better idea than leaving right when the fireworks end!

Have you experienced the post-Enchantment exodus at Magic Kingdom? How bad were the crowds on the evening(s) you exited the park following the fireworks? Do you prefer leaving immediately, or waiting out the crowds? What have you been able to accomplish in the last 90 minutes or so in Magic Kingdom? Transportation experiences upon leaving? Do you agree or disagree with our assessment? Other thoughts or concerns? Any questions we can help you answer? Hearing your feedback–even when you disagree with us–is both interesting to us and helpful to other readers, so please share your thoughts below in the comments!