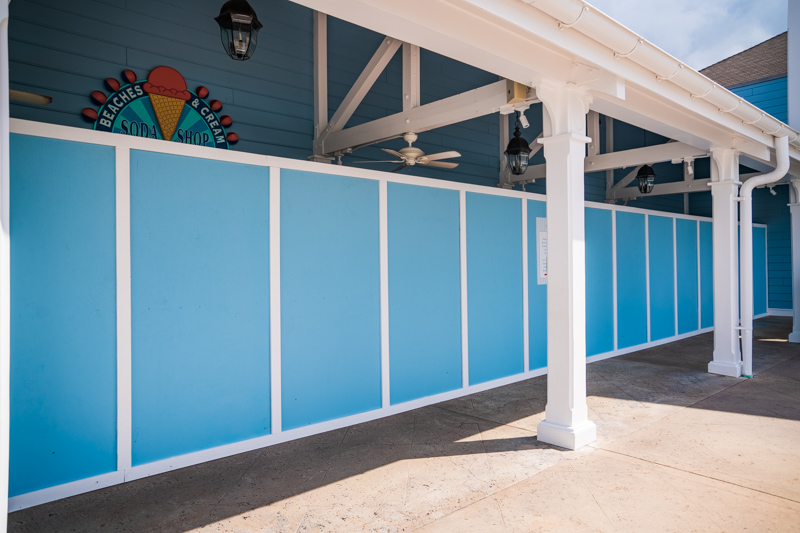 As a Walt Disney World ice cream aficionado, I pride myself in covering all of the breaking sundae news. It is thus with deep regret that I am so tardy in giving you the inside scoop on the refurbishment of Beaches & Cream Soda Shop at Disney’s Yacht & Beach Club Resorts. (Updated December 13, 2019.)

This post will remedy that unconescionable error. We’ll take a look at the temporary location, what’s on the menu, the nature of the project, and when the permanent, newly-expanded Beaches and Cream Soda Shop location is expected to debut.

Perhaps most importantly, we’ll take a look at some ice cream alternatives in the Crescent Lake area, for those wanting a refreshing dessert while strolling between Disney’s Hollywood Studios and Epcot…

The Beaches & Cream closure was first announced early this year, and at that time was slated to begin at the end of summer, finishing up in Fall 2019. That ended up being delayed, new ADRs opened up, Beaches & Cream remained open for another month, and millions (approximation) of Walt Disney World ice cream lovers rejoiced.

Subsequently, permits were filed for the project, which indicated it would expand into the adjacent spaces of Lafferty Place Arcade and Ariel’s Restaurant. The latter is a private event space for Disney’s Fairytale Weddings and is actually the location of the temporary Beaches & Cream, located inside Beach Club and next door to Martha’s Vineyard lounge.

That’s where Beaches & Cream’s temporary shop is set up through the holiday season (more on this below), and anyone visiting before Christmas 2019 will experience this makeshift version of Beaches & Cream. However, we have an update on the permanent reopening… 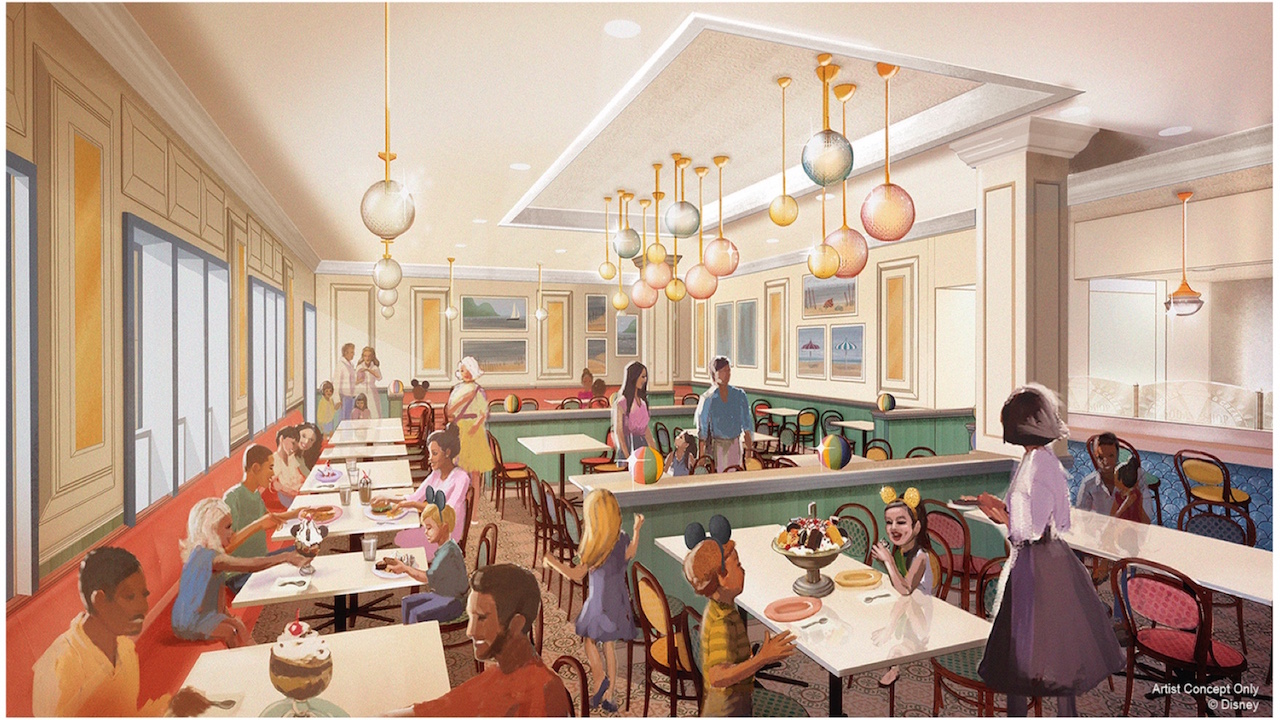 DECEMBER 2019 UPDATE: The Disney Parks Blog has released new concept art, a description of the updated decor and expanded seating area, and a few new menu items. Additionally, Disney has stated that Beaches & Cream will reopen on December 26, 2019. (We’ll have a full review of the new venue and menu items shortly thereafter.)

While we’ll withhold final judgment until seeing the new-look Beaches & Cream in person, the above concept art does not instill a lot of confidence. If we wanted Edy’s at an IHOP, we’d save the money and simply go to an IHOP. Hopefully, this concept art (which we should note shows the new seating rather than the ‘classic’ counter soda shop area) downplays the expanded Beaches & Cream’s themed design.

For us, Walt Disney World dining is in large part about ambiance and themed environments–there’s a reason we love Sci-Fi Dine-In Theater, and it isn’t the world-class cuisine. If the theme of Beaches & Cream is genericized, there’s really no reason to continue going there over the nearby alternatives discussed below, all of which offer far superior ice cream. 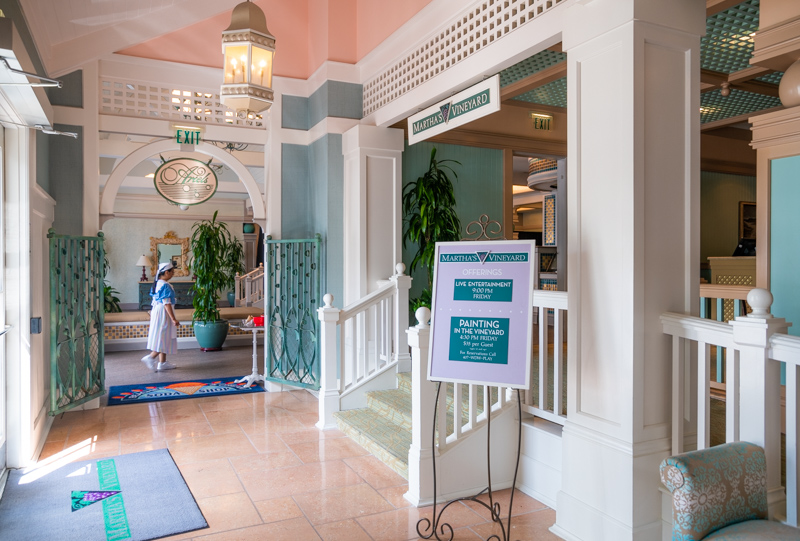 Work on the Beaches & Cream refurbishment and expansion kicked into high gear around October. Construction walls went up around the exterior facade of the restaurant. 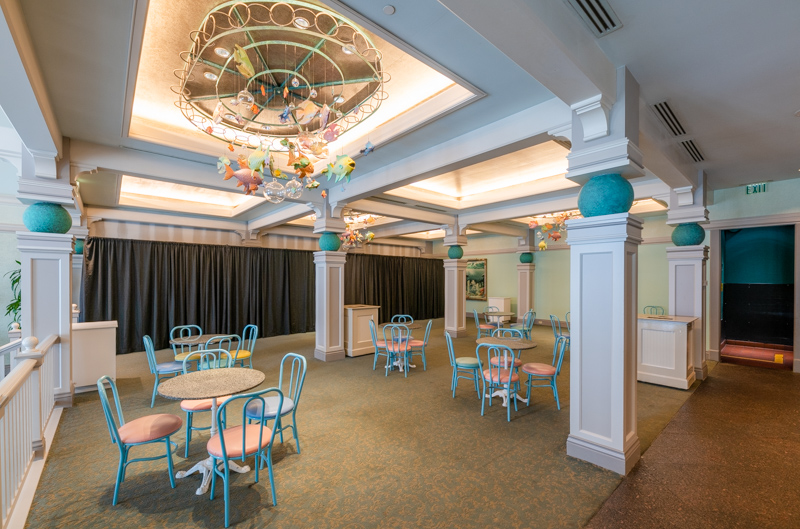 As of the start of this project, we don’t know if this is a simple refurbishment and seating area expansion in the style of the existing design.

We’re hopeful that it’s not a wholesale re-imagining. Not that we question the judgment of Disney’s interior designers when it comes to stylistic choices, but…actually, we totally do. 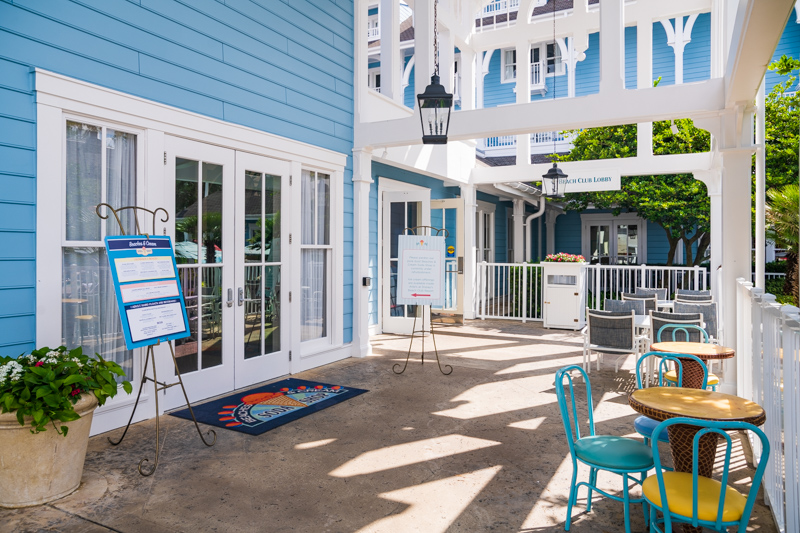 Beaches & Cream Soda Shop is pitch perfect, as-is. It doesn’t need a bland and generically modern interior, like Ale & Compass. It doesn’t need to feel like hipsters moved into an old barn and found some zany and eclectic decor on clearance at Anthropologie, like half the restaurants at Disney Springs.

Beaches & Cream Soda Shop is iconic for its whimsy, pastel colors, and charming vibe. An enormous part of the appeal is that it could be the setting for Back to the Future, or the drugstore soda fountain where the father in Carousel of Progress takes one of those new-fangled trolleys down to meet the boys for a cold sarsaparilla. 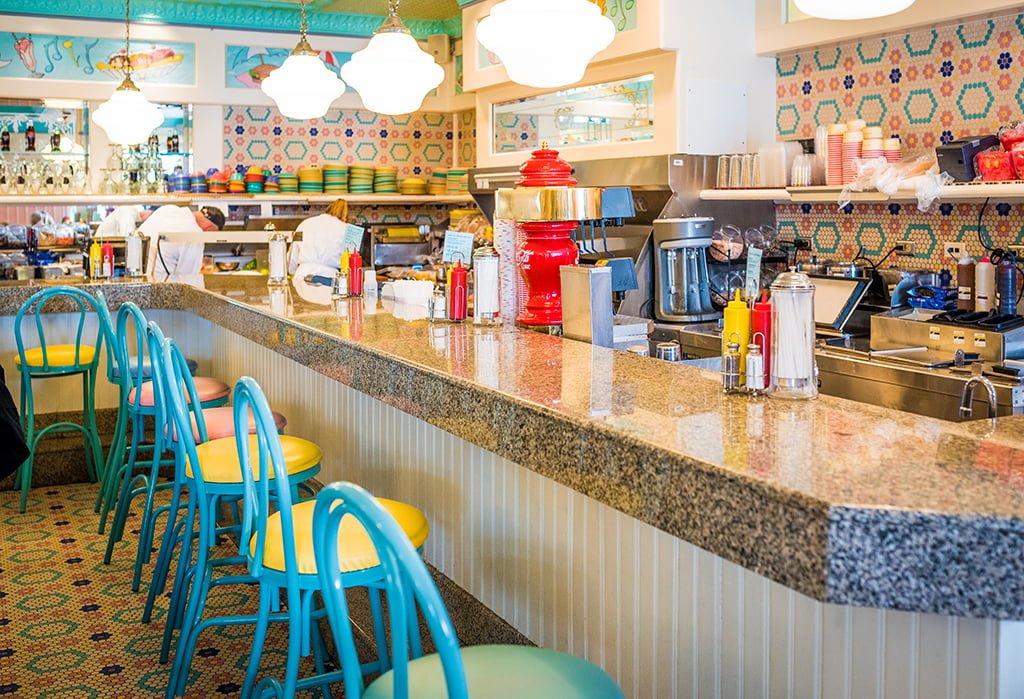 In fact, the themed design and ambiance is so integral to Beaches & Cream Soda Shop that we hesitate to recommend it during this refurbishment. The temporary seating area in Ariel’s is fine (the outdoor seating adjacent to Stormalong Bay is better), but it’s nothing special.

This shouldn’t come as a huge surprise if you’ve read our previous posts on Beaches & Cream. We’ve noted that all of the ice cream creations here use off-the-shelf Edy’s, and what gives them appeal is the combination of toppings, presentation, and the superlative atmosphere of Beaches & Cream Soda Shop. 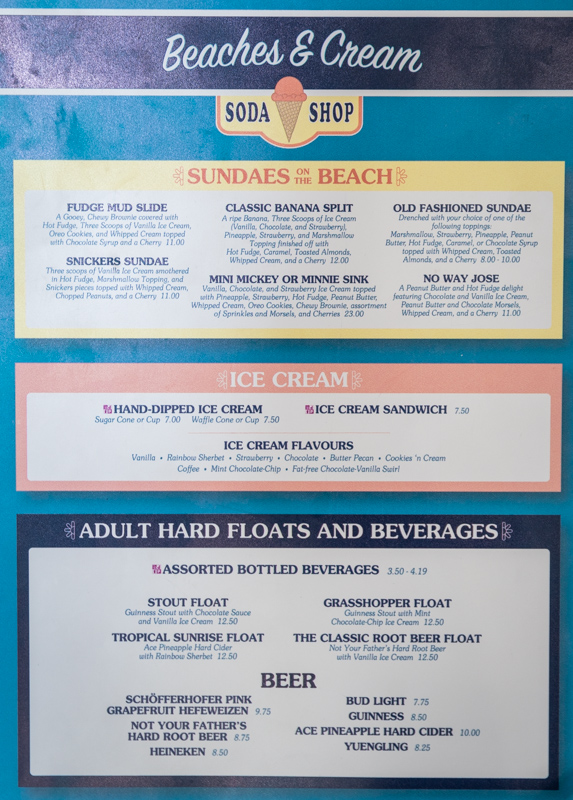 In short, Beaches & Cream is a great experience, a state of mind, a way of life, or even a philosophy for humanity and virtue. It may or may not be all of those things, but it is not a great ice creamery. If you take away the soda shop, you’re left with a bunch of average ice cream concoctions.

With that said, you can still get the famous No Way Jose and other sundaes. However, you cannot order any of the regular food menu, nor can you get any version of the Kitchen Sink or any milkshakes. 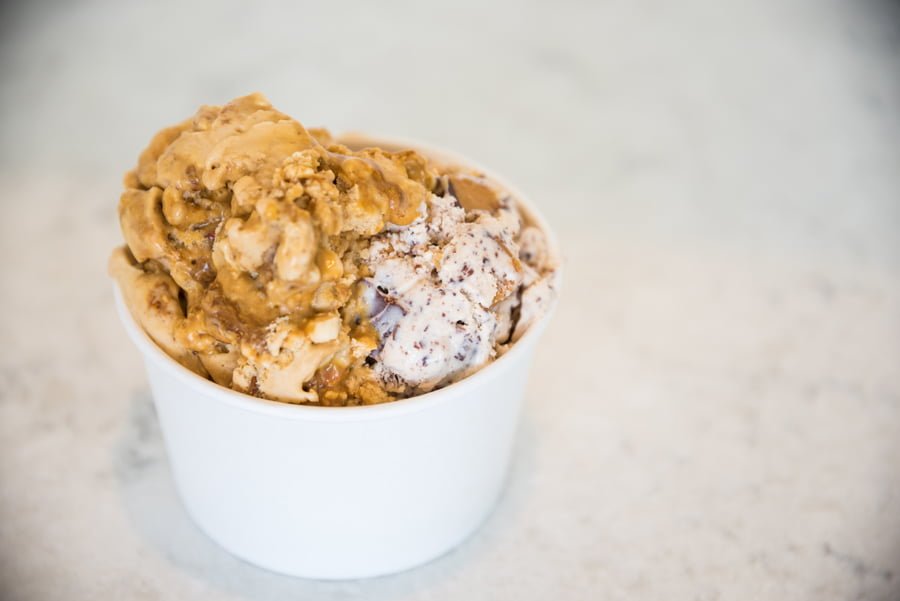 Rather than going for the truncated Beaches & Cream experience, we instead recommend a few alternatives during these trying times while soda shop itself is being refurbished. The first and most obvious one is Ample Hills Creamery. 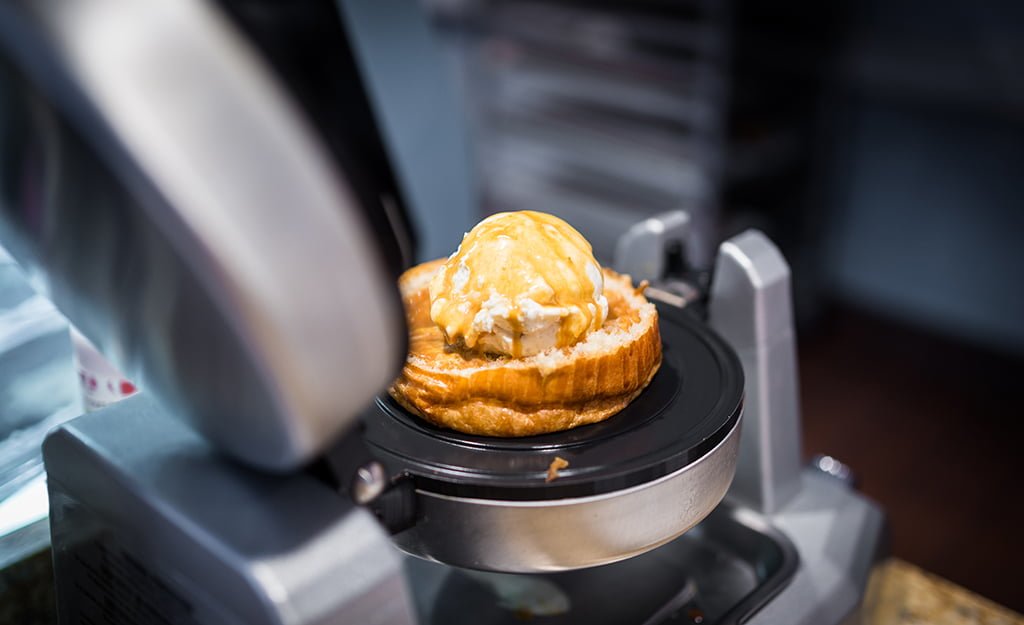 If you’re looking for a Kitchen Sink substitute, consider the Fountain over at the Swan & Dolphin. There, you can order the $29 “Fountain Funnel,” which has your choice of seven ice cream flavors, three sauces, and three toppings along with whipped cream and a cherry. It doesn’t have the same fanfare or novelty, but if you’re looking for a gigantic and shareable dessert that will give brain freeze to your entire family, that’s your best bet at Walt Disney World right now!

As for the future of Beaches & Cream Soda Shop, a lot remains to be seen. As noted above, it’s still expected to reopen in time for the busy holiday season at Walt Disney World. However, project dates are always subject to change, nothing has been officially announced, and this did get off to a slow start. We’ll keep you posted as we learn anything new about the Beaches & Cream Soda Shop refurbishment and expansion!

What are you expecting from the Beaches & Cream Soda Shop project? Think it’ll maintain the same style and intimacy? Planning on visiting the temporary location, or expanding your ice cream horizons during this construction? Do you agree or disagree with our assessment of skipping the temporary Beaches & Cream during this refurbishment and expansion? Any questions? Hearing your feedback–even when you disagree with us–is both interesting to us and helpful to other readers, so please share your thoughts below in the comments!