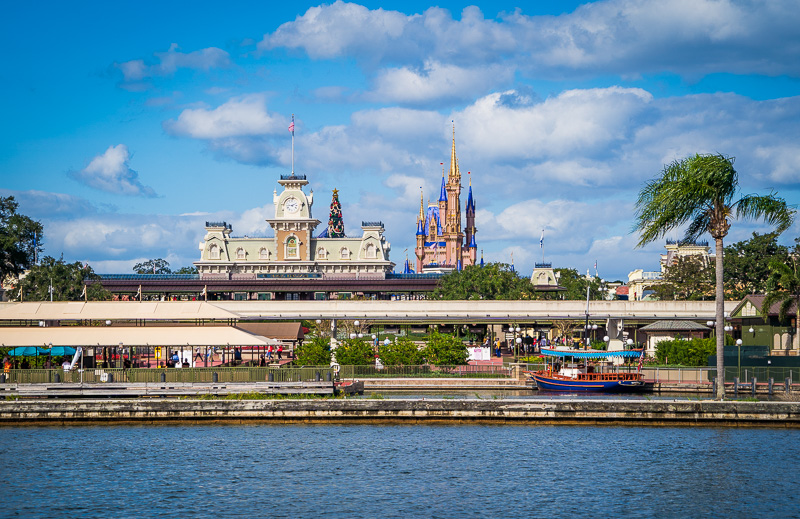 Looking for the perfect place for Thanksgiving dinner or a Christmas meal near Magic Kingdom? This post details our recent restaurant experience, which we think is the best value holiday feast at Walt Disney World. It’s not a traditional choice, but it’s better than most alternatives, and does not require Advance Dining Reservations. (Updated November 25, 2021.)

If you’re visiting for Thanksgiving, you likely know that it’s the busiest week of the year at Walt Disney World (so far). You’re going to encounter heavy crowds, high wait times, and long lines in Magic Kingdom during the holidays–even for food. That’ll likely happen again numerous times during the weeks of Christmas and New Year’s, making this a savvy strategy then, too…

One of the things we recommend doing right now if you’re visiting Magic Kingdom is either heading back to your resort for a midday break or doing a long table service meal. Basically, a reprieve from the crowds during the busiest time of day.

There’s also the unfortunate reality that the dining scene at Magic Kingdom right now leaves a lot to be desired, especially if you’re not able to score ADRs at one of the more popular spots. Magic Kingdom’s counter service lineup is the weakest of all four parks at Walt Disney World.

Anyway, this recommendation starts with taking the boat to Fort Wilderness for a leisurely escape from the hustle and bustle of Magic Kingdom, and a full-on feast… 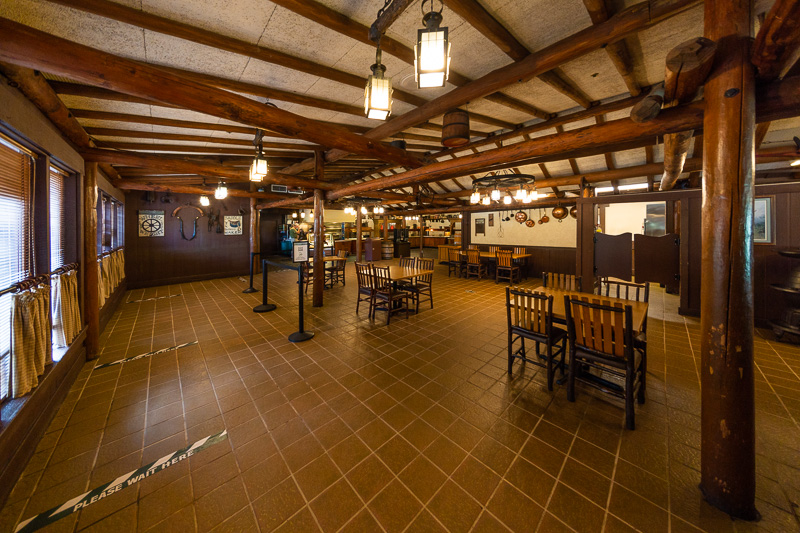 Despite high attendance levels at Magic Kingdom and what looked like solid guest numbers around the campsites and cabins, there was literally no one inside here when we picked up our food. You’ll almost certainly see a bigger “crowd” than that, but still worth noting. 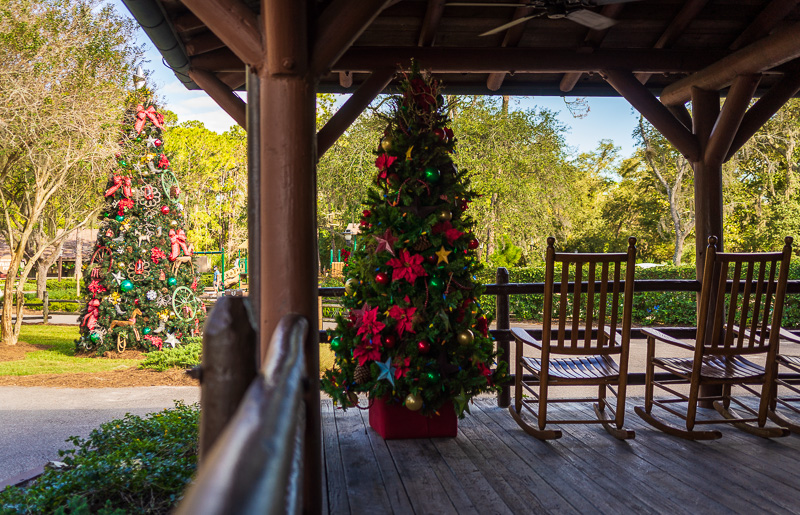 While inside the restaurant is no longer an option since Trail’s End has reopened, there’s plenty of seating all around the Settlement area of Fort Wilderness, including the patio and picnic tables closer to the beach.

We dined at one of the picnic tables on the patio with this great view. The only thing that could’ve made this better is eating on the rocking chairs, but that’d be a recipe for disaster given our clumsiness. There’s a reason virtually every shirt I own has food stains on it. 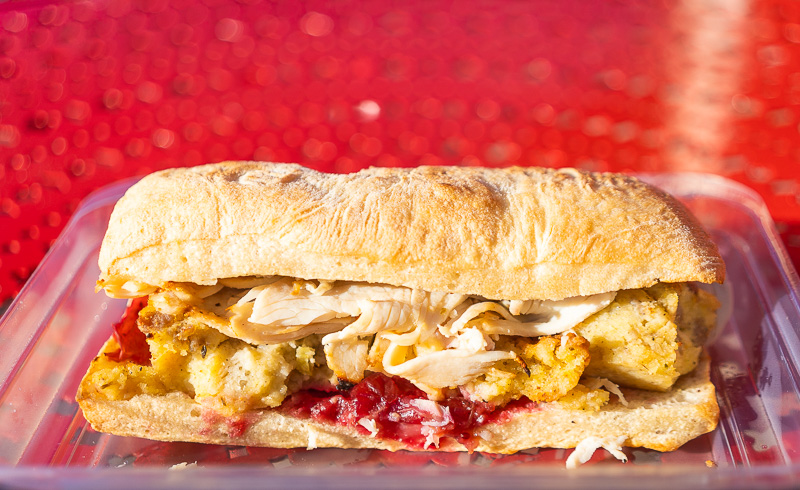 On the topic of Thanksgiving foods, here’s the Turkey Gobbler Sandwich, featuring House-smoked Turkey Breast on a Tuscan Roll with Cornbread Stuffing, Gravy, and Orange-Cranberry Sauce.

This is served at a number of restaurants around Walt Disney World for the holiday season this year, including P & J’s Southern Takeout. A handful of locations have served similar twists on this in the past, but I’ve never seen it with such a widespread presence. I’m a fan of both its ubiquity and its taste. 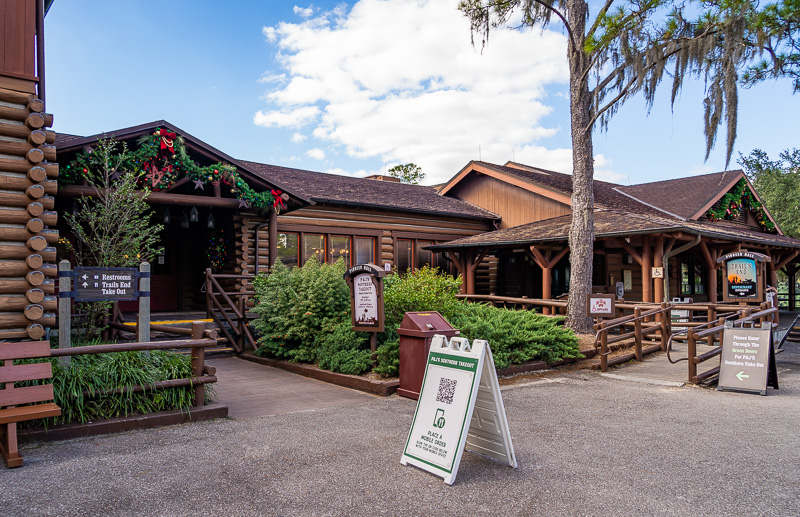 We didn’t order either of those for this Thanksgiving feast. Instead, we went for one of the Family Style meals: the Full-Slab Barbecued Ribs and 8-Piece Fried Chicken Family Meal.

From the menu: “Served with Cornbread and your choice of four Sides: Coleslaw, Cowboy Beans, Macaroni and Cheese, or Mashed Potatoes with Gravy (Serves 4 to 6).” (Note: sometimes only smaller versions of this are available, which serve 2-4 people. However, you can combine the separate family style ribs and chicken options to accomplish the exact same thing.) 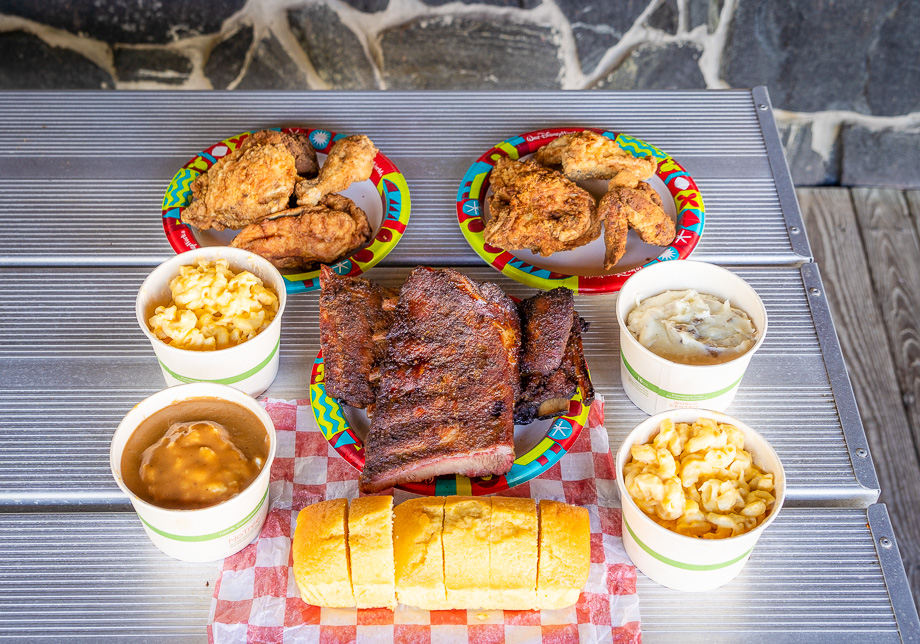 We did this fantastic feast for Thanksgiving. Now, you might claim that this is not really Thanksgiving dinner, since there’s no turkey, stuffing, cranberry, and so forth. I’d argue that abundant portions of pretty much any comfort food qualifies as a holiday-time feast.

Plus, versions of these same dishes are also on the menu at the American Adventure’s “Regal Eagle’s Distinctly Patriotic Smokehouse: A Salute to All Foods, But Mostly Barbecued Meats.” Are you really going to claim you know US history better than Sam Eagle?!? You come at the king, you best not miss. 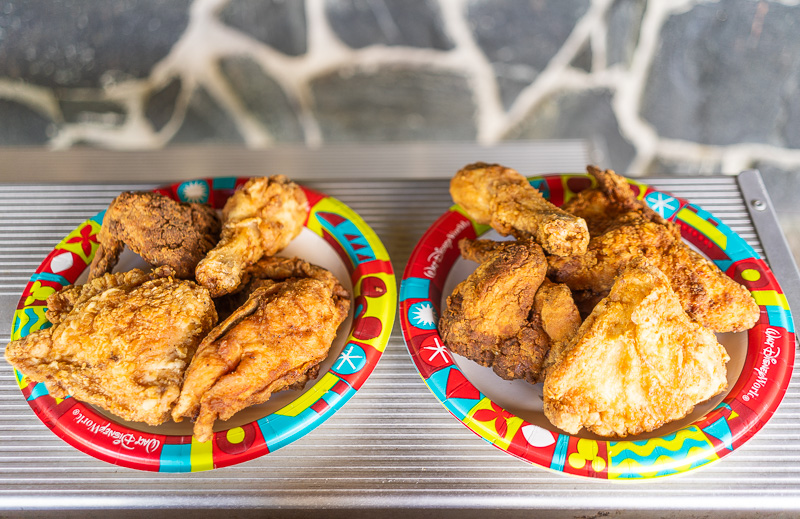 Moving along, Walt Disney World’s menu indicates that this family feast serves 4-6 people, but they also say the Mezzo Metro pizza at Via Napoli and Kitchen Sink at Beaches & Cream both serve 3-5 people, and the two of us have eaten those in one sitting. Don’t let “the man” tell you how many people it takes to conquer a meal.

In this case, the “we” here is really “me” as Sarah is trying to eat healthier right now. Fortunately, I’m trying to do the opposite. 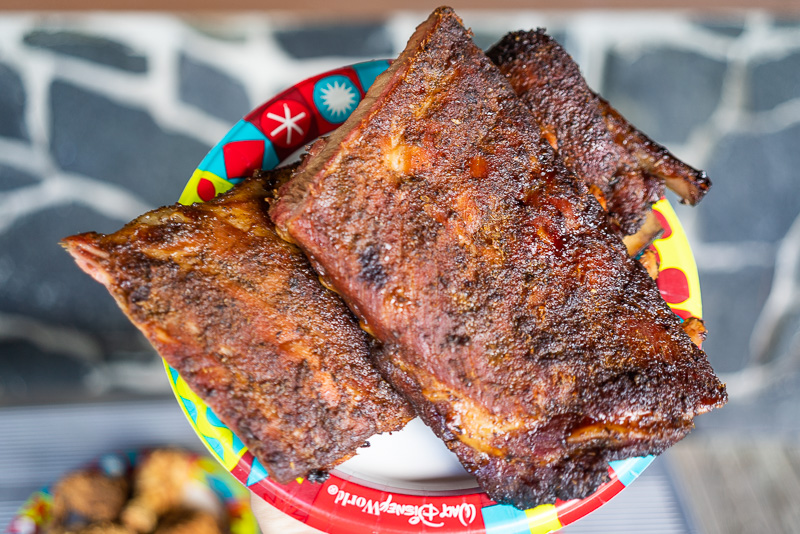 As much as I’d love to stare down this glorious feast, say challenge accepted, and attempt to devour it in one sitting, I know my limits. Maybe if I were a few years younger and still in my competitive eating prime, but alas.

Also, the ribs, fried chicken, mashed potatoes, mac & cheese, and cornbread from Trail’s End are all fantastic. Seriously, these are the best items on the buffet. Accordingly, I wanted to savor and prolong this meal as much as possible, not feel sick the rest of the day. 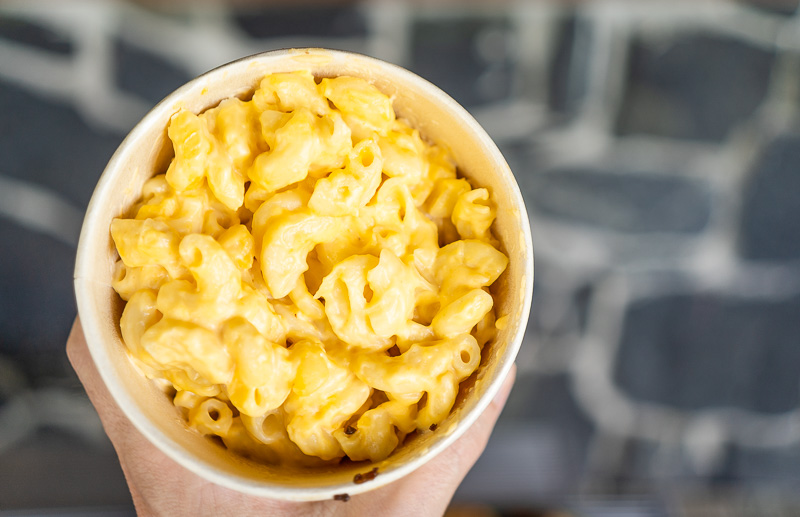 I don’t know how much of a review of this food is necessary, but to be clear: these are Walt Disney World culinary classics. If you’re a longtime Walt Disney World fan who has never dined at Fort Wilderness, modify your plans now and do this. You can thank us later.

Our full Trail’s End Buffet Reviews offers effusive praise for these dishes, but I’ll reiterate here: they’re all fantastic. I won’t say these are the best of their class at Walt Disney World because there are arguably a couple options at Disney Springs that surpass each. 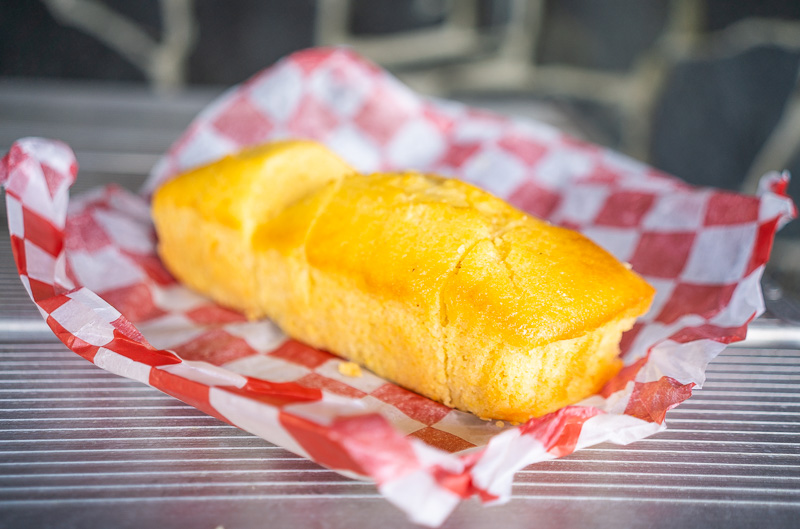 However, they’re all top 3. Easily. From the ribs right on down to the cornbread.

Everything here is at least on par with what’s served at Whispering Canyon Cafe over at Wilderness Lodge, to put things into perspective. (And this will cost all but the biggest eaters far less than those skillets.) 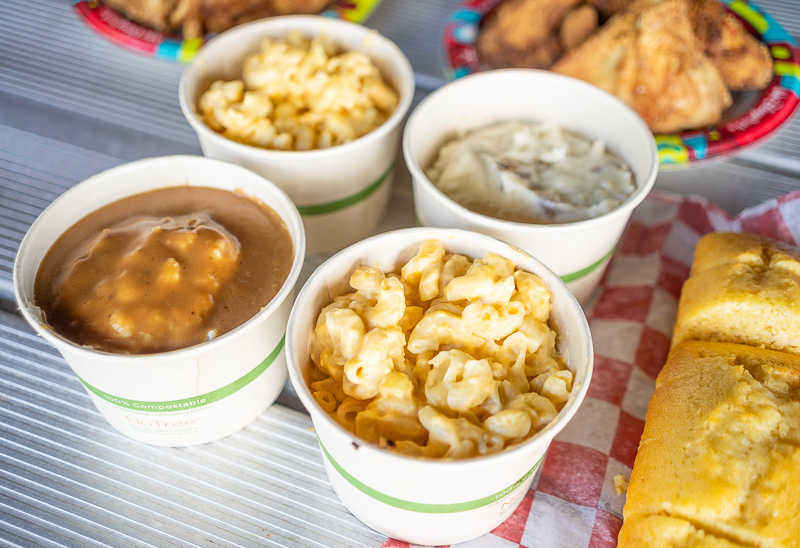 This high praise does not apply to the coleslaw or cowboy beans. This might be a controversial stance, but coleslaw and beans are a waste of my time and stomach space.

Not to go off on too much of a tangent, but I immediately discard the opinion of anyone who tells me beans are a “must order” anywhere. Beans are beans. At their absolute best, they can be pretty decent. Still nowhere nearly as good as even mediocre mac & cheese or mashed potatoes. I’m sorry if this offends your culinary sensibilities, but beans are, quite frankly, the side item equivalent of turkey burgers. 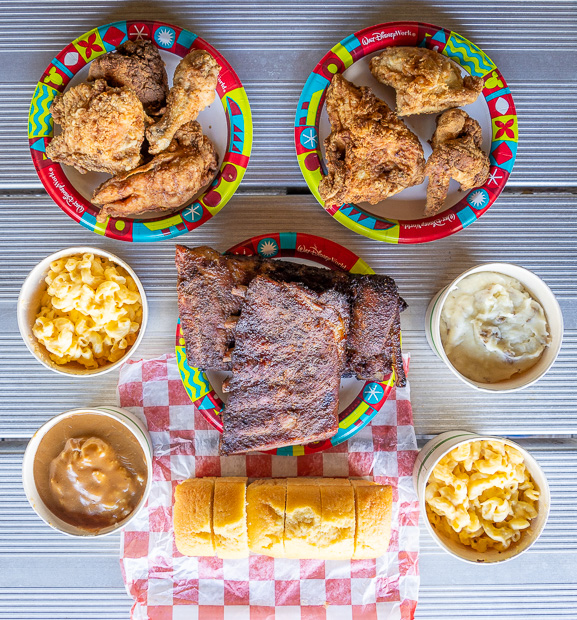 The total cost for all of this food was around $50 after tax. That’s a lot of money, but this is also a lot of quality food. Again, this is the same stuff that used to be served at Trail’s End, which now costs ~$30 per adult. Granted, that’s an all-you-can-eat meal, but there are obvious limits on how much the average person can or will eat.

I ended up eating four full meals from this Trail’s End family feast. To put that into perspective, four meals at the Trail’s End family style meal would cost roughly $150 after tax and tip (less AP discount). Granted, I would’ve eaten more at each of those meals, but the food wouldn’t have been as good. 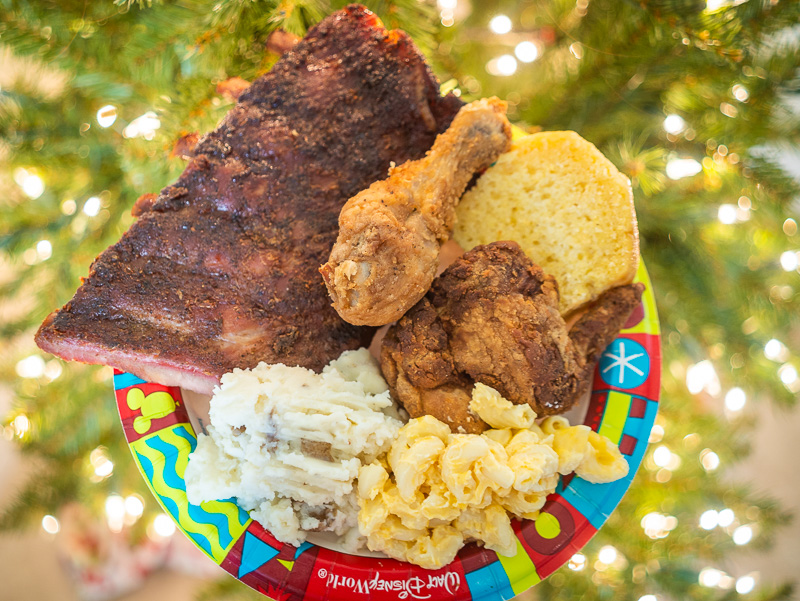 The total cost comes out to about $13 per meal for this, or one-third of the cost of the Trail’s End family-style meal (above is what one ~$13 plate looks like). And again, this is the more “authentic” Trail’s End experience. And the more delicious one, since ribs & fried chicken are far superior to rotisserie chicken & andouille sausage. (Seriously, the new family-style menu at Trail’s End is heresy.)

Given the price and overall quality of the food, we’d consider the family feasts at P & J’s Southern Takeout a bargain by Walt Disney World standards. This is realistically on par with the “real world” prices we pay for comparable meals at 4 Rivers Smokehouse when doing takeout there. That’s saying a lot. 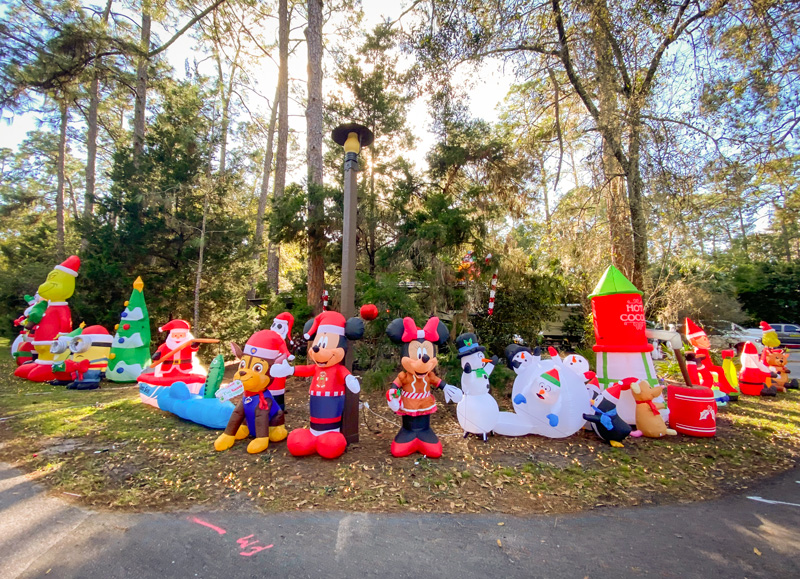 If you want to burn off some calories after that holiday feast, we’d strongly recommend a stroll over to the new Tri-Circle-D Ranch, home to the “Happiest Horses on Earth” plus a variety of historic displays. It’s cool and well checking out. (If you’re doing dinner, head there first–the ranch is only open 10 am to 3 pm.)

From there, wander down to some of the loops to check out the ambitious decorations, including the one site that looks like it raided a Home Depot’s inflatables aisle. (Mad respect.) 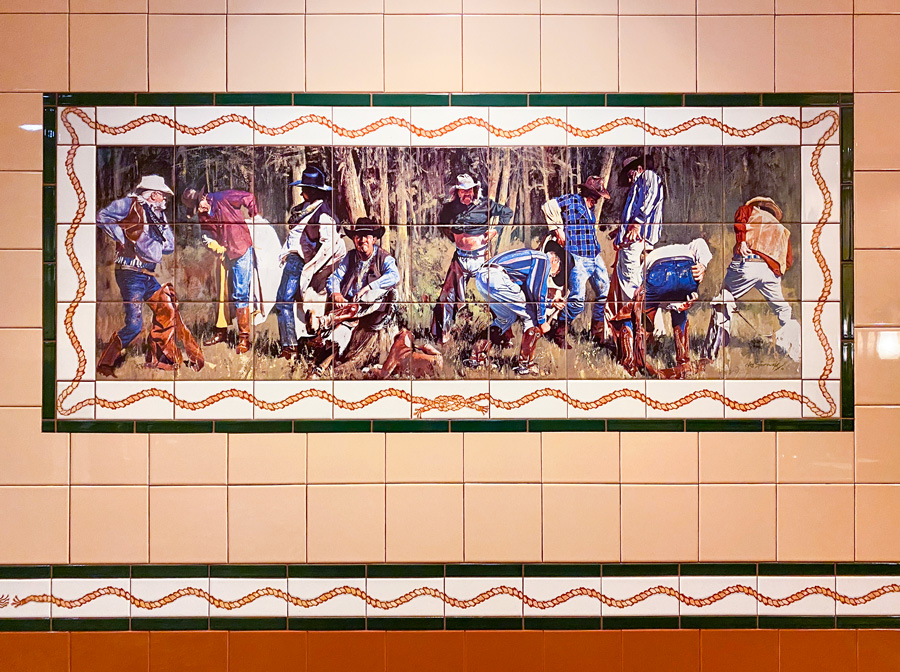 Of course, no visit to Disney’s Fort Wilderness Campground and Pioneer Hall would be complete without a stop at this majestic mural that graces the gallery of Fort Wilderness, but belongs in a museum.

Always have to stop in to pay my respects to this fine art on any visit to Fort Wilderness. (If you know, you know.) 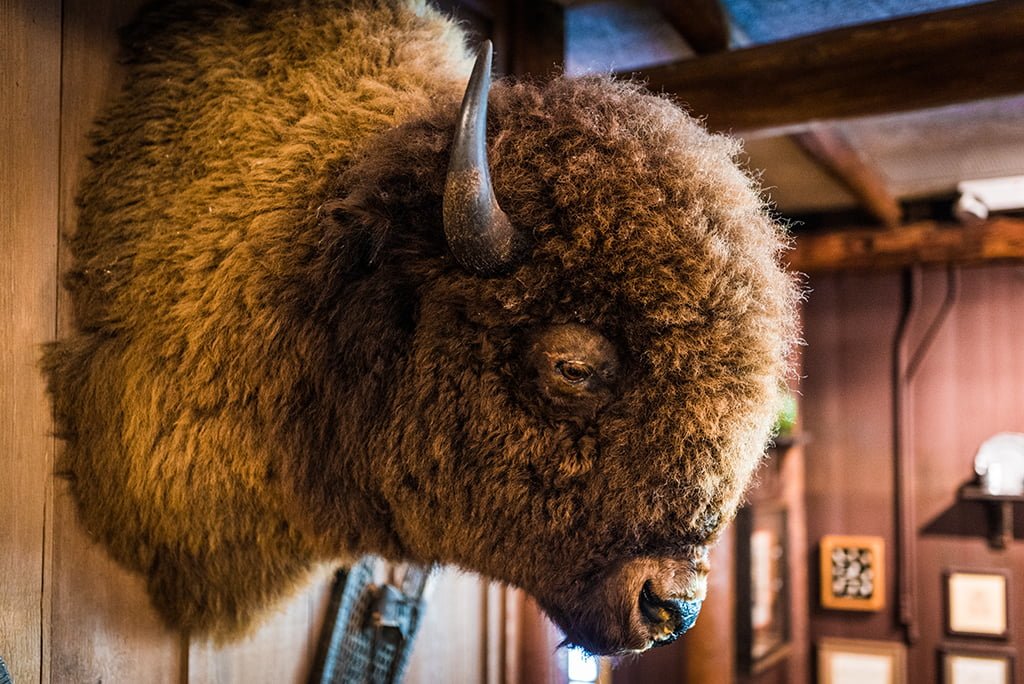 Ultimately, it should be easy to see why P & J’s Southern Takeout is the best restaurant at Disney’s Fort Wilderness Campground right now. With Hoop-Dee-Doo Musical Revue still dark and Trail’s End doing a pricier family-style meal with an all-new menu, this is the only option that features “Fort Fiend” fan favorites.

With that said, a strong argument can be made for not sleeping on P & J’s Southern Takeout even when Hoop-Dee-Doo Musical Revue and Trail’s End Restaurant go “back to normal” (hopefully that actually happens). This to-go family feast is considerably cheaper than its counterparts, and serves more manageable portion sizes of those delicious dishes. It’s a great shareable option for a midday break from Magic Kingdom, and an even better pick for those staying in the excellent Fort Wilderness Cabins, which are equipped with fridges and microwaves for convenient storage and reheating.

Have you done the family feasts at P & J’s Southern Takeout? If so, what did you think of the meals? Are you a fan of these foods at Trail’s End? Considering doing this as a holiday-time feast during your holiday visit to Walt Disney World? Think this is a good idea for a relaxing escape from the midday crowds at Magic Kingdom? Thoughts about anything else covered here? Any questions we can help you answer? Hearing your feedback is both interesting to us and helpful to other readers, so please share your thoughts below in the comments!