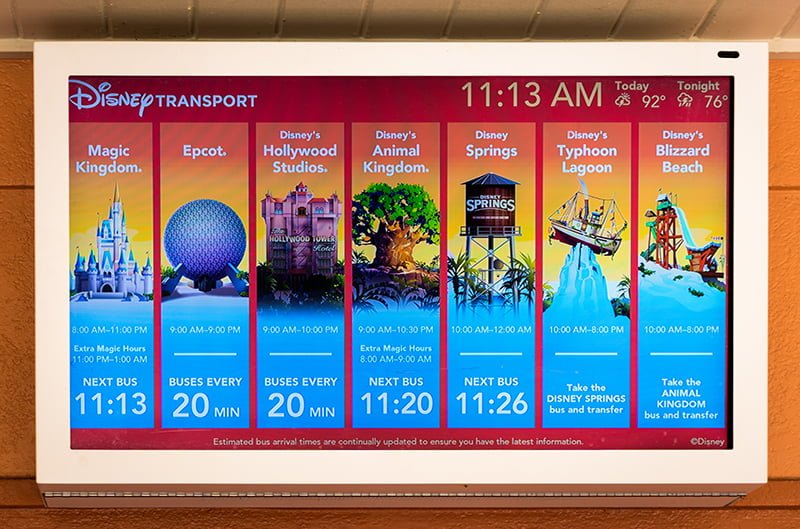 As we recently shared, bus wait times from your resort to Walt Disney World theme parks are now available in the My Disney Experience app. In this post, we’ll review the new feature, covering just how accurate these “real-time” bus departures were during our field testing at Port Orleans French Quarter shortly after the wait times debuted.

My approach with testing the bus wait times feature was perhaps a bit unorthodox and not entirely feasible for all or even most guests reading this. While staying at Port Orleans French Quarter, our room was about a 4 minute walk from the bus stop. I would thus keep an eye on the bus wait times in the app, and when a bus was 5 minutes away, I’d leave the room.

This is a very slim margin for error, but my reason for cutting it so close is because I found that about half the time, the original bus arrival time was delayed. Meaning that if a bus departure time to Magic Kingdom was listed as being 10:00 a.m. as of 9:45 a.m., there was a 50/50 chance the bus departure time would end up being delayed until 10:05 a.m.

For the most part, this was a flawless strategy. It gave me the chance to stay in the room and get work done on my laptop, refreshing the bus waits screen of the My Disney Experience app periodically, and only leaving once the bus was almost at the resort.

In the past, we’ve found waiting for a bus first thing in the morning to be a frustrating way to start the day, so it was great to stay out of the humidity and not stand around the bus stop, anxiously waiting. Most of the time, there was a bus pulling up (or even waiting for me) when I arrived at the bus stop. 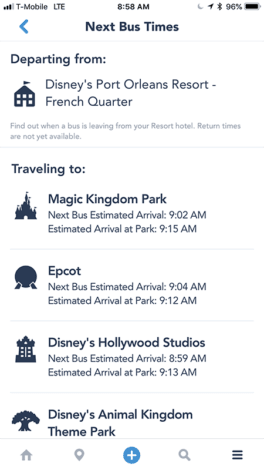 My only complaint here is that there’s not a “your bus is now arriving” option for push notifications a la Uber or Lyft, which meant interrupting what I was doing every couple of minutes to check the My Disney Experience app. I realize this is probably advanced functionality that most people would ever need, and it’ll probably never happen.

I say “for the most part” this was a flawless strategy because there were a couple of times that the bus departure time actually moved forward. On one occasion, I literally had to run to the bus stop because of this, and caught the bus just as it was about to leave.

In fairness, this was my own fault and I should’ve given myself a little more breathing room. Since these are real-time bus wait times, my guess is that they are measuring the actual progress of the bus on its route and providing an anticipated wait time based on assumptions about traffic.

Think of these times just as you would those in Google Maps, which is constantly adjusting your arrival time based upon how you’re progressing in traffic. Even something as minor as making or missing a stop light can cause the estimate to rise or decline.

This was the whole reason I waited as long as possible before leaving the room–the closer to arrival time, the lower the likelihood traffic variables would cause further delays. With that in mind, I was incredibly pleased with the overall experience of relying upon the bus wait times to plan when I’d leave our room. I’ve never spent this little time at our resort bus stop waiting. It was great. 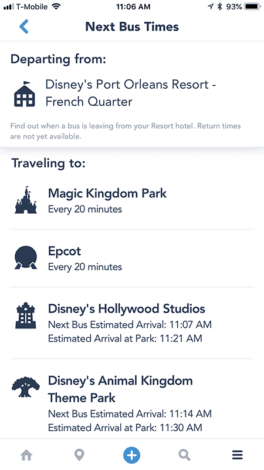 While my review of the in-app bus wait times is pretty glowing, there’s another half of this story. Sarah and I were often leaving the room at different times because, as fun as walking around in the heat and taking photos for construction updates might sound, she wasn’t always interested in that.

Rather than checking the app in advance, there were several times she just showed up to the Port Orleans French Quarter bus stop and waited…and waited. She waited over 20 minutes for a bus on 3 separate occasions, and once waited nearly 45 minutes. She experienced several delays, unreliable times on the board, and, overall, a lot of frustration.

Although not to the same extent, I experienced some of this when I went to other resorts to do the construction updates and then tried to leave for the parks. Since I didn’t have a reservation at these resorts, I couldn’t consult the app for wait times, and just showed up at the bus stop whenever. That was definitely a less pleasant experience than leaning heavily on the app.

The big takeaway here is that you should consult the wait times in My Disney Experience before leaving your hotel room, and time things accordingly. Give yourself enough time that you don’t have to run to the bus stop, but don’t head out too early. (And never leave the room when the app says “buses every 20 minutes” as that’s a giveaway that no bus is en route.) 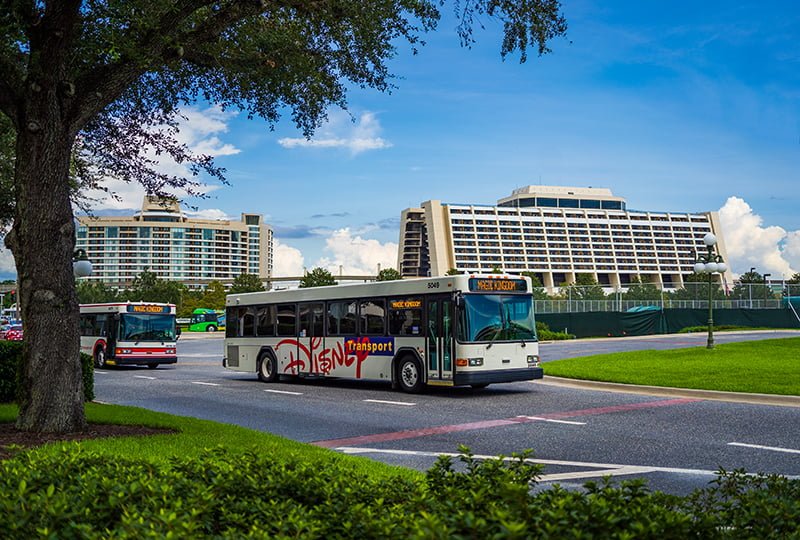 Then there’s the buses from the parks, which I guess is like a sequel to the previous two halves of the bus wait time story. It’s been a while since we’ve heavily used buses from the parks during normal operating hours. This might sound odd given the frequency of our Walt Disney World trips, but this was a bit of a blindspot for us.

During the day, we often park hop, but usually between Epcot and Magic Kingdom (monorail) or Epcot and Disney’s Hollywood Studios (walking). When we go to Animal Kingdom, we tend to stay the entire day. No matter where we start, at the end of the night, we stay until after park closing for photos and to soak up the atmosphere, slowly lingering out to find a bus waiting for us at the bus stop. We’ve heard the horror stories of post-fireworks lines for the buses, but have never experienced it ourselves.

On this trip, we didn’t stay late as often and did atypical (for us) park hopping more. In so doing, we used the buses from the parks more. A couple of times, we arrived to find huge lines of people who had been waiting a while (and were visibly frustrated). On another occasion, we waited and waited before a bus arrived. One other time, we called an audible and took a bus to Yacht Club instead of waiting for an Epcot bus and entered through International Gateway.

After that, our “data” is incomplete because we just used Lyft from the parks. As we note in our Tips for Using Lyft & Uber at Walt Disney World, we’re huge fans of these services and think they offer efficient, private transportation for affordable rates. (Although we didn’t use them this trip, Minnie Vans are another viable, albeit more expensive, alternative.)

On the plus side, this ended up working out really, really well. Uber and Lyft have become so ubiquitous at Walt Disney World that all but once, there were already drivers waiting at the pick-up areas outside the parks when we requested a ride. Obviously, Uber or Lyft cost money as opposed to the “free” service Disney buses offer, but there’s the opportunity-cost of the wasted time spent waiting for a bus, as well as the frustrations that entails.

With that said, when I think back on how we got around Walt Disney World on this trip using bus wait times and Lyft, as compared to how things went a decade ago, when we didn’t have wait times and had to use overpriced taxis when things got too frustrating, I think the experience has improved exponentially. I expect that trend to continue, as backend technology for bus deployment improves, and once the Skyliner goes online. As I’ve said before, I see zero reason for us to ever rent a car at Walt Disney World again, and I think with a similar strategy to the one here and a modest budget for Uber/Lyft when the situation calls for it, you can dramatically improve your transportation experience at Walt Disney World.

Have you used the new bus wait time feature in My Disney Experience? Do you agree or disagree with our review of the feature? Did it improve your transportation experience at Walt Disney World? Any questions we can help you answer about WDW transportation? Hearing your feedback–even when you disagree with us–is both interesting to us and helpful to other readers, so please share your thoughts below in the comments!