Tokyo DisneySea’s “Christmas Wishes” event is the park’s November and December during which time the ports get into the holiday spirit. Whereas Tokyo Disneyland does a lot along the lines of Walt Disney World and Disneyland for Christmas, everything DisneySea does is unique. For DisneySea’s Christmas festivities, there are stage shows, attraction overlays, special merchandise, and seasonal food menus.

This post takes a look at “Christmas Wishes” at Tokyo DisneySea (here’s the official page in Japanese) based upon our time in the park last year at Christmas, with photos plus my thoughts. We have a separate post covering Christmas at Tokyo Disneyland. Little has changed from last year, but keep in mind that things can change in the future, so there’s more a trip report than a strict planning post for those of you visiting Tokyo DisneySea in 2017 or beyond.

Because Christmas at Tokyo Disney Resort is so different than in Walt Disney World and Disneyland (and most readers are presumably regulars of the US Parks), a little background is in order. I already covered most of this in the Tokyo Disneyland Christmas post, so I’ll be brief.

As is the case with Tokyo Disneyland, Christmas Wishes special entertainment is included in regular park admission. This is a great value given that park tickets for regular attractions and Christmas entertainment cost under $60, making a full day cheaper than the hard ticket Mickey’s Very Merry Christmas Party at Walt Disney World alone.

A bit of this adult edge has been lost with the rise of characters in the park, but it’s still the EPCOT Center of Tokyo Disney Resort. Can you really imagine a better romantic date night than an early dinner at Magellan’s, followed by a dusk ride on the Venetian Gondolas, catching the last show of the Broadway stage show, Big Band Beat, and a romantic nighttime stroll from the Arabian Coast to the Aquasphere?

I get goosebumps just thinking of it. I’ll bet there’s a lot of risky business going on in those rooms in the MiraCosta after couples share an experience like this. I mean, how could there not be?! 😉

If you’re going as a couple, this romantic itinerary absolutely should be on your agenda (it will be crazy-busy during the Christmas season, especially weekends, so make sure to follow our 1-Day Tokyo DisneySea Itinerary for at least the morning if you want to keep your sanity), but for now let’s take a look at things on the actual entertainment slate at Tokyo DisneySea during the Christmas season…

Colors of Christmas is the main draw in terms of Christmas entertainment. This is the nighttime harbor show performed once per evening and lasting about 13 minutes. It’s pretty cool, but I have to be honest, after viewing “Candlelight Reflections” on the Tokyo Disney Resort 30th Anniversary Blu-ray before our trip, I was a bit letdown.

That’s not to say this isn’t good, that was just such an elegant and beautifully orchestrated show. It’s also a bit awkward for the tilted hat from Fantasmic to be used as a Christmas tree…the tree sort of looks like it’s falling over. 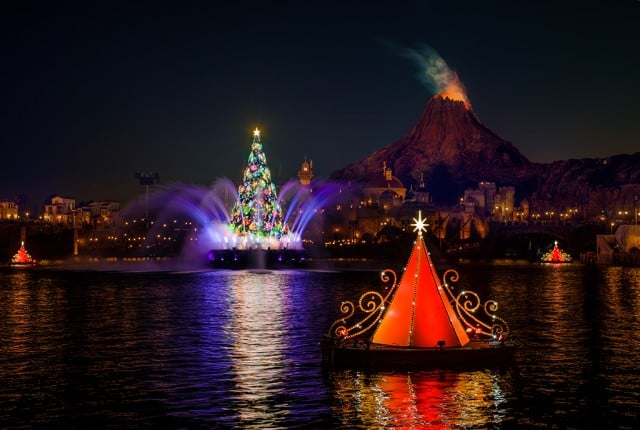 Candlelight Reflections perfectly fit that adult vibe Tokyo DisneySea aims for. By comparison, this one is more vibrant and lively, and had I never seen that video, I would have thought it was absolutely stunning.

Definitely don’t miss this, and try to grab a spot in near the front of the park, as that’s the best area of the 360-degree viewing.

Holiday Greetings from Seven Ports is the other main Christmas entertainment, occurring during the day 3 different times and lasting about 25 minutes.

The premise of this show (I think) is more or less that various characters are gathering Christmas trees from their respective ports and bringing them to Waterfront Park in American Waterfront. As is the case with many of the shows in Waterfront Park, the real star here is the choreography and the beautiful costuming.

Despite there being 3 showings of this, it’s incredibly popular, with guests staking out spots far in advance. This post on Studio Lorien takes a closer look, and this video presents the full show. 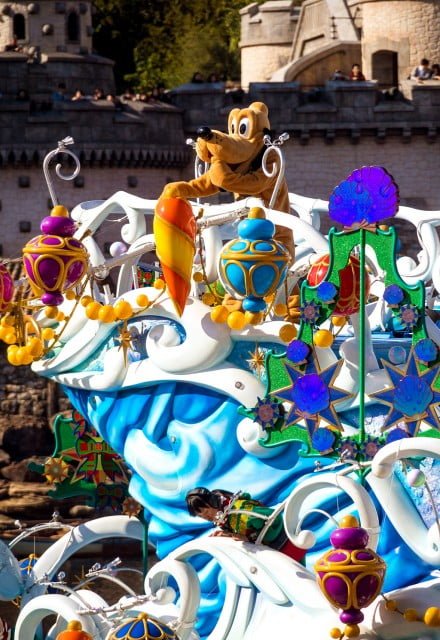 Colorful Holiday Greeting is the ‘meet & smile’ show on Lido Isle taking place in the morning. This is another popular show, but it’s mostly for the opportunity to see and photograph the characters.

I did not watch it all the way through due to the waits to get a spot, and because whenever we saw it in passing, it looked fairly superficial.

The “lesser” pieces of holiday entertainment were actually what I found to be the highlights. First is Big Band Beat Christmas Special in American Waterfront. Regular readers know I’m a huge fan of the normal version of this show, naming it to my Top 10 Best Disney Parks Shows list.

The Christmas version is even better than the regular show, which is quite a feat. Unfortunately, no photos are allowed, but you can see a sample excerpt of an old version of the show in this promotional clip to get a flavor of what it’s about. Make sure to enter the ticket lottery in the morning (every day of your visit) or be prepared to wait if you want a chance at seeing this.

The other fun holiday entertainment is A Table Is Waiting Christmas Cuisine. This is normally a love it or hate it type show, and I absolutely love it. It’s a bit on the absurd side, but a ton of fun, with catchy songs and some laugh out loud humor.

The Christmas finale is a nice touch, and I highly recommend getting a seat for this show. Try for one in late afternoon–the nighttime shows have some harsh light that make for tricky photography.

If you do happen to visit on a night during which the fireworks are running, I highly recommend viewing from the deck of the S.S. Columbia, where you can take photos with the fireworks set behind the Christmas tree.

All of this is fine, but what Christmas at Tokyo DisneySea is all about is ambiance. This shouldn’t be a shock, as it’s an ambiance park through and through, but that’s kicked up a notch for Christmas.

In addition to the norms like Christmas lights and decorations in each port, there are also Christmas trees (the premise of the Holiday Greetings from Seven Ports stage show) that are unique to each port.

These trees are incredibly clever, and are not simply normal evergreens with on-theme ornaments. They are actually the type of tree that you might find in that port.

Clever really doesn’t even begin to describe it–I’ve always loved the beautifully themed trees at Wilderness Lodge, Animal Kingdom Lodge, etc., but these rewrite the book on what “on-theme” trees should be, and in brilliant Disney fashion, gives people what they never knew they always wanted. 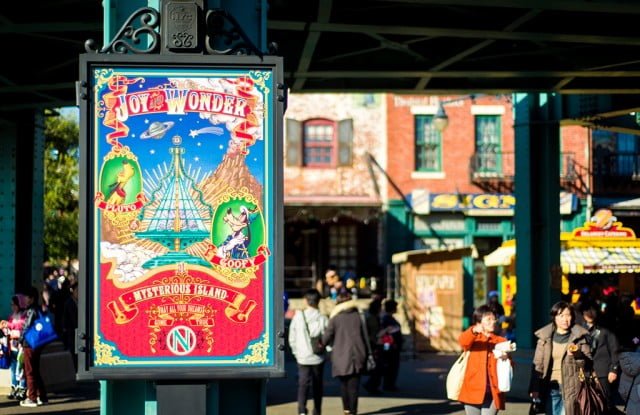 The trees are so awesome that there are attraction posters for them throughout American Waterfront. Can you say “Disney Details”? 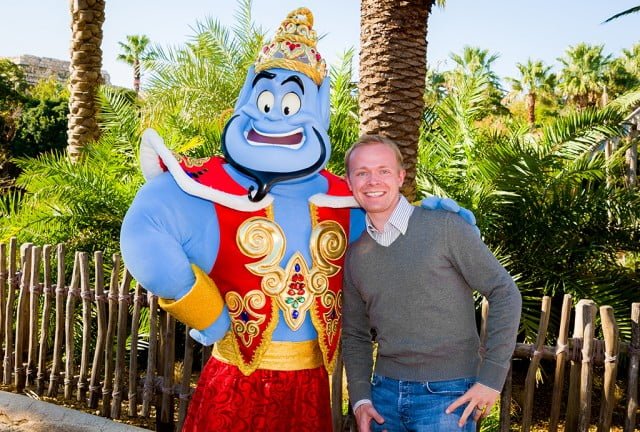 While cool, the traditional Tokyo Disney Resort custom of mobbing characters continues. Meet & greets of this nature are really difficult for Westerners, and if you’re not willing to be assertive, you have no chance of ever meeting the character.

Ambiance is conveyed in other ways, such as with the Tokyo DisneySea Merry Time Band, holiday background music, and little details. (There are even little mink fur Christmas teddy bears at the Teddy Roosevelt Lounge. Details!)

The Cape Cod area of American Waterfront is one of my favorite parts of Tokyo DisneySea, and this is doubly true at Christmas. It’s small and lacks an attraction, so it doesn’t receive the same fanfare as other parts of the park, but it has a quaint charm about it, almost reminiscent of New Orleans Square in Disneyland.

During the Christmas season, it has a welcoming warmth thanks to the beautiful lights and the great background music. Check out this Tokyo DisneySea walk-through video to see what I mean. Maybe it’s just me, and maybe it just reminds me of Christmas at home (even though I grew up in Michigan, not New England). I’m not sure.

Finally, there’s the merchandise and food. Tokyo DisneySea is always great for snacking, and during the Christmas season, there are some great options for that, plus special sets (meals) in the restaurants that typically include a seasonal dessert and main course.

We covered merchandise in the Tokyo Disneyland post, and it’s really no different here, save for lots of Christmas Duffy stuff. 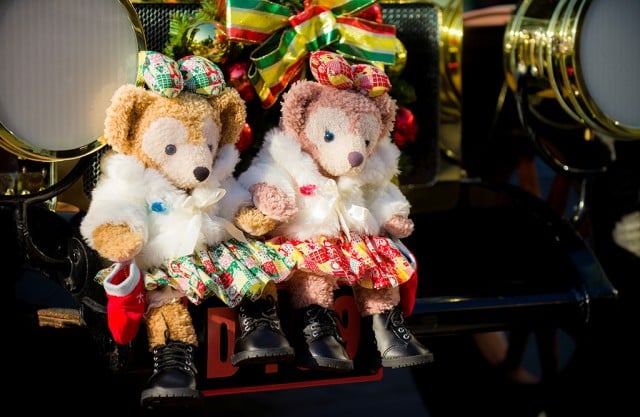 That about does it for our look at Tokyo DisneySea during Christmas! Hope this post has you wanting to check it out for yourself (or make a return trip if you already have). Make sure you check out our Christmas at Tokyo Disneyland post for photos and tips for the holiday season in that park!

Have you visited Tokyo DisneySea for Christmas? What do you think of the special trees they decorate for each port? If you have any other comments or questions about Christmas at Tokyo DisneySea, post them below and we’ll try to answer!

7 Responses to “Christmas at Tokyo DisneySea”